Can New York’s police learn to handle the mentally ill?

New York City Mayor Bill de Blasio announced on Monday a plan to overhaul how the city’s criminal justice system handles the mentally ill, more than 5,000 of whom are currently housed in city jails. The plan would create two “drop-off centers” where police would drop off mentally ill suspects as an alternative to jails or hospital emergency rooms. The plan also would provide better therapeutic care within jails and for prisoners re-entering society.

Under de Blasio’s predecessor, Michael Bloomberg, the New York Police Department resisted calls for more comprehensive training on how to work with the mentally ill, saying that occasional workshops taught by psychiatric experts were sufficient. But de Blasio’s plan, created in partnership with Police Chief William Bratton, calls for an initial group of 5,500 officers — approximately 15 percent of the force — to participate in an in-depth 36-hour mental illness crisis training program.

New York is the last of the nation’s seven largest cities to implement such crisis training for police, says Carla Rabinowitz of Communities for Crisis Intervention Teams in NYC, a coalition of organizations that advocate for the mentally ill. 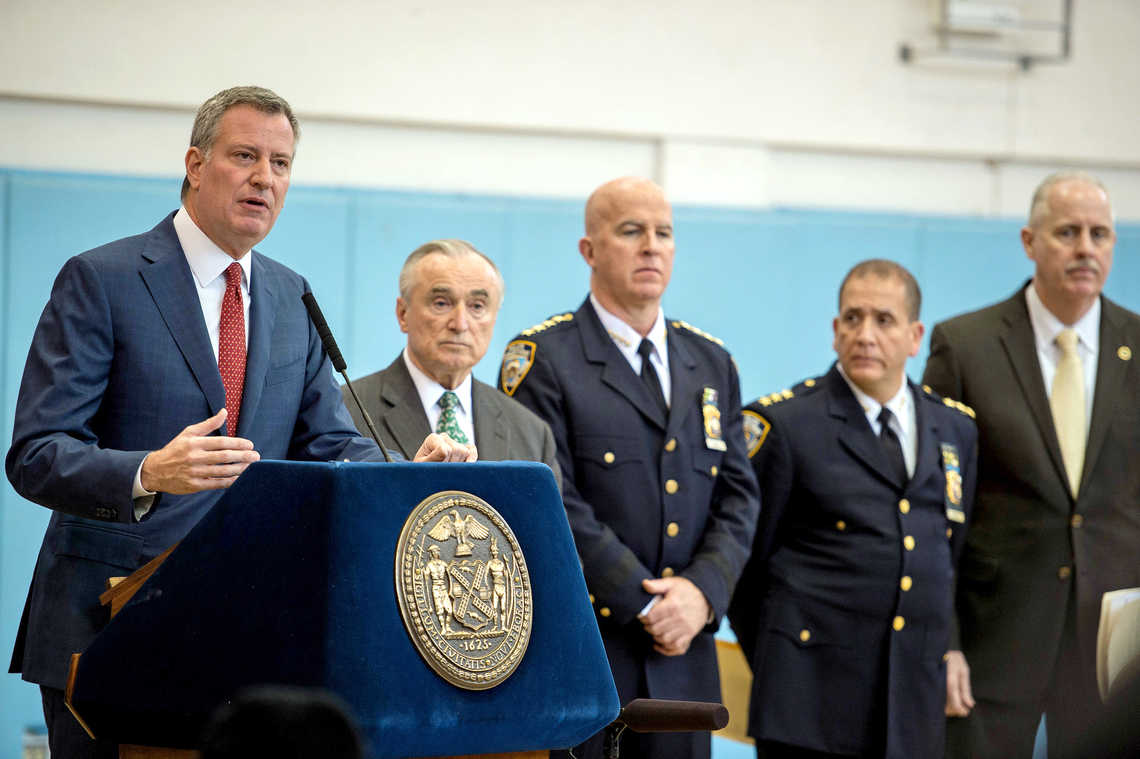 Dallas’ program, coordinated by officer Herb Cotner, is considered a national model. During Cotner’s weeklong course, officers participate in 17 typical scenarios in which actors pretend to be in the midst of a mental health crisis. Mentally ill and intellectually disabled members of the community speak with the trainees in small groups, so that officers can get comfortable with a broad range of disabilities.

One of the challenges, Cotner says, is the changing of officers’ mindsets. Although research shows crisis intervention training is successful in shifting police practices away from arrests and use of force, “cops were taught how to use defensive tactics to arrest a robbery or burglary suspect — verbal commands followed by physical force. But how do they recognize when they’re dealing with someone who is not a criminal? That the crisis is being driven by mental illness?”

“When someone is having a psychotic episode,” says Laura Usher, manager of the crisis intervention team program at the National Alliance for Mental Illness, “they may talk to the officer about delusions — things they are seeing or hearing that aren’t real.” Instead of shouting commands, crisis intervention training teaches that a lone officer (rather than a group) should approach the subject and use conversational tactics, beginning with the officer introducing him or herself by name.

According to research compiled by Communities for Crisis Intervention Teams in NYC, 92 percent of police officers in San Antonio have undergone crisis intervention training. In Houston, half of officers are trained, and in Chicago, a quarter. Cotner estimates that 30 to 50 percent of the officers at each Dallas precinct have completed his program, but he says that ultimately all patrol officers need crisis-intervention skills. “When incidents occur, we don’t always have the time to wait for the trained officer,” he says.

To get results in New York City, it is likely that more than 15 percent of officers will need this training — at least enough for every precinct to have a trained crisis-intervention specialist on duty during every shift, Usher says. Some cities have included crisis-intervention training in the curricula of their police academies.

There is also the worry that drop-off centers — just two, one in Manhattan and another in an outlying borough — will be overrun. Rabinowitz’s coalition initially asked the city for five such centers.

Still, de Blasio’s pilot program “is a wonderful first step,” Rabinowitz says. “Let’s just hope it gets implemented as soon as it can.”