The very sleep-deprived life of a corrections officer.

Claudia Cass squeezes her mother’s hand as they pull into a parking spot at the Derry District Court in New Hampshire one late September morning.

Cass has just finished her overnight shift as a correctional officer at New Hampshire’s State Prison for Men in Concord, where she spends upwards of 100 hours a week guarding medium- and maximum-security inmates. She has traded her blue polyester uniform for a dress, prepared to follow through on the “toughest decision” she has ever made: transferring legal custody of her 11-year-old son, Matthew, to her mother.

“I feel like a failure,” says Cass, 42, a single mother. Her work in the prison had become so overwhelming that Matthew was often alone, cooking his own dinner and seeing himself off to school. “I know I’m doing the right thing,” she says.

Prison guards are often characterized, whether in news accounts or movies, as living under some constant threat of mayhem. But for Cass and her fellow officers, the recurring nightmare is not a prison riot. It is falling asleep at the wheel after a series of 16-hour shifts. Or nodding off with your sidearm exposed while escorting a sick inmate to the hospital. Or even having to tell your child that you don’t have time to be a mother.

Corrections officers are stretched thin in many states, but New Hampshire may be the most extreme case. According to a 2012 staffing audit, Concord Prison for Men needs 371 officers to operate normally. It takes 277 just to maintain critical operations. After years of budget cuts and attrition, the current staff at Concord is 203. And the inmate population has continued to grow.

On at least a half-dozen occasions since May, Cass said, staff was so short she did the rounds on a 300-inmate floor by herself for the entire night. It’s the largest single housing unit in the state and includes the prison’s 96-member sex offender block. 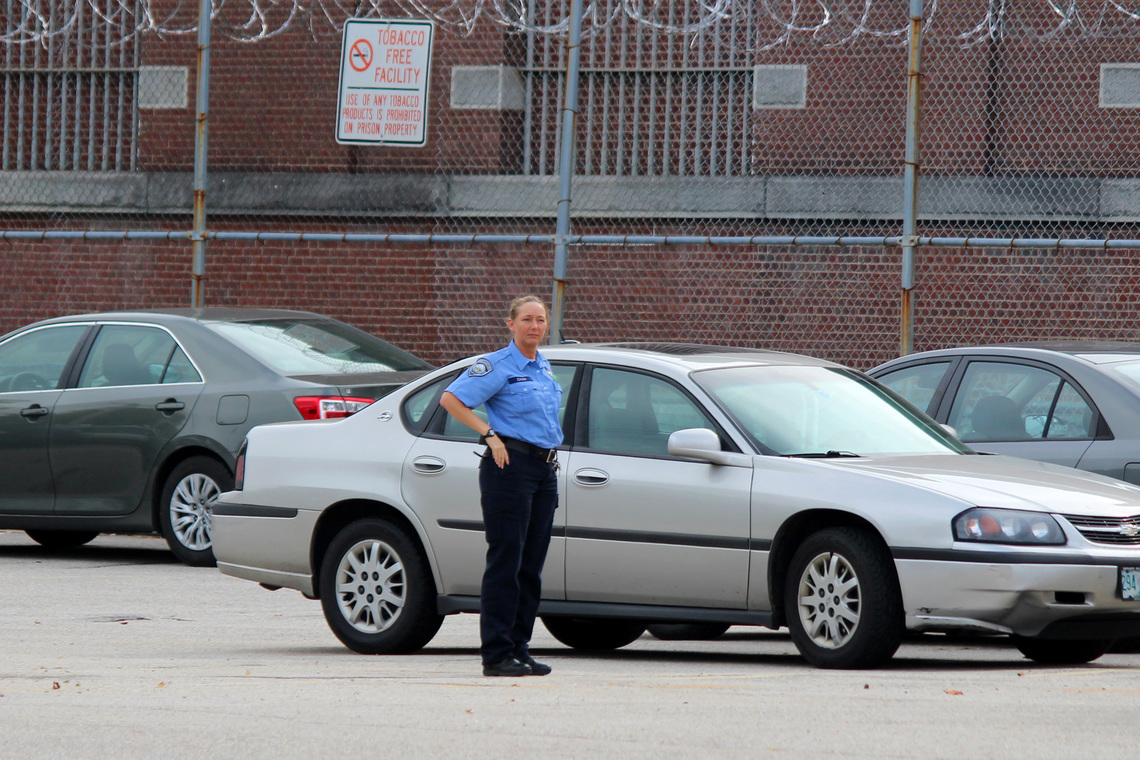 Cass outside the State Prison for Men in Concord, N.H.

Cass yells out her gender at least 30 times a night into pods of mostly sleeping inmates. It lets the prisoners know a member of the opposite sex has entered, as required by law.

Other than that announcement, Cass tries to keep the hourly rounds of her night shifts quiet. As she walks, she keeps a muffling hand over her keys as a courtesy to the sleeping inmates.

Cass has learned to treasure sleep.

She usually leaves for work around 10 p.m. for the 35-minute commute to the prison, and often doesn’t get back until 4 p.m. the next day. On a recent drive home from a double shift, she points out the landmarks of fatigue.

“This is a popular place to sleep,” she says at a stoplight about 15 minutes from her house. “This is another snoozy spot,” she says at an intersection a few minutes down the road.

She ticks off close calls with little emotion. There was the time Cass almost ran into a bridge abutment; the time she woke up barreling down an oncoming lane; the many times she’s pulled into her driveway with no recollection of driving home.

Sleep deprivation is a regular topic of conversation among officers. Stephen Sullivan, who often works with Cass, said he once sat on a sharp rock while driving because “pain keeps you awake.” Officers said colleagues have fallen asleep with sick or injured inmates at the hospital, one of the few times when prison guards are armed.

“We’re charged with protecting public safety, and we can’t when we’re dead tired or sound asleep with a gun,” said Cass.

New Hampshire’s Department of Corrections regularly requires employees to work 16-hour double shifts, sometimes four or five days in a row. This is particularly true for more recent hires who are not protected by seniority. Overtime is voluntary for more experienced officers, but only in theory: If you don’t sign up for overtime you are certain to be put on the “forced list” and assigned the most undesirable work, such as the solitary unit or the one-on-one suicide watches.

State officials concede that the cuts to the corrections budget are a false economy. For 2013 and 2014, the state allocated $6.5 million for overtime, but spent $12.4 million. This year, suddenly alert to the costs and risks of a threadbare guard staff, the state has stepped up recruiting, expanding job fairs and accelerating background checks for job applicants. The department recently made some headway, hiring a new class of officer trainees and making it so probation officers who used to work in corrections could volunteer for shifts. This has relieved some of the burden. But recruitment is still a challenge, and starting pay for a CO is $33,600. The most qualified candidates can make $10,000 more working for local police departments, jobs that come with greater prestige (and a vehicle). 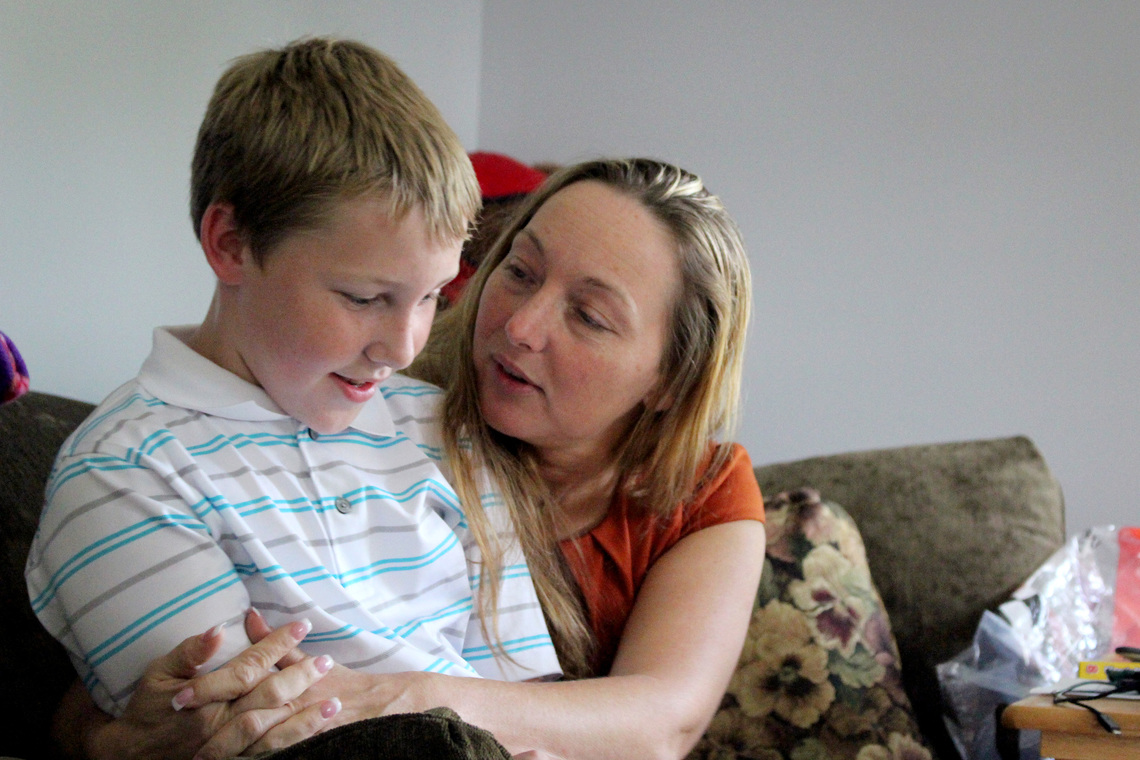 Cass with her 11-year-old son, Matthew.

For Cass, who ran away from home at 13, was pregnant with the first of her three children by 17, is three times divorced and never made it past eighth grade, the corrections job is a hard-won pinnacle of achievement, a source of pride. “I wanted my kids to look up to their mom,” she says. The benefits were appealing, too, and there was a prison in her town of Laconia, so the commute was short. That facility closed in 2009, and she was transferred to Concord.

Cass’ base pay is about $44,000, but with all the overtime, she earns up to $85,000 a year. It’s a giant leap from her earlier jobs on the graveyard shift of convenience stores and the assembly line at the Polyclad Laminates factory. But she works around the clock to earn it. Through the first eight months of 2014, Cass clocked almost 1,500 hours of overtime, equivalent to about 38 additional 40-hour weeks, on top of nearly 1,300 regular hours.

When she started to work long hours in the prison, her daughters helped with raising Matthew, but their lives have changed. Kaylee, 24, is now a mental health worker and Courtney, 21, is in nursing school with two sons of her own. Says Cass, “Their whole life, I said, ‘Don’t end up like your mother.'"

Cass calls herself a “nudge” and a “pain in the ass.” She insists there are many in management who despise her.

She is a union representative for the state’s correctional officers and has complained to members of state government, including Gov. Maggie Hassan, about the strains of the job. State Rep. Stephen Shurtleff, who sits on the New Hampshire House Criminal Justice and Public Safety Committee, describes Cass as “very vocal.”

Cass has found an unexpected source of sympathy in the cellblocks, from inmates who prefer a well-staffed order. Gordon MacRae, who has been a Concord resident for the past 20 years and is a member of the Inmate Communications Committee, said the guard shortage means inmates spend more time locked down, and there is less opportunity for schooling, counseling and other programs that can earn points towards parole. “Increased idleness is the biggest problem right now,” MacRae said. (Warden Richard Gerry, on the other hand, believes the dwindling guard force is frustrating but not critical. “I wish they weren’t working as many hours as they are,” he said, “but at the end of the day, I do think we have a safe and secure facility.”) 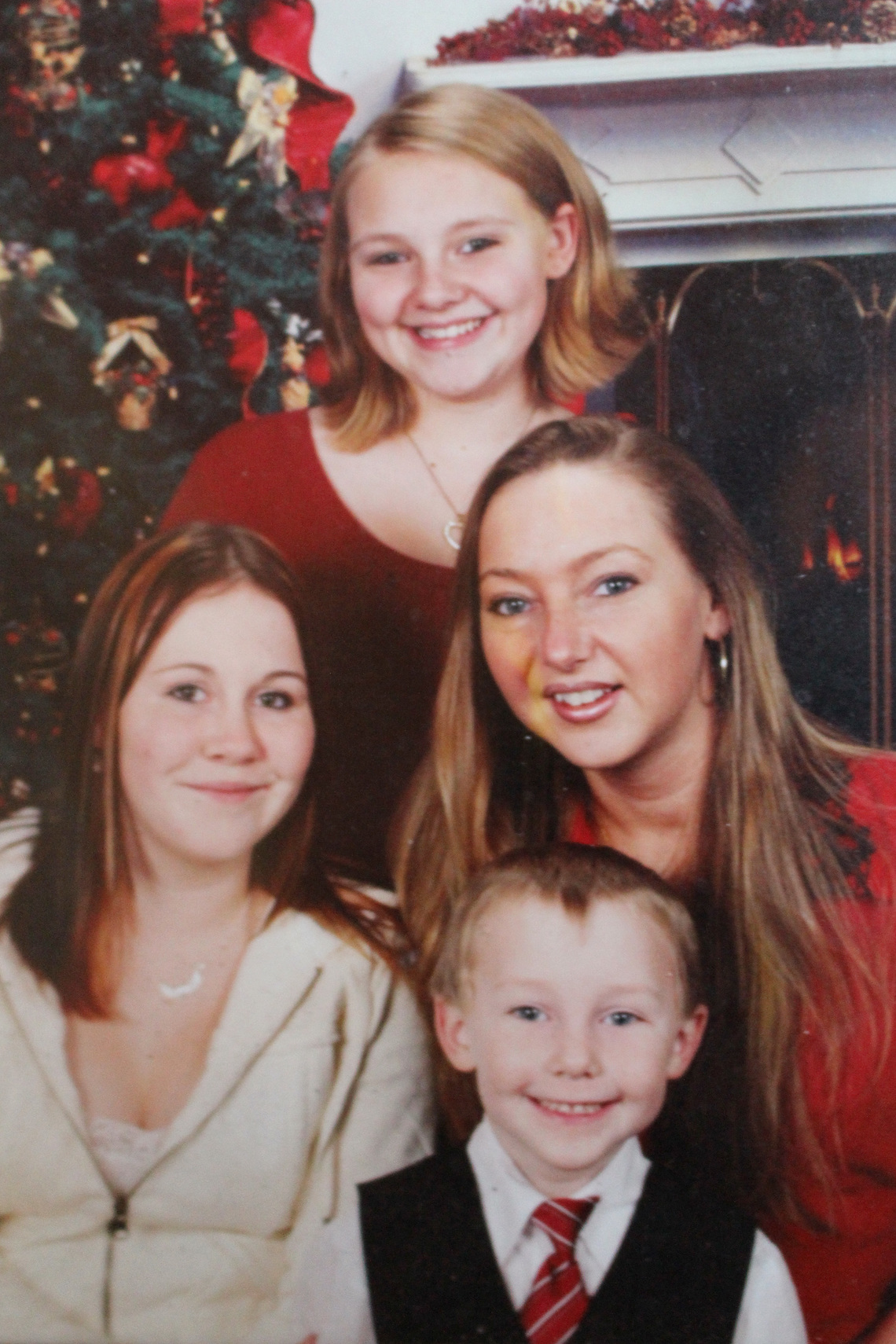 Cass with her children, Matthew, Kaylee, left, and Courtney in 2006.

Concord jams 1,500 prisoners into a space built for 1,250. Bunks line common areas, and some cells are filled to twice their capacity. Half of the inmates have histories of mental illness. Overcrowding plus understaffing makes for a volatile atmosphere. Inmate-on-inmate assaults have increased, the guards said. According to incident reports, homemade knives have been found on the unit that Cass guards, one under a sink, another hidden behind a bathroom tile.

Cass feels that while some of the inmates are protective of the female officers, others “definitely hate women.” Although she has never been attacked, she is acutely aware of the dangers and the ways understaffing compounds the risk. In July, while working a night shift alone, she was told the prison was too short-staffed to give diabetic prisoners their food and insulin. In an incident report documenting the episode, Cass noted that untreated diabetics are given to angry mood swings: “In my 302 inmates, I have [inmate name redacted]. He is a rapist and a diabetic. He is known to have uncontrolled violent outbursts from any disruption in his medicine schedule. This is the third time that this has happened…. This is becoming a real threat to the security. My security!”

At the prison, Cass is in charge. At home, everyone else seems to be. A neighbor does her laundry. Her boyfriend, Keith Cobbett, a former Concord guard who left because of the stress, often fixes her dinner. One recent evening, as Cass caught three hours of sleep before heading back to work, Cobbett filled her gas tank, cooked a pot roast and, a few minutes before waking her up, prepared a cup of tea for her.

Before he was sent to live with his grandmother, Matthew tended to his mother. Even when he was too tired to stay awake to see her off to work, he would leave her tea in the microwave and put her food in the refrigerator. If she wasn’t at work, the boy said, his mother was downstairs sleeping. After school he went to neighbors, “If they weren’t home, I had to try and figure stuff out by myself.”

At his grandmother’s, he has enrolled in a new school. He is alone less. “People around here have more time,” he said. All the same, he said, choking back tears, “I just wanted to stay with my mom.”

This story has been corrected. Kaylee is a mental health worker and not a full-time nurse. Additionally, Courtney has two sons of her own, not two daughters as was originally reported.

This story has been updated to reflect the current number of staff at Concord Prison for Men.