Silk Road1 An underground website which was most known as a place where users could anonymously buy illegal drugs and have them shipped to their home.
bitcoins (B⃦)2 Bitcoins are a digital currency that are created and held electronically. They are never printed, just stored and transferred from computer to computer.

In criminal cases like Ulbricht’s, law enforcement can seize and auction off any property — boats, cars, or even dinosaur bones — that they believe to have been used in illicit activities. The controversial practice, known as civil asset forfeiture, can net law enforcement huge sums of money; one Justice Department program seized assets totaling $4.3 billion in the 2012 fiscal year. (On Friday the Justice Department announced plans to reform asset forfeiture rules, but the Silk Road case is unaffected.)

On Jan. 15, 2014, in a separate civil action against Silk Road, the Manhattan U.S. Attorney Preet Bahrara ordered the forfeiture of the Silk Road server’s bitcoins, charging they had been used in money laundering. Silk Road customers could exchange the virtual currency for cash. (They could also use it to buy drugs, another in the litany of charges against the ostensible pirate.) It marked the first time a digital currency had been implicated in money laundering. This, clearly, is not your ordinary asset. For one thing, no other seized asset offered such a trove of potential evidence. Within the bitcoin public ledger is a vast amount of information identifying buyers and sellers, data which could potentially be used for future seizures and prosecutions.

But the Silk Road seizure also posed new problems for the feds: what to do with a virtual, volatile commodity. At the time of the seizure, the government did not even recognize bitcoins as a real thing, let alone a legitimate currency; the IRS later qualified it as property in March 2014.

Between the bitcoins found on Ulbricht’s laptop and those found on the Silk Road’s servers, the government had seized a total of B⃦173,991, or more than $33.6 million. By Jan. 27, 2014, the bitcoins had quadrupled in value. That is when the marshals’ Complex Assets Unit went to work.

The Complex Assets Unit, charged with handling the liquidation of assets like stocks and bonds, began collaborating with the FBI, the U.S. attorney's office in the Southern District of New York, and the Department of Justice to develop a plan to auction off the coins in blocks.

“Timing of the market, irrespective of the asset type, in an attempt to predict its peak is never a consideration in the pre-sale planning process,” according to a U.S. Marshal’s spokesperson.

But the timing did not end up working in the government’s favor. When the first auction was held on June 27 to sell off all of the Silk Road assets, the value of the bitcoins had already fallen 24 percent.

Price of a Single Bitcoin in U.S. Dollars from the Time the Silk Road Servers Were Seized to Present Day 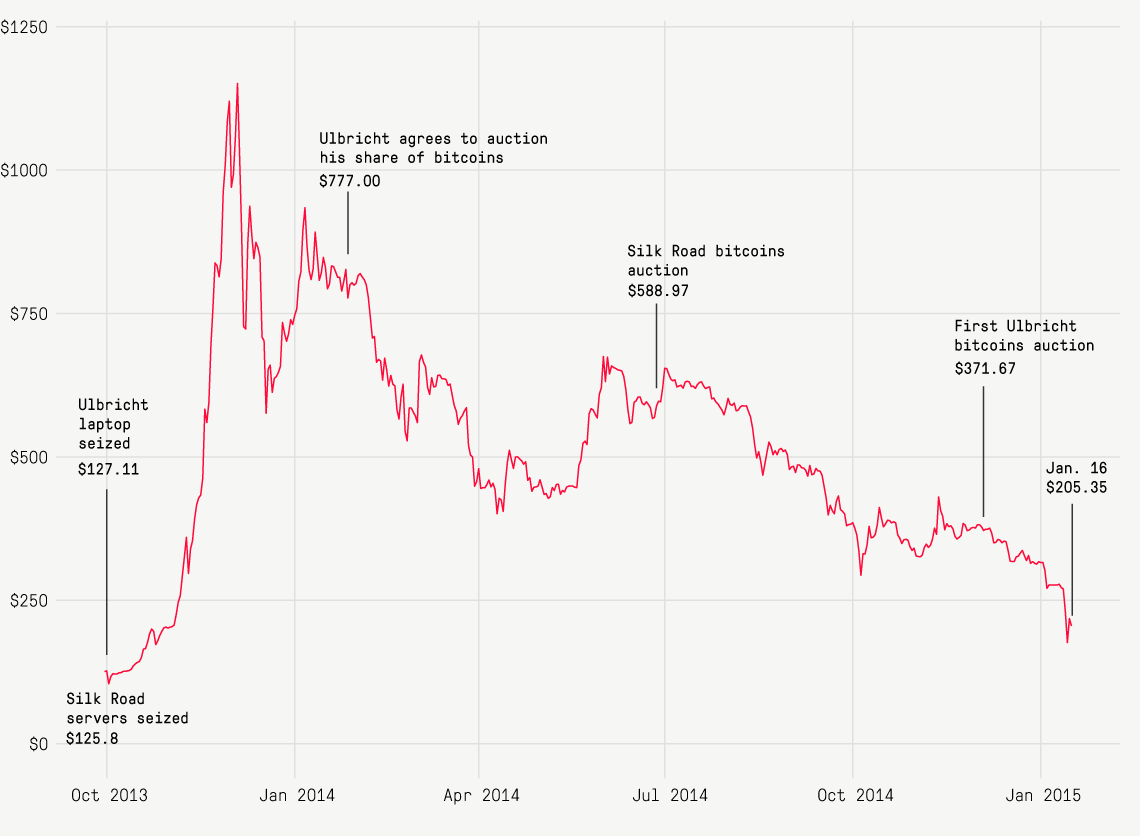 Nor did it work out so well for Ulbricht’s portion of the bitcoins. They were later auctioned off on Dec. 4, 2014 at less than half of their value relative to when he agreed to the auction.

"When [the government] takes an asset, they have to ensure it's not wasted or lost," says Larry Salzman, an attorney with the Institute for Justice, which advocates for asset forfeiture reform. "It's not negligence, it's just the market. It's just one of the hardships a property owner finds himself in."

Since last June, the marshals service has held two other auctions, the terms of which have not been disclosed. That still leaves B⃦94,336 of Ulbricht’s bitcoin fortune. As of this date, and only this date, that fortune is worth $19 million.