‘The Garb of Innocence’

Defendants may be presumed innocent — but can judges ensure they look innocent?

When jury selection began this week in the trial of James Holmes — the man accused of killing 12 people in a Colorado movie theater — he looked different than he had in prior court hearings. He traded his jail garb for khakis and a sport coat. Instead of wearing shackles and chains, he was discreetly anchored to the floor by a tan cable meant to disappear into the tangle of computer cords at the defense table. 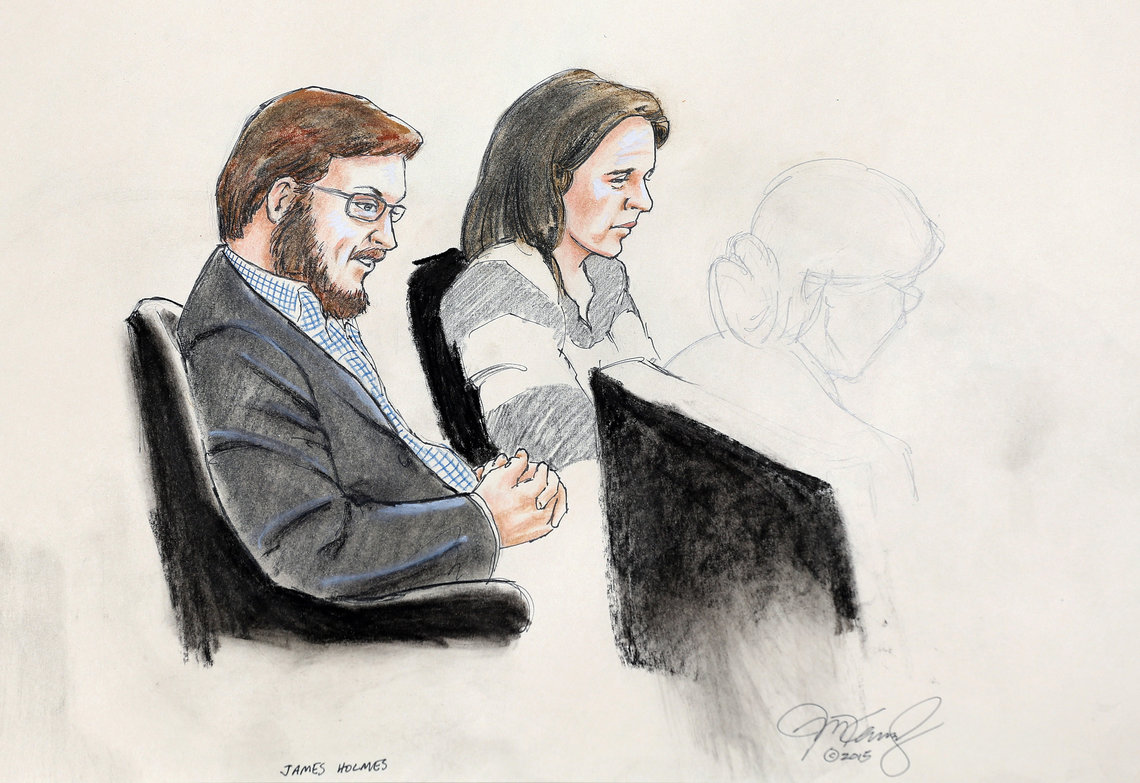 A courtroom sketch of James Holmes, left, with defense attorney Tamara Brady on the first day of jury selection.

That cable, which was attached to a harness under Holmes’s clothes, was the result of much legal volleying before any potential jurors arrived. His lawyers had argued that seeing Holmes in restraints would ruin his opportunity to be presumed innocent. Shackles and other extreme security measures (like the snipers posted on the roofs of nearby buildings) would give jurors the impression that “extraordinary security is necessary to contain Mr. Holmes,” they wrote, “and few things could be more prejudicial to a man on trial for his life.”

Dating back as far as English common law, courts have recognized that appearance matters — that being tried before a jury in an orange jumpsuit or in shackles could make the accused appear to be a dangerous criminal in the eyes of the very people tasked with deciding whether, in fact, he was one. For that reason, defendants in the vast majority of criminal trials are unshackled.

But the law does allow for exceptions if restraints are required to maintain an “essential state interest,” like courtroom security.

“More than likely what happens is, the defendant does something stupid prior to going to jury trial — like attack somebody. Or raises his voice or starts swearing in court or throws something in court,” says Lieutenant Steven Sikora of the sheriff’s office in Racine County, Wis., which provides security at the county courthouse.

That very courthouse was the site of one of the most extreme displays of courtroom restraint in recent history: In 2012, Sean Riker, convicted of more than a dozen crimes stemming from abuse of his wife and children, was wheeled into a sentencing hearing in a restraint chair, with a mask over his face, after he threatened to kill the judge and his family. “Is this your [expletive] idea, Merik?” he yelled through the mask, addressing the judge by his last name. “Make me look like a [expletive] clown?"

In a 1970 case, the Supreme Court affirmed that a judge can “bind and gag” an “obstreperous defendant…as a last resort.” (Judge Julius Hoffman famously did just that to Black Panther leader Bobby Seale during the 1969 “Chicago 7” trial.)

But these are rare extremes in what is already a relatively rare practice. More commonly, judges order defendants deemed dangerous to wear ankle restraints, and then use various means to hide these restraints from the jury. Courtroom tables can be draped with fabric to obscure the shackles from the jury’s view. A judge will send the jury out while a shackled defendant walks to and from the witness stand. In some courtrooms, Sheriffs use stun belts in place of shackles. The belts, worn underneath defendants’ clothing where a jury cannot see them, can be activated remotely by a nearby officer to jolt the wearer with 50,000 volts of electricity in case of misbehavior.

In court filings, Holmes’s lawyers argued that “Mr. Holmes has always been well-behaved in court and there has been no showing that adequate security cannot be provided during trial without Mr. Holmes being shackled.” The judge’s order acknowledges as much but notes that “the defendant has been accused of multiple violent crimes.” This was not cause enough for a judge presiding over another high-profile defendant: Timothy McVeigh remained unshackled during his 1997 trial.

If use of shackles during jury proceedings is rare, actual courtroom violence by a criminal defendant is even rarer. Courtroom security consultant Steven Swensen says there are about 125 assaults each year by defendants using makeshift knives, fists — even pens. As a fraction of the vast number of criminal proceedings each year, these add up to less than 1 percent. That said, “it’d be an injustice to do it by the percentage, because of what you’re talking about here,” he cautions. Most notably, in 2005, a man on trial for rape in Atlanta wrested control of a sheriff’s deputy’s gun and killed four people — including the judge — before escaping from the courtroom.

Whether, and how, a defendant is shackled is the result of a legal negotiation between the different parties. Often the initial concern for security comes from officials at the jail where the person is held before trial, or from the courthouse security staff. Sometimes prosecutors raise a concern about safety. Defense attorneys usually fight back, and after a series of legal briefs — or in-person debates — the judge settles on a solution.

In a 2011 Bronx case, Marcus King, on trial for attempted murder, periodically set off the metal detectors (known as magnetometers, or “mags”) on his way into the courthouse from Rikers Island each day. King’s attorney, Seann Riley, tried to argue that the intermittent alarms meant that the problem was with the machine or its operators, not the defendant. But the judge decided, “If he sets off the alarm, he’s shackled; if he doesn’t set off the alarm, he’s not shackled.” King spent several days of his trial with his hands in his lap, ankles and wrists cuffed, with what Riley describes as “big black plastic tarps over counsel table” to obscure the shackles.

Ultimately, Riley — convinced that the corrections officers were tampering with the detectors somehow — asked the judge to have all the parties watch as King went through the metal detector. “He did not set off the mags,” Riley recalls. “He did not wear shackles after that.”

The sentencing trial of James McVay, a South Dakota man who pleaded guilty but mentally ill last year in the stabbing death of an elderly woman, was the first time that public defender Traci Smith had a client shackled. Smith argues that the leg irons precluded him from receiving a fair trial. Despite the curtains around the tables, “jurors are human beings, they can still tell something’s up,” she says. “His movement is limited. You can’t cross or uncross your legs. If you do try to move significantly, they rattle.” (Some courts have begun using soft security restraints, or fabric-wrapped chains to prevent the jury from hearing the rattling sound.)

Prosecutor Aaron McGowan says the judge went to great lengths to hide the shackles from the jury, including making jurors leave the room any time McVay was to move from the defense table. “We don’t ask for leg shackles very often, except in cases where defendants make statements about wanting to continue harming people,” McGowan says. McVay, he says, “had made numerous statements about how he enjoyed killing and that it was his goal to kill, kill, kill again!”

McVay was sentenced to death, but he committed suicide before the execution was carried out.

James Holmes’s legal team seeks to persuade the jury that their client’s crimes were committed as a result of his longstanding mental illness. Under the law, he will have the best chance of a fair trial if he appears before jurors looking like an ordinary person. “The presumption of innocence requires the garb of innocence,” wrote a judge in another Colorado courtroom almost 70 years ago, “and regardless of the ultimate outcome, or of the evidence awaiting presentation, every defendant is entitled to be brought before the court with the appearance, dignity, and self-respect of a free and innocent man.”