How Much for Ted Bundy’s Toenails?

Inside the world of “murderabilia.”

On a true-crime collectibles site, Charles Manson’s unused tissue paper is on sale for $500. There’s also Ted Bundy’s personal copy of his own biography — available for the low price of $9,995. Those are just two of the over 1,500 items available on SuperNaught, one of the six online stores that specialize in “murderabilia,” a term coined by Andy Kahan, a victims rights advocate for the City of Houston. In the murderabilia marketplace, true-crime aficionados befriend the infamous and incarcerated, getting them to send anything from letters and artwork to fingernail clippings and locks of hair, which are then auctioned off to the highest bidder. In 2001, Kahan pressured eBay to drop its murderabilia items and has since successfully lobbied for the passage of “notoriety for profit” laws in eight states, which make it illegal for inmates to profit from the sales of goods related to their crimes. Implementation, however, hasn’t always been successful, and over the years, murderabilia sales have grown.

Kahan spoke with The Marshall Project’s Alysia Santo by phone about the bizarre things he’s collected, emerging murderabilia markets, and the federal legislation he thinks could put a dent in the industry’s profits. 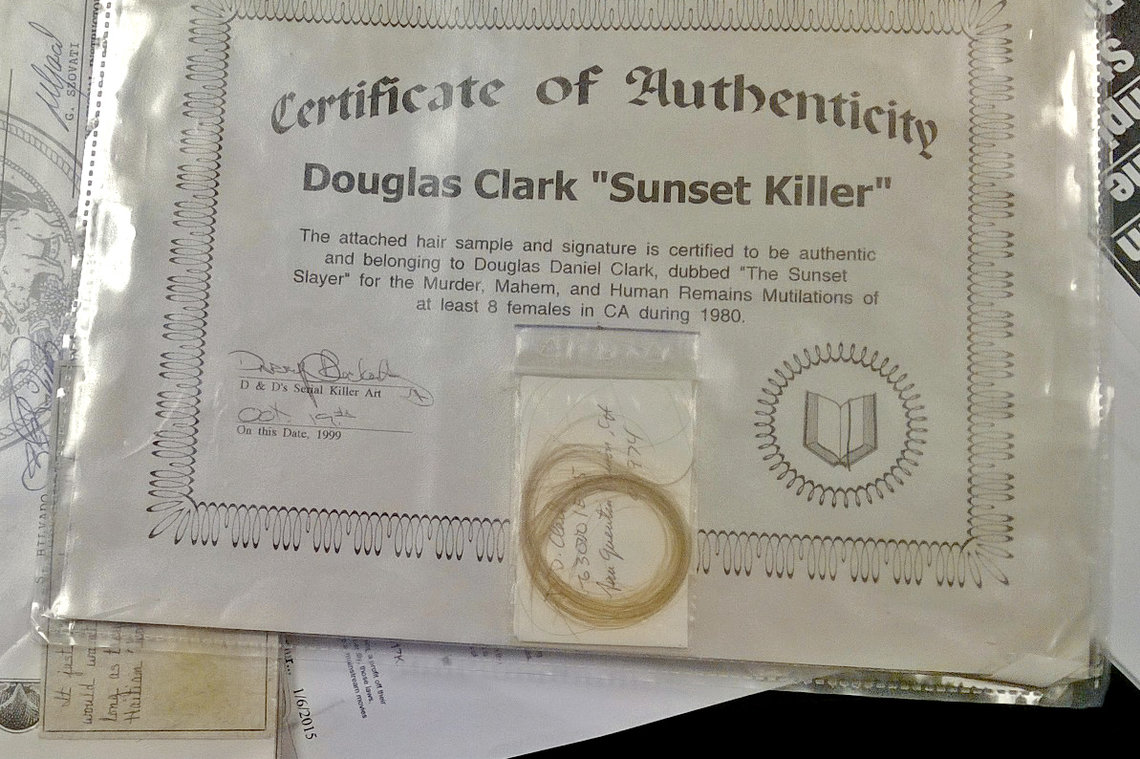 When you first discovered this industry in 1999, you didn’t yet know how these items were being bought and sold, and who was actually interested in buying them. How did you investigate this underground economy and what did you learn?

Initially, I became an avid buyer in the market. I would email a seller like I was some love-struck teenage groupie, and say, “Gosh this devil guy is quite scary. How did you get this from him?” And then I’d just wait for their response. I discovered this whole industry in which high-profile killers with name recognition were peddling their items through third parties.

Over the years, I bought a hodgepodge of items to bring with me when I do workshops and lectures. There’s a lot of letters, which I wanted because that’s where they discussed money arrangements. I also collected a lot of hair samples. For $15.99, I bought the hair of “Cross Country Killer” Glen Rogers1. I have $12.99 fingernail clippings of Roy Norris2, part of the “Murder Mack” team. I also have a letter and personalized stationery from Richard “Night Stalker” Ramirez3. That cost $34.99. For $20.99, I bought the prison-owned socks of Lawrence Bittaker4, better known as “Pliers.”

Glen Rogers1 Rogers claimed he killed close to 70 people (he later recanted). In the late '90s, he was convicted of killing two women and is the suspect in three other murders.Roy Norris2Norris, part of the “Murder Mack” team, was convicted of torturing and murdering five teenage girls in 1979, together with Lawrence Bittaker.
Richard “Night Stalker” Ramirez3Ramirez was an avowed satanist, and his highly publicized crime spree ended with his conviction on 13 counts of murder in 1989. Lawrence Bittaker4Bittaker, better known as “Pliers,” was partners in crime with Roy Norris, and earned his nickname from the torture techniques he used on his victims.

Have you personally ever been fascinated by serial killers or the psychology of someone who commits a particularly gruesome murder?

People are fascinated by the dark side. That’s human nature. I don’t think that will ever change. And clearly, this is a common interest, even for people who don’t buy this stuff. People like John Wayne Gacy, Ted Bundy, Jeffrey Dahmer — they are household names. But no one can ever name their victims. We give them infamy and immortality by continuing to give them a platform.

But even for me, as I progressed, I found myself becoming more interested in the perspective of serial killers. So I sent out 20 letters to high-profile killers all over the country, and I attached printouts of items sold, with their name and a little checklist at the end that read: Are you making money off of this? Are you aware of it? What do you think of it?

David Berkowitz5Berkowitz, also known as the “Son of Sam,” was convicted of murdering six people in 1976.

I heard back from some of them, including David Berkowitz5, who was very much appalled and shocked. He had written a lot of letters to people after he was first put in prison, and some of them were going for several hundred dollars a pop, which he didn’t know about. And Berkowitz asked if there was anything he could do help me. It’s a strange alliance, and he’s been a tremendous asset for me.

The push for laws to prohibit so-called “murderabilia” came soon after the conviction of Berkowitz for the Son of Sam killings, which had set off a bidding war among those who wanted to purchase the rights to Berkowitz’s story. However, the Supreme Court ruled that New York’s Son of Sam law was unconstitutional, and state statutes have been subsequently struck down. How are the reforms you’re pushing for different?

The primary reason most Son of Sam laws do not withstand constitutional muster is because the language mainly dealt with the issue of free speech. With notoriety-for-profit laws, you can paint, write, talk, or doodle, you just can’t profit from it. We zeroed in on the issue of profiting as opposed to free speech.

Versions of this have passed in Texas, California, Florida, New Jersey, Utah, Michigan, Alabama, and Montana, but the restrictions on profiting only applies to the inmates. I’ve been unable to find a way to legally go after the dealers. It’s had mixed success, because the law isn’t always enforced. Some of the dealers that were in Texas have shut down since the new law passed, but Charles Manson, who is locked up in California’s Corcoran State Prison, remains the biggest wheeler and dealer. He’s the top dog of murderabilia.

Jodi Arias6Arias was convicted of murdering her ex-boyfriend in 2013.

Jodi Arias6 has also emerged as a big seller. She has her own website, which is just amazing to me. She even uses her victim’s name, Travis Alexander, in one of her art pieces claiming that all proceeds would be going to an undisclosed charity that helps children.

Have you heard of instances where the money actually did go to victims?

James Holmes7Holmes is the suspect in the Aurora theater shooting.

Actually, about a week ago, a victim of James Holmes7 sent over a bullet shrapnel taken from her body to one of the murderabilia dealers, claiming she was in dire need of money for medical bills and asked the dealer to sell it to help with her expenses. If someone is going to be making money on this, at least it’s the victim. So that was a first.

You recently contacted Facebook to inform them that crime-scene photos of two women who were bludgeoned to death were posted on the site, and you were told by a spokesperson that graphic crime-scene photos did not violate their policies. As new markets continue to pop up, do you ever feel like you’re playing a game of whack-a-mole?

The issue of crime-scene photos is one that’s becoming more of a problem. In 2010, a 24-year-old graduate student named Meredith Emerson was abducted and murdered while hiking in a Georgia state park. The case got a lot of national attention. After the trial, a reporter for Hustler magazine filed a request trying to obtain the crime-scene photos for publication. And the people of Georgia went ballistic, for obvious reasons. They passed the Meredith Emerson Memorial Privacy Act, which states that the public can view crime scene photos but they cannot reproduce unless they get a court order.

Texas passed a similar law and then Connecticut followed up with their own because there were rumblings of people wanting access to photos from the Newtown massacre. Most of our battles over these laws were with the media. In Texas, the law exempts the media from some of those restrictions.

What about the argument people have a right to view, buy, and collect the things that interest them?

I’m a firm believer in free enterprise, but I think you’ve got to draw the line somewhere.