‘A System That Is Clearly Broken’

A Minnesota sex-offender program is under fire. How long can the state hold people for crimes they have not yet committed?

The phones in the Moose Lake, Minn. sex offender civil commitment facility have never been so busy as they were this morning. “Guys have been on the phone left and right calling their families. They’re breaking down crying tears of joy,” says Craig Bolte, who has been committed there for almost 10 years, since he was 19. “I always so adamantly believed that we would die here as old men and never get out.”

Today a federal judge ruled the program unconstitutional, both in the way it was designed and in the way it is run. “It is fundamental to our notions of a free society that we do not imprison citizens because we fear that they might commit a crime in the future,” wrote Judge Donovan Frank in a 76-page ruling. “The stark reality is that there is something very wrong with this state’s method of dealing with sex offenders.”

The ruling does not order specific fixes the state must put in place, but rather sets out a separate “remedies phase” during which the parties will hash out changes to the program. He “urges” many of the state’s top political leaders—including Gov. Mark Dayton, the House speaker, and the Senate majority leader, whom he specifically names—to attend the first hearing. “The time is now for all of the stakeholders in the criminal justice system and civil commitment system to come together,” the judge wrote.

In response, the governor issued a statement saying, “We continue to believe that both the Minnesota Sex Offender Program and the civil commitment statute are constitutional. We will work with the Attorney General to defend Minnesota’s law.” In defending the status quo, the governor demonstrates the very dynamic that Frank criticizes in his ruling: the program has become so dysfunctional in part because political leaders lack the incentive to institute reforms.

When Craig Bolte takes the stand in a Minnesota courthouse this month, he will tell a story that will not be easy for anyone to hear. Sexual abuse at the hands of his uncle. Multiple suicide attempts beginning at age four. Throughout his childhood, he bounced from treatment facility to juvenile placement to special schools. Then, beginning at age 10, Bolte did to a younger family member and four other kids what had been done to him. His parents, at a loss, called a state crisis line when Bolte was 14. “They wanted someone to teach me how I was hurting people, how I was affecting people,” Bolte says. “The Minnesota crisis line called the cops, and the cops came and got me. And I’ve basically been locked up ever since.” 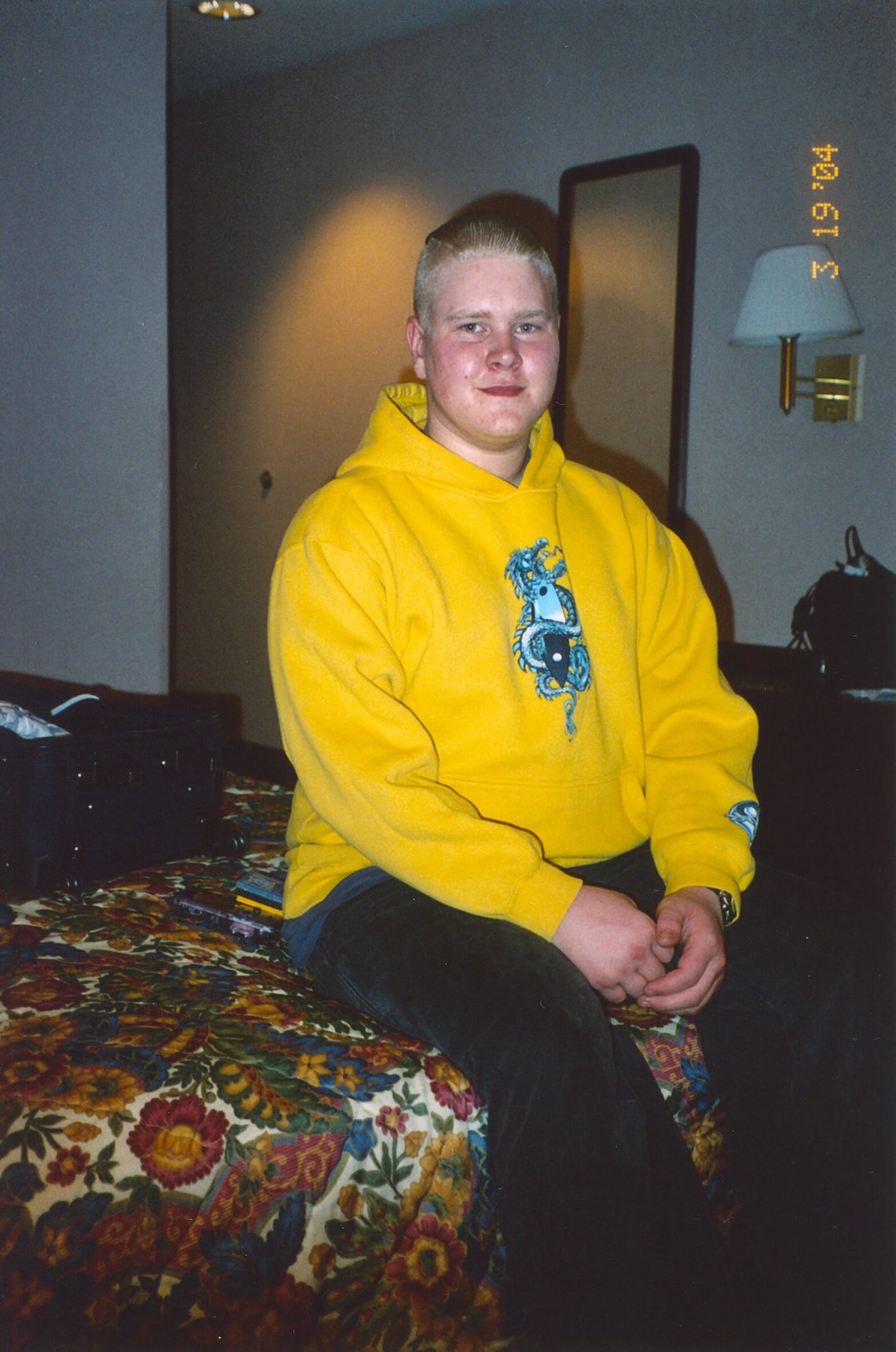 Courtesy of the Bolte family

Though he finished serving his sentence in a juvenile correctional facility at 19, the state deemed Bolte a “sexually dangerous person” and transferred him to a sex-offender civil commitment facility in Moose Lake, Minn. Twenty-eight now, Bolte is one of 14 plaintiffs named in a class-action lawsuit that goes to trial tomorrow, alleging, in part, that the state’s sex-offender civil commitment program is a de facto life sentence. More than 700 sex offenders have been sent there in the 21 years since the program’s inception. Three have left.

Twenty states and the federal government run sex-offender civil commitment programs, which provide states with a way to indefinitely detain people deemed sexually dangerous. Minnesota has the highest per capita commitment rate. Wisconsin, a neighboring state with a demographic profile similar to Minnesota’s, has committed some 500 sex offenders and has released about 150, with a focused effort in recent years to release more people. Of the three people Minnesota has released in the history of its program, one was returned for violating the conditions of his release (he did not commit a new crime) and two are out conditionally, under close supervision.

Despite the stereotype of the trenchcoated man lurking in the bushes, “sex offender” is a broad category that encompasses a wide range of behaviors. The most common are rape and child molestation, but crimes like groping, statutory rape, streaking, and, lately, sexting, are sex offenses, too. Public perception of the untreatable pedophile are also largely unfounded. There are a small number of dangerous, intractable predators, but in general recidivism rates for most sex offenders are actually lower than those for other violent crimes: between 5 and 15 percent.

“The fact is, there are thousands of people released every year from prison, and picking out from those thousands the 3 percent, 4 percent, 5 percent who are actually going to commit another sex crime in the next year, it’s impossible,” says Eric Janus, Dean of William Mitchell Law School and a longtime critic of the civil-commitment program. “To the extent we’re spending all this time and effort trying to find those few people who are going to be recidivists after being released from prison, that really addresses a teeny teeny portion of the sexual violence that goes on in our society.”

Rates of repeat sex offenses are especially low for those, like Bolte, who committed their crimes as juveniles. A panel of court-appointed experts in the Minnesota case found that of the 62 people committed for juvenile crimes, “most, if not all, of them should have never been committed…In general, it appears that the common theme for individuals in this subgroup of the class is that they were problematic children with histories of abuse — sexual and otherwise — and neglect,” the panel wrote in a report they submitted to the judge. “Their sexual conduct was used to substantiate a need for civil commitment in a situation in which officials seemingly did not know what else to do with them.”

Like registration and notification laws for sex offenders, civil commitment gained widespread traction in the 1990s, as high-profile crimes like the rape and murder of 7-year-old Megan Kanka horrified a nation already alarmed by rising crime rates. Beginning in 1997, and as recently as 2010, the Supreme Court has upheld sex-offender civil-commitment programs for people who “constitute a real, continuing, and serious danger to society.” But there is a caveat: there must be “no object or purpose to punish.” Retribution, the Court said, is a matter for criminal courts.

“You can’t punish people for crimes they have not yet committed,” says Daniel Filler, a professor at Drexel University’s Kline School of Law. Since people in civil commitment facilities have already served their time for past crimes, the purpose of the programs is to prevent future crimes. “So if what you’re doing is punishing them for being rapists, you can’t do that prospectively,” says Filler. “But if you’re adopting a rehabilitative law — it’s the same thing we do in traditional mental health settings — sure, you can put people into a mental hospital.”

Treatment in these settings, the Supreme Court warned, must be the real thing. “Treatment provisions…adopted as a sham or mere pretext,” Justice Kennedy wrote, would reveal “the forbidden purpose to punish.” This is exactly what Bolte and the other residents of Minnesota’s sex-offender program — known as MSOP — claim is happening there.

Clients must move through three phases of the treatment program before they can be considered for a move to the halfway house–style Community Preparation Services unit, and then for eventual release. But the expert panel found that moving to this less-restrictive setting is “almost impossible,” and that clients languish in early phases for years, at times demoted to earlier phases as punishment for acting out. Craig Bolte says his thinking has changed completely in the years since his offenses. “I’m not the kid that made those decisions,” he says. “My thought process is completely different. I didn’t have a grasp of how I was hurting and traumatizing people.” Yet he has been in Phase Two since 2012, and says that despite completing every therapeutic module that has been assigned to him, he never seems to move up. “As far as what I need to do to be a Phase Three, I have no idea,” he says.

The judge-appointed expert panel noted “high levels of learned helplessness and hopelessness, both on the part of the clients and the staff.” Their report detailed a culture in which there is no meaningful discharge planning, and “a ubiquitous belief that clients cannot achieve release, which likely affects both staff and client behavior.” The report praises the program for its facilities and says the research and theory that underpins its treatment programs are sound. “Issues arise more in implementation and fidelity than in theory,” they wrote.

A spokesperson for the Minnesota Department of Human Services, whose Commissioner Lucinda Jesson is the lead defendant in the case, declined to speak to The Marshall Project. But in court filings, the state focuses on the Constitutional standard that the plaintiffs must meet in order to prove that their rights have been violated. Was the state’s behavior “shocking to the contemporary conscience,” the state asks? “In the end, Plaintiffs have no evidence that any Defendant…engaged in egregious and conscience-shocking behavior required to establish a Fourteenth Amendment violation,” lawyers for the state wrote. “MSOP in fact employs experienced clinical professionals who exercise good-faith judgment and provide Plaintiffs comprehensive sex-offender treatment according with standard practices, even if they do not attain perfection in what everyone agrees is an extremely challenging field.”

Very few lawsuits filed by civilly committed sex offenders have been successful. This one was filed by the inmates pro se — without the help of a lawyer — and it was almost unprecedented that the judge appointed the plaintiffs a lawyer and allowed the case to go forward. Still, Dan Gustafson, the plaintiffs’ lead lawyer, stresses that “I don’t think the judge is going to swing open the doors and let 700 people out.” Rather, if he finds aspects of the program unconstitutional, he could order a special master to oversee changes, or order the legislature or the Department of Human services to make fixes. Early rulings indicate that he is deeply troubled by the program. “Without prompt action on the part of the legislature and DHS, MSOP’s reputation as one of the most draconian sex offender programs in existence will continue,” he wrote. “The politicians of this great State must now ask themselves if they will act to revise a system that is clearly broken, or stand idly by and do nothing, simply awaiting Court intervention.”

For Craig Bolte’s part, he’d like to go to college to learn the computer drafting software autoCAD. He’d like to learn to drive — he was too young for a driver’s license when he was locked up. “My biggest thing is, I just want to do what everyone else does. I want to go to college, I want to find a wife, have a family,” he says. When he first arrived at MSOP, Bolte says, he spent months just sleeping his days away. He’d wake up each morning thinking, “I don’t want to get out of bed, I don’t want to face this again. When does this end?” He even once wrote to his state legislator, he said, asking to be euthanized, since “it’s more humane than dying in here.” But suddenly things feel different. “The lawsuit is what brought my sense of hope back. There’s a lot of people here whose hope has come back because of this.”