Happiness is a family sleepover.

Ray Coles has a temper. It got him sentenced to nine years for battery, and prison continued to test his self-control. “I have little patience for ignorance and disrespect,” said Coles, 36, an inmate at the California Men's Colony in San Luis Obispo, California. But he stifles the urge to lash out at guards and fellow inmates because he knows it would jeopardize his “extended family visits” – quarterly private time with his wife, Vanessa, and their two young sons.

Related Stories
Conjugal Visits Why they’re disappearing, which states still use them, and what really happens during those overnight visits. Prison Personals How prison pen pal services became the new OkCupid.

The overnight visits, in a little house on the prison grounds, might sound like a grim rained-out vacation to most: TV, board games and tasteless, reconstituted meals. But for Coles, the chance to interact freely with his family every few months, outside the gaze of officers and inmates, reminds him of his long-term goal – to be approved for parole when he becomes eligible in May 2017.

"Having that physical connection with your wife is heaven – a complete escape from this negative life behind these walls," Coles said in a letter to The Marshall Project. The bliss of companionship, connection and touch "with the opposite sex is so rare that an inmate will go to the extreme to avoid bad encounters or situations," he said. "Every action or choice I make is made with my wife in mind.” 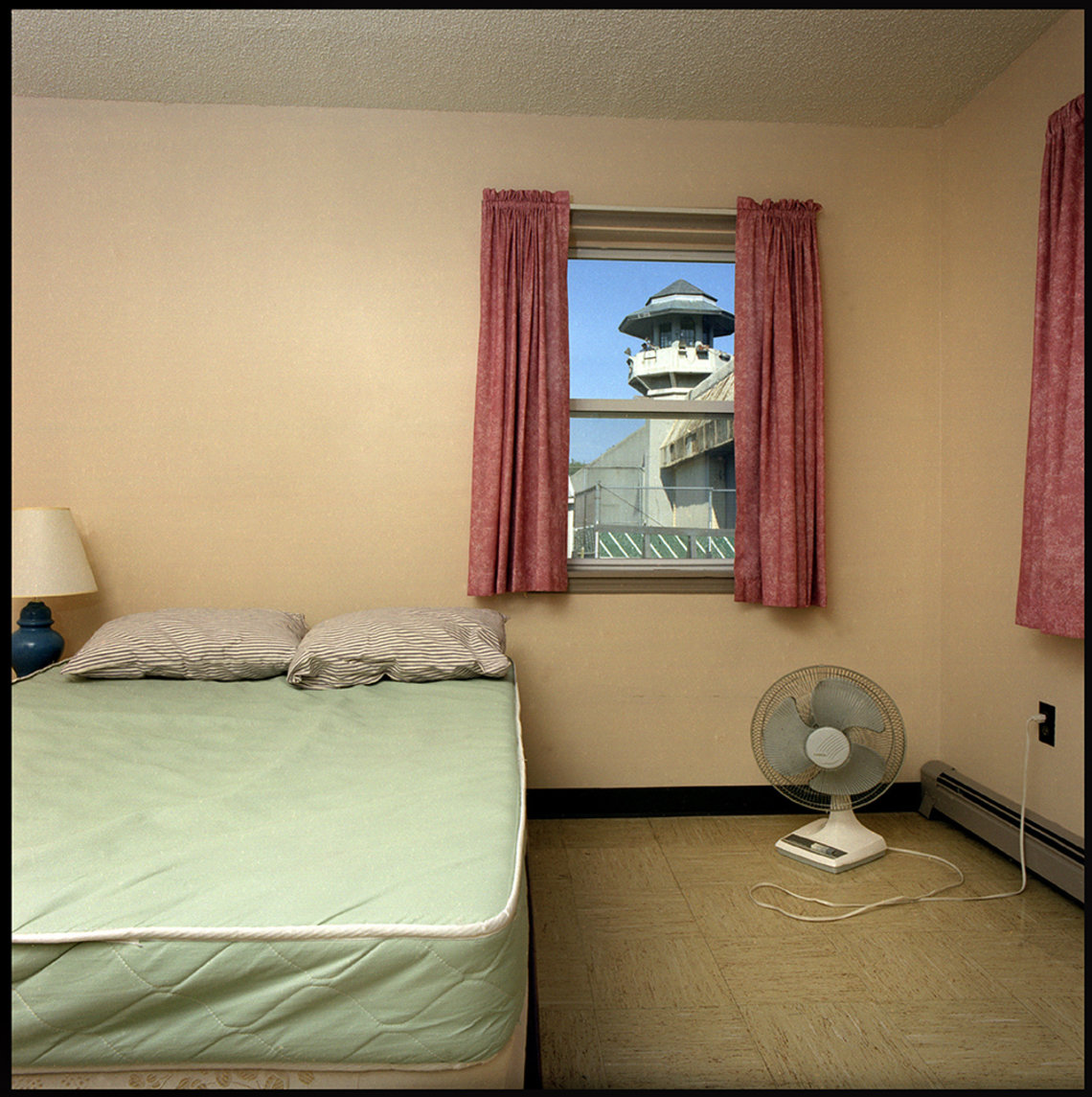 Coles is an anomaly. Despite considerable evidence that extended family visits, commonly called conjugal visits, lower dangerous tensions and contribute to rehabilitation, the practice is rare and becoming rarer. Mississippi abolished its program a year ago. New Mexico stopped family visits in May. That leaves only three states – Washington, New York and California – with meaningful programs. (Connecticut has extended visits at one prison, with only 15 inmates participating, and even that program is under review.) No federal facilities in the United States permit overnight family visits.

California’s Department of Corrections and Rehabilitation has permitted conjugal visits since the early 1970s. They are not available to lifers, death row inmates, sex offenders, those convicted of domestic violence or under disciplinary restrictions for violating prison rules. In 2007, following a lawsuit brought on behalf of a gay inmate and anti-discrimination legislation, the state added "domestic partners" to the list of those family members approved for visits. A department spokeswoman said the family overnights improve prison safety and maintain family and community connections that help ease inmates’ reentry into society.

But critics offer an array of arguments against visitation programs: that they are costly, unpopular with the public, and risk the spread of diseases or burdensome pregnancies. Data on costs is scant; New Mexico calculated the extended visits for two percent of its 7,000 inmates costs $120,000 a year. No one appears to have polled public opinion on the practice.

"Even though we provide contraception, we have no idea how many women are getting pregnant only for the child to be raised by one parent,” the Mississippi corrections chief, Christopher B. Epps, said when announcing the end of the program in December 2013. (Advocates say family visits for female inmates are more likely to include children and parents – rarely husbands – so that pregnancy is less of an issue.) Mississippi pioneered the practice of conjugal visits – which at first included prostitutes - to its black prisoners in 1918 on the premise black inmates were "naturally promiscuous and were in greater need of sexual outlets" according to a research paper submitted to the criminal justice program at the University of Southern Mississippi. White prisoners in Mississippi weren't permitted the privilege until the 1940s. Only 155 inmates out of its population of 22,000 prisoners were participating at the time of its abolition.

New Mexico abolished its program, according to corrections spokeswoman Alex Tomlin, after a study concluded that it did not reduce recidivism. When asked for the study, Tomlin said a formal report did not exist: "We looked at (the records of) individual inmates, is my understanding," she said.

What works in New York state may not prove successful in New Mexico, continued Tomlin: Most of New Mexico's inmates, she said, "have less than a high school education. Most are Roman Catholic, most are Hispanic, and on their fourth, fifth or sixth conviction," and more likely to be wedded to a gang than a spouse, she said. Contraband can be smuggled into prisons during extended visits, and it makes sense to use prison resources on programs that will benefit the most prisoners, she said.

Conjugal visits “may be more beneficial to maintaining already functional families than addressing the needs of a dysfunctional family,” wrote Reginald A. Wilkinson, then director of the Ohio Department of Rehabilitation and Correction in a June 2003 article in Corrections Today. Conjugal visits not only increased the risk of "spreading sexually transmitted diseases by an already identified high-risk population," but unsupervised visitation could put family members at risk of violence. Providing facilities that allowed private visitation to occur in a "dignified, yet secure, manner," was too costly, wrote Wilkinson, concluding, "Ohio has not found that the benefits outweigh the disadvantages and financial cost to prison administrators, families of offenders and the community."

In its resistance to conjugal visits, the United States is “an outlier,” said Heather Ann Thompson, an associate professor of history and African American studies at Temple University, who has researched prisoner rights. Canada, Qatar, Turkey, Saudi Arabia and many Latin American are among countries that permit them. "Notably, Costa Rica, Israel and Mexico allow them for homosexual prisoners," she adds. While they are banned in Great Britain, they are allowed for eligible inmates in Spain, Germany, Denmark and Russia.

Thompson cites reports showing that extended family visits justify their costs by cutting recidivism and improving inmate behavior. A study of the family reunion program in New York State published in 1982 by Corrections Today showed that prisoners who participated had a 67 percent lower rate of recidivism than those who did not. The Minnesota Department of Corrections concluded in 2011 that "Revisiting visitation policies to make them more 'visitor friendly' may therefore represent a relatively low-cost, potentially high-benefit measure that correctional systems could take to help ease the burden of prison overcrowding and budget deficits." Minnesota abandoned extended family visits 30 years ago, “due to a variety of security and contraband issues,” a spokeswoman for that state’s corrections department said. “We are currently working to provide video visiting to address distance concerns.”

While there are costs associated with extended visits, families and inmates pay a significant portion. (Coles' wife, for example, totes in her family's linens and pays $90 - $100 for the family's pre-ordered food each time she goes.) Family members wishing to participate undergo rigorous screenings, background checks, and inspections and searches before being permitted to spend the night. Vanessa Coles must not only present her marriage certificate each time, but also hand over her birth control pills to be doled out by prison staff.

To minimize the risks of sexually transmitted disease, New York and Washington have elaborate prevention protocols requiring testing, counseling, and disclosure to a spouse or domestic partner before a superintendent will approve a visit including the possibility of intimate contact.

Stewart J. D'Alessio, a professor of criminal justice at Florida International University, concedes that conjugal visits may mainly serve to preserve functional families – but that in itself helps make society safer. "The studies show generally that getting married and having a family reduces recidivism and lowers criminal involvement,” he said. “It increases your social capital: You have a vested interested when you have a wife and kids in not going to prison. You have a stake now."

D'Alessio is the lead author of a 2012 study showing that the sexual violence rates in prison were 75 percent lower in states where conjugal visits were permitted. D'Alessio says the existence of extended family visits might be an indicator that an institution embraces other enlightened rehabilitative practices as well.

Arthur Leonardo, a retired warden of New York State's Great Meadow Correctional Facility, attributes hostility to extended visits to a punitive attitude in the American public. "There's this feeling that we shouldn't be doing anything for them," said Leonardo. Voters, he lamented, "get upset when they find out inmates get health care! Health care is a curse word!" While the public may seek satisfaction in vengeance, the reality of rehabilitation is that reform is often best achieved via a system of rewards and incentives than ever harsher punishments, said Leonardo, who retired in 1999. The "family reunion" visits in Great Meadow, he recalled, "certainly encouraged them to keep clean disciplinary records and stay out of trouble," and staff generally supported their existence as well, he recalled. "We don't have much to give to people in prison," he explained. "If you don't have anything to take away from someone, you don't have anything to take away to urge them to do the right thing," he said.

Not all prison administrators welcome the idea of family overnights. But wardens with experience overseeing such programs are most likely to believe that they lowered the risk of violence and maintained family stability, according to a survey of 226 wardens published in The Journal of Correctional Health Care in 2002. Wardens with more education were also more supportive.

All visits are helpful, but family visits are particularly effective in reforming people with antisocial behaviors. Family – the kinship that many young men seek when joining gangs – is a potent behavioral transformer. "Those people are out there and available when you get out," Leonardo explained. "To have someone who loves you and will help you, and in the case of children, people who depend on you," is, for most people, a more powerful incentive than threats and orders from authority figures with whom they have no emotional connection, Leonardo explained.

Vanessa Coles, who met her husband 12 years ago in a vocational school they both attended, said that being with her husband and watching her five- and 11-year-old sons play with their dad is worth the five-hour drive. “The little one needs it because that’s all he knows,” she said. “The older one needs it to remember what he knows.”

She acknowledges that the visits are not exactly repeat honeymoons. But they do take her husband's "mind off being in prison and my mind off being a single mom…. It keeps our bond going, keeps our marriage strong and keeps him on track."

"They're being punished: I get it!" Vanessa said. But "destroying your marriage and family should not be a part of your sentence."

Has your partner been in prison? Help others understand what the experience is like by filling out our questionnaire.