Why Is the FBI so White?

The nation diversifies. The bureau, not so much.

Richard Garcia, the FBI assistant director in charge of the bureau’s Los Angeles office, was unfazed to learn in 2005 that the agency had agreed to cooperate in the making of a Hollywood film based on his work managing a rogue agent who was suspected of being a Russian spy. Garcia was two months from retiring, and says he "had already seen it all."

Four years earlier, the bureau’s counterterrorism division had assigned Garcia to keep a close eye on an agent named Robert Hanssen, an operation that ended with Hanssen serving a life sentence in a federal supermax prison on espionage charges.

But Garcia was nonplussed when “Breach” was released in theaters in 2007. The Mexican-American law enforcement veteran — proudly the highest-ranking Latino in the FBI when he retired — was portrayed by the unmistakably Anglo actor, Gary Cole.

“They made me white,” Garcia says.

Hollywood may have gotten Richard Garcia wrong, but it got the FBI right. The bureau has historically been the least diverse of the major federal law-enforcement agencies, and, according to a recent breakdown of the FBI’s 13,455 special agents, decades of lawsuits and promises have not moved the needle on diversity. 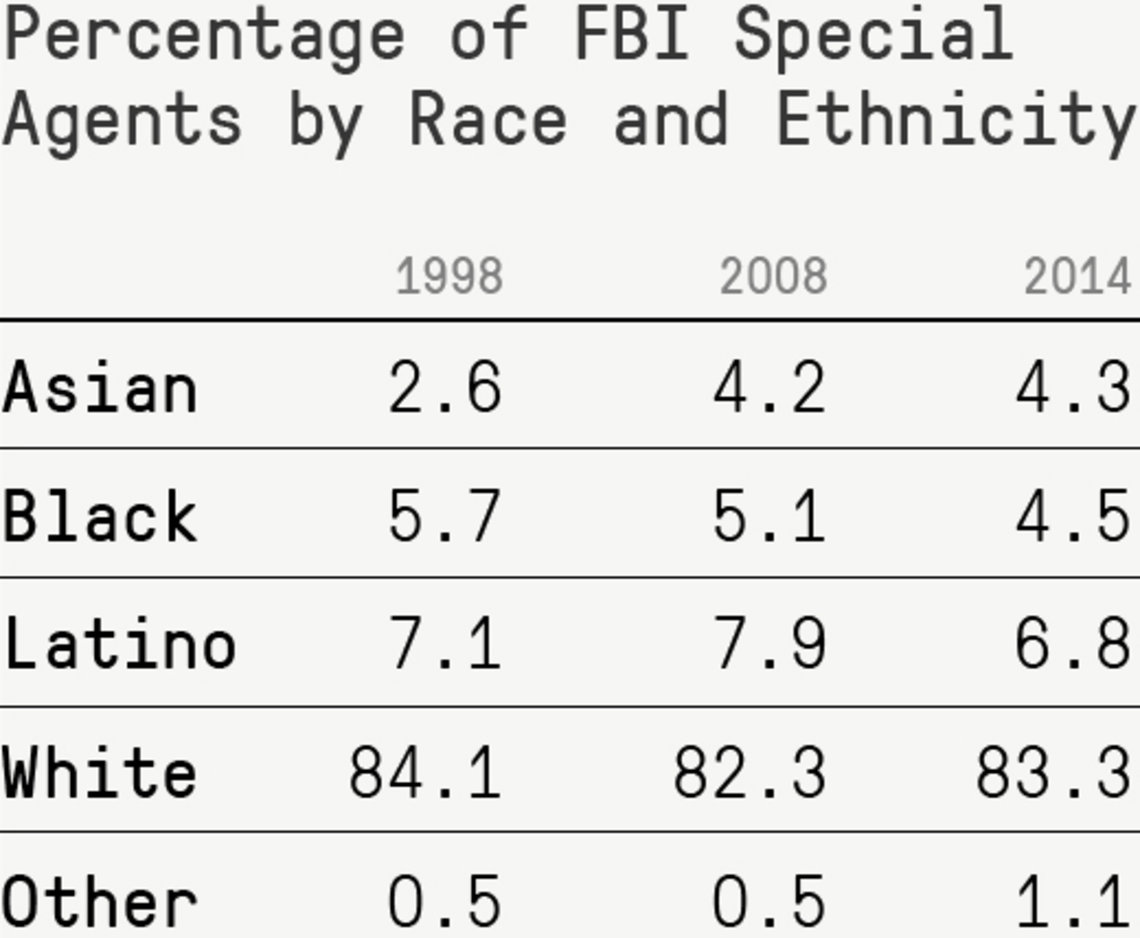 The higher you go up the agency ladder, the less likely you are to encounter men like Richard Garcia. Latinos make up 2.8 percent of the high-level managerial positions in the agency, according to an FBI spokeswoman. (Blacks make up 5 percent, and Asian-Americans are 2.5 percent.)

FBI officials acknowledge that these figures are embarrassing at a time when the president and his top law enforcement official, Attorney General Eric Holder, are black men, and the nominee to be the next attorney general is a black woman.

“The FBI is overwhelmingly white and male among my agent force,” FBI Director James Comey told an audience at Georgetown University last month, Politico reported, after a speech lamenting mistrust between white police and black communities. “I have to change the numbers.”

The bureau is in the midst of a new “targeted” recruiting strategy, says James Turgal, Comey’s new head of personnel. According to Turgal, the agency has expanded the list of schools where it recruits to include dozens of colleges with large minority enrollment. He also sends staff to black, Latino, and Asian organizations that cater to lawyers, MBAs, and other professionals.

“I need diverse special agents to go out into all of those diverse communities, out in the public, all across America to investigate crimes,” says Turgal. “I am doing everything that I possibly can.”

Rookie agents, who earn an income similar to a public school teacher (starting salary ranges from about $40,000 to $50,000), face more rigorous vetting than applicants for most law enforcement jobs. Only one out of three special agent candidates pass the bureau’s scrutiny, Turgal said.

And some of the standards are harder for minority candidates to meet.

Blacks and Latinos are less likely to have the required four-year college degrees, according to U.S. Department of Education. They are also less likely to have high credit scores, and more likely to have a criminal history— red flags at the FBI. Candidates with family or friends who are undocumented immigrants or have felony convictions undergo tough questioning.

Also, the bureau insists that new agents move to another city upon hiring. According to Garcia, the residency rule is a deterrent for Latinos, whose cultures may place a premium on staying close to their extended families.

“This problem is more complex than people realize,” says Michael Mason, a black man who retired in 2012 as the FBI’s fourth-in-command. Mason, 57, was the bureau’s executive assistant director and oversaw the agency’s criminal investigations.

Mason says the preponderance of white males in top positions is self-perpetuating: Few minorities have the power to promote lower level agents to the bureau’s middle and senior ranks. The lack of diversity, Mason argues, affects recruiting and the distribution of plum assignments.

“I do believe the FBI has to make a good faith effort,” Mason adds.

The FBI and other federal law enforcement agencies have been targets of several lawsuits dating back to the 1980’s by black and Latino agents alleging that the bureau operated a “dual-track” hiring and promotion system based on race. "White people promoted people who were white, who promoted people who were white, and so on,” said the lawyer for 500 current and former black FBI agents and former agents after their bias suit was settled in 2001. The agency vowed in that settlement to overhaul its recruiting and promotion practices.

“You can’t just show up at an NAACP conference or a job fair and strike up a relationship,”says Gerald Chapman, 68, a retired high ranking DEA black agent who held top positions in the agency’s Connecticut and New York City offices. He is now a contract analyst with the FBI and has a 30-year-old son who is a DEA intelligence officer.

This article has 2 letters to the editor. Read the letters.
Tags: →Race →FBI →Racial Disparities