‘They Didn’t Believe the Camels Were Ours’

What a journalist’s seven-year walk around the world reveals about global policing.

To retrace humankind’s migration out of Africa, American journalist Paul Salopek is walking around the world, starting in Ethiopia and ending in Tierra del Fuego. His journey is the ultimate exercise in slow journalism, allowing him to canvass secluded reaches and capture remote voices, all at three miles an hour. He is now on the third year of his seven-year, 21,000-mile trek – and so far, he has been stopped by police and various security forces 42 times, all of them charted. In this email interview, we asked Salopek about policing and criminal justice, exploring parallels between what he sees in the United States and internationally. 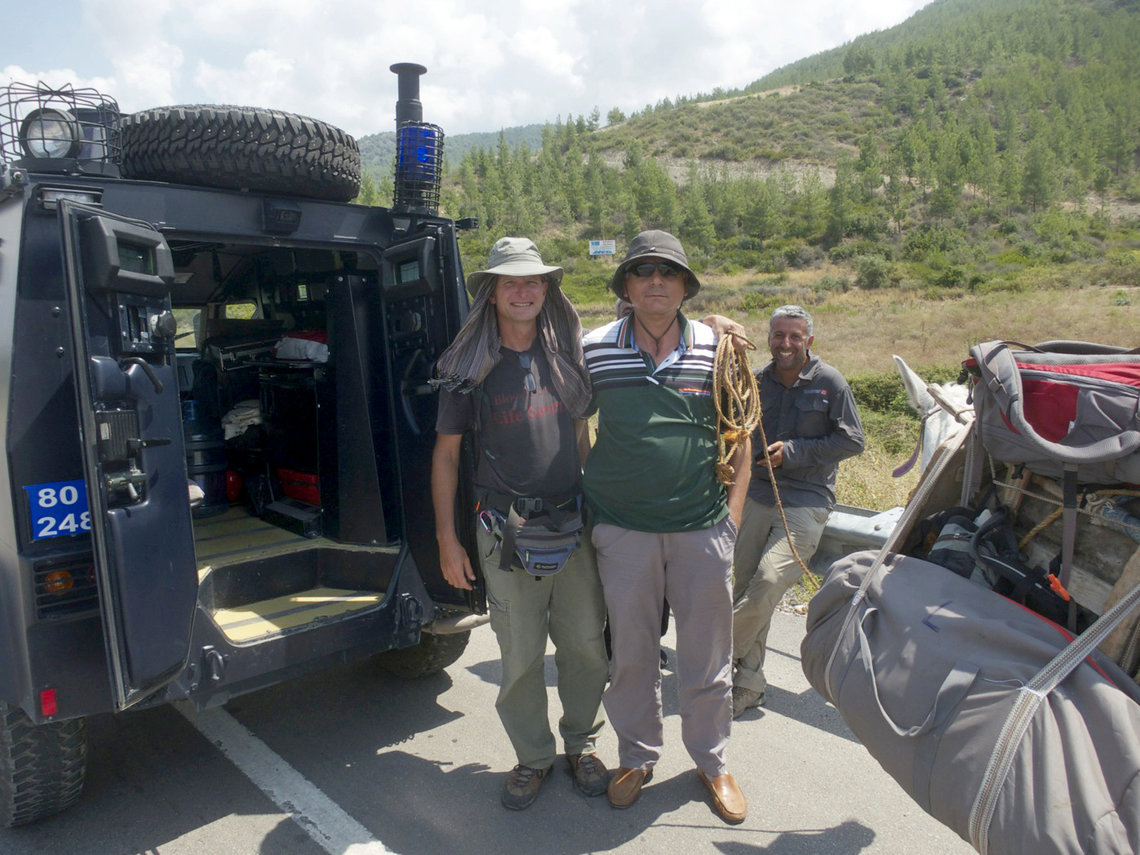 Paul Salopek, left, with an anti-terrorist police officer after being stopped with his guide, Deniz Kilic, right, on the outskirts of Osmaniye, Turkey.

A former farmhand and commercial fisherman, Salopek twice won the Pulitzer Prize with the Chicago Tribune; in his career, he has traveled the Congo by canoe and Mexico by mule, and was imprisoned while reporting on the conflict in Sudan. We caught up with him in Georgia (the country, not the state), where, he writes, he is “waiting for the mountain passes in the Caucasus to thaw. I will set out in the spring, heading east along the old Silk Road Routes for China. … I'm renting a small flat in the old city of Tbilisi. Cobbled streets tucked into mountain folds next to the Mtkvari River. The city has a lot of stray dogs, and they take themselves out for walks.”

How is a police stop in Ethiopia or Jordan different from one in Chicago?

As always, societal context—whether macro and micro, whether experiencing police interactions as an outsider or insider—is everything.

I’d venture that a solid majority of Americans appreciate their police forces as agents of good. If your house gets burgled, you dial 911 reflexively—with hope, with expectations of help, with relief. But I grew up in 1970s Mexico. The police there were the last people you wanted to summon when a crime was committed because they were corrupt. There was a slang term for their badges: a ‘charola’ or tray, as in the place you left a tip. If police stopped you, you dreaded it, because bad things would happen to you. Another crime was about to be committed—by people in uniform, against you. You never dialed 911 short of being targeted for murder, and maybe not even then.

So I’m not typical. Outside of mundane traffic stops, police in Chicago or any other American city have never detained me. I have almost no experience with police anywhere in the United States. This is partly because I spend no time anymore in my home country, and partly because of my demographic: I’m a white guy of a certain age who generally wears laundered clothing. I’m not an 18-year-old African American male from Ferguson. My upbringing in a Mexican polity where police forces were criminal and operated with impunity, however, has left a deep and abiding impression from childhood: I have always carried a wariness of police. I’ve had relatives who served. One was even a police chief. I started my career in journalism as a young police reporter, and I made many friends in the department that I covered. Police work at its best is idealistic, if rough and often thankless, and from what I saw during my reporting, also psychically bruising. But I remain anxious and uneasy around police.

The police I’ve encountered on this walk, in Ethiopia and Jordan, have been correct with me. No complaints. They operate in tough neighborhoods: the Horn of Africa, the Middle East. I didn’t closely fit their profiles of a suspicious character. Plumb crazy, maybe—slogging around the desert with cargo camels and mules. But not genuinely dangerous. I was stopped seven times in one day in Jordan—a record—but that was because I was walking next to the Israeli border, a security zone. And the police were more interested in my walking partner, Hamoudi al Bedul, a marginalized Bedouin. He was petrified of them. What does that tell you? What it tells me is that I always was aware of my privilege. My outsider’s neutrality. My passport. My economic status.

How much do cultural views about the treatment of guests have to do with the way that the police treat you?

It’s huge. In fact, as highly professionalized, formally trained and clinically egalitarian as US officers may strive to be, I find American law enforcement’s steely mask of quasi-military opacity—“Get out of the car, sir,”—to be more daunting than the human approaches I’ve experienced with less economically endowed police forces overseas.

Africa, the Middle East, Turkey, Georgia—all these places share tremendous cultures of hospitality towards foreigners. This naturally extends to interactions with police. There is no question that I regularly am treated better than locals. Outside of two or three negative incidents, I was dealt with politely and humanely during all of my 42 police stops. The cops in Ethiopia and Turkey brought me bottles of cold water. Some Jordanian police invited me by their barracks for a tea or a canteen lunch. I may be mistaken, but I don’t imagine this happening too often with the LAPD. (We’ll see.) And yet I realize that none of this is monolithic. There are PDs in the US that, where appropriate, must still practice community policing—the Andy Griffith approach, neighborhood social worker, the walked beat. They can’t all be driving decommissioned Bradley Fighting Vehicles down Main Street. Right?

Turkey seems to have had the most aggressive or suspicious police of the countries you've visited so far. What risk to public safety do you think you represented to them?

I was stopped 17 times in Turkey. And in almost all cases the Turkish gendarmerie was totally upstanding. Tell that to anti-government protesters, or to many ethnic minority Kurds, and they might laugh bitterly. But I am reporting my personal experience. The police were professional and courteous. Most officers had no idea who I was or what I was doing, so this treatment was in no way softened or prearranged through string-pulling. By the way, Oliver Stone apologized to the Turkish people for his ignorant and racist portrayal of their society in his 1978 prison movie “Midnight Express.”

The problem in Turkey is that I was walking through the scene of a terrible and recently paused insurgency by the Kurdistan Workers' Party, PKK, a civil war that has killed more than 35,000 people. I was staying off the main roads. I was nudging along a loaded cargo mule. And so here I did fit a profile: a PKK guerrilla.

The tensions caused by the war in neighboring Syria added to the suspicion. Kurdish villagers stopped me at gunpoint, thinking I was an ISIS infiltrator.

You’ve been stopped 42 times so far. Is that in line with what you expected? Which stop was the most worrisome? Were any particularly unexpected or surprising?

I had no idea what to expect. Forty-two police stops in more than 4,000 miles aren’t so bad. Once every 100 miles. If I’d tried this walk 500 years ago, I’d probably have been killed and dumped beside the trail many miles ago. I remind my readers of that: As bad as things seem, relatively speaking, we still live in a golden age of freedom of movement. 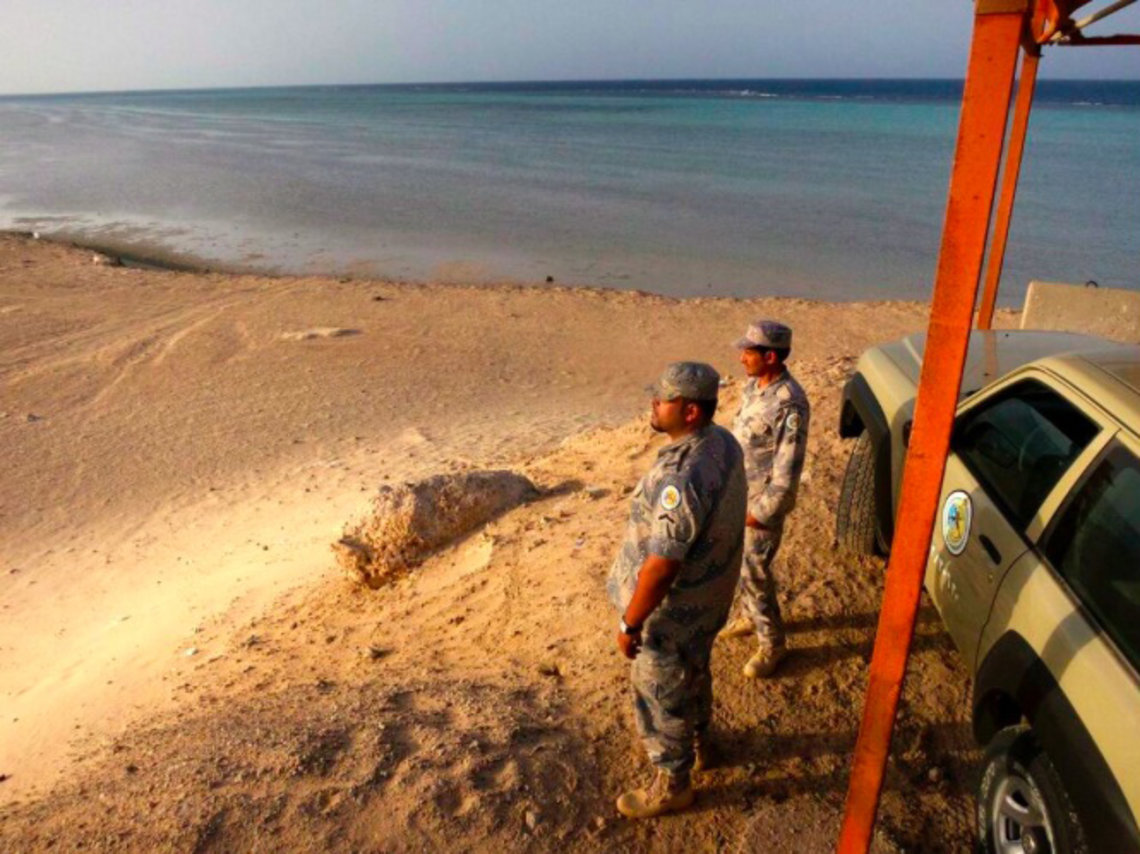 A stop by the Saudi Coast Guard.

If police in the United States stop someone without probable cause, there’s no obligation for a person to produce ID or provide so much as a name. On your walk, a guide, Bassam Almohor, refused to provide documents to an agent with the Palestinian secret police. Why did he refuse? Have there been circumstances where you have also refused to provide papers or answer questions during an investigative stop?

That was interesting. Bassam is a man of principle and he knew the officer was inexperienced, bored, on a fishing expedition, trying to throw his weight around. Like many Palestinians, Bassam is also bone weary of the daily humiliations imposed by the Israeli occupation of the West Bank, so his default position is that he’s not going to suffer unnecessarily under his own police force. Bassam knew the boundaries. He knew what he was doing. I usually don’t. If a police officer stops me and demands my papers, my default mode is to comply immediately, unless there is a very strong suggestion that something untoward is happening. I am always aware that I am a guest. I comply with the laws of my hosts.

You have made police stops one element of your journey that you’re tabulating and mapping. Why? What is it that you hope people can glean from your interactions with police?

It occurred to me that it would be an interesting way to document freedom of movement. Not statistically significant, of course. But interesting. The way police treat you says something fundamental about the society in which they serve.

When you were stopped in Djibouti by two officers with the National Police, your camels were impounded. Was there an impound lot? What do they do with confiscated assets? What is their policy on asset forfeiture?

Ha. Yes. It actually happened twice in two countries — in Ethiopia and Djibouti. In Ethiopia, the police walked the camels to their local station, which was surrounded by a high wall, and locked them up. We got them out the next day. There was no fine. It was a preventive impoundment: They didn’t believe the camels were ours. Hot camels, as it were.

In Djibouti things were more serious. We crossed into the country, by mistake, without going through passport control first. The immigration booth was a shack that was surrounded by thousands of miles of mountainous desert, and we literally missed it. Again, no fine was levied. They just issued a stern warning and gave us our camels back — then they made us walk them and leave them seven miles back inside Ethiopia. Quarantine laws, you know.

This interview has been edited for length.