But they hardly ever get punished this severely.

On April 14 Judge Jerry Baxter sentenced eight of the educators convicted in the Atlanta cheating scandal to prison terms of between one and seven years. Three former district-level administrators were each sentenced to seven years in prison, 13 years on probation, and ordered to pay a $25,000 fine. Five former teachers, principals, and testing coordinators will serve between one and five years in prison, with the lightest sentence going to former principal Dana Evans, who once acted as a guidance counselor to Judge Baxter's son (Baxter called her a "wonderful" educator). Two additional defendants took post-conviction plea deals; one will serve six months of weekends in jail and the other will serve a year of home confinement. Appeals are expected.

The threat of a prison sentence for a schoolteacher is usually connected to cases of sexual malfeasance.

Not so in Atlanta, where 11 public school educators will stand for sentencing on Monday. They face up to 20 years in prison after being convicted April 1 of participating in a district-wide conspiracy to falsify student test scores. Judge Jerry Baxter of Fulton County Superior Court took the unusual step in a white-collar case of ordering the defendants directly to jail after their guilty verdicts were read. 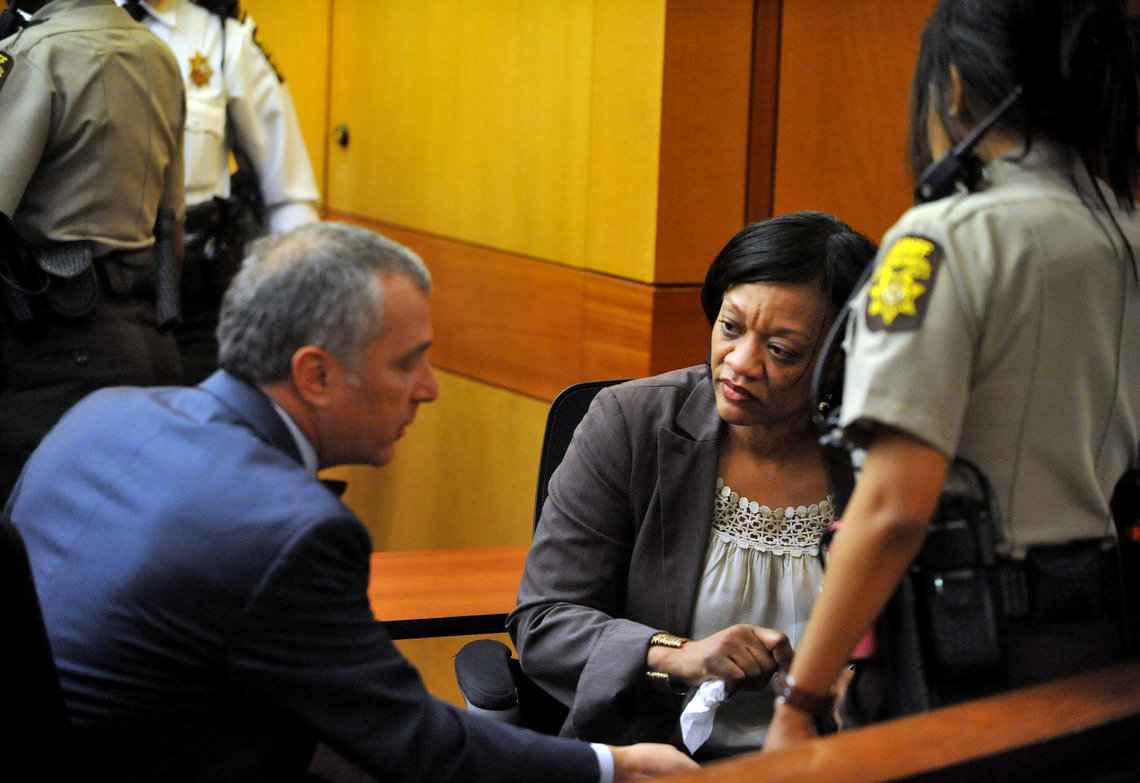 Though the Atlanta case is the largest standardized test cheating scandal to ever come to light, adult tampering with student testing is depressingly widespread. A 2013 U.S. Government Accountability Office investigation found evidence of cheating in 40 states. A 2003 study by economists Brian Jacob and Steven Levitt reported probable teacher cheating in 4 to 5 percent of Chicago classrooms; the researchers found cheating on tests became more prevalent after the district threatened to shut down failing schools and hold low-performing students back a grade. Nationwide, such sanctions are now business-as-usual. There is reason to believe cheating has become more common in the era of No Child Left Behind and Race to the Top, federal programs that push states to punish both schools and individual teachers for low or stagnant student test scores.

Most crooked educators never get caught. But what of those who do? How have they been penalized? Very rarely with significant jail or prison time, it turns out. In Columbus, Ohio administrators falsified state paperwork by “unenrolling” struggling students. This meant those students’ low test scores would not count against their schools within the state’s accountability system.

The alleged mastermind of the scheme, former district data chief Stephen Tankovich, pled guilty to tampering with records, a felony, and in December received a 15-day jail term and two years probation. His boss, former superintendent Gene Harris, pled guilty to dereliction of duty, a misdemeanor, and was sentenced in January to 100 hours of community service and a $750 fine. Harris also lost her administrator’s license. Six-hundred rank-and-file educators in Columbus have been ordered to return modest financial bonuses paid to teachers and administrators in schools whose rising test scores were a sham.

In El Paso, former superintendent Lorenzo García led an effort to prevent failing students from sitting for 10th-grade standardized tests, which were used to determine the district’s compliance with No Child Left Behind. Students were held back a grade, denied enrollment in 10th grade, or encouraged to stay home on testing days. In 2012, García pled guilty to conspiracy to commit mail fraud, and was sentenced to three-and-a-half years in prison and over $200,000 in fines and restitution. After García completed a drug counseling program, the federal Bureau of Prisons shortened his sentence by 11 months, and he was released in October.

A more typical outcome for a misbehaving teacher is to lose his or her tenure protections or professional license. Cheating has occurred at charter schools, too. Last year, Indiana shut down the Flanner House charter elementary school after evidence emerged of coordinated adult tampering with tests.

The relative harshness of the potential Atlanta sentences stems from District Attorney Paul Howard’s decision to charge the educators not only with falsifying documents, but with racketeering, which carries a possible prison term of five to 20 years. The case was high profile from the start, the result of blockbuster investigative reporting by the Atlanta Journal-Constitution and then a state investigation called for by former Georgia Gov. Sonny Perdue. (Politicians typically boast about high test scores. They rarely question their validity.)

As part of that investigation, testing expert Gregory Cizek of the University of North Carolina was retained by the state, and later testified for the prosecution. Typically, a student will erase and change at most one answer per test, Cizek said in an interview. But some Atlanta schools had an average of 13 to 15 erasures per student answer sheet, with 90 percent of those erased answers changed from wrong to right.

That statistical evidence, which was presented at trial, did not indicate who had done the erasing and correcting at each school, nor who knew about it or had ordered it. Georgia’s Racketeer Influenced and Corrupt Organizations Act (RICO) dates to 1980, and is based on the similar federal law. In applying RICO, “Prosecutors’ offices are going to look at unique situations that involve a pyramid structure,” said Jeffrey Grell, an attorney and RICO expert based in Minnesota. “You have leaders and foot soldiers. The leaders don’t get their hands dirty, but are orchestrating the crime and using other people to perpetrate the crime.”

RICO is typically used to prosecute drug lords and mafiosos. But Georgia’s law has been applied in unusual ways, such as in the prosecution of Final Exit, an assisted suicide network that sends volunteers to terminally ill people’s homes. In a RICO case, the prosecution can present hearsay evidence that the defendant was aware of or tacitly encouraged the wrongdoing; the defendant does not have to have committed the wrongdoing directly. Typically, the goal of RICO is to hold higher-ups in a criminal enterprise accountable.

In Atlanta, the district’s former superintendent, Beverly Hall, was alleged to have encouraged and covered up the cheating. She was infamous — or celebrated, depending on one’s viewpoint — for establishing a “no excuses” culture when it came to test scores. According to the March 2013 grand jury indictment, she fired whistleblowers who reported cheating or questioned her emphasis on testing. Hall’s human resources chief, Millicent Few, testified at trial that Hall ordered her to destroy internal reports that contained evidence of cheating in the city’s schools.

Hall, however, was unable to stand trial because she was suffering from breast cancer, and died on March 2. In the end, the RICO prosecution targeted mostly ordinary teachers and principals, not top-level staffers. Of the 35 educators indicted in the case, just five were district-level administrators: Hall, Few, and three regional directors responsible for overhauling the city’s elementary and middle schools.

Few and 20 others took plea deals that included one to five years of probation, testimony against former colleagues, community service, modest fines, and refunding bonus dollars paid for high test scores. Given the disparity between those deals and the five- to 20-year prison terms the convicted educators now face, going to trial was a risky, and some might say foolhardy, move — a point that Judge Baxter impressed upon the defendants, warning them last year of “severe consequences” for those convicted.

Defense attorney Robert Rubin, who represented former Dobbs Elementary School principal Dana Evans, said, “The plea deal was extremely sweet. You don’t get those kind of deals in any case, let alone this one. I made sure my client knew the offer and was aware of the risks involved, and she really never hesitated. This was going to be a denial of guilt every which way. There was no hard decision to make.”

RICO allowed prosecutors to try all 12 defendants at once. “Dana Evans was the principal of one school, she knew nothing about other schools,” Rubin said. “In the single RICO trial, all the things that happened at all the schools and even in the central office with Dr. Hall were attributable to Dana Evans as part of the conspiracy. You are responsible for the acts and conduct and statements of people you have never met.”

Sanford Wallack represented retired special education teacher Dessa Curb, the only defendant who was acquitted of all charges. Naomi Williams, a former teaching assistant who had been fired, accused Curb of cheating, but only after the district-wide scandal came to light, Wallack said. According to evidence introduced at trial, Curb’s students had failed their standardized tests, and erasure rates in her classroom were below district averages.

Curb “had unwavering faith in her innocence,” Wallack said. “But from a legal context, what’s important here is the over-criminalization. The licensing board in Georgia had already suspended teachers or revoked their license” — thus ending their careers in education. “There was no need to bring this as a criminal case. The DA’s office has, I’m sure, spent millions of dollars. All of that money doesn’t help a single student.”

Several commentators have echoed Wallack’s critique, wondering why middle-class black teachers in Atlanta have been charged with racketeering, but not affluent white financial professionals implicated in the subprime mortgage crisis. Richard Rothstein of the Economic Policy Institute wrote that the Atlanta educators “took the fall” for a flawed set of national education policies tying adult job security and pay to student test scores.

Cizek, the testing expert, sees the convictions as a welcome reminder that districts need to get serious about improving test security. In many states and cities, teachers now grade standardized tests taken by students in other schools, but not their own students’ tests. Students are beginning to take exams on computers, which eliminates the need for answer sheets like the ones tampered with in Atlanta. In especially sophisticated computer testing systems with large banks of potential test questions, each student in a classroom may be given a slightly different exam, which means there is no universal answer key.

The Atlanta cheating prosecution was “probably the most vigorous we’ll ever see,” Cizek said. “It really provided a stimulus for other folks to straighten up.”