The softer side of Justice Department intervention.

Six months before Baltimore exploded in anger at the city’s police, Justice Department officials were already busy examining the record of brutality and misconduct that had plagued the force for years.

This story is published in partnership with Time.

But unlike other cities that have come under investigation by the department’s Civil Rights Division after complaints of excessive force, Baltimore found its way into a less-onerous and adversarial Justice program that emphasizes cooperative support for local law-enforcement agencies. In fact, Baltimore requested the intervention.

That Justice program, called the Collaborative Reform Initiative for Technical Assistance, was created in 2011 by the department’s Office of Community Oriented Police Services, or COPS. Compared to the avenging lawyers of the Civil Rights Division, this program’s consultants might be called the good cops.

Where the Civil Rights Division is known for filing lawsuits in the federal courts to compel recalcitrant police agencies to stop discriminatory practices or the excessive use of force, the COPS plan offers expertise and training to help change-minded police departments implement new policies on their own.

“There are 18,000 police departments in this country, and the idea that we can sue our way into reform, or put every police department under a consent decree, is just not viable,” the director of the COPS office, Ronald L. Davis, said in a telephone interview with The Marshall Project.

(On Friday, Baltimore’s chief prosecutor, Marilyn J. Mosby, announced she had filed criminal charges against six police officers in the death of Freddie Gray, a 25-year-old African-American man who was arrested on April 12 for allegedly carrying a switchblade knife and died a week later from injuries he suffered while in custody.)

The Baltimore police commissioner, Anthony W. Batts, had known Davis for years when he telephoned him last fall to ask for the COPS program’s help. The call came just days after the Baltimore Sun reported on Sept. 28 that showed the city had paid out $5.7 million in court judgments and settlements to resolve more than 100 police misconduct lawsuits since 2011. 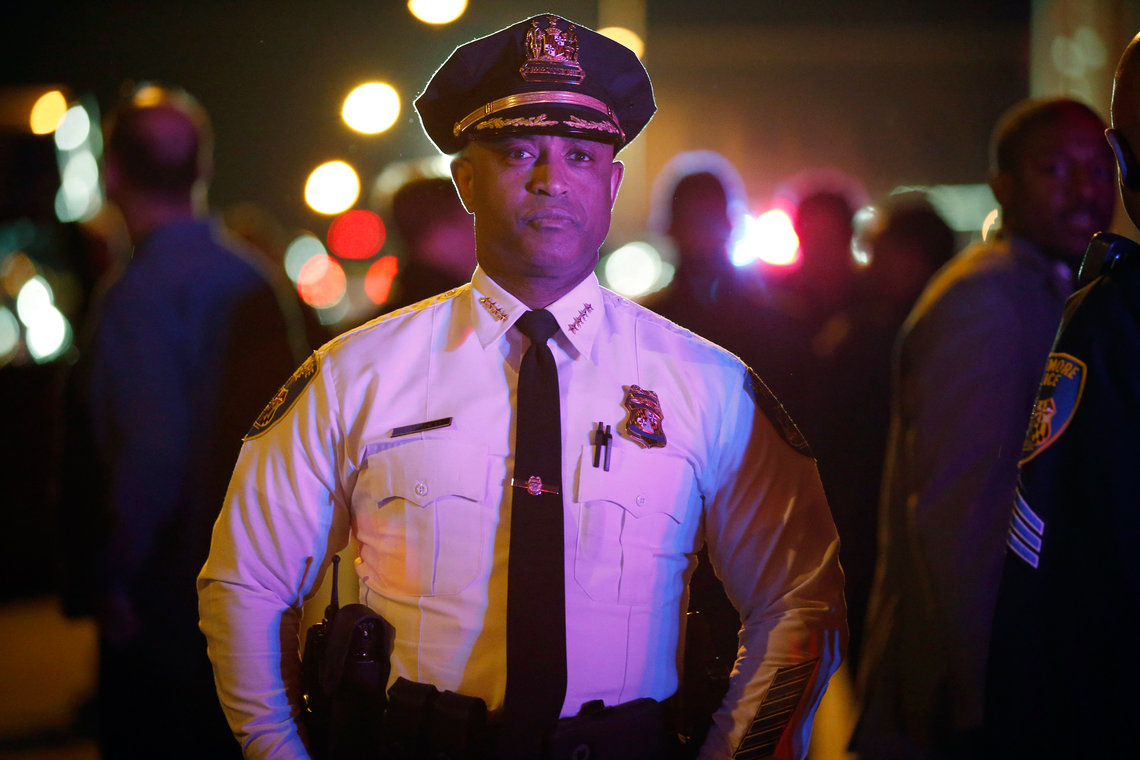 Baltimore Police Department Commissioner Anthony Batts surveys the corner of North and Pennsylvania avenues on April 30. Months before the death of Freddie Gray in police custody, Batts had asked for assistance in reforming his department from the Justice Department’s Office of Community Oriented Police Services.

Before taking over the Baltimore department in 2012, Batts had been the police chief in Oakland, Calif. At the time, Davis – a 19-year veteran of the Oakland force – was leading the police department in East Palo Alto, a small city 31 miles across the San Francisco Bay.

Davis said he had only a professional relationship with Batts, but knew his work in Baltimore, Oakland and Long Beach, Calif. Davis also emphasized that while the Collaborative Reform program necessarily gives priority to police agencies that are eager to change, it does not offer them an end-run around the Civil Rights Division.

In Baltimore’s case, Davis said, he consulted with officials of the division’s Special Litigation section to make sure they had not begun a preliminary investigation into a “pattern or practice” of discriminatory policing there. He added that the Civil Rights Division can also step in later, if a police force fails to make good on its promises to make changes in the collaborative program.

“The COPS office is not an investigatory body,” he said. “If we don’t see the same earnest effort that you committed to, we will cease and desist our program and turn everything we have over to Civil Rights.”

Batts and the Baltimore mayor, Stephanie Rawlings-Blake, announced within days of the Sun article that they, too, had sought the Justice Department’s intervention, and they issued a 41-page reform plan that they described as a set of parameters for change. The steps in that plan included increasing accountability for rogue officers, tracking misconduct more closely, and possibly providing body cameras to record officers’ actions.

But some local officials remained unconvinced. The City Council president, Bernard C. (Jack) Young, had written to Eric Holder on Oct. 1 requesting “a full review of the Baltimore City Police Department’s policies, procedures and practices.” Lester Davis, a spokesman for Young, said the councilman had specifically sought the involvement of the Civil Rights Division and would submit a new request to Holder’s successor, Loretta Lynch.

Officials of the Civil Rights Division said in recent interviews with The Marshall Project that while they have stepped up their enforcement efforts in recent years, they continue to struggle with the limitations of a Special Litigation staff of only about 50 attorneys, some of whom work on issues other than police accountability.

“Would the Civil Rights Division and the country benefit from having more people to focus in on these issues? Absolutely,” the acting assistant attorney general who heads the division, Vanita Gupta, said in an interview. “I would be an idiot to say that I don’t want more people.”

The Collaborative Reform Initiative represents what is effectively a second track on which the Justice Department can push for change with local law-enforcement agencies. But — particularly in cases like that of Baltimore, in which a force might be looking for some relief from public criticism — it requires careful vetting, current and former department officials said.

“The COPS program doesn’t have any enforcement authority,” noted William Yeomans, a former Civil Rights Division official. “So the department has to conclude that here is a police department that can take voluntary measures to improve itself. You have to have confidence in the leadership of the police department.”

Another former Justice Department official, Robert Driscoll, who served in the George W. Bush administration, said he was suspicious of how the Obama administration had decided on the less-invasive option for Baltimore, a city governed by Democrats.

“That is a nice way out of a difficult problem, when people say, `What are you going to do in response to the Baltimore Sun article?’” he said. “The difficulty of the way this is being handled is figuring out who gets the COPS approach and who gets a full-blown (Civil Rights Division) investigation.”

Baltimore is one of eight cities that have been or are being “assessed” – not investigated – by the Collaborative Reform Initiative. In Las Vegas and Philadelphia, teams of federally funded consultants have recommended dozens of reforms in such areas as use of force guidelines, internal investigations, firearms training and the recording of witnesses to shootings by the police.

“It is really an alternative,” a Justice spokesman, Kevin Lewis, said. “Before it gets to a place that it is so escalated that you need a pattern and practice (lawsuit), what the Department of Justice is doing is providing an option.”

But the department’s softer side is not always welcomed, either.

After a series of police shootings in Las Vegas, the ACLU of Nevada requested an investigation by the Civil Rights Division. When the Justice Department decided it would use the COPS program instead, ACLU lawyers wrote to the Justice Department expressing dismay. “We were very apprehensive,” said Tod Story, ACLU of Nevada’s executive director. “We thought what was happening here was worthy of a full-scale civil rights investigation.”

Ronald Davis, the COPS director, said he had no illusions about the extent of the challenges that police reformers faced in Baltimore.

“The powder keg that exploded in Baltimore has been simmering for generations,” he said. “And the idea that us starting an assessment in October somehow would have stopped that – I think I would disagree with.”