Nigerians are Flocking to Work in Texas Prisons

An immigration trend changes the face of corrections.

John Okperuvwe flew from Lagos, Nigeria, to Boston in September 2008 after winning a visa through a lottery run by the U.S. State Department. He spent three days in Boston with a friend, and then moved to Los Angeles, where he knew a pastor from back home. He worked as a security guard at the Staples Center and the city’s main train depot, and took a second job transporting blood between doctors and laboratories. His wife and children — they now have two boys and two girls — eventually joined him, and they squeezed into a single room in the pastor’s house. In terms of job opportunities, Okperuvwe says, “California was as dry as Africa.”

In early 2010, Okperuvwe found a friend from his college days in Lagos on Facebook. He sent a message, and they started chatting. The friend was working in a Texas prison and making good money.

Okperuvwe prayed. He felt he had little to lose, and that March, he found a cheap apartment in Houston and took the entrance exam for the Texas Department of Criminal Justice (known locally as TDCJ). He passed easily. In September, TDCJ offered him a job in Huntsville, a town of 30,000, about an hour from Houston, which houses many of the state’s prisons and the agency’s headquarters.

As soon as he arrived, Okperuvwe discovered that there were lots of Nigerians and other West Africans already living in Huntsville, all working for TDCJ. Some, like him, had brought their families and others were single men living in department dorms. Many, like him, already had college degrees from back home that wouldn’t transfer so they were studying at Sam Houston State University, the local college, during the day and working at night.

Okperuvwe had discovered a phenomenon that had already become apparent to prisoners, their family members, and correctional officers: since around 2008, a wave of African immigrants have taken jobs as prison guards in Texas. The exact numbers are unknown — the Texas prison agency does not keep track of the birthplaces of its employees — but prisoners and correctional officers anecdotally ballpark it in the hundreds. Many come from Nigeria, but others hail from Cameroon, Liberia, Uganda, and Sierra Leone. In 2009, the newsletter Prison Legal News reported that at the Ramsey Unit, near Houston, entire shifts were “largely composed of Nigerians.” 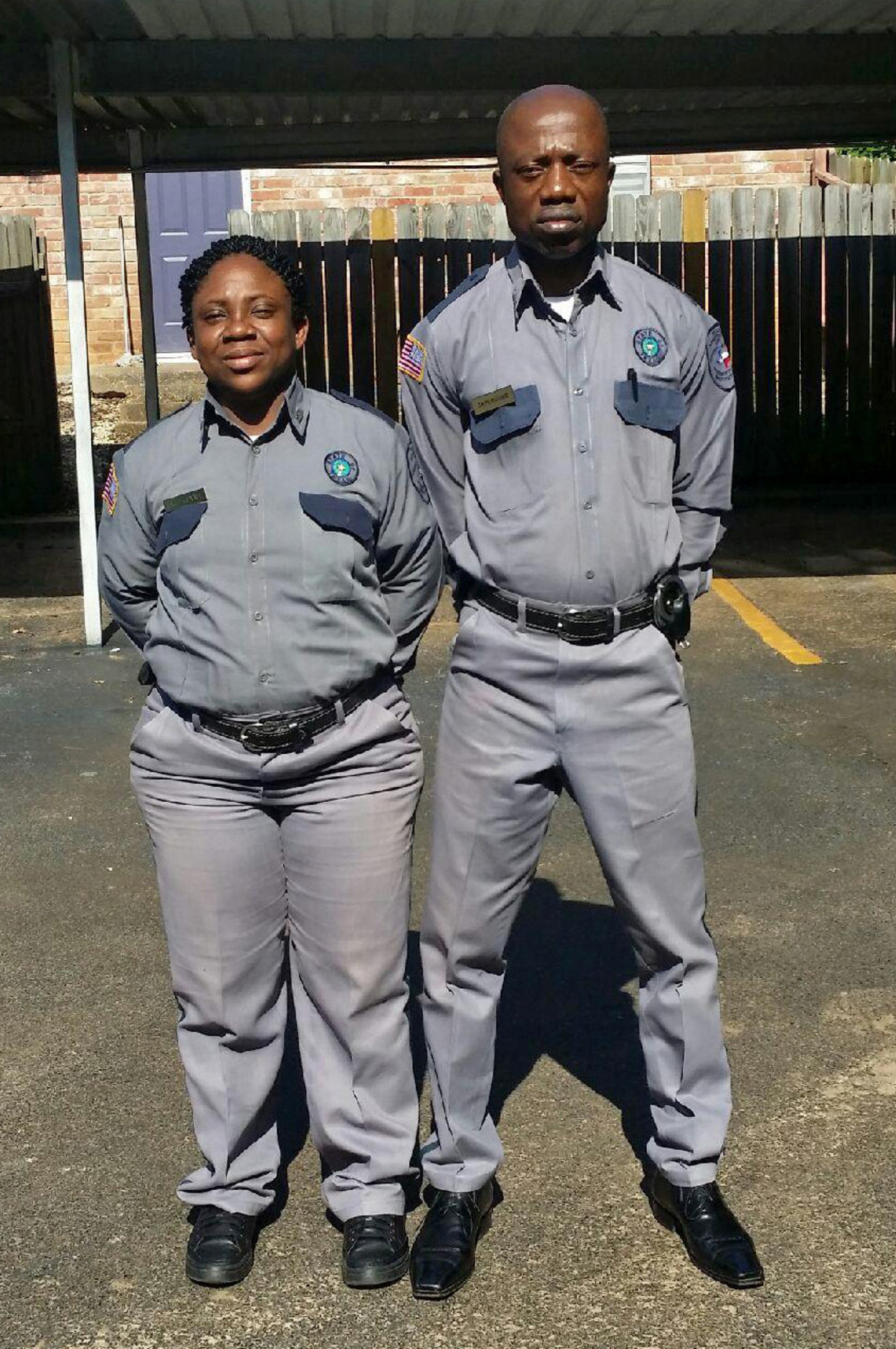 John Okperuvwe with his wife, Ufuoma. Both are corrections officers at prisons in Huntsville, Texas.

The rise of African correctional officers is a story of an immigrant community finding an economic niche, but it is also a story of how prisons have shifted from the kinds of places where one makes a career to transient way stations to the middle class. “A lot of these [African] guys I see coming in are going to college and also working,” says Lance Lowry, head of the Huntsville local of the American Federation of State, County and Municipal Employees, which represents correctional staff. “We see a lot of them leave the agency to make more money elsewhere. There’s a lot of turnover.”

Over the last decade, Texas prisons have struggled to find employees and keep them. As prisons expanded and incarceration numbers ballooned in the 1990s, many facilities were built in small towns with high unemployment, but then the rest of the economy improved and the state simply could not compete with private industry. A recent boom in natural gas drilling along the Eagle Ford Shale, which stretches across East and South Texas, has brought truck driving and rig jobs to the towns where most of the state’s prisons are located.

Harder to document but no less real is what National Public Radio recently termed a “cultural stigma” around guarding prisons. Correctional officers have always suffered from a lack of the esteem Americans bestow on soldiers, police officers, firefighters, and other public servants who risk violent injury and death in their work. The 2015 edition of the textbook American Corrections baldly refers to being a “custodial officer” as a “dead-end job.”

This perception has combined with low pay and poor conditions to produce staffing shortages. Over the last few years, understaffing has been reported in numerous state prison systems, including California, Florida, Georgia, Kansas, Michigan, Minnesota, Montana, New Hampshire,New York, Ohio, Oklahoma, Nevada, and Virginia. Texas has more than 3,000 vacant guard positions and has tried to fill them through pay raises, recruiting bonuses up to $4000, and subsidized housing.

Other states with large prison systems and immigrant populations, including California, Florida, and New Mexico, require employees to have citizenship or be in the process of applying. In Texas, job applicants to the prison system only need to be authorized to work in the U.S. This policy, along with a major metropolitan center of immigration (Houston), a related entry-level industry (security), and a climate not so different from West Africa, have all contributed to the rise of African workers at Texas prisons. An online discussion forum called Nairaland, which has been rated the seventh most-visited website in Nigeria, features a post about TDCJ jobs, which reads, “The State Of Texas is the best Place for you to pick up in life again.”

T he African immigrants working in Texas prisons have a reputation of being strict and serious. Steven Epperson, who served several years at the Darrington Unit, near Houston, describes the African officers he encountered to be “short-tempered and irritated by stupidity and ignorance.” Okperuvwe shows flashes of this stereotype — he chuckles while recalling how one prisoner complained to him, “Man, they brought you here to oppress us!”

But as their numbers have grown, cultural tensions have become more noticeable. Some of the Nigerian men initially have trouble taking orders from female superiors. Veronica Williams, an African-American TDCJ employee who attends Okperuvwe’s church, says she has seen these immigrants face discrimination and accusations that they’re stealing jobs that should go to Americans — particularly in response to a program in which TDCJ hires immigrants on work visas (as opposed to ones who are already in the U.S.). There are less than 50 Africans1 in this category. In 2009, a Nigerian officer in Huntsville named Marshall Akpanokop was accused of raping and impregnating a female prisoner. He was later proven innocent when a DNA test revealed that he was not the father, but Akpanokop sued the agency, arguing he had been “singled out as the culprit” because “he was a dark-skinned, Nigerian national with an accent.”

As of April 2015, TDCJ reported the following numbers of foreign employees with work visas:

Such dramatic incidents are rare, but language problems have been a consistent cause for grumbling. Family members of prisoners tell anecdotes about brothers and sons who don’t understand the orders given by an African officer, due to his or her accent, and find themselves written up for failing to follow those orders. “The inmates don’t know how to comply,” says Jennifer Erschabek, who directs the Texas Inmate Families Association and whose son is at the Luther Unit, northwest of Houston. “The Africans think they’re resisting, and then they write them up a case....And then other guards have a security issue; when there’s a problem, they can’t rely on some of the African guards to communicate in a bad situation.” Anonymous officers have expressed similar frustrations on an employee blog.

Lance Lowry, the union head, brushes off these concerns. “There are immigrant COs who don’t handle the population well, but I’ve also seen guys from Texas that can’t do it,” he says. “It’s all about the traits you come in with.”

Lowry mostly worries that these immigrant workers are particularly vulnerable to exploitation from the agency. Last year, as national anxiety about the spread of Ebola reached a peak, Glenn Beck started to wonder whether African prison guards in Texas might be bringing the disease over. TDCJ started requiring employees returning from a trip to West Africa to take off 21 days — the incubation period for Ebola — with their personal leave time or forgo pay.

O ne Sunday morning earlier this year, Okperuvwe stood in front of room of several dozen men and women, half in suits, dresses, and big hats, and half in bright African prints and head wraps. He had worked an overnight shift, supervising prisoners as they cooked an early breakfast, but he looked chipper in a black suit, shouting “praise the lord” while his teenage son pounded a drum set and an older man played a snaky line on an electric keyboard. The crowd clapped and danced. Six singers clutched microphones and belted out American Christian rock songs, standing against flashing stage lights and a wall painted to portray an ocean scene. 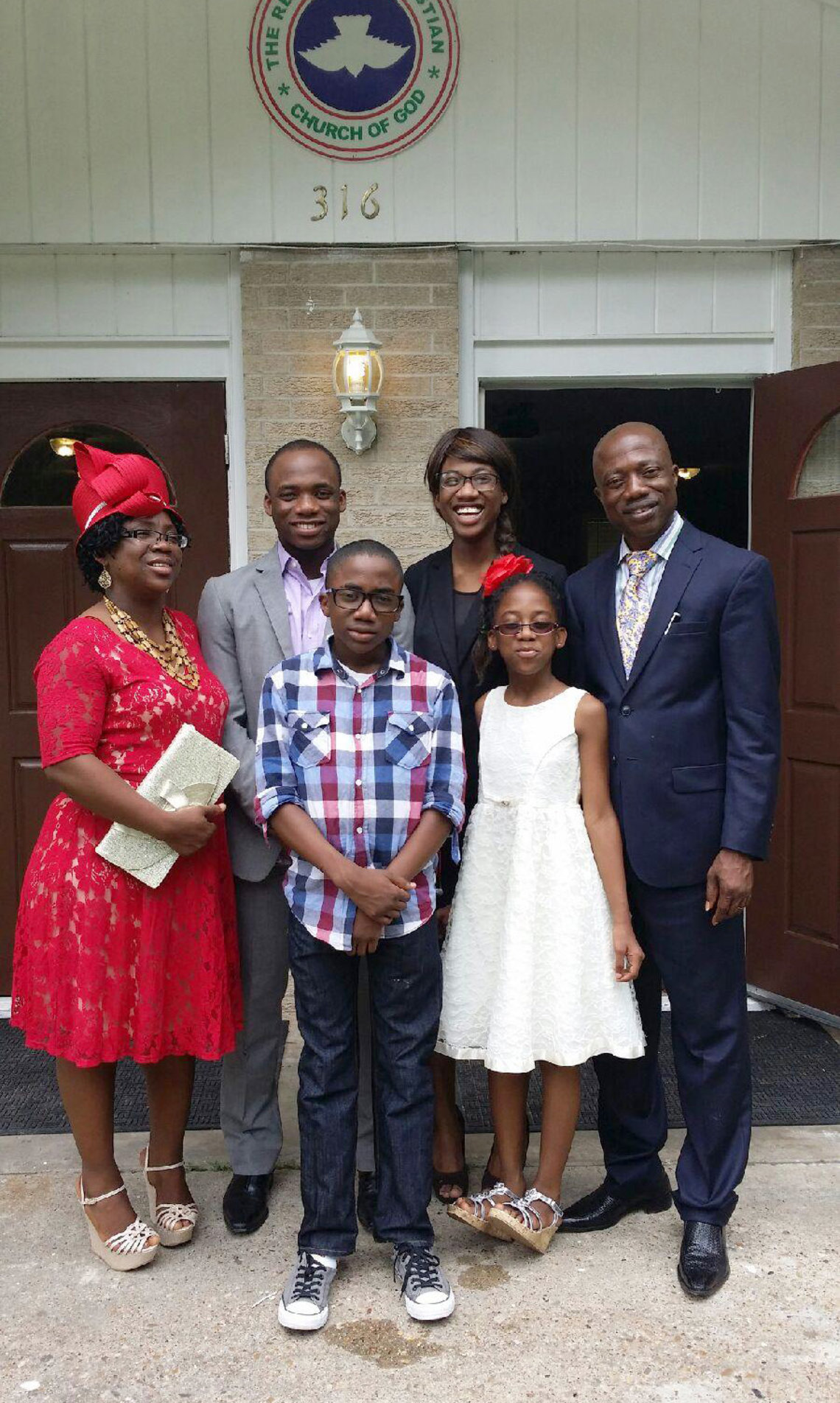 Okperuvwe, right, with his wife and children at church.

Okperuvwe became a pastor in Nigeria, and shortly after he arrived in Huntsville in 2010, he started this church, the Rhema International Assembly, out of his family’s apartment. It is a branch of the Redeemed Christian Church of God, a revivalist movement founded in Nigeria in the early 1950s. Now housed in a small, undistinguished building within walking distance of the town square, the church has become the “meeting point for all the Africans” who live in Huntsville, virtually all of whom work for the local prisons.

Okperuvwe himself works at the Wynne Unit, a massive facility that houses up to 2,300 prisoners, where he supervises the kitchen and makes sure the inmates don’t steal silverware to use as weapons. He does not love his job, but considers it far preferable to what he did before. Growing up in a small city called Warri, in the delta region of southern Nigeria, and then in Lagos, the country’s biggest city, he farmed and collected money for microbus drivers. In his 20s, he tutored children in chemistry and managed a transport company.

Compared to the alternatives, he says, guarding a prison is a “blessing.” Private security jobs like the ones he held before in Los Angeles and Houston start at under $18,000 a year. TDCJ jobs start around $29,000, and feature regular raises, health insurance, paid vacation, and sick days. He can also work night shifts, allowing him to take classes in public health at the local college (he has a microbiology degree from Nigeria, but it is not recognized here).

After delivering his sermon, which was called “The Strategy of Crossing Your Jordan,” Okperuvwe took a seat behind his desk in a tiny office in the back of the church. A line of people stood outside the door waiting to speak with him. He has become a kind of therapist, helping church members with the problems of cultural dislocation, including divorce and the lack of a safety net when they are sick or injured. The church owns a van, which Okperuvwe uses to pick up new immigrant families as they arrive in Huntsville to “help them settle down.” He has seen them come from New York, New Jersey, Maryland, Michigan, and Minnesota.

It is impossible to know whether Okperuvwe’s efforts have caused the numbers of Nigerians and other Africans working in Huntsville to increase, but when old acquaintances reach out on Facebook or by phone, he talks up TDCJ jobs, just as his friend once did to get him here. His attitude toward the agency has an evangelical fervor; there is no trace of a “cultural stigma.”