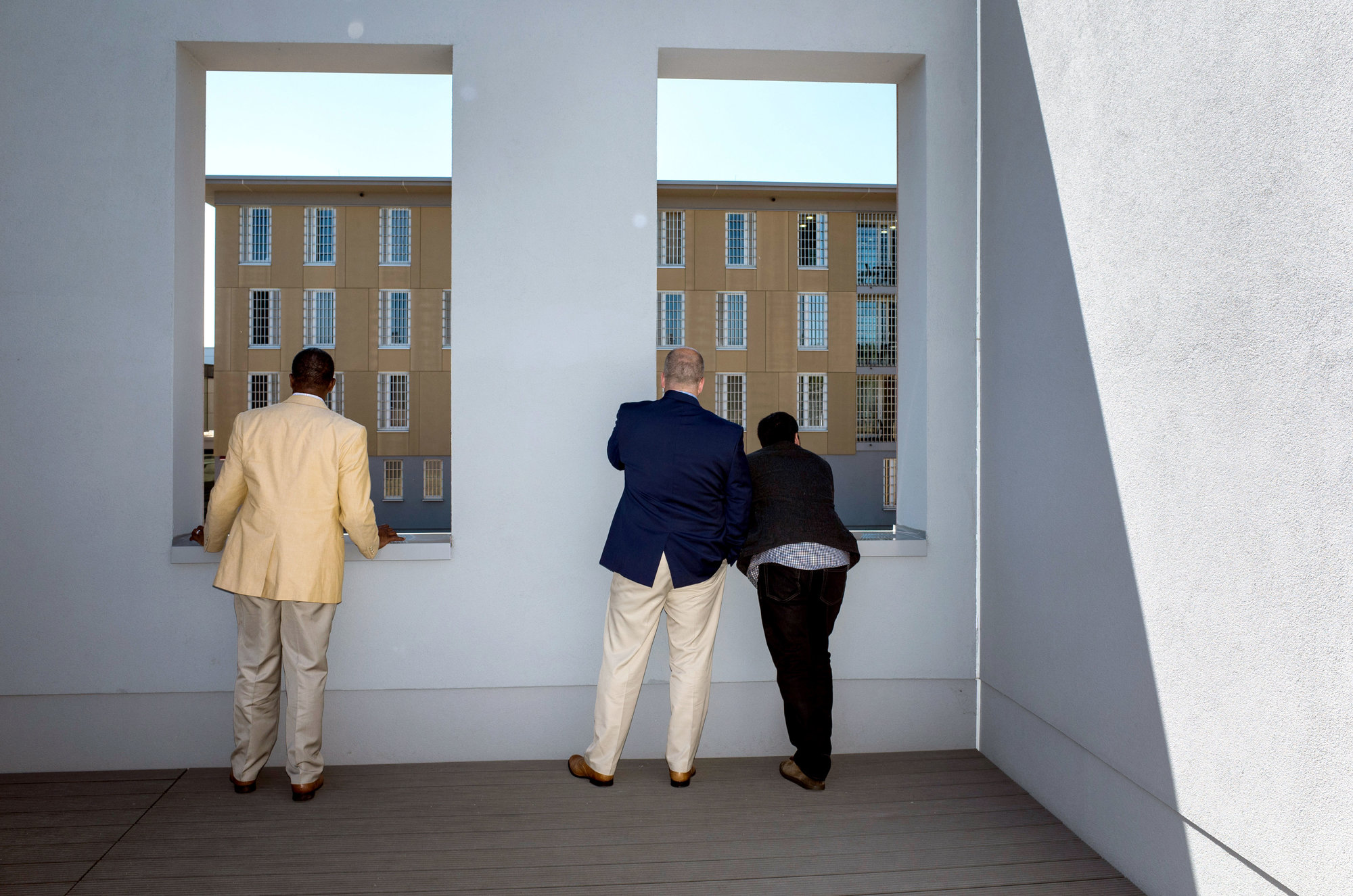 The Delegation of the International Sentencing and Corrections Exchange at Heidering Prison in Brandenburg, Germany. JULIAN RÖDER
By Maurice Chammah

On Sunday, bleary after an overnight flight from New York, a group of American criminal justice professionals squeezed into a private room in a downtown Berlin restaurant. They were preparing to visit German prisons and meet German prison officials. The trip, organized by the Vera Institute, a think tank based in New York, is all about studying another system so that we might better understand our own.

From the brief introductions, it was clear that this trip would be as much about the United States as about Europe. Germany’s system of sentencing (15 years is the longest most people go to prison here unless they are demonstrably dangerous) and incarceration (open, sunny prisons, full of fresh air, where prisoners wear their own clothes) serves as a reference point for reflecting on the punitive mentality that has come to define the U.S. justice system.

In Germany, then, we would see ourselves—but through a looking glass.

The American travelers—corrections officials, district attorneys, academics, and activists—represent the variety of perspectives that fall under what journalists have taken to calling the “emerging consensus” on criminal justice reform. There are the guys who run prisons and worry about recidivism numbers. There are elected district attorneys wondering how the public responds to such short sentences. And then there are reform activists determined to see prisoners treated humanely.

Their responses to German prisons offer a rich window into what these groups value and exactly what it might take to reduce incarceration and improve the American criminal justice system. On Sunday, Jeremy Travis, president of the John Jay College of Criminal Justice in New York, which helped organize the trip, said he hoped the experience would offer a “stress test” to help us all understand “what this moment of opportunity really looks like.” He expressed hope that the travelers will “take back ideas to fuel the…”

He paused. “Well, what are we fueling?”

On Monday, as we visited Heidering Prison—and struggled to pronounce its German name, “Justizvollzugsanstalt Heidering”—it took a while for the differences to come into focus.

Bernie Warner, the corrections secretary of Washington, noticed the faint smell of smoke—all the prisoners can smoke here, unlike their counterparts in the U.S. Inmates live in rooms and sleep in beds, not on concrete or steel slabs with thin padding. They have privacy—correctional officers knock before entering. Prisoners wear their own clothes, and can decorate their space as they wish. They cook their own meals, are paid more for their work, and have opportunities to visit family, learn skills, and gain education. (Inmates are required to save money to ensure that they are not penniless upon release.)

There are different expectations for their corrections officers—who are drawn primarily from the ranks of lawyers, social workers, and mental health professionals to be part of a "therapeutic culture" between staff and offenders—and they consequently receive more training and higher pay. There is little to no violence—including in communal kitchens where there are knives and other potentially dangerous implements. And the maximum time inmates spend in any kind of punitive solitary is eight hours.

"Find a [security] camera,” Gregg Marcantel, the corrections secretary of New Mexico, said as he walked through the prison’s main corridor. “There aren’t any!” When he heard that prisons in Berlin have 33 physicians to care for 4,200 inmates, Marcantel’s response was a hearty, “Good God!” That’s a ratio of about 1 doctor for 127 prisoners. In Virginia's state system, according to a recent count, there was one doctor for every 750 inmates.

We walked through pristine white cells that looked more like dorm rooms at a liberal arts college than the steel and concrete boxes most U.S. prisoners call home. The toilets and sinks were white and ceramic, nothing like the stainless steel bowls bolted to the wall in many U.S. prisons (Heidering Prison opened in 2013, but such toilets have been installed in older prisons as well). Most prisoners have knives and forks in their cells. Though the prisoners cannot access the Internet, they have telephones in their rooms, and they can call anyone — even the media.

“We have nothing to hide,” Detlef Wolf, vice governor for Heidering Prison, said with evident pride.

As the tour took turns walking through the cell, I briefly met a 24-year-old prisoner named Bryan Meyer. He was wearing his own clothes—cargo shorts, a long-sleeved t-shirt, and a black baseball cap. One of the most visually striking aspects of German prisons is how prisoners wear regular street clothes. It adds to the sense that the only thing being denied them is their liberty.

Administrators here freely work terms like “human rights” and “dignity” into speeches about their prison system, and Germans appear to view people who commit crimes as medical patients (the word “prognosis” came up a lot to describe the status of an inmate). There is little stigma after prisoners finish their sentences — employers in Germany generally do not ask job applicants if they have a criminal record, according to Michael Tonry, a University of Minnesota professor on the trip who’s studied corrections systems in the U.S. and Europe. In some cases, the cultural norms were so foreign that it was pretty much impossible to imagine them taking root in the U.S.

Once the shock wore off, the questions came, and they reflected the political and professional concerns of those doing the asking. Many of the leaders here who have been elected or appointed — including Marcantel of New Mexico and Jeff Rosen, the elected district attorney in Santa Clara, California — wanted to know about victims. Do their desires for retribution play any role in sentencing here? (In the U.S., they are often allowed to read “victim impact statements” before juries assess punishment, and prosecutors often consult with them). Do sensational murders lead to the passage of more punitive laws?

The Germans had trouble making sense of these questions. There were a lot of blank stares. In Germany, prosecutors and judges are not elected. As career civil servants, they are insulated from public opinion. Their work is more “technical,” said Gero Meinen, who directs the prison system in Berlin. The role is to protect the rational system of correction — which aims to restrict freedom the least amount necessary — from the retributive impulses that individual victims and society in general might feel.

Now it was the Americans’ turn for blank stares.

Besides the surprise, other emotions lingered just below the surface. A few travelers were skeptical, and will be looking for ways in which things might be worse than they appear throughout the rest of the week.

Shaka Senghor, who went into Michigan prisons for second-degree murder at age 19 and emerged after 19 years (seven of them in solitary confinement) to become a public speaker and activist, was as surprised and skeptical and curious as everyone else. But he was also angry. He’s the only member of this delegation who has been incarcerated in the U.S., and it was galling for him to see how different things could have been for him in Germany. He could have been paid ten to 20 euros a day instead of the 23 cents an hour he got paid working in a prison kitchen.