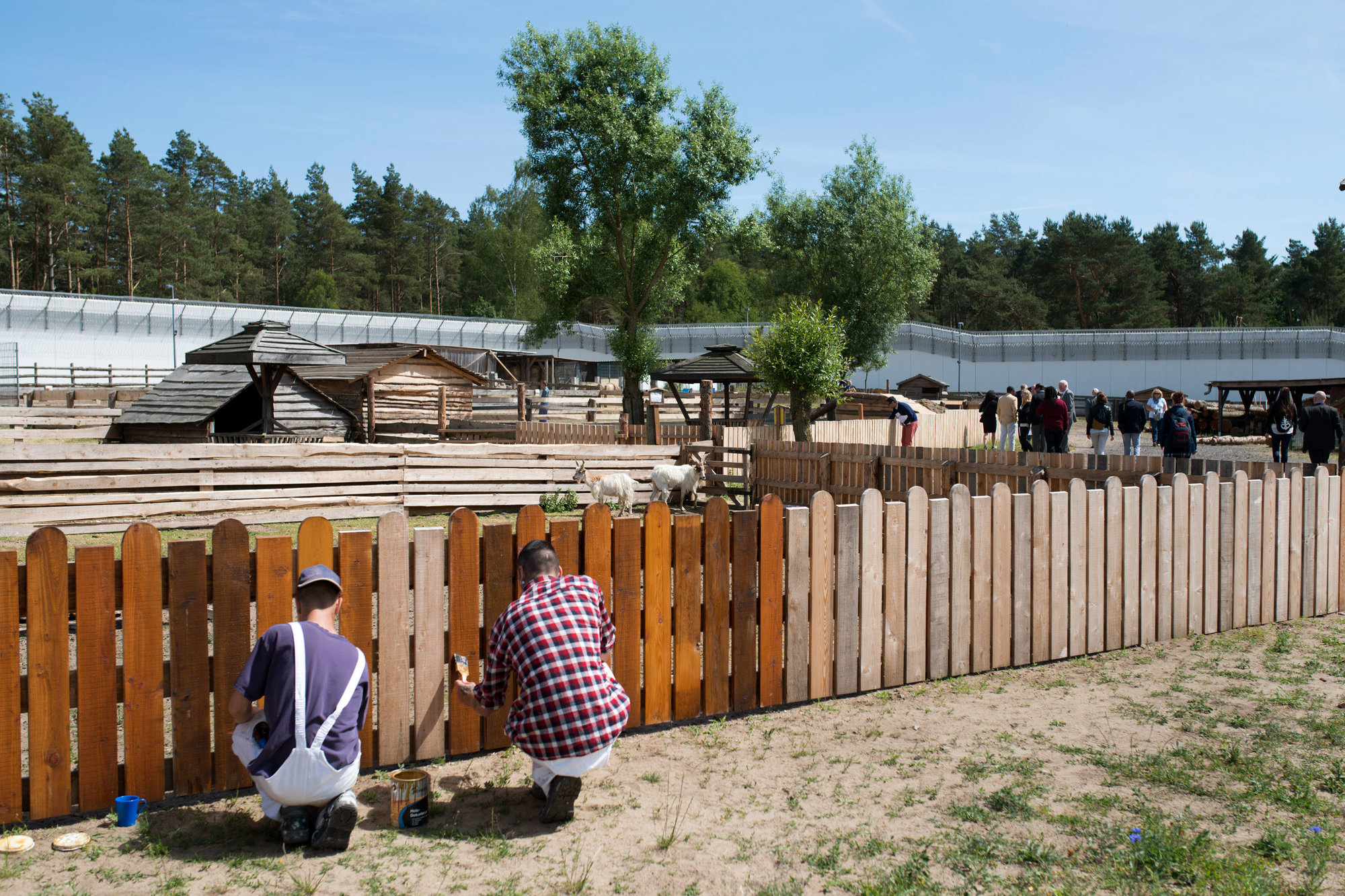 Neustrelitz Prison is a juvenile facility, but whereas in the United States the word “juvenile” usually refers to those under 18, the 150 men and women at this German institution are almost all between 19 and 25. They’re housed in a collection of small white buildings with pitched, shingled roofs that sit behind a wall in the countryside of Mecklenburg-Western Pomerania, a large but sparsely populated state along Germany’s northern coast about the size of New Hampshire. (It’s even got the same tall trees and crisp air.)

There are horses for the prisoners to ride, and dozens of rabbits, including one that — according to a prisoner who cares for him — has done well in some sort of national rabbit competition.

Wednesday’s tour of Neustrelitz represented another moment in which US corrections officials, prosecutors, activists, and researchers — in the country for a week — could witness the extent to which Germany’s prison system differs from their own. Here, administrators emphasize therapy (the rabbits are part of “animal therapy”) and eschew the retributive impulse that has defined American justice for decades.

But because Neustrelitz houses young men and women who have committed more serious crimes — more than half of them violent — there was a familiarity that made the contrast easier to digest. “This is the place for violence because they are young, they are aggressive, they have no control,” said Jörg Jesse, head of prisons in Mecklenburg-Western Pomerania.

We saw the familiar sights of incarceration: surveillance cameras, blue sweatsuit uniforms, steel-reinforced bars over windows, and tall, white walls topped by spools of razor wire. And in both Germany and the U.S., there is a widespread recognition that young brains are different: they are less mentally culpable for their crimes, more open to rehabilitation, and more vulnerable to exploitation in the culture of prisons. (That last point has reached the U.S. more slowly; while the 2003 Prison Rape Elimination Act demands that anyone under 18 be separated by “sight and sound” from older prisoners, it has not been fully implemented).

The difference is that in Germany, they take these ideas further. Throughout Europe, juvenile sentencing laws cover people until they are at least 18. In Germany, that age is 21, and there is currently a political debate underway about extending the juvenile law to cover men and women up to 24. (They already stay in juvenile prisons until they are 24 or 25.) This is in sharp contrast to the U.S., where 16 and 17-year-olds are regularly placed in adult facilities. “We do not transfer juveniles to adult courts,” said Frieder Dünkel, a criminologist at the University of Greifswald in northern Germany, with a brisk matter-of-factness. “It is not possible.”

Kai Schulz is 40 days away from the end of his four-year sentence for attempted murder. He's 23 and wears his hair shaved on the back and sides with a fashionable little ponytail on top, along with a thin goatee. He’s a brawny guy, a middle linebacker when he plays football — the American version — for recreation. (When someone asked if he tackles, Schulz replied, “Yes, I tackle. I’m 88 kilos [194 pounds].”)

Schulz works in a metal shop, and learned how to weld here. He plans to find a welding job when he gets out. “There’s probably a big demand for this skill in the German economy,” noted Gregg Marcantel, the head of New Mexico’s prison system, referring to the country’s car industry.

When he got here, Schulz was like most violent young men when they enter prison: He was angry. He tried to escape twice, and was forced to stay for short periods in more locked-down rooms. Like many young prisoners I’ve spoken with in the U.S., he was initially afraid and tried to toughen up so nobody would mess with him.

The difference was that he eventually realized he didn’t need to. 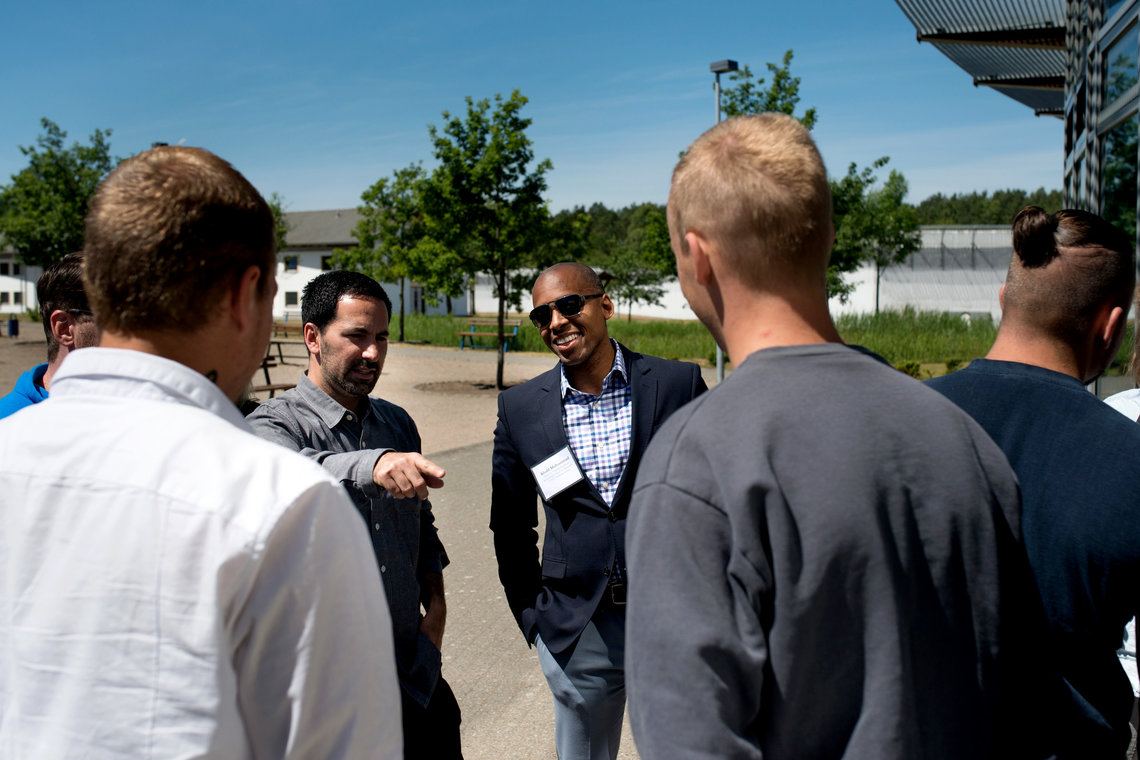 Scott Budnick, left, President of the Anti-Recidivism Coalition, and Khalil Gibran Muhammad, right, Director at Schomburg Center for Research in Black Culture in Harlem, Center talking to inmates at Neustrelitz Prison on Wednesday.

I did not get to see the early version of Schulz or the transition, but the man I met was strikingly self-assured and used words like “re-socialization” while fielding questions from dozens of curious foreigners. Marcantel joked that the young inmate could probably run the facility.

Schulz’s redemption narrative was so clean and heartwarming that it was easy to be skeptical, and many of the young men who leave this prison do, in fact, return after committing additional crimes. (We did not get the exact figures, though Schulz implied the number was high.)

But you can’t underestimate the power of a success story to push along American efforts to think more seriously and broadly about prison reform. If prosecutors are worried what victims and the general public might think if a man — who attempted to murder someone — got less than five years in prison, they could trot out Schulz, who talks about the letters of apology he sent to his victim. Did she respond? “No,” he said. “I fully understand why she wouldn’t be in touch, and it might influence her for the worst to talk to me. But I know I’ll never forget what I did.”

When Schulz gets out, he plans to move far from his home and the location of his crime, the island of Ruegen, off Germany’s northern coast, to escape his reputation and what he describes as a culture of criminality. The prison will help him find a job and an apartment. He knows he is getting a far better deal than he would in the U.S., and spoke of seeing documentaries on television about solitary confinement, “where you go years without touching even another person’s finger — it’s unimaginable." (Solitary confinement is used in Germany, but sparingly, and never for more than four weeks at a time).

When asked what advice he would have for the American justice system, Schulz was ready.

“Make prisoners realize, like they do here, that they only have one life,” he said. “I realized through therapy that I had a second chance.”