In Charleston, Echoes of Violence from 1963

A prosecutor looks back on the Birmingham church bombing.

The murder of nine men and women inside a historic African-American church in Charleston, S.C., on Wednesday has drawn comparisons to another attack on a black church in the Deep South that took place almost 52 years ago.

A bomb went off at the 16th Street Baptist Church in Birmingham, Ala., during Sunday morning services on Sept. 15, 1963. The explosion killed four little girls and injured more than 20 others. (In his eulogy at the children’s funeral, the Rev. Martin Luther King, Jr. told a crowd of more than 8,000 that “we must not lose faith in our white brothers.”) 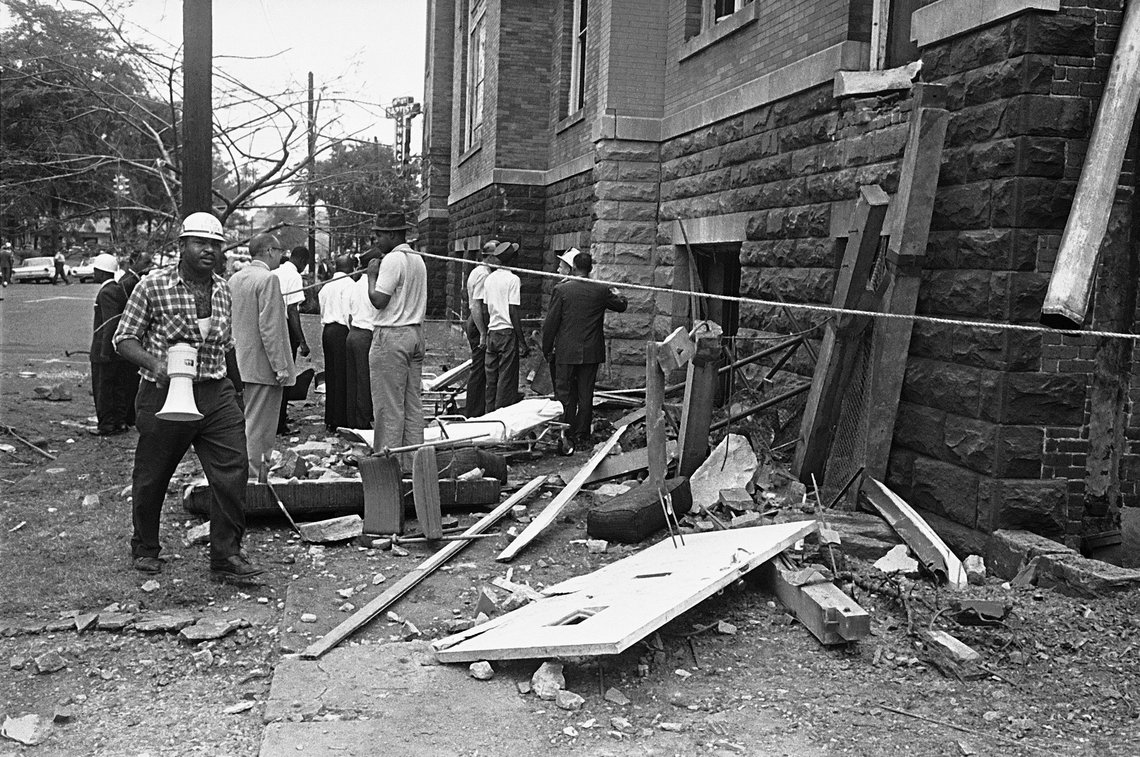 Debris near the basement of the 16th Street Baptist Church in Birmingham, Ala., where an explosion killed four girls on Sept. 15, 1963.

Three white men who were once members of the Ku Klux Klan were convicted in the Birmingham attack over the course of several state and federal investigations that spanned nearly four decades. In Charleston, Dylann Roof, a 21-year-old white man with apparent white supremacist leanings, is charged with nine counts of homicide.

Former U.S. Attorney Douglas Jones, now 61, prosecuted two of the Birmingham suspects during the early 2000s. The Marshall Project asked Jones, now a lawyer in private practice in Birmingham, to share his reactions to the attack in Charleston.

What were your first thoughts after you learned about the killings?

It was shock overall. As it would be in any situation. Also, for me sitting there watching it on television and watching it unfold, you can’t help but think about the heartbreak that occurred in Birmingham in ‘63. The heartbreak in the community and for the families. So many things came back. I worked so closely with the families during my trials, that’s what really hit. When something like this happens, it is a tragedy for the families, for the victims, but also what you are seeing in Charleston is such a tragedy for the greater community, and that’s what I was thinking.

All of a sudden, Charleston is going to be synonymous with deaths in a church for years to come. And that’s just something that they are going to have to deal with. But at the same time, it’s just like Dr. King said in his eulogy for the four girls: For every tragedy, there comes hope. And I believe that’s what will come out of this.

As a 33-year-old biracial woman who grew up in New York City, am I — and others of my generation — naive in thinking that skin color would be the sole reason for an attack so many years after the Civil Rights struggle?

I am not sure that I would use the term naive as much as it is comfortable or complacent. I think this serves as a reminder that people need to be vigilant. What I’ve seen in the last decade is a combination of political rollback of civil rights in legislation and in court cases, coupled with a rise of social media hate groups. The real danger is the lone wolf like this guy was. The guy who is going to sit down and be the angry white man in the confines of his own home, or on his own little telephone tablet, and just got angrier and angrier when he reads this pure propaganda that’s out there on the Internet these days.

I think we have been complacent in regard to what we see in this country, and the racial dialogue needs to start again.

It has been reported that Dylann Roof’s roommate said that Roof had been talking about wanting to kill people, but the roommate never reported this to the police. How can the public discern between information that should be shared with law enforcement and empty threats?

I think it’s a difficult question to ask. On the one hand, you can’t take every comment as some deep-seated hatred where some guy is going to grab a gun and start killing people. On the other hand, I think that everyone, even involving the issues in Baltimore and in Ferguson, need to dial back the rhetoric.

I keep going back to my fictional hero Atticus Finchand his comment is that you really need to walk in someone else’s shoes and see things from their perspective. We don’t do enough of that in this country. We have political rhetoric, and I think people don’t understand that the political rhetoric gets filtered in a way that’s unintended. It gets filtered in a way that absolutely creates racial tensions. Unintended consequences. If people will dial back some of the rhetoric and start trying to see things from other people’s points of view, and start having dialogues rather than monologues, then we can go a long way.

In 1963, the deaths of those four children raised the consciousness of America. It raised the consciousness of a president, of a Congress, legislatures around the country. But more importantly, the citizens of this country said, “You know what, this is not just an issue about living with segregation, this is a wrong culture that we have to change.’’

Do you fear this could be the start of more racial attacks?

I do. As former law enforcement, you always fear that. You have the fear of the lone wolf. The one thing that I haven’t done on the Internet is search around to see what these hate-filled groups are actually saying about Charleston. Whether they are applauding this guy or if they are condemning this guy. And it may be both. But at the end of the day, they are also going to see that this guy is caught. His life, if he doesn’t get the death penalty, he will spend the rest of his life in prison. They are also going to see the country’s reaction. Hopefully, the people who feel this way will find a less violent way to get a message across. I think that’s the real hope.

How did you get involved in the 1963 church bombing case?

I was nine-years-old when the bomb blew up here in Birmingham. I lived in Birmingham all my life except for one year when I worked on the Senate Judiciary Committee in Washington. In 1977, the first of the church bombers was prosecuted. The F.B.I. did a phenomenal job in the 60s, but they could not get the evidence together at the time to prosecute anyone for the bombing.

It wasn’t until a young attorney general by the name of Bill Baxley, who reopened the case and prosecuted it in 1977, that Robert Chambliss was prosecuted and went to prison. As a second-year law student here in Birmingham, I cut classes to go watch that trial. It was a dramatic moment in our city’s history. I think it was a dramatic moment for the state and for the country, never dreaming that 24 years later that I would have the opportunity to pick up where that case left off in the same courtroom where I watched as a kid.

I became the U.S. Attorney in 1997 just after this case had been reopened by the F.B.I. and the Justice Department, and took over the investigation. We went pretty intense with the investigation, although people may recall that we had to put it back on the shelf in January in 1998 when we had another bombing in Birmingham. Eric Rudolph exploded a bomb at a women’s clinic that killed a police officer and wounded a nurse based on his opposition to abortion. That set us back a little bit. Ultimately we moved the case over to state court where I was a Special Assistant Attorney General and we prosecuted two individuals: a guy named Tommy Blanton and a guy named Bobby Frank Cherry for the murder of those four little girls.

Both were convicted, both went to state prison in Alabama. Bobby Frank died about three years later. Tommy Blanton is still serving life in prison.

In the wake of the Charleston murders, do you feel that the impact of the Birmingham case somehow failed to take hold?

Not at all. There are some people you can’t get through to. I think that overall, the message is still there. We’ve come light years from where we were in 1963, both as a state in Alabama and as a country. But I think we would be a little bit naive to think that we still don’t have a ways to go. And I blame the politicians a lot. I think that politically, there is so much rhetoric, they don’t realize the unintended consequences of some of the things that they say.

There are still symbols around the country that need to be reigned in like the Confederate flag and symbols of hate that are still out there. People need to speak up.

You brought up the Confederate flag. What are you thoughts on the fact that South Carolina still flies the flag on the statehouse grounds?

There is no question that words and symbols matter. No one can look at a swastika, even if it’s in some ancient hieroglyphic, no one can look at a swastika these days without seeing the hate. And unfortunately, and I say unfortunately as a son of the South, there is a certain amount of history that a Confederate flag involves. There is no question now that the Confederate battle flag has turned into a symbol of hate. And especially a state government for God’s sakes should not be displaying, actively displaying a symbol of hate, the way it’s being displayed in South Carolina.