How the Law Will Adapt to Oregon’s Legalized Pot

Oregon today became the fourth state to legalize recreational use of marijuana. Under the package of laws, anyone 21 and older can carry up to an ounce of cannabis (enough for 30 to 40 generously sized joints) and grow up to four plants in their home.

Crowds in downtown Portland began celebrating at midnight, but there’s still a catch. Oregonians can’t legally buy recreational marijuana until dispensaries open in the state next year. The legislature is considering a bill to allow medical dispensaries to sell to recreational users. Until that’s settled, though, Oregonians who want to smoke will need to grow their own or poach a roach from friends. 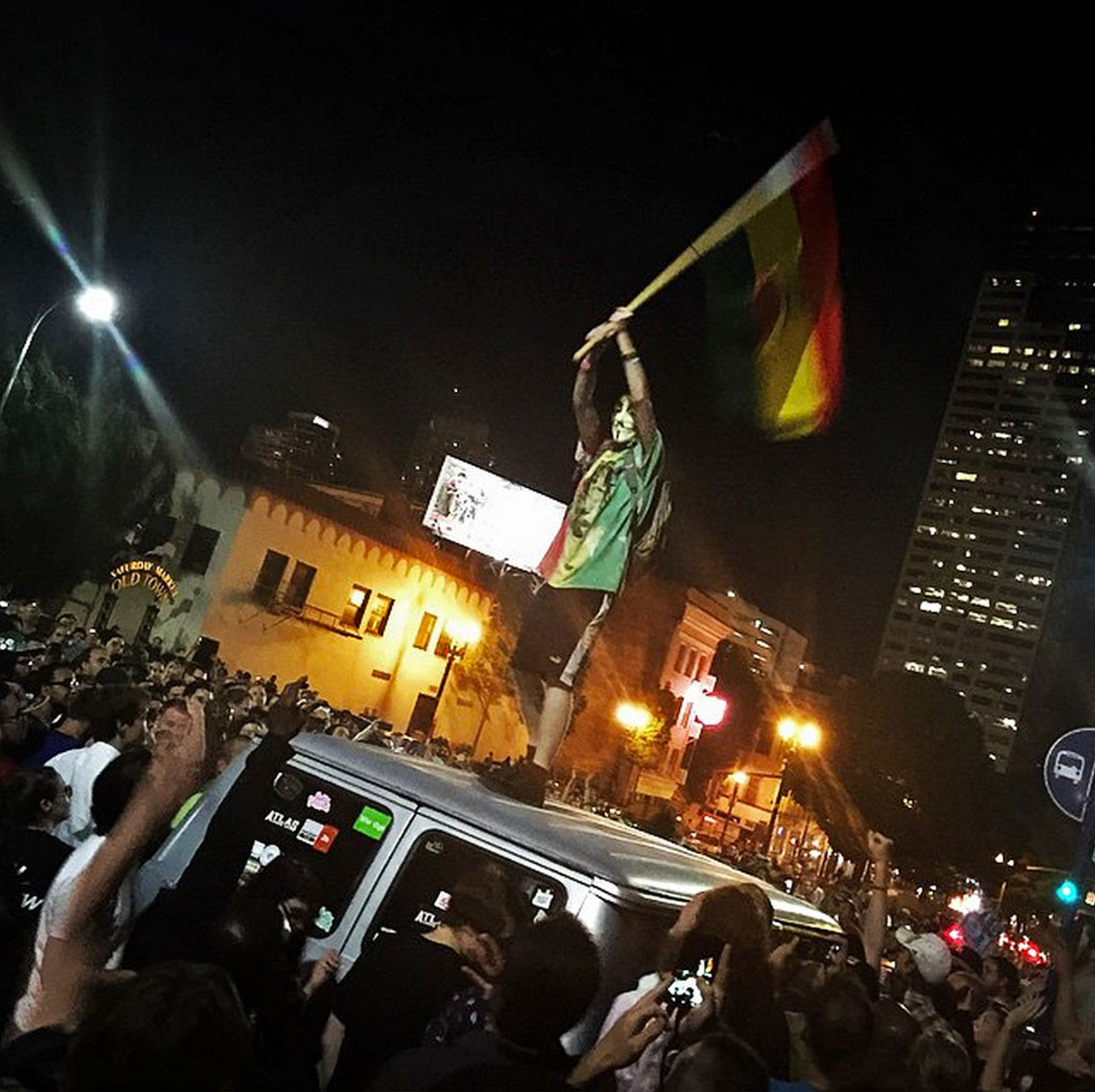 A gathering in Portland, Ore. on June 30, before recreational marijuana became legal at midnight.

So pot may be legal now in Oregon (as it is for recreational use in Alaska, Colorado, and Washington), but here are some immediate, as well as lingering, effects on law enforcement both in Oregon and beyond that officials will be dealing with.

What about those old marijuana convictions?

If you’re currently in jail or prison for a marijuana-related felony — like selling large amounts — you’re out of luck. But if you have a less serious offense — like growing a few plants in your garden — you may be eligible to have your record expunged.

Existing laws allowed some old charges to be cleared from the record, but Oregon’s new law on recreational use goes further — and is especially helpful to minors.

Arrests for unlawful manufacturing of marijuana and delivery to a minor can now be expunged after three years. A minor charged with unlawful possession, delivery, or manufacture can have his or her record expunged after one year.

The waiting period to have an unlawful-possession charge expunged remains at three years, but that charge is no longer a Class C felony (which can result in a five-year stint in prison), but a Class A misdemeanor (with a maximum sentence of a year in jail).

“This is a very big deal,” says Amos Irwin, chief of staff at the Criminal Justice Policy Foundation, a Maryland-based drug policy organization. “I think that we’ve all noticed a huge shift in politicians willing to be smart on crime rather than tough on crime.”

How will police have to adapt?

“We’re in a transformative period as drug-impaired driving becomes a bigger issue,” said Sgt. Evan Sether of the Oregon State Police. He oversees a statewide program that began in 2007 to train officers to recognize drivers under the influence. Because there is no breathalyzer-like test for cannabis, officers are taught to look for visual cues (excessive sweating, bloodshot eyes) and behavioral red flags (paranoia, loss of balance) to determine if a driver is high.

“We’re just trying to ramp the program up,” Sgt. Sether said. He added, “The goal is to get all 350 state patrol officers trained in the intermediate course,” which involves 16 hours of follow-up instruction to the basic academy training all officers receive. Currently, about 100 state police officers have completed the program.

Meanwhile, Oregon law enforcement officials are grappling with another pedagogical question: Can you teach an old dog new tricks? “You cannot un-train a dog to smell marijuana,” said Clackamas County Sgt. Don Boone, who handles one of his department’s K-9s. When police dogs alert officers to the presence of hidden cannabis, the officers have probable cause for a physical search. Most K-9s are trained to identify other narcotics too — psychedelic mushrooms, heroin, cocaine — but because the dogs will continue to bark for legal amounts of marijuana, they can no longer assist officers with searches.

Don’t expect the dogs to be put up for adoption, though. There are plans to move the police dogs into prisons and schools, where marijuana remains illegal contraband in Oregon.

What is the reaction from law enforcement in Oregon’s weed-friendly northern neighbor?

Washington, which shares a 350-mile border with Oregon, legalized marijuana for recreational use in 2012 and currently licenses several hundred retail outlets to sell it. Oregon’s July 1 legalization marks the first time that two bordering states have allowed recreational use of marijuana. The close proximity, combined with the fact that the first retail establishments in Oregon are not expected to open until 2016, raises unique questions about where Oregonians are going to get their newly legal weed, and how the police will react to users bringing marijuana across state lines, which is still a federal offense.

Despite those questions, law enforcement agencies in neighboring states are reportedly making no changes in their drug-enforcement policies. “There are no directives from the attorney general to law enforcement [regarding Oregon’s legalization],” said Peter Lavallee, Communications Director for the Washington Attorney General’s Office. “It’s business as usual. We don’t have a reaction. Our role is to uphold the will of the voters of Washington.”

Sort of. You won't be seeing any bongs, baggies, or leafy plants in the Gopher state (well, maybe you will, but not legally), the way you might in Oregon, where recreational users are now allowed to have up to eight ounces of pot.

Minnesota's approach, instead, is strictly medical. You’ll only be able to get your hands on (legal) marijuana if you A) register with the state; B) see a doctor; C) are diagnosed with a severe condition, such as epilepsy, cancer, or AIDS, and D) make the trip to one of eight certified dispensaries, which may be over 100 miles away. (Those dispensaries are operated by only two providers, which means that the costs will be high.) And even if you do receive a prescription, it will be for a vial of pills or THC-infused oils; no actual marijuana is allowed, nothing smokeable.

This very restrictive model of legalization has not been tried by any other state, and it has yet to catch on with Minnesotans. As of last Friday, only 65 people had registered in a system designed for 5,000.