Back on the Agenda: Nebraska’s Death Penalty

A grassroots effort aims to restore what the legislature just ended.

Supporters of the death penalty in Nebraska have gathered enough signatures to put the issue to a public vote during the general election in November 2016. The supporters needed roughly 57,000 votes. They collected 166,692.

At the front counter of Dinkel Implement Co., a farm equipment dealer in Norfolk, Neb., there is a sheet of paper that voters can sign to bring the death penalty up for a public vote in their state. There is a similar petition at Allied Securities, a car insurance agency, and starting next week, a storefront in Norfolk will be open from 3 p.m. until 6 p.m. every day, with the sole purpose of collecting signatures. “People coming in seem to be passionate about it,” says John M. Dinkel, co-owner of the farm equipment store. “Most people are thankful, and they exercise their constitutional right” and sign the petition. 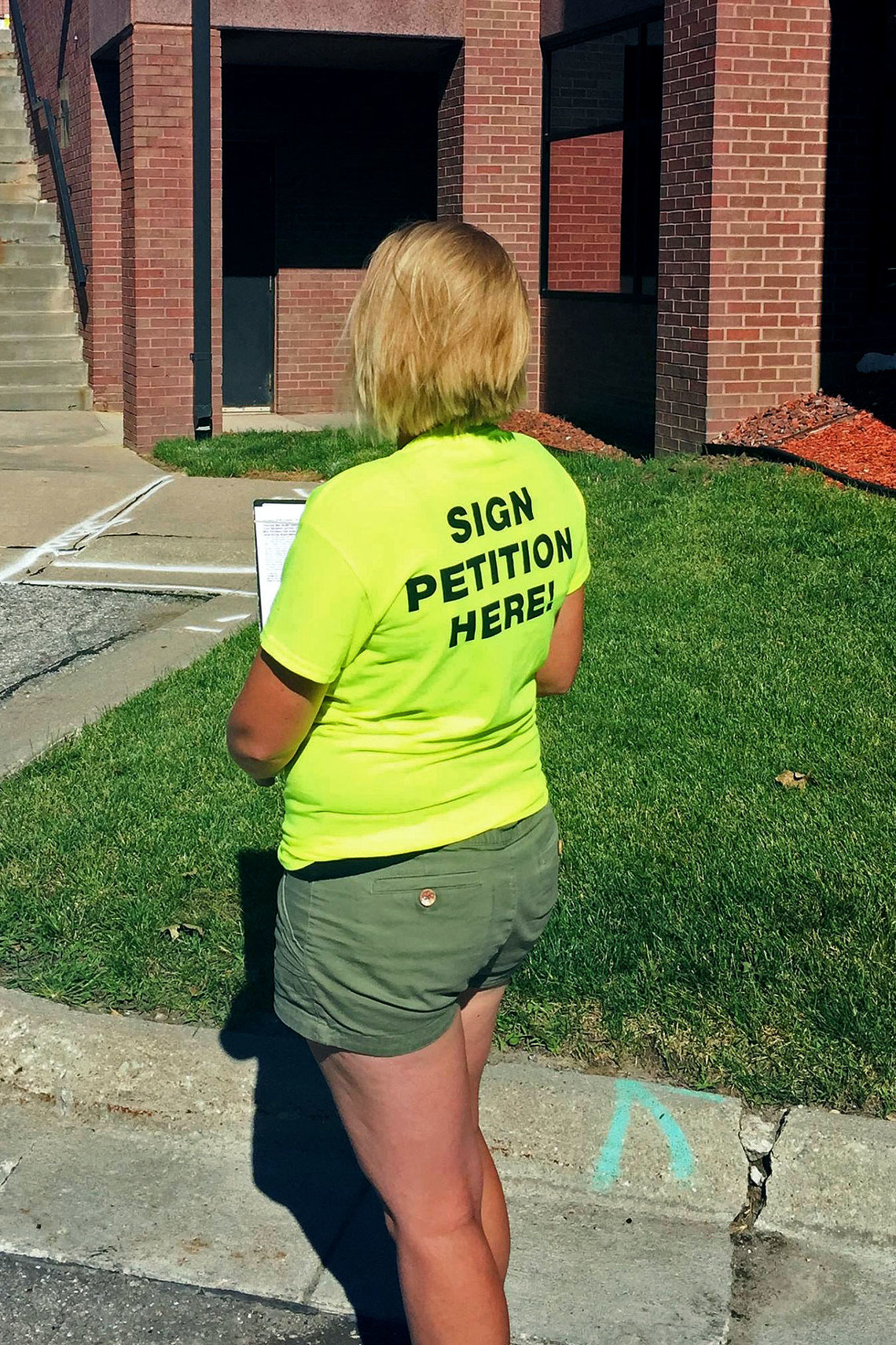 A volunteer for Nebraskans for the Death Penalty in June.

In May, the Nebraska Legislature voted to repeal capital punishment. Gov. Pete Ricketts vetoed the repeal, and the legislature overrode the veto by a single vote. Opponents of the death penalty celebrated this unprecedented moment — the end of the death penalty in a conservative state — and saw it as an indication of how conservatives have turned against the punishment.

But since the vote, supporters of the death penalty have been scrambling and have a serious shot at overriding the override of the veto. A group called Nebraskans for the Death Penalty has opened offices in Omaha and Lincoln. They are aiming to collect 57,000 signatures, or 5 percent of the state’s voters, by the end of August in order to put the question on a ballot next year. If they get twice as many signatures, the repeal will be officially halted, and prosecutors will be able to keep pursuing death sentences.

On a well-trafficked Facebook page, they are announcing where Nebraska voters can sign the petition (jewelry stores, courthouses, car dealerships, DMV offices) and posting pictures of men and women approaching strangers to get their signatures on street corners and in mall parking lots. The organization is seeking volunteers to go door-to-door and run phone banks.

Though these efforts are grassroots, Nebraskans for the Death Penalty have well-heeled help. Financial records released last week show Ricketts donated $100,000 to the campaign, while his father, Joe Ricketts, the founder of TD Ameritrade, donated the same amount. (The family also owns the Chicago Cubs). The anti-death penalty community is also fundraising.

Much of this is symbolic; Nebraska last carried out an execution in 1997, and is facing a shortage of lethal injection drugs that would slow efforts to carry out another one anytime soon. There are 10 men on the state’s death row.

But the success or failure of Nebraskans for the Death Penalty will be a barometer of how deep American support for the death penalty goes. For years, polls have shown that capital punishment is dipping in popularity, though it remains above 50 percent (the latest Pew Research Center poll found 56 percent of Americans still support executing murderers).

That support has not been seriously tested lately. In the 1970s, when capital punishment was struck down and then reinstated by the Supreme Court, newspaper editorials and public rallies on both sides of the issue were common. Since then, with the death penalty in regular use, supporters have become a silent majority, with the exception of a few pro-death penalty message boards featuring vitriolic rants against murderers on death row.

Now that the death penalty is being challenged, grassroots support for the punishment is becoming visible, in the form of bright green T-shirts that read “Support Death Penalty” and “Sign Petition Here!” Some of those organizing in Nebraska are family members of murder victims, like Vivian Tuttle, who is being featured in local press and whose daughter was shot during a 2002 bank robbery in Norfolk (“I believe in justice,” she told the Holt County News).

Some citizens without a specific stake in capital punishment — as well as newspaper editorials — are framing their support in terms of democracy. “I feel that the citizens have a right to vote on it,” Ron Stauffer, who opened the storefront in Norfolk, told me. “If the death penalty is voted out by the people that is fine with me.” Stauffer said that the state’s lawmakers had voted against capital punishment based on “their own convictions,” which, he said, “is not what they are there for.”