Sara Bennett has been a criminal defense lawyer in New York for 30 years. She has represented men and women who have committed terrible acts; many have spent decades in prison, some have died there.

“The longer you’re an attorney the more serious your cases are,” she said, recalling a 16-year-old client who was sentenced to life without parole for murder. “I never forgot him.”

“When you send people away for life,’’ she says, “you’re saying there’s no hope. That they’ll never be rehabilitated.” And yet, she adds, “People are more than their worst act. People are complicated.”

It was after completing a photography project a couple of years ago that Bennett, now 59, realized that her images could reveal what years before judges and juries could not: a more complete picture of ordinary lives upended by extraordinary circumstances.

Each of her subjects was convicted of murder, she said, and “I want people to think, ‘So this is what a murderer looks like’.” 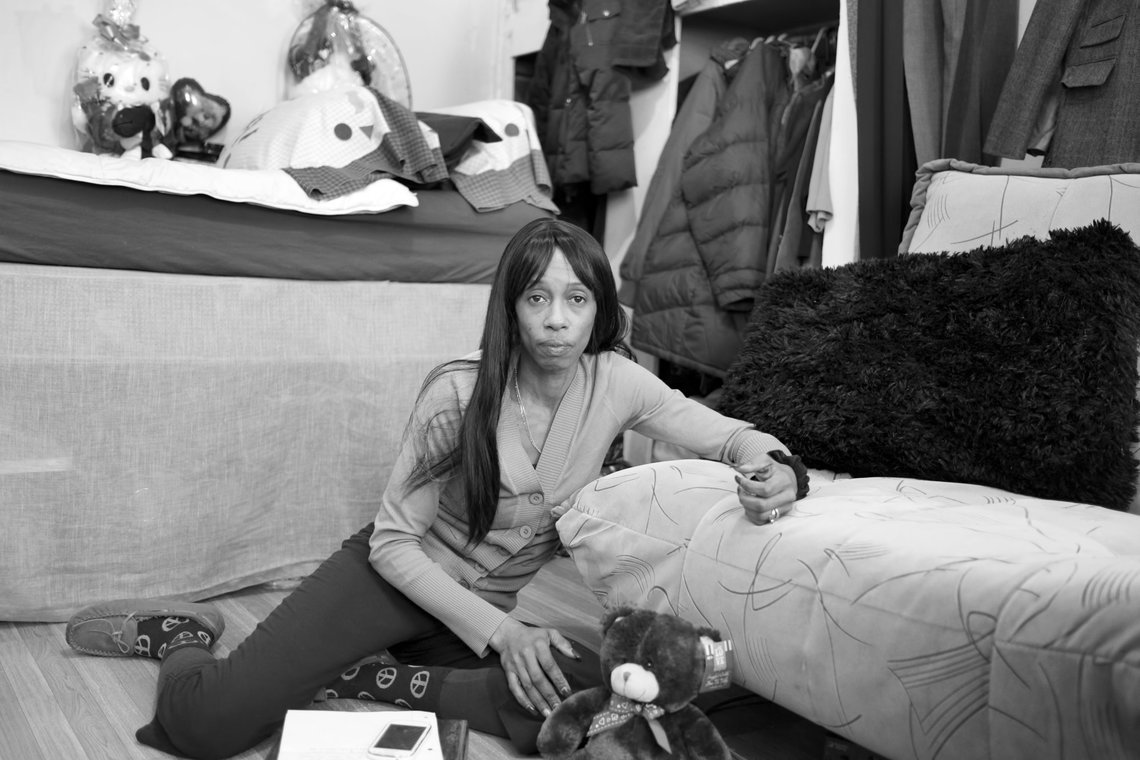 Tracy, 49, living in a three-quarter house in the South Bronx, one of five residences she’s had since her release from prison.

All had been sentenced to terms of up to life in prison, and all had been denied parole at least once, sometimes repeatedly. “There’s a different quality to the way you serve your time,” said Bennett, speaking about a potential life sentence. “You’re hoping [to get out] but you don’t know if you’re ever going to get out.”

But the women did get out, and in New York in 2014 Bennett followed them through the new routines of their lives—on the subway, at their jobs, in counseling sessions, at home.

Bennett spent 18 years at The Legal Aid Society in New York, then, in 2004, began representing individual clients pro bono. For the past eight years she has been the sole legal representative for Judith Clark, an inmate at Bedford Hills serving 75 years-to-life for her role in the 1981 Brinks robbery that left three people dead.

It was Clark who put Bennett in touch with the women who eventually became the subjects of her photographs. But it was her work as a litigator that made introductions even easier. In a meeting with Keila and other former prisoners in 2014, Bennett said, “I explained my project and somebody was like, ‘Hey, wait a minute you were so-and-so’s attorney.’

“Every photographer figures out their own way of getting access and gaining trust, Bennett says. “I think I already came with a reputation.” 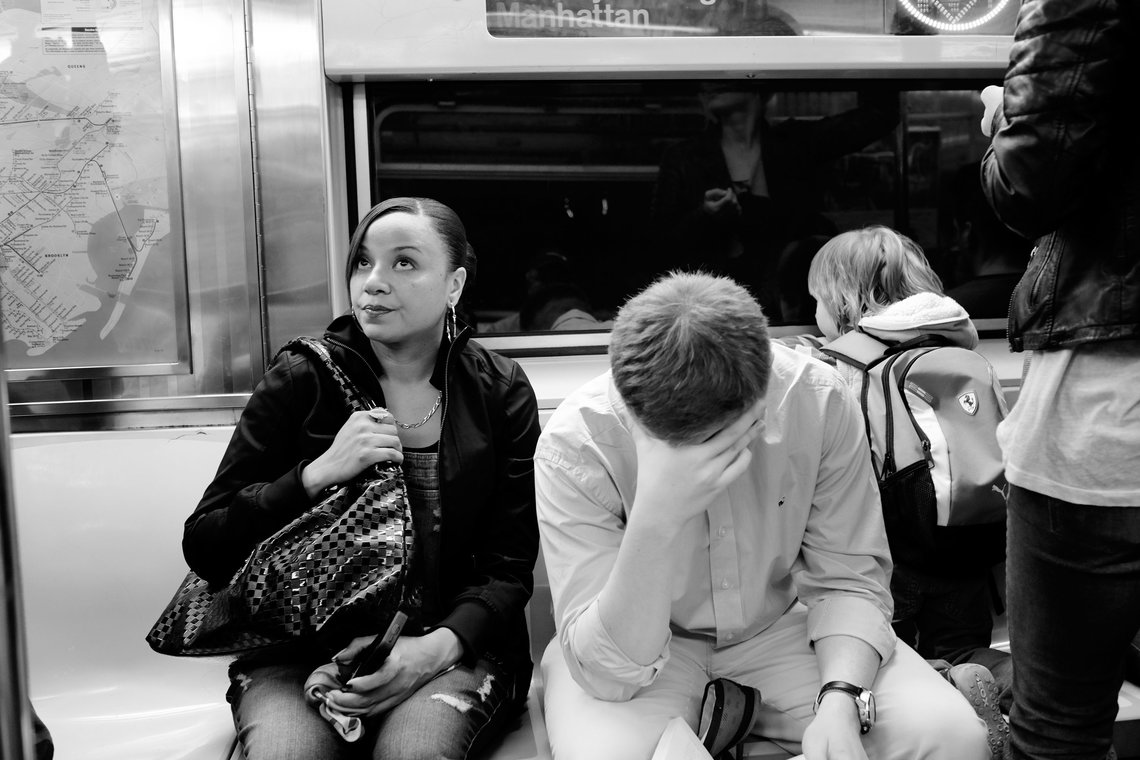 Keila, 40, almost a month after her release, on her first subway ride in 20 years. 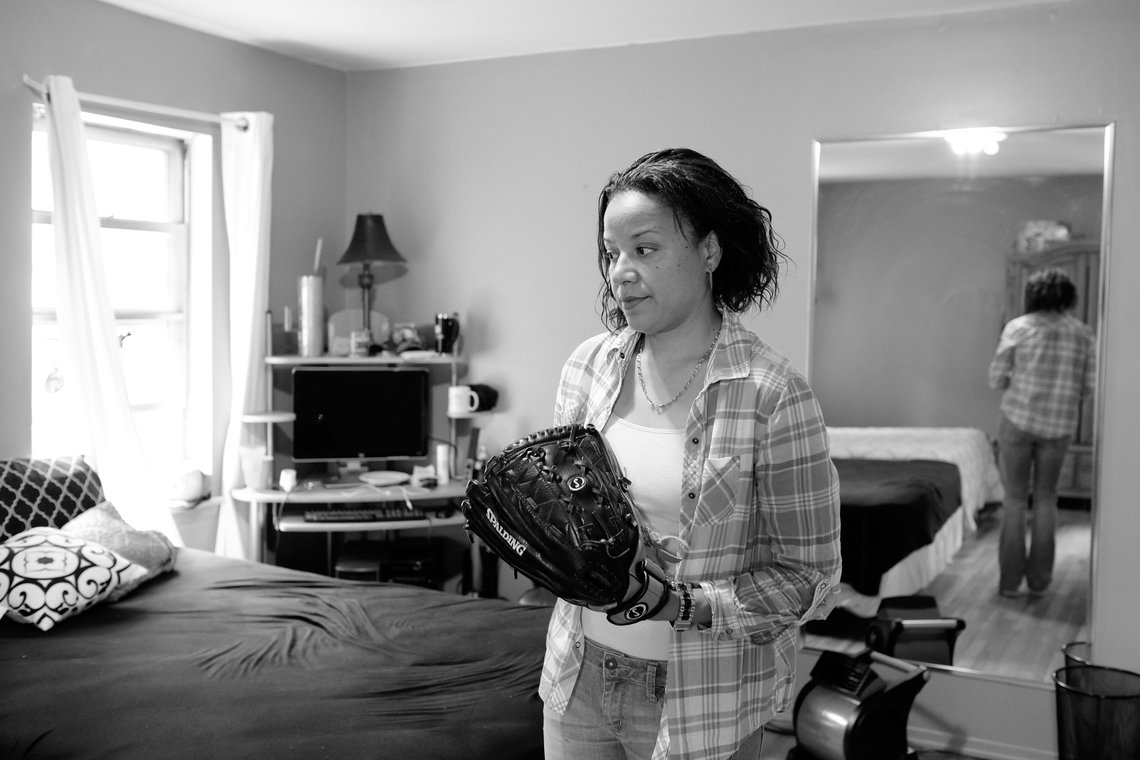 Keila at her cousin’s home on Long Island, above, where she lived after her release from prison. 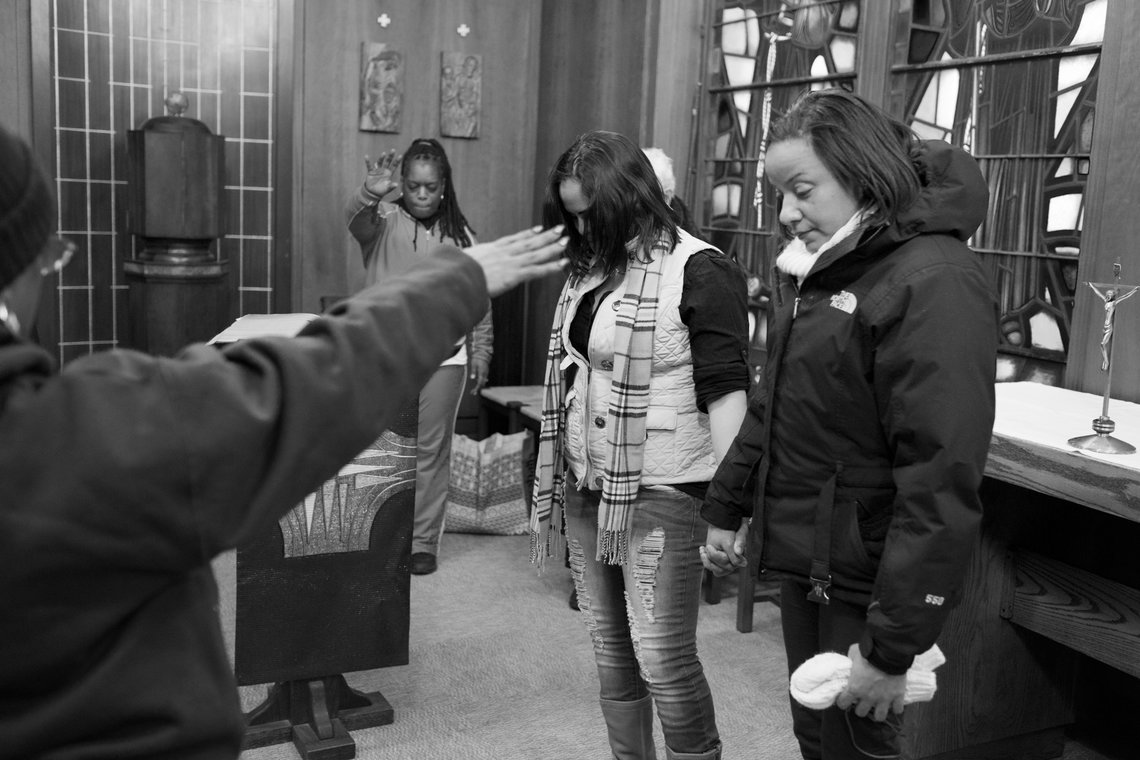 Keila at a religious retreat with other former prisoners in Brooklyn. 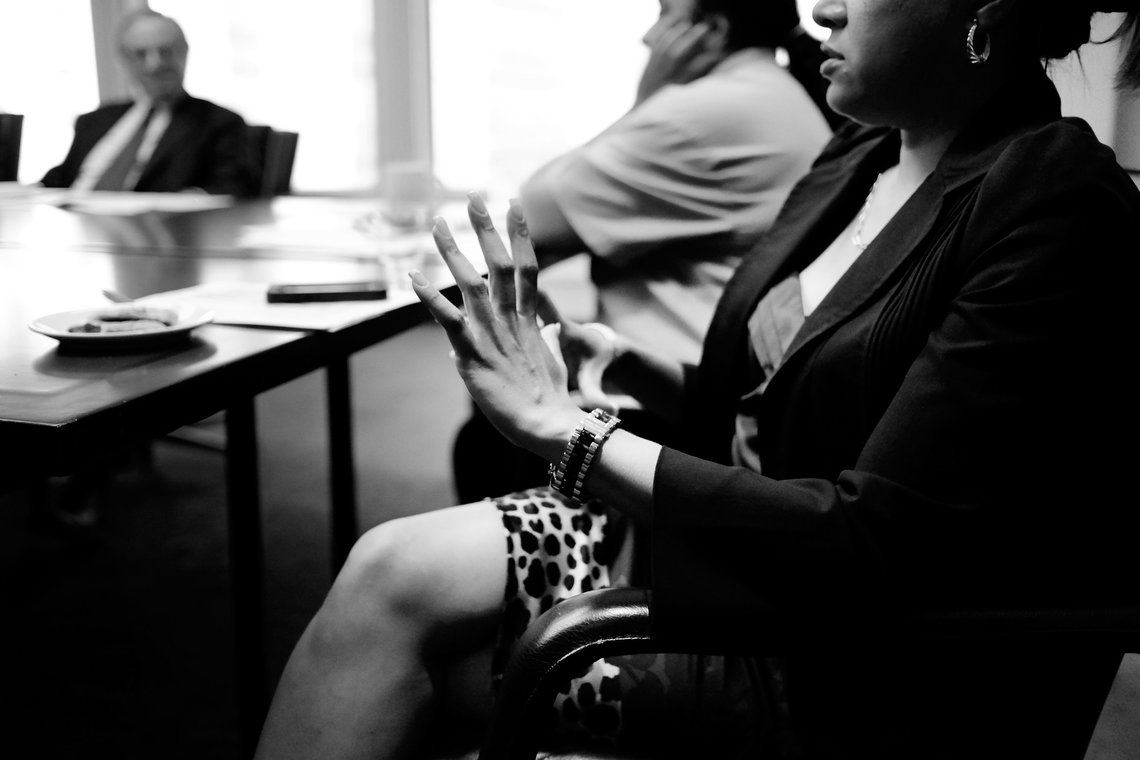 Keila meets with the board of directors of Healing Communities Network, a non-profit ministry, that ran a program at Bedford Hills Correctional Facilities that Keila participated in. 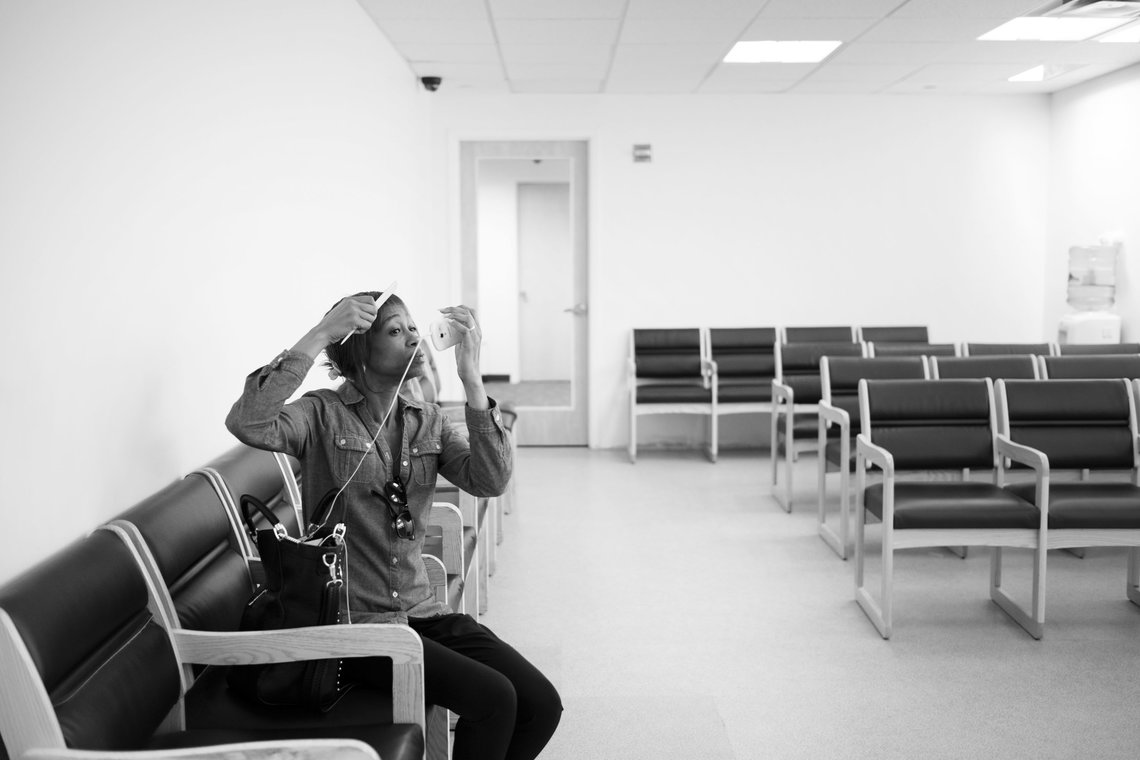 Tracy waits to meet with her counselor in Brooklyn. 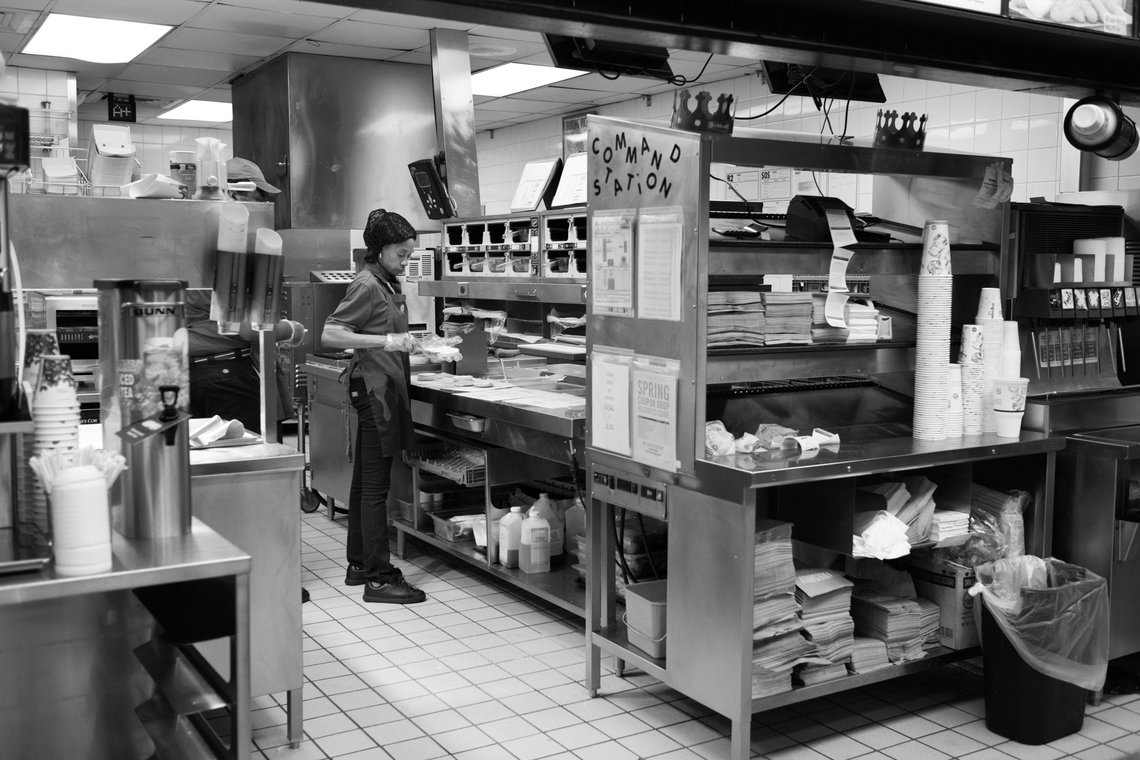 Tracy works during the night shift at a Burger King in mid-town Manhattan. 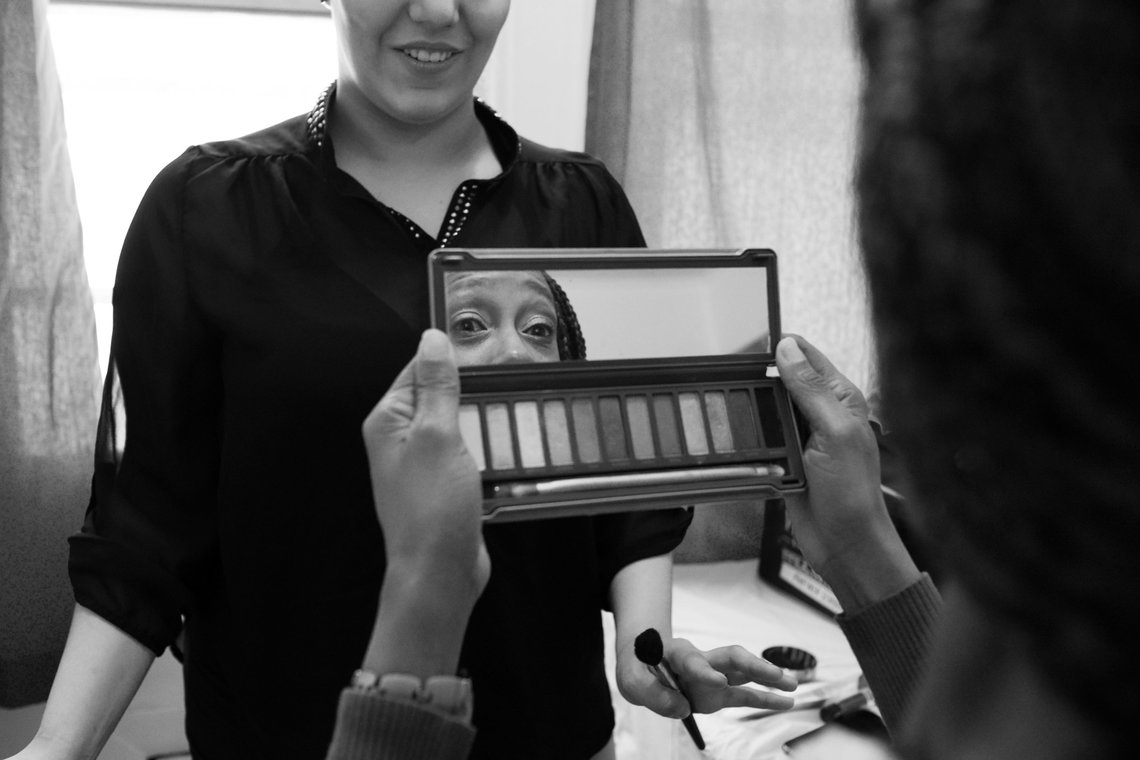 Tracy has her make-up applied by a family friend at her daughter’s home in Bergenfield, N.J. 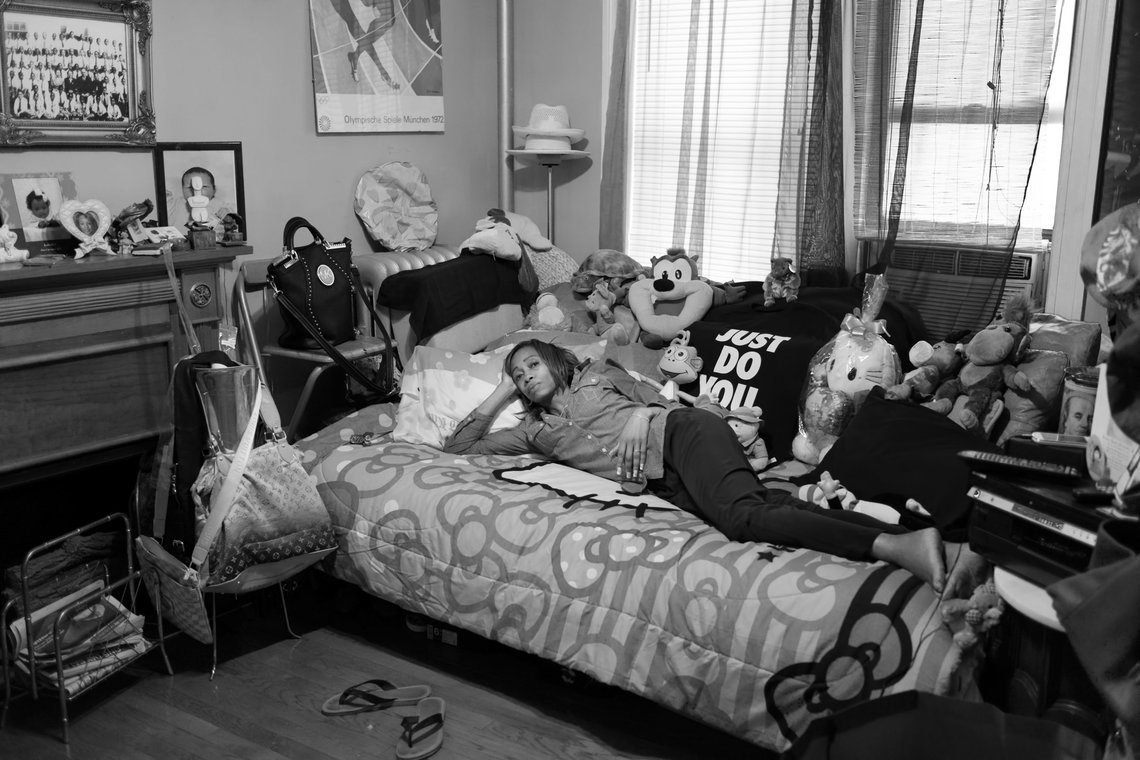 Six months after her release, Tracy lives at an apartment of a relative of one of her grandchildren in Harlem. 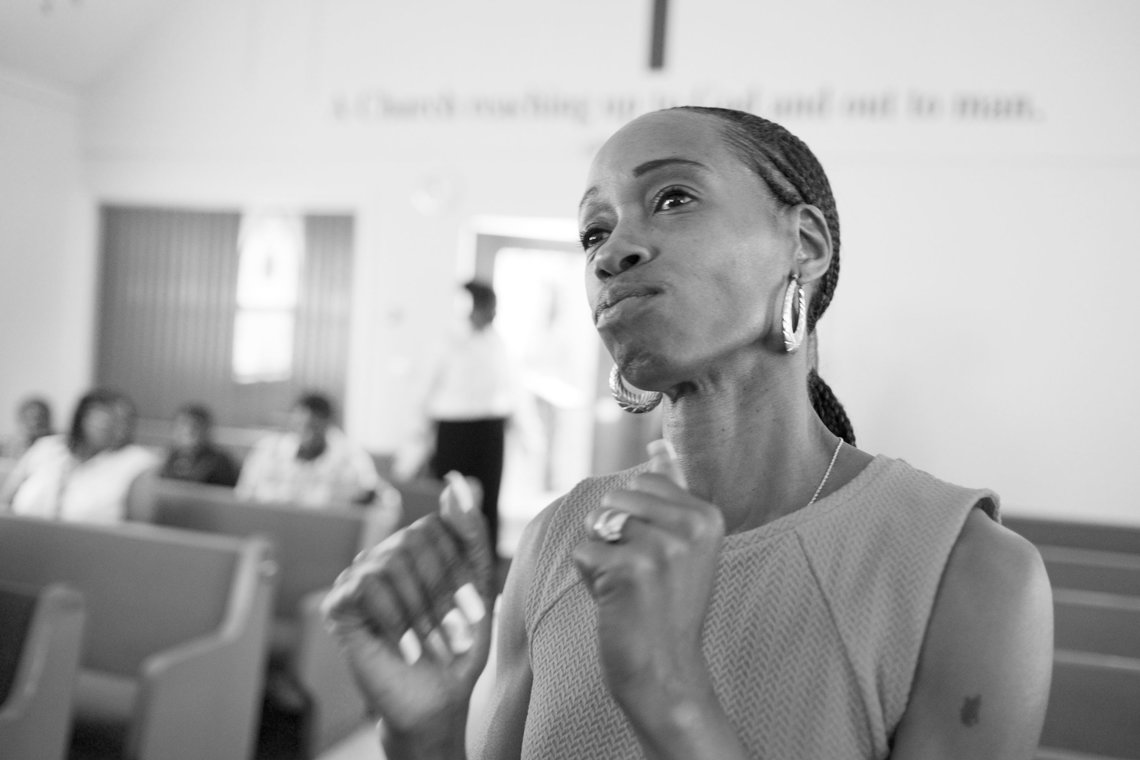 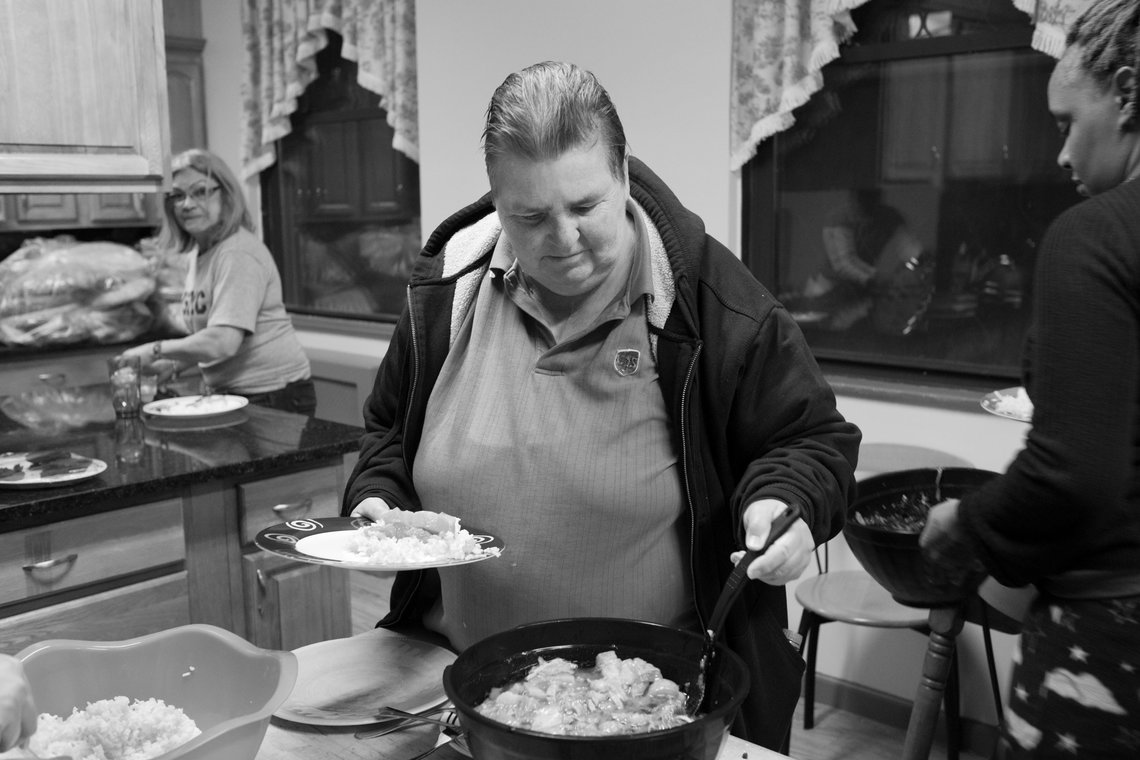 Carol, 65, attends a communal dinner at her transitional housing in Long Island City. 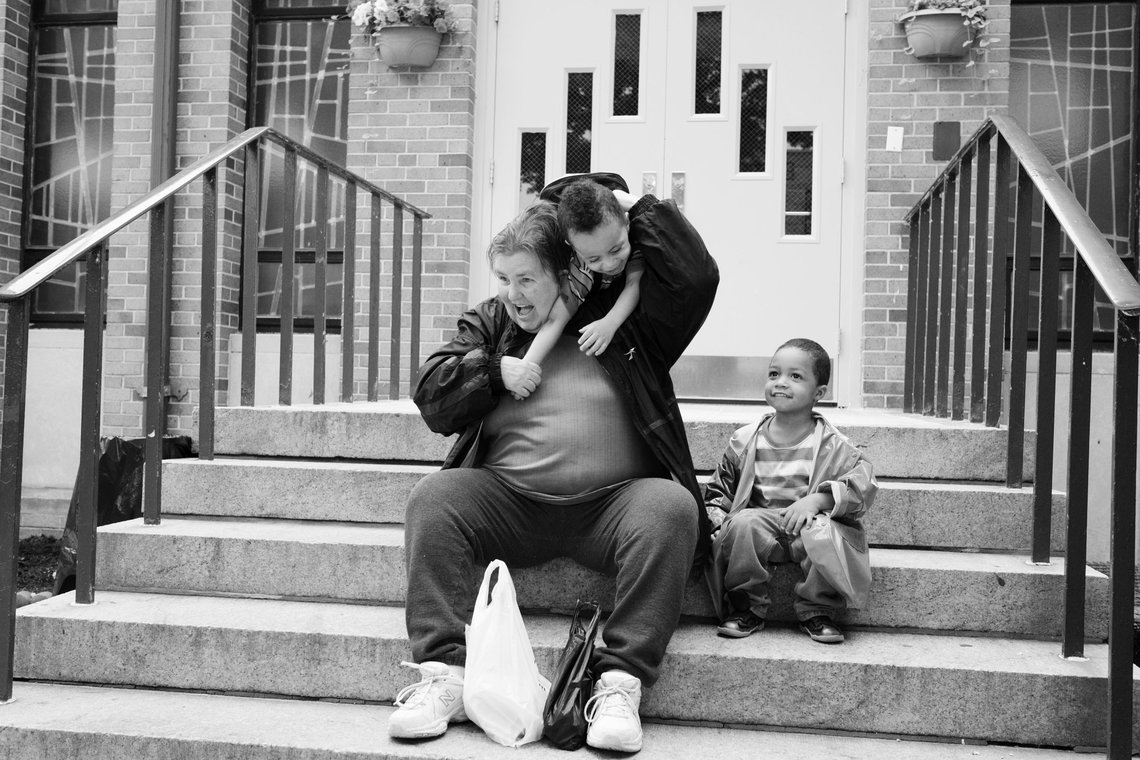 Carol, one year after her release on Mar. 18, 2014, with the children of a neighbor Cecil and Darjay. They all live in housing provided by Hour Children, an organization that provides services to formerly incarcerated women. 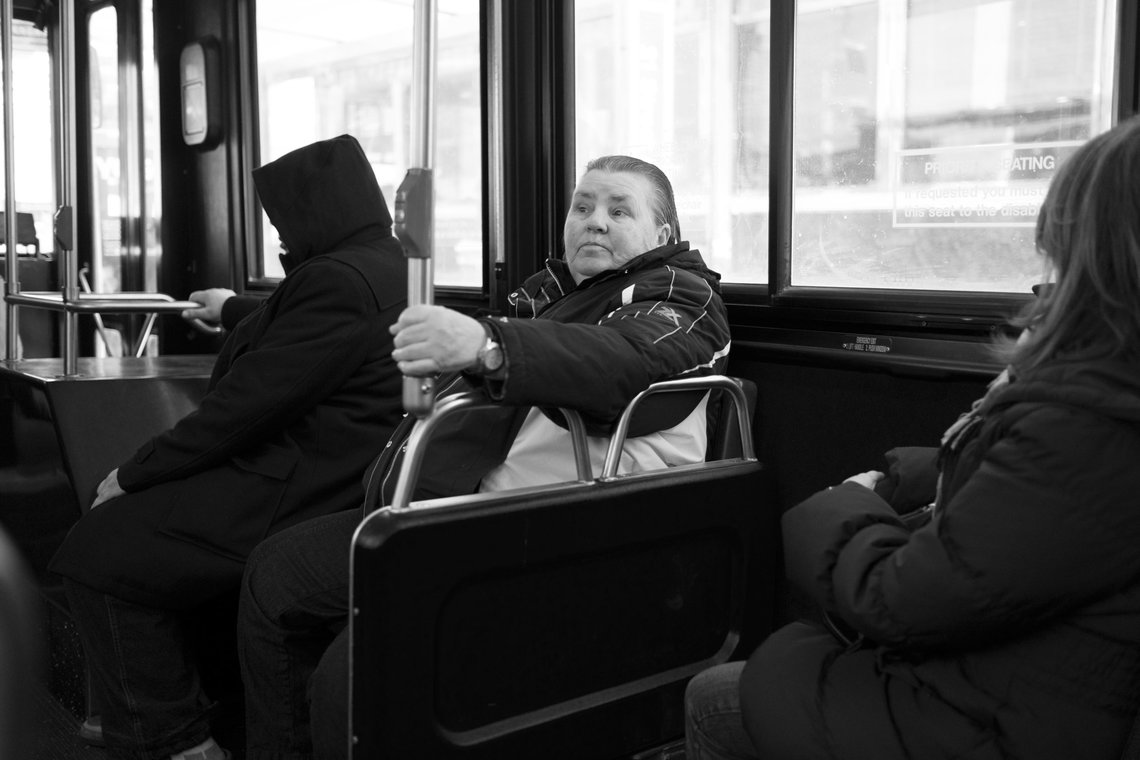 Carol takes the bus to her cardiologist’s office. 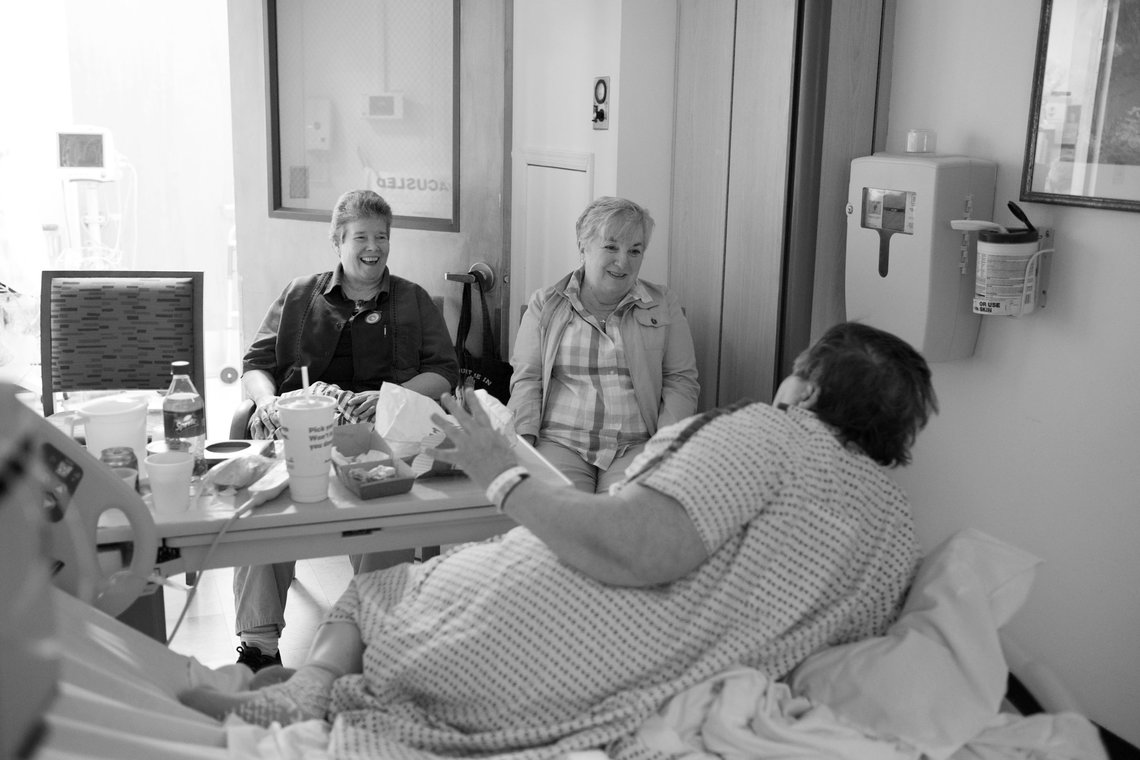 Carol had two heart attacks in prison. Her friends, Kelly, left, and Tina visit her at Mount Sinai Medical Center in Long Island City where she receives treatment for heart disease. 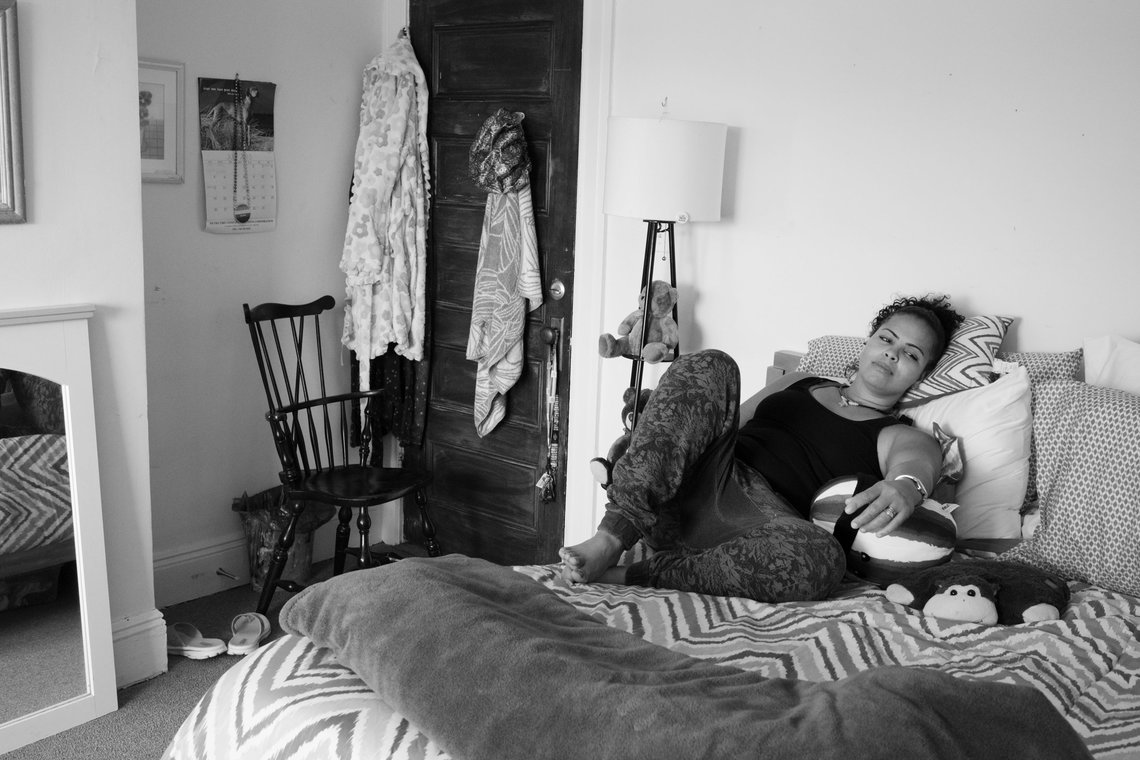 Evelyn at home in Flushing. 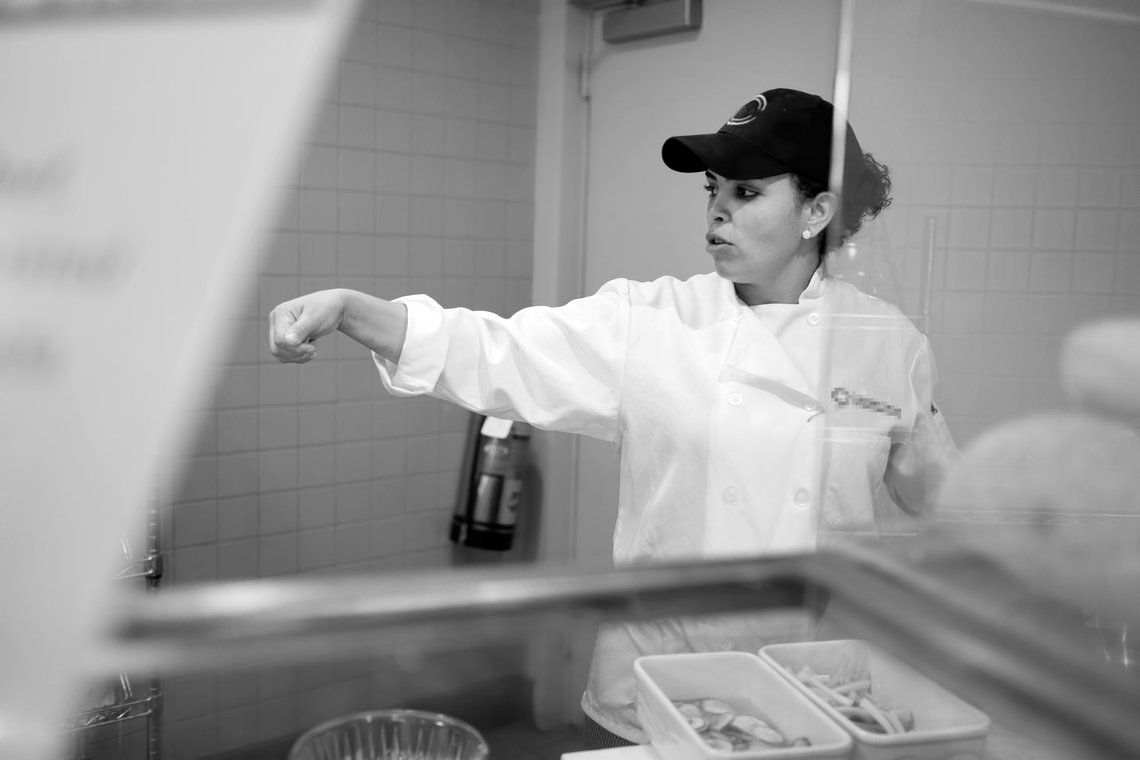 Evelyn at work in the cafeteria of the World Financial Center in Manhattan. 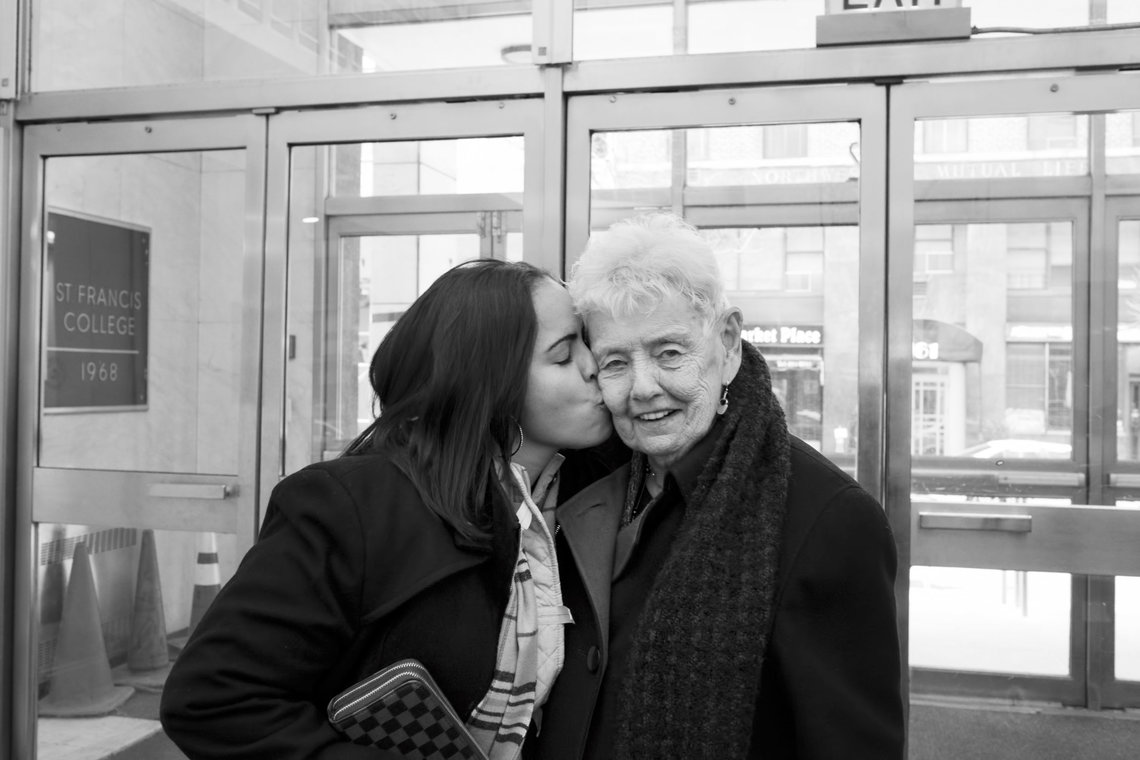 Evelyn meets with Sister Elaine Roulet, a nun who worked at Bedford Hills Correctional Facility, at a spiritual retreat for formerly incarcerated women in Brooklyn. 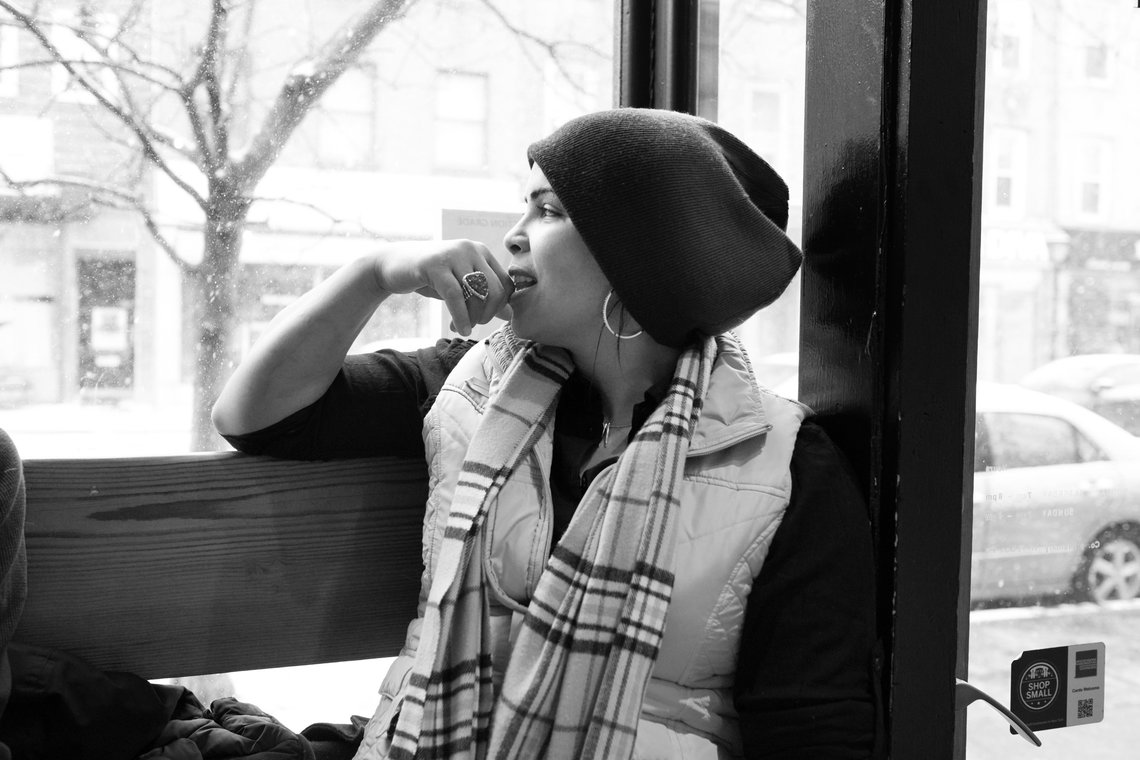 “Life After Life Inside” is on view at The Passage Gallery at the State University of New York, Purchase until October 18, 2015. Visit her website at www.lifeafterlifeinprison.com