Meet the Federal Prisoners About to be Released

They are mostly black and Hispanic men. The average age is mid-30’s. Their drug of choice was cocaine (powder or crack) followed by methamphetamine. They are most likely to be returning to southern states (led by Texas.) Some have served more than 25 years.

This week we learned that at the end of October the Bureau of Prisons will release about 6,000 federal prisoners — and ultimately as many as 46,000 — who were convicted of drug offenses for which sentences have since been reduced. State and federal prisons release twice that number every week as inmates serve out their time, but 6,000 at once is an event — “the largest one-time federal release,” as The Washington Post put it.

So who are they?

The Bureau of Prisons and the U.S. Sentencing Commission have not released the names of those being set free. But in August the Sentencing Commission, an independent judicial body that generated the new sentencing policy, published a detailed breakdown of the cases that had been decided (granted or denied) by July 24. It includes data on 17,446 applicants for early release, 13,187 of whom have been scheduled for freedom in coming months, including most or all of the first 6,000. The data include all 50 states plus Washington, D.C., Puerto Rico and the Mariana Islands, which encompass Guam.

We have uploaded the full report, but here are some highlights:

Home: More than half of those due for release were convicted in the South, 16 percent from Texas alone. Iowa, with less than one percent of the U.S. population, accounts for more than 6 percent of the released drug offenders, perhaps reflecting the surge of meth across the white Midwest.

Where Are They From?
NOT SHOWN: Washington D.C. (45), Puerto Rico (218) and the Mariana Islands (1)
Source: U.S. Sentencing Commission

Citizenship: Nearly a quarter of those to be released are non-citizens, most of whom face time in an immigrant detention facility, followed by deportation. 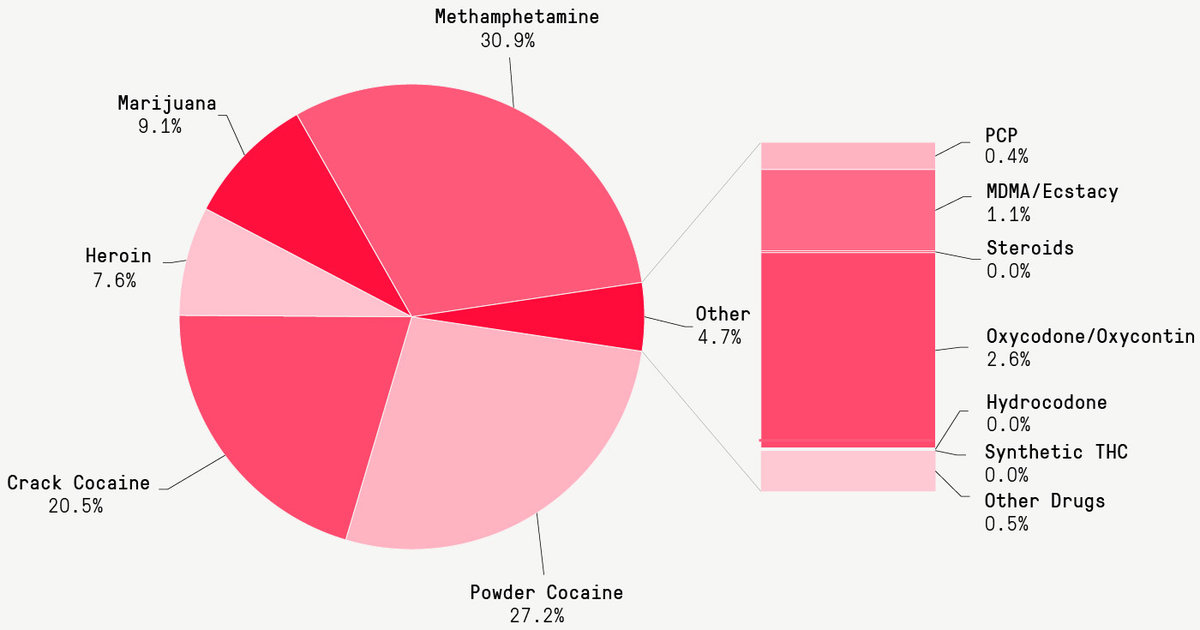 NOTE: Of the 13,187 cases, information on drug type was missing in 229 cases.
Source: U.S. Sentencing Commission

Gender: About 7 percent of those released are women. (Fully half of them convicted of methamphetamine offenses.)

Time served: The average prisoner will have served nine years, reduced from nearly 11 years, a drop of 18 percent. Central Illinois had the biggest average percentage drop: 27 percent. That was followed by the middle district of North Carolina (24 percent), the middle district of Georgia (24 percent) and North Dakota (22 percent). Five of the offenders were sentenced in 1989.

Denials: Most denials were for technical reasons, but judges cited "protection of the public" 119 times when denying a sentence reduction. They blamed an inmate's behavior after sentencing or conviction for their denials 63 times.