Can Courtroom Prejudice Be Proved?

The Supreme Court considers what it takes to show that prosecutors, when they pick juries, are discriminating against minorities.

The U.S. Supreme Court decided Monday 7-1 to side with Timothy Tyrone Foster over his claim that black jurors were improperly struck from the jury that sentenced him to death. The case has been sent back to lower courts in Georgia for further proceedings.

Writing for the majority, Chief Justice John Roberts noted markings of the letter “B” next to the names of black jurors in prosecutors’ notes. “The focus on race in the prosecution’s file plainly demonstrates a concerted effort to keep black prospective jurors off the jury,” the jurist wrote. He added, “Two peremptory strikes on the basis of race are two more than the Constitution allows.”

The sole dissent came from Justice Clarence Thomas — the court’s only African-American member — who wrote that his colleagues should have deferred to lower courts, which found that prosecutors gave credible “race-neutral reasons” for striking the black jurors.

“This discrimination became apparent only because we obtained the prosecution’s notes which revealed their intent to discriminate,” Stephen Bright, Foster’s attorney, said in a statement. “Usually that does not happen. The practice of discriminating in striking juries continues in courtrooms across the country.”

For decades, scholars who have analyzed death-penalty cases have consistently found racial disparities, with death sentences disproportionately handed down to black men, more often in cases with white victims.

But defense lawyers who want to challenge these sentences continue to face a predicament: How do you prove that racial discrimination infected a specific case? 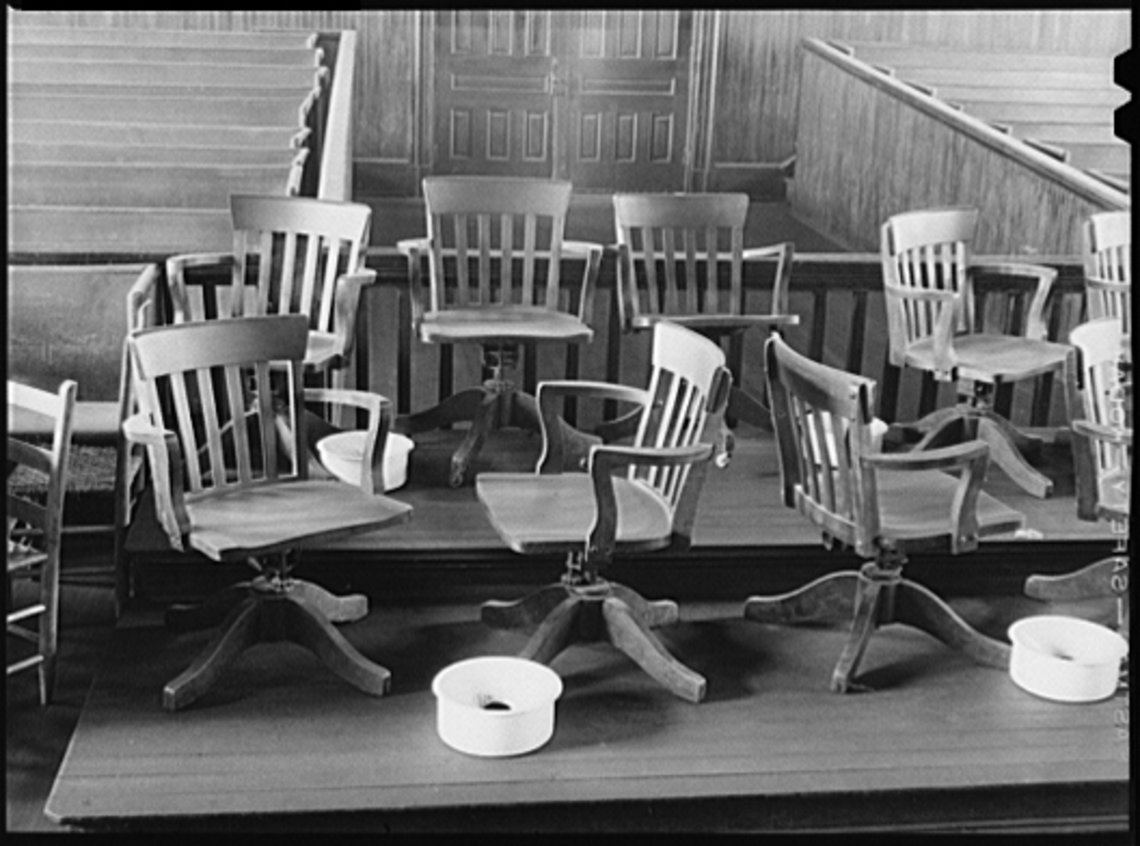 The jury area of a courtroom in Franklin, Georgia in 1941.

This broad question has often turned on the reasons that prosecutors offer for excluding black men and women from juries. Decades after the Jim Crow era of all-white juries, defense lawyers continue to argue that prosecutors — particularly in the South, where the death penalty is most popular — use more subtle methods to exclude blacks.

Clarity could come with a U.S. Supreme Court case, Foster v. Chatman, which will be argued on Monday and decided next year. Both prosecutors and defense lawyers hope the outcome will guide prosecutors to avoid accusations of bias while showing the defense what kind of evidence is necessary to prove that prosecutors really are discriminating.

In 1987, Timothy Tyrone Foster, 19, was sentenced to death for the murder of Queen Madge White, a 79-year-old white widow in Rome, Georgia, a small town near the Alabama border. White had just returned home from choir practice. Foster — who is currently on death row — was found guilty of breaking into her home, raping and strangling her, and stealing some of her possessions, including an air conditioner, several lamps, and drinking glasses.

Foster is black, and his jury was all-white, which is legal. But years later, as Foster’s lawyers examined notes made by prosecutors during jury selection, they made a discovery: names of black members of the jury pool had been highlighted in green and labeled “B#1,” “B#2,” and “B#3.” Clayton Lundy, an investigator for the prosecution, had said these men and women should be ranked, just in case “it comes down to having to pick one of the black jurors.” (Incidentally, Lundy himself is black). Foster’s lawyers are seeking a new trial.

Prosecutors and defenders have wide latitude as they take turns “striking” potential jurors from the pool — these are called peremptory strikes — but they cannot base their decisions on race, ethnicity or gender. Officially, Foster’s prosecutors did provide reasons unrelated to race for considering these jurors less than ideal for their side; one had a son incarcerated for theft, another had stated she would not vote for death “regardless of the evidence.” The Georgia Supreme Court later agreed that prosecutors fully investigated all of the prospective jurors and that these reasons were sufficiently “race-neutral.”

A year before Foster’s trial, the Supreme Court had decided that excluding potential jurors because of their race would violate the equal protection clause of the Fourteenth Amendment. The case was called Batson v. Kentucky, and calling out the other side for trying to base a decision on race is now called a “Batson challenge.”

Since then, “prosecutors have become pretty adept at paying attention to the reasons they can give that are not race-related,” says Tim Cole, the former district attorney of Montague County, Texas, (and now an opponent of the death penalty). If there is no paper trail — like the highlighting and circling in this case — it is practically impossible to prove the “subjective intent inside someone’s mind.”

Many defense attorneys and legal scholars argue that Batson v. Kentucky has proved to be a weak regulator of behavior. Yale law professor Stephen Bright, who will argue Foster’s side before the High Court, told The Marshall Project that “people of color are routinely being excluded from juries so that even in jurisdictions with substantial minority populations, cases are being tried to all-white juries.” In 2010, the Equal Justice Initiative1 found that in some Alabama counties, more than 75 percent of black jury pool members in death penalty cases had been struck by prosecutors.

Bryan Stevenson, director of the Equal Justice Initiative, is on the advisory board of The Marshall Project.

How does this happen? Bright points to training sessions for prosecutors like one that took place in Texas in 2004. The training document—“Batson Basics”—featured what Bright called “ready-to-use race neutral reasons” for excluding black jurors. These included, “Agreed with O.J. Simpson verdict,” “Long hair and a goatee,” “Chewing gum,” “Worked for a labor union” and “Smiled at or flirted with defendant.”

Shannon Edmonds, the director of governmental relations for the Texas District and County Attorneys’ Association, which sponsored the training, says these reasons are not “ready-to-use,” but rather examples of justifications that have been approved by judges in past cases. “I’m not sure how you teach about the law on a particular subject without discussing the cases interpreting that subject,“ Edmonds told me. “Failing to do so would be some pretty worthless legal training, in my opinion.” (The document, which Edmonds sent to us, provides a rich look at how prosecutors prepare for trials).

But what if prosecutors do not even know they are really striking someone based on race? Federal Judge Mark Bennett has argued that prosecutors might strike black jurors because of “implicit” bias. Whatever the prosecutor is really thinking, he writes, the “defendant’s practical burden [is] to make a liar out of the prosecutor” and “most trial court judges will only find such deceit in extreme situations.”

In a statement to the justices, a group of prosecutors sympathetic to the defense in Foster’s case wrote, “If this Court does not find purposeful discrimination on the facts of this case, then it will render Batson meaningless.” But Supreme Court cases decided after Batson already have significantly watered down its meaning. In a 1991 case styled Hernandez v. New York the justices allowed prosecutors to remove Latinos from a jury because they spoke Spanish. In another case, Purkett v. Elem, the Court’s majority declared in 1995 that a prosecutor’s reason for removing a potential juror of color need not be “a reason that makes sense” so long as that reason “does not deny equal protection.”

Christina Swarns, the litigation director at the NAACP Legal Defense Fund, says cases with overt forms of bias in jury selection are a “canary in the coalmine” for broader problems of racial discrimination. In recent years, the Supreme Court has declined to look at the cases of Duane Buck (whose Texas jury was told by an expert witness that he was more likely to commit future crimes because of his race — Swarns is his lawyer) and Kenneth Fults (whose Georgia jury had one member who later said of the death sentence, “that’s what the nigger deserved”).

Swarns sees these overt cases as exceptions only in their bluntness; usually discrimination is more subtle. “If you have to have racial epithets coming out of your mouth to prove you’re discriminating,” she says, then it’s “going to be impossible” for defense attorneys to prevail on claims of bias.

A small group of judges, including Bennett and Supreme Court Justice Stephen Breyer, have suggested that the ultimate way to fix the situation is to completely eliminate “peremptory challenges” — the ability of prosecutors and defense attorneys to cut jurors from the pool without a reason.

But David LaBahn, president of the Association of Prosecuting Attorneys, says prosecutors need a lot of discretion to vet jurors. He describes jury selection as “an art, not a science,” and says that since most states require a unanimous jury in order to impose a death sentence, a single juror can keep a death sentence from being imposed, leading “over and over” to costly retrials.

This, LaBahn said, “would not be justice.”