And why it can lead to criminal behavior.

This might seem like an obvious statement: kids who grow up in the poorest and most segregated neighborhoods are the most likely to witness violence or get arrested. After all, they are living in areas with higher crime rates, and they tend to have the least access to the supports — like quality schools and good jobs — that help them avoid trouble.

But what if that isn’t entirely true?

A new study from Corina Graif, a sociologist at Penn State University, found that low-income teenage boys living in “extremely poor” neighborhoods — those in the bottom 5 percent for income — were actually more likely to get into trouble if their neighborhoods were surrounded by more affluent ones.

Graif’s paper, published in August in the journal Criminology, used a novel strategy to study the effect of geography on kids and crime. Instead of looking only at a teenager’s own census tract, an area that contains about 4,000 residents, Graif also considered the “extended neighborhood” — one’s own census tract plus the four that surround it. In an urban area, census tracts are geographically small; New York City, for example, contains over 2,000 tracts. 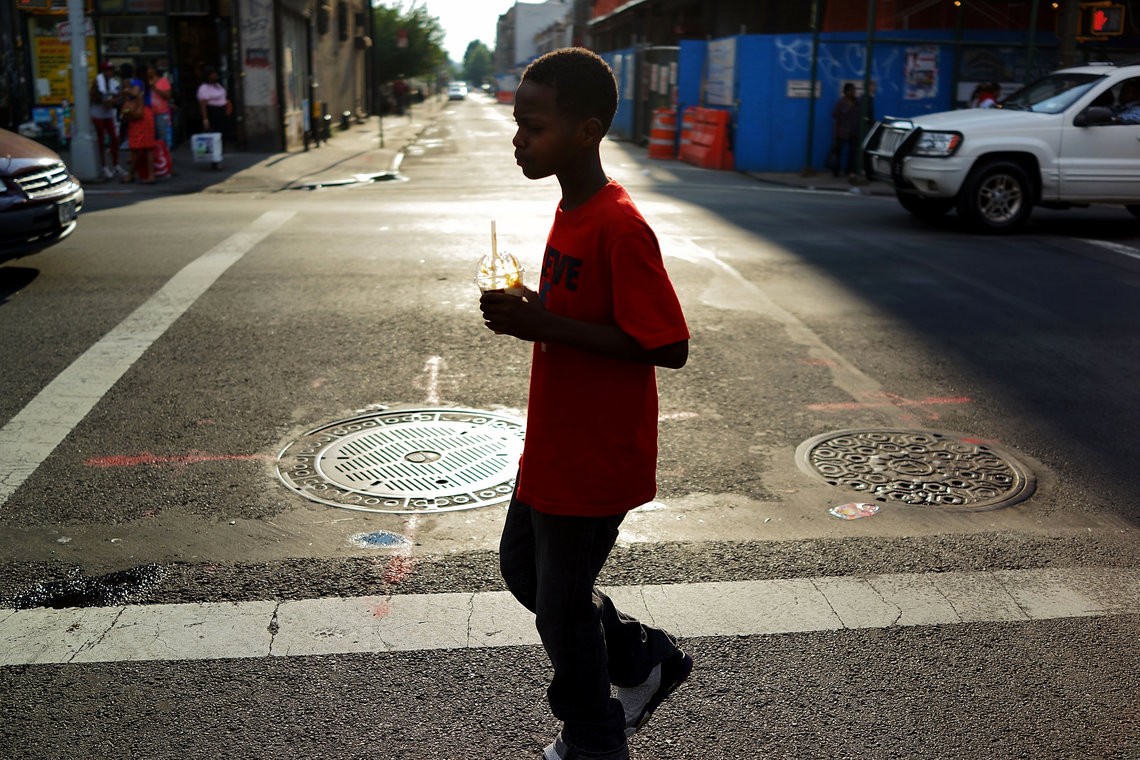 A boy walks down a Crown Heights, Brooklyn street in July 2013.

Poor girls who lived in extremely poor census tracts, but whose extended neighborhoods included predominantly middle-class tracts, had fewer delinquent friends and believed more strongly in their ability to attend college and get a good job.

The opposite was true for boys.

The poor boys in the mixed extended neighborhoods were also more likely to have witnessed gang behavior, stabbings, and shootings. Their lack of hope in the future and association with delinquent peers caused them to have more contact with police, regardless of the underlying crime rates in the neighborhoods where they lived.

The study was based on interviews with nearly 1,600 poor teenagers who lived in the Baltimore, Boston, Chicago, Los Angeles, and New York metro areas between 1994 and 2002. Sixty-three percent were black. The subjects’ families were participants in a federally financed experiment called Moving to Opportunity, which studied the impact of using housing vouchers to move poor families to middle-class neighborhoods. The initial results from Moving to Opportunity were disappointing: Poor boys who moved remained poor into adulthood and were more likely to use drugs and get arrested than those who stayed in poor neighborhoods.

But over the past year, a group of scholars began to reassess the program. Harvard economists Raj Chetty, Nathaniel Hendren, and Lawrence Katz have found that moving from poor to middle-class neighborhoods can help children earn more money as adults, but only if the move happens before the child is 13 years old. By examining extended neighborhoods, Graif’s research sheds light on why older kids struggled. “It could be that they started in a world where everybody around them was the same, and when they moved to this mixed environment, they saw all the opportunities that other kids had but they didn’t,” she said. “They felt excluded, and that created a sense of injustice.”

Graif’s study includes both the teenagers whose families used housing vouchers to move and those who stayed in poor areas but saw their extended neighborhoods gentrify around them. The pattern of poor boys suffering if their low-income neighborhoods were surrounded by richer ones held true for both groups. Feelings of class or race resentment can lead a teenager to engage in criminal activity or drug use as a way to cement social status, Graif suggested. And access to more affluent “targets” can make it more profitable and tempting for a boy to rob neighbors or sell them drugs.

Police may also more closely monitor boys of color who live near white neighbors. In a separate 2011 study published by the American Journal of Sociology, four scholars interviewed teenagers who participated in Moving to Opportunity. The boys reported that new, white neighbors were more likely than previous, black neighbors to call the police. Roger, a 16-year-old boy in Chicago, said, “I was in the suburbs. There wasn’t nothing to do at all. Police always messing with you. Talking about you doing this, you’re doing that.”

Girls in poor census tracts had a less fraught experience. Graif found that as they gained access to middle-class neighbors, girls had more friends who were engaged in school activities and felt more optimistic about the future. Parents also more closely supervised their daughters — girls spent more time at home, and parents reported in interviews that they were more likely to be aware of a daughter’s whereabouts than a son’s.

“I don’t know if it’s because parents are more worried about girls than boys,” Graif said. “With boys, some parents may allow more leeway, and if they don’t, the boys are taking leeway no matter what the parents say.”

There was a silver lining: Graif found that poor boys in mixed-income neighborhoods were able to avoid risky behavior and police contact if they also avoided delinquent peers and cultivated a hopeful attitude toward the future. Schools can play a big part in helping that happen. Although Graif’s research demonstrates that socioeconomically mixed neighborhoods hold special risks for boys, a separate body of research shows that socioeconomically mixed schools do help poor children of both sexes earn higher test scores and avoid crime. The key may be to ensure that when poor children move or their neighborhood gentrifies, they have equal access to good schools. Generally, poor kids of color remain clustered in segregated schools even when middle-class whites live nearby.

Researchshows that extracurricular activities can also help. In Chicago, the Becoming a Man program has decreased arrest rates and improved grades for low-income boys by providing them with math tutoring and sports instruction. In New York City, Save our Streets (SOS) aims to steer boys away from gangs by providing them with counseling and job training. Juan Ramos directs the SOS program in Bed-Stuy, a rapidly changing swath of central Brooklyn. He says there are special risks for low-income boys living in gentrifying neighborhoods, who may turn to gangs or crews in search of a sense of belonging.

“You see the community changing, but the social condition of a lot of the people who were there before hasn’t changed,” Ramos said. “That’s no fault of anyone moving in, it’s just a lack of community resources that haven’t been there and still are not there” for low-income kids.

The study also raises questions about where low-income housing should be located. For Graif, the lesson is that if policymakers expect neighborhoods to help poor boys succeed, they should consider not just the several blocks nearest to where a child lives, but also the larger area. “When both the immediate and the surrounding neighborhoods are improved, the surprising effects on boys' misbehaving disappears,” she said.