Kentucky’s Protracted Struggle to Get Rid of Bail

‘Is there any better way than money’?

In October 2013, Kentucky truck driver David Jones was arrested on charges of distributing child pornography. He insisted he was innocent, and a judge set his bail at $15,000 cash, far above what Jones could pay. That was soon bumped down to $2,500 cash, as long as he could secure another $22,500 with personal property.

Jones could not. His public defender, Valetta Browne, repeatedly tried to get his bail lowered to an amount he could afford. She was armed with a powerful argument: Jones’ score on a unique statewide risk assessment tool showed he was unlikely to skip court or be re-arrested. Still, four separate times Browne’s request was rejected by judges who cited the serious nature of the alleged crime.

A defense expert could find no evidence Jones had ever downloaded child pornography onto his computer. Late last year, 14 months after Jones was first jailed, a judge lowered bail to just $2,500 cash, which a relative paid. In April, the charges were dropped. By then, Jones had lost his job and his apartment and missed his son’s high school graduation.

“It takes every dime I make to survive,” Jones said. “And so, I sat there.”

Across the United States, an estimated 450,000 people are sitting in jail awaiting trial on an average day, mostly because they can’t afford bail. For decades, Kentucky has been trying to find an alternative.

But if Kentucky shows the promise of bail reform, cases like Jones reveal its limits.

“Kentucky has always been looked at as a leader in bail, and they are,” said Tim Schnacke, who has analyzed and written extensively about bail systems. “But as long as you leave money in the system, you will have huge problems.”

In 1976, Kentucky made it illegal to profit from bail, effectively getting rid of commercial bondsmen. Instead, a statewide agency began trying to determine a defendant’s flight risk and chance of being arrested again using a tool called a risk assessment—a series of questions about a defendant’s history and sometimes other social factors. Some defendants were assigned risk scores, which judges could consider when setting bail.

It was a radical approach at the time, yet jails continued to fill with defendants unable to afford bail.

The state took its reform efforts a step further in 2011. State lawmakers passed a criminal justice reform bill that directed judges to release defendants with low- and moderate-risk scores, such as Jones, without requiring that they post money. If judges required cash from a defendant, they would have to explain why. 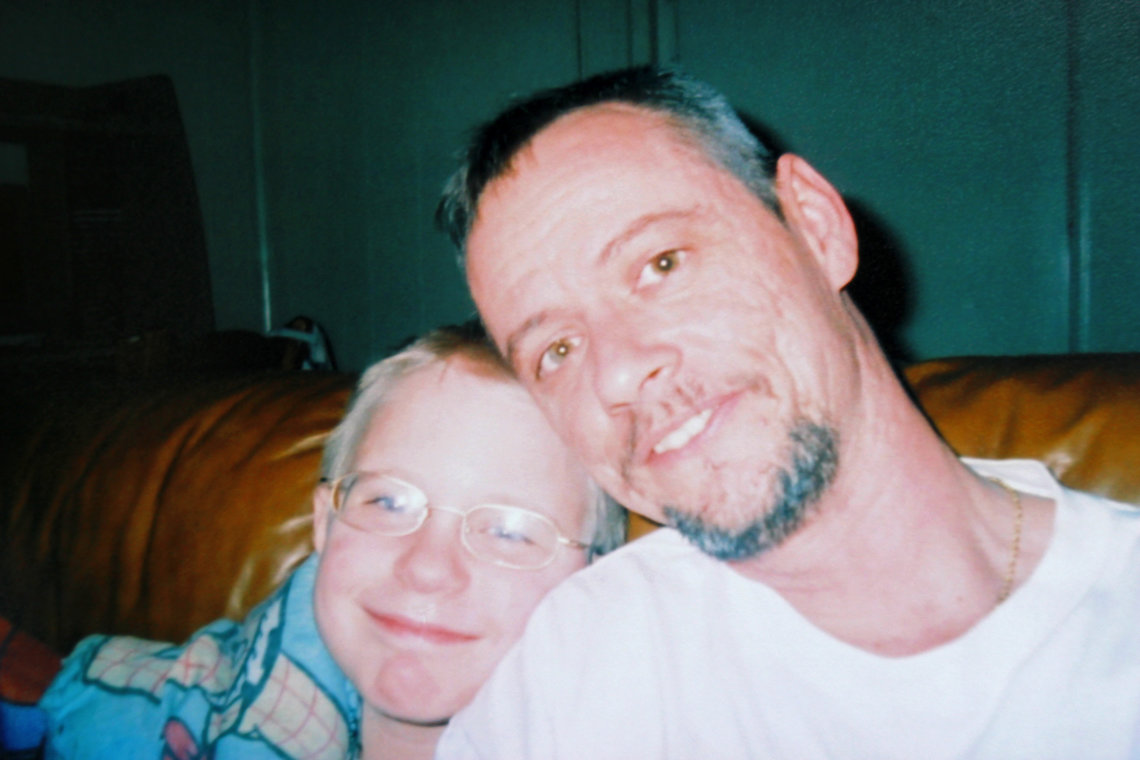 David Jones in an undated photograph with his son.

Following Kentucky’s lead, laws in 15 other states created, authorized or improved the use of risk assessment tools in the past three years. New Jersey and Arizona will soon adopt pretrial systems with elements inspired by Kentucky.

But trust in risk assessment tools varies among Kentucky judges. Although they must explain why they set bail for defendants who are rated low- or moderate-risk, some judges simply write or say “flight risk” or “danger.”

“I do think it’s a good tool. But it is nothing other than a tool,” said Fayette County Judge Julie Goodman.

Since 2013, Kentucky has used the Public Safety Assessment, a risk measuring tool developed by the Houston-based Laura and John Arnold Foundation. (The Arnold Foundation is a funder of The Marshall Project.) The algorithm is based on nationwide data from 1.5 million criminal cases and is based only on a defendant’s criminal record. The foundation plans to soon make it widely available for free.

“The tool works, we know that,” said Anne Milgram, the former Attorney General for New Jersey and the vice president of criminal justice at the Arnold Foundation. “The challenge is one of implementation. It’s a culture change.”

Judge William Clouse, who presided over most of the David Jones case, said he has grown to trust the risk assessment tool. Over the course of his career, Clouse has regretted setting bail both too high and too low.

There have been other struggles in Kentucky. Goodman, the Fayette County judge, and others said their skepticism was underscored when several people who had been charged with escaping from custody were still deemed low or moderate risk. “It was a running joke,” said Fayette County Judge Joseph Bouvier, who pointed to three such cases this year.

Fayette County’s prosecuting attorney, Ray Larson, has been one of the most outspoken critics of the approach. “What we’re seeing is people being released with absolutely no concern for crime victims,” Larson said. “These are soft-on-crime, criminal-friendly laws that are being passed by our dumb-ass legislature.”

Not long ago, Larson created bright yellow bumper stickers that said: “Catch and release is for fish not felons.”

Judge Sean Delahanty got a taste of that sentiment when he set the bail on a high-profile murder case.

After Donald Hayes fatally shot a man after a road rage incident in Louisville, Ky., last year, he called the police to turn himself in, claiming the killing was in self-defense.

The Arnold tool determined that Hayes, then 67, who had no criminal record, was a low risk for committing another crime or skipping court. Judge Delahanty set bail at $10,000 cash. Hayes posted the money and was released. The public backlash was swift.

"Let's not lose focus on the fact that a judge set a $10,000 bond on a murder case," Jefferson County’s prosecuting attorney, Mike O'Connell, told local reporters. Another judge, Eric Haner, set bail at $50,000 cash, and Hayes went back to jail. “The risk assessment can be instructive, but it can never substitute for judicial discretion,” Haner said. “This was a murder charge.” Hayes eventually posted the $50,000 and was re-released.

But Delahanty remains a staunch supporter of risk assessment. Delahanty said recently that he was “cowardly” when he set a $10,000 bail for Hayes. He now believes he should have trusted that the man was a low risk and released him without any money bail at all.

“If you have an instrument that’s proven, focus on that, rather than a possible political fallout,” Delahanty told a group of visitors examining the state’s reform efforts this summer. 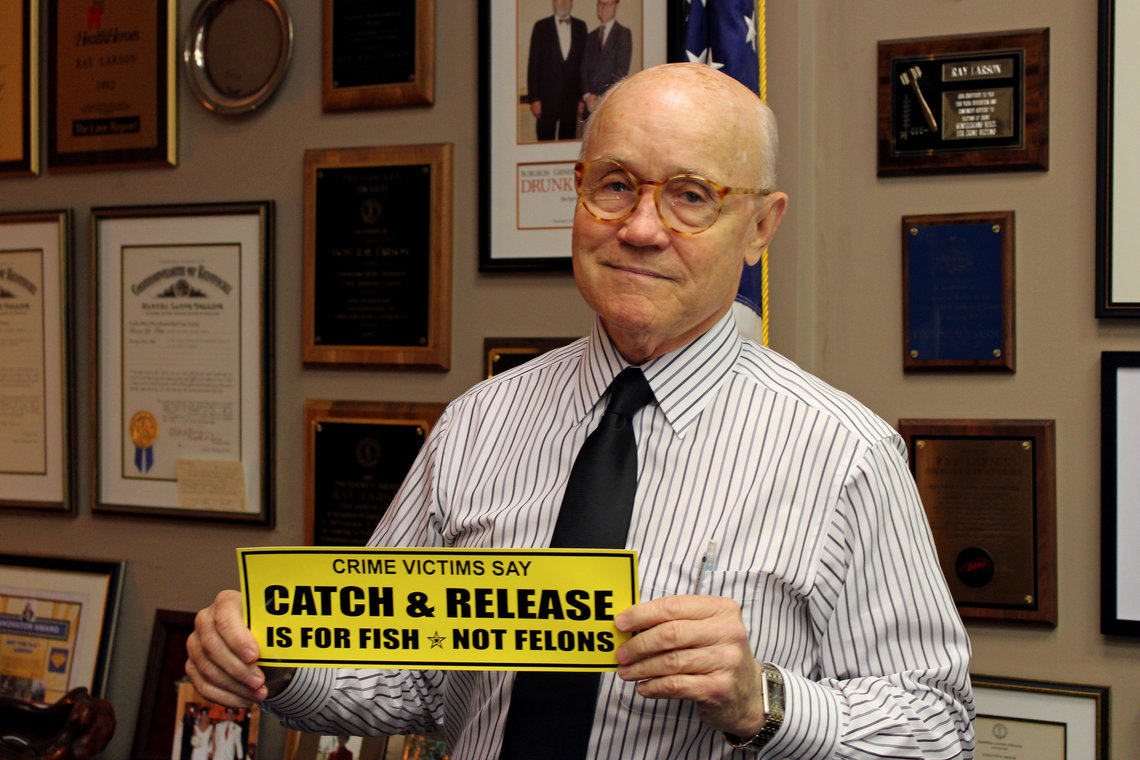 Fayette County’s prosecutor, Ray Larson, with a bumper sticker he created in response to recent penal reform laws in Kentucky.

In Washington, D.C., courts don’t use money in bail at all. The overwhelming majority of released defendants—roughly 90 percent—make all their court appearances and remain arrest-free pending trial. “We have proven to ourselves and the world that we don’t need money in bail,” said Judge Truman Morrison, a superior court judge for the District of Columbia. “You can run a successful, rough-and-tumble, big urban justice system without using bonds at all.”

Part of the success in Washington’s bail system can be attributed to broad discretion judges have in denying bail outright. Twelve to 15 percent of defendants deemed a danger or high flight risk are held without the option to post bail. That’s in sharp contrast with the laws governing judges in Kentucky and many parts of the country, often referred to as “right to bail” states, where bail cannot be denied unless the person is charged with a capital crime.

In these states, setting a high bail and hoping the defendants can’t make it is the only way to detain someone believed to pose a danger to the community.

That’s apparently what Kentucky Judge Cathy Prewitt was attempting to do in May when she set a $25,000 bail on a defendant who was repeatedly charged with violating a protective order. When Prewitt, a district judge in Whitley and McCreary Counties, heard the defendant’s mother had arrived at the clerk’s office to post the money, she raised it to $50,000. There was no notice or hearing. Prewitt later detained the mother for calling her a “bitch” in front of the court clerk; the judge was suspended for a week without pay for the incident.

Prewitt did not respond to multiple requests for comment.

Brian Scott West, general counsel for the Kentucky Department of Public Advocacy, its public defender's office, said he hopes to find a case that could persuade the state’s high court to consider whether money should be used in the bail system at all.

In 2014, the New Mexico Supreme Court ruled that setting a high, unattainable bond on purpose is unlawful and ordered a defendant’s release on nonmonetary conditions. In February, the Department of Justice, after being mostly silent on the issue of money in bail, filed a statement of interest declaring that the “principles of equal protection squarely prohibit bail schemes based solely on the ability to pay.” In June, a federal court in Missouri issued a declaratory judgment in which it wrote, “No person may… be held in custody after an arrest because the person is too poor to post a monetary bond.” In 2015, a series of lawsuits led cities in Alabama, Mississippi, and Louisiana to end the use of money bail for misdemeanors and traffic violations, and other similar cases are pending.

But Judge Goodman expressed the thoughts of many judges when the topic of removing money from the bail system was raised soon after a court session where four people failed to appear: “Is there any better way than money? What are you going to do, hold their first born? That’s what people value.”