Highlights From Our Death Penalty Discussion

Journalists Liliana Segura, Gabriel Dance and Maurice Chammah took your questions about the death penalty and criminal justice reporting. Here are some of the highlights.

The 28th and final execution of 2015 was set to be held last night in Georgia. The total represents a dramatic drop from a historic high of 98 in 1999. But despite the decline, some state officials and advocacy groups are pushing hard to save capital punishment. Those debates are expected to heat up in 2016.

Tuesday, The Intercept’s Liliana Segura and our own Gabriel Dance and Maurice Chammah took a year-end look at the state of the death penalty in a discussion on Reddit. Check out the highlights below, or read the full transcript.

Are there any popular misconceptions about capital punishment that most people wrongly believe, either through pop culture or misinformation, that you could debunk? (I understand that the question is difficult because of the wide variety in state law affecting capital punishment) — Tetris410

Gabriel Dance: I'd say one of the most hotly contested misconceptions regarding the death penalty is whether an innocent person has ever been executed. I'd guess that most people believe we have not, but there is growing evidence surrounding multiple cases that that might not be true.

The Marshall Project (in collaboration with The Washington Post) has looked extensively at the Cameron Todd Willingham case, as has David Grann for the New Yorker. There are also several other cases: Carlos DeLuna and the more recent case of Richard Glossip also spring to mind.

This is not to say that we HAVE executed an innocent person, it's just to say that a common misconception is that we definitely haven't... and I'm not sure that's the case. Neither is Supreme Court Justice John Paul Stevens for that matter.

Maurice Chammah: One that I constantly run into is that the death penalty is cheaper than life in prison. It's not. In order to ensure the courts don't sentence innocent people to death, a massive number of safeguards have been put in place — more experts, more psychological tests, better lawyers, more appeals — and those all cost vastly more money than the 40-50k it costs to keep someone in prison per year for the rest of their life.

Are there any cases currently under appeal that you think are particularly illustrative of the issues that make the death penalty so troublesome? – DhabNuhr

Chammah: A death penalty defense lawyer would probably say every single case out there is illustrative. I think an interesting case that hasn't been in the news as much lately is that of Duane Buck, in Texas, who was found by the jury to be a "continuing threat to society," in part because a psychologist testified that dangerousness correlated to race (Buck is black). He's represented by the NAACP Legal Defense Fund, who sees his case as evidence of a much wider racial inequality that pervades capital punishment. Here's a story I wrote a few years ago about the case. 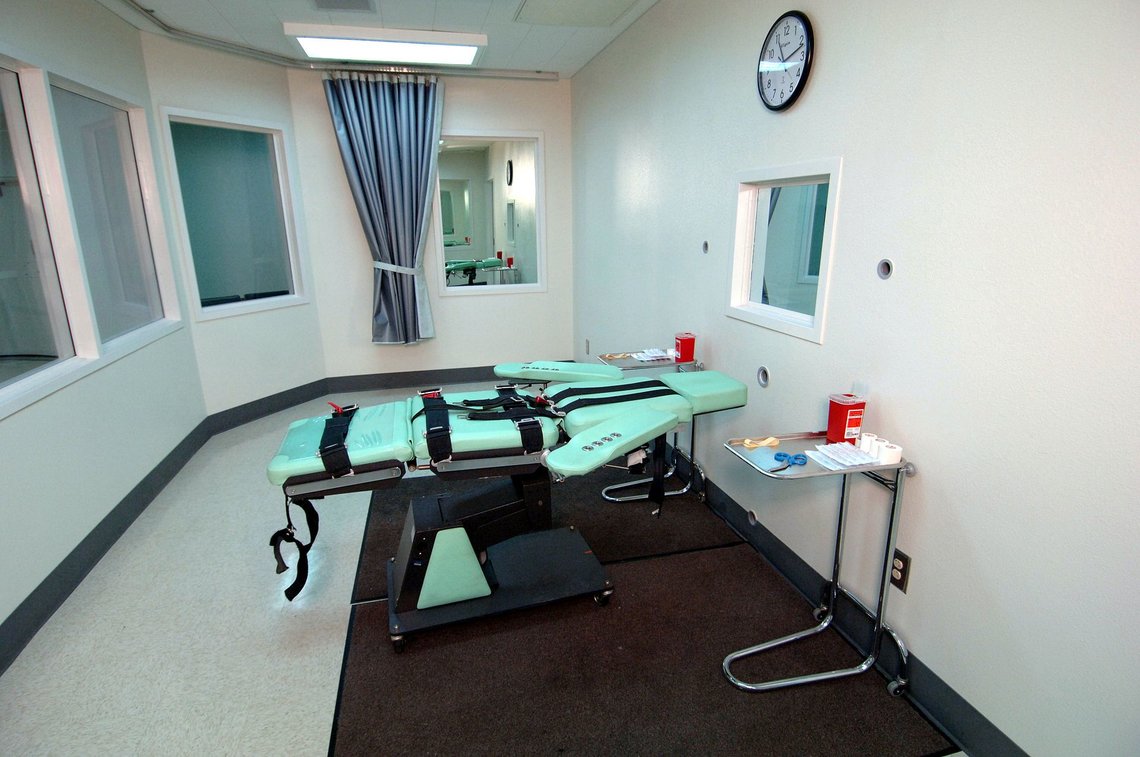 The still to be used lethal injection room at San Quentin State Prison, California. Opened in 2010 at the cost of $853,000.

Liliana Segura: I covered the case of Richard Glossip in Oklahoma earlier this year. This is a man who is likely innocent and has faced execution multiple times, most recently in September 2015.

What's remarkable is that many of us did not know the particulars of just how weak his conviction was until his name was already nationally known for a problem totally separate from innocence: lethal injection. Glossip was the named plaintiff in Glossip v Gross, which the Supreme Court heard in January and which centered around a new drug states have been playing with, midazolam, in an attempt to tweak and preserve their embattled execution protocols. Glossip faced execution with this new drug, but successfully convinced the Court to hear his challenge. But at the end of the day, he lost: SCOTUS upheld Oklahoma's use of midazolam and the state swiftly moved to execute Glossip.

In the meantime, however, my colleague, Jordan Smith, and I started digging into his case. The more we did, the more disturbed we were by it. Glossip was sent to death row almost entirely based on the word of a confessed killer, the man who actually carried out the crime in his case. This man, Justin Sneed, cut a deal with the state to save himself from the death penalty, by claiming that Glossip (his old supervisor at a crappy motel), ordered/coerced him to commit murder their boss for him. (He is now serving life.) But no physical evidence connected Glossip to the crime, the motive made no sense, etc. Yet he was tried and convicted twice, both times very poorly represented, and condemned to die. As more troubling proof came out about Glossip's case last summer and fall, the state dug in its heels more and more to try to push through the execution.

Long story short, he came within moments of being killed in September, only for the state of OK to abruptly halt his execution, because it had the wrong drug on hand. Denials, spin, and firings have followed at the OK DOC. It's not a state that should be trusted to carry out executions (if you assume that any state should be, which I do not.). You can read the full investigation at The Intercept.

The creators of The Marshall Project talk about the current lack of in-depth reporting on the American criminal justice system as one of the motivations for its founding. What do you think are some of the reasons criminal justice seems to be underreported? Are racial and economic disparities factors? — annaflagg

Dance: I think a key distinction is 'crime reporting' vs 'criminal justice reporting.'

At The Marshall Project we feel that the criminal justice system itself is not robustly covered. The death penalty, bail, prison rape, juvenile justice, solitary, reentry... the list of topics within the system is long and complicated. And for a system that plays such a fundamental role in the United States (2 million+ in jails and prisons, billions of dollars involved, a disproportionate amount of minorities incarcerated) there has been a surprising disregard for examining (or reexamining in some cases) the processes that have ended up putting our country atop a pedestal many regard as problematic: the highest per-capita incarcerator in the world (save for the Seychelles, a very small nation).

The US media does a fine job covering crime.

In the grand scheme of human society, say 5,000-10,000 years from now, do you believe that the death penalty will be abolished in the same way that, say, harvesting Pharaoh organs is out of fashion, or do you think that it is a core, sort of embedded human understanding of justice that societies will always be wrestling with? – sbaderdeen

Dance: The moral dilemma posed by the death penalty – should we take somebody's life based on something they've done – is a deeply personal question. It's also clearly one that has resonated for generations past, in different societies around the world. I have no reason to think it won't continue to resonate.

Part of why we built The Next to Die is to have people confront the humanity of the issue. As an impartial news organization, we don't take a stance on the morality of the punishment, but we did feel that the issue was not receiving enough attention at the point when it most needs it: before an execution is carried out. In the last few months alone there have been several executions carried out wherein the person executed did not actually commit the murder (gissendaner), the guilt of the person was in doubt (several have argued this), or the state was deemed unprepared to execute the people in a way that was sure to be legal under the 8th amendment (glossip).

I think the conversation is slowly shifting from a moralistic one ("should we execute?") to a more pragmatic one ("can we execute people non-arbitrarily and humanely?"). I think the second question will be interesting to see develop into a more robust conversation.

How do you see race or racial disparities between white and black death penalty convictions contributing to the legal discourse revolving around the death penalty? Are these topics gaining popularity (for lack of a better word) in light of growing public scrutiny of law enforcement and its suggested mistreatment of minorities? – throwaway_shhmowaway

Segura: The death penalty system tolerates (and thrives upon) incredible levels of racism in this country. Race has everything to do with it. But part of the problem, if you're talking about legal discussions, is that the Supreme Court has insulated the death penalty from challenges based on race. McCleskey v. Kemp is hugely responsible for this problem, as it set an incredibly high bar to getting cases overturned on a race discrimination basis.

So as far as legal avenues, they are limited. Still, people like Bryan Stevenson have been critical voices of conscience about the way our racist roots decide who lives and who dies--he does not avoid race discussions but puts them at the center of what he does. And that connects really well with this moment, I think, in which Black Lives Matter and others have done so much to reinvigorate the racial justice fight against injustices.

1. Is there any kind of consensus among legal scholars on what is considered cruel and unusual?

2. What are things that people can do to help abolish the death penalty?

4. Will there be any major events in 2016 that involve abolition of the death penalty?

5. Why do they not do the executions in public?

1. No. The definition of cruel and unusual has been debated consistently since the constitution was written. There are originalists who look at what was considered "cruel and unusual" at the time of writing (the death penalty wasn't). Others use the phrase "evolving standards of decency" to argue the definition should change over time.

2. Sign petitions, join organizations that are expressly for abolition. It often depends what the situation is in your state.

3. I don't know of any, but some major activist organizations at the forefront of the issue are the Equal Justice Initiative, Southern Center for Human Rights, and Reprieve.

4. There is some chance the supreme court might take up the question of whether the death penalty should be abolished. In November, there will be public votes in both Nebraska and California over whether those states should maintain the death penalty.

5. That's a great question. Many have argued they should ([see here](http://www.nytimes.com/2011/07/31/opinion/sunday/executions-should-be-televised.html?_r=0)). They went behind closed doors around the 1920s, after big public lynchings, particularly in the south, were embarrassing to southern political leaders.

Segura: There is so much to say on all of this. I would add to #5 though that there is a disturbing direction away from transparency in the past few years, as states have tried to keep their lethal injection protocols a secret. States have passed laws to keep the source of execution drugs secret, as well as the identities of those who carry out the process. It's a huge problem for ensuring that executions are carried out with any kind of caution. But the high profile botched executions make clear how inept and cruel the whole thing is, for all the efforts to sanitize it.