My Life in the Supermax

Finger handshakes, the toilet phone, and the “shoe bomber.”

By Eli Hager
Perspectives from those who work and live in the criminal justice system. Sign up to receive "Life Inside" emailed to you every week.

Not many people ever make it out of the ADX.

Officially called the United States Penitentiary Administrative Maximum Facility in Florence — and colloquially known as the “Alcatraz of the Rockies” — the ADX is the highest-security federal prison in the country, located in the Colorado mountains. It houses some of the more notorious inmates in recent American history, from Boston Marathon bomber Dzhokhar Tsarnaev to September 11 conspirator Zacarias Moussaoui to Oklahoma City bomber Terry Nichols to Robert Hanssen, the FBI agent who became a Soviet spy. Inmates at the ADX are held in solitary confinement for 23 hours a day, and because of their crimes, many are never released.

But Travis Dusenbury, a 46-year-old from Lexington, N.C. who was locked up at the ADX for ten years, made it out. And he has much to say about the prison and the famous people he says he met there, including the “Unabomber” and the “shoe bomber.”

Dusenbury, a self-described “righteous black power type,” first went to prison at the age of 16 for aggravated assault. He has been in and out ever since, for everything from inciting riots to gun charges. In 2005, he was doing time in a federal prison in Florida when he assaulted a prison guard who, he said, had been bullying black and Latino inmates. That got him sent to the ADX as a behavioral risk, where he remained until January of last year.

Dusenbury spoke with us about what life is like inside the most isolated, rarely glimpsed prison in the United States.

What was your first impression of ADX Florence when you arrived there?

It wasn’t like any of the prisons I’d been to, and I’ve been to a lot of prisons. I’ve been locked up in some isolated, rural places, but at least at those places I could always see a highway, see the sky. 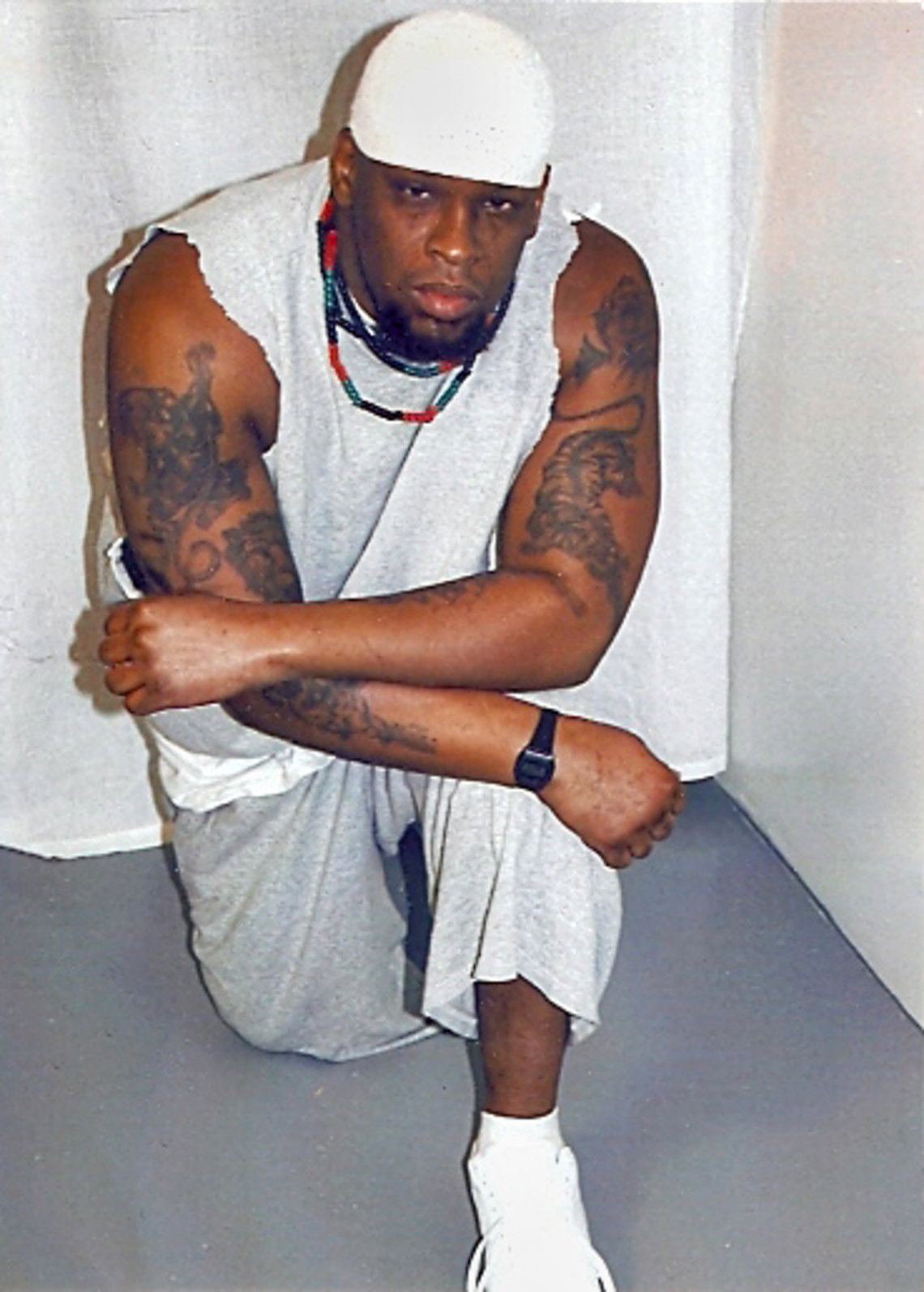 Travis Dusenbury in an undated photo taken at ADX.

But at the ADX, you can’t see nothing, not a highway out in the distance, not the sky. You know the minute you get there you won’t see any of that, not for years and years.

You’re just shut off the world. You feel it. It sinks in, this dread feeling.

What did the place look like — the cell you lived in, the bed you slept on?

It’s just the harshest place you’ve ever seen. Nothing living, not so much as a blade of grass anywhere.

My cell was all concrete. Every single thing, made out of concrete. The walls, floor, the desk, the sink, even the bed — a slab of concrete. Then you get a little fortified [recreation cage] that’s outside that you get to go walk around in for an hour a day.

It ain’t no lollygagging solitary confinement like you have at some other prisons — it’s 22, 23 hours in this concrete room, then one [to two] hours in this fenced-in area, and two days a week there was no rec though, and sometimes they just canceled it for no reason.

Did you ever run into any of the well-known terrorists and other criminals who are at the ADX?

Well, I never got sent to the control unit, where they keep the “worst” of them.

But I did meet Ted Kaczynski, the “Unabomber,” on the range [i.e. he was on the same cell block]. He was just a fucking weird little guy — he wouldn’t even go outside when he was allowed to. I didn’t like him because I knew about his crime and that crime was a weird thing to do, but I guess I respected him because he was older. So I called him “Mr.” and I think he really liked that. He ended up giving me an IQ test, because to him, intelligence was everything.

I also got to know Eric Rudolph [the Atlanta Olympics bomber]. I appreciated him because he could have easily gotten cozy with the Aryan Brotherhood, but he didn’t, he talked to me, talked to everybody, never said ‘nigger.’ When a black dude was banging all night in the cell next to us, he took it peacefully. He was a gentleman, and that’s one thing we can all get with at the ADX.

And I ran across guys like the “shoe bomber,” Richard Reid, all them with terrorism charges. I’m glad Richard wasn’t successful at blowing up the plane. That would have been fucked up. But I got along with them fine enough and learned about how they practiced Islam.

Wait, how did you communicate with those guys?

Sometimes, also, you could take a whole toilet paper roll, put it over the drain in your sink or shower, and blow as hard as you could. That would blow the water down the pipes just far enough that the pipes were empty between you and your neighbor’s cell. Then you keep holding the toilet paper roll over the drain, you talk into it, and your neighbor can hear what you’re saying clearly. It depended on the cell you were in, if the pipes were lined up and all that, but you could usually contact your neighbor this way or even one more inmate down the line.

What did you do with your days?

Wasn’t much you could do — pushups, reading. You could also write, but the only pens you could get were expensive and then when you got them, they were these little floppy rubber ink pens, the length of a crayon — so that it can’t be made into a [weapon]. But you couldn’t write with those floppy things at all.

You could listen to the radio too, but they didn’t have no rap station!

The one thing I would have liked to be able to do was sleep. But I had this monstrous insomnia. I just couldn’t sleep. I’d lie there all night, for ten years, not being able to sleep, and by the end I had this sleep deprivation that was absolutely monstrous. The cell just became my world and I couldn’t get out of it, not even into sleep.

It’s so claustrophobic in there. I know claustrophobia is a condition, but I think that place was claustrophobic. It got to the point where absolutely anything that changed, like if I saw snow falling outside, was what allowed me to survive.

Did they offer you any treatment, any psychological help?

I mean, at first, they would try to catch me sleeping, because they didn’t believe me that I was an insomniac — they thought I just wanted the meds. That went on for years.

Then they gave me the meds, but they didn’t care if it was the right meds. They didn’t care if the meds were working. They just cared that they were giving it to me, and there was no checking on me to see if I could sleep, which I still couldn’t.

And did you ever have a chance to get out of solitary?

After five years, I made it into the Step Down program — which was next to where they had a larger yard, so you could see the sky. You were with two to seven people at a time, instead of just yourself.

I’m a people person, and before long, I was hugging other inmates, and the guards were all saying, “Damn, usually motherfuckers don’t want to go near other motherfuckers after they’ve been inside.”

But at one point I got into an argument with a former comrade of mine (it boiled down to he was jealous that I was going to get out in four years and I had family waiting for me). But the guards moved us apart, and not long after that they deemed me unfit for the program, saying that I had “failed to adjust.” So they sent me back to solitary after only six months in the program.

What about the staff? What kinds of interactions did you have with the guards?

They couldn’t stand me personally because I was a righteous O.G. type of cat, a righteous black power type of cat, always causing disruptions — and I wasn’t in any type of gang or nothing (the Aryan Brotherhood, the Mexican Mafia) to back me up.

On the whole they just viewed you as less than human, there was this contemptuous look all the time. And they experimented with you by putting you next to people they knew you had violent histories with.

I think most people take it for granted that they are human, but when you get to the ADX, you realize that being human isn’t a birthright.

How did the guards punish you when you broke a rule or acted out, the way you’ve done at other prisons?

It only happened to me three times at the ADX, and I think they did it a lot more to some other guys. But what they would do is they would send this unit that we called the Goon Squad. They’d come in with the tear gas, nightsticks, steel boots, riot gear.

When I was real angry though, I’d get in at least of few punches before my lights went out. They felt it. They knew I was there.

And then you finally got out.

Yes. On January 13 of last year, they shipped me to a medical hospital in Springfield, Missouri; then they flew me to a prison in Oklahoma; then they sent me to Terre Haute, Indiana.

By May 13, I was going home to North Carolina. I’m staying with my mom now, and I’m on the right meds and I’m finally sleeping.

And you know I heard they finally have a rap station at the ADX. That’s my legacy.