Getting a Hustle: How to Live Like a King Behind Bars

From moonshine to tattoos to balloons of drugs.

By Patrick Larmour
Perspectives from those who work and live in the criminal justice system. Sign up to receive "Life Inside" emailed to you every week.

Cash rules everything — even inside prison.

Many of America’s inmates do not have family who can send them money to buy items off the prison commissary, like coffee, food, and toiletries. So they find other ways of earning cash. It’s called getting a hustle.

At my current home, the High Desert State Prison in California, tattoos are always in demand. If you can fashion a tattoo gun from a CD player motor, a pen barrel, a few wires, and a sharpened guitar string — and can draw a reasonably straight line on a fellow inmate’s skin — then you’ll never want for anything in prison. Some guys even tattoo inmates’ plastic cups, engraving names or sports logos for a few dollars’ worth of food or hygiene items.

If you have a girlfriend who will smuggle you a few balloons of drugs every week, then you’ll live like a king. Heroin, marijuana, and meth are worth their weight in gold. But be warned: This is a more treacherous hustle, one that can get you killed or your family brought up on smuggling charges.

The next best thing, money-wise, tends to be pharmaceutical medications. These are easily accessible — assuming you’re a good enough actor to convince the prison doctor you need pain meds. Some psychiatric drugs can get you high, too, so guys will act as crazy as they can to obtain the desired pills, and then hide the meds under their tongues in order to sell them later.

Meds can make for a lucrative hustle, but it’s tough work keeping up the ruse of being crippled or crazy.

Brewing alcohol is another popular hustle. It’s easy enough to smuggle apples out of the chow hall, smash them up in a trash bag, mix in a little sugar, and let it ferment for three or five days. Your homemade alcohol, “Pruno,” will taste like urine and leave you with a killer hangover, but it will get the job done. And good pruno can go for $20 a gallon.

Pruno can also be boiled and distilled in a hot pot to make a cheap form of whiskey affectionately called “White Lightning.” Highly potent and bitingly sour, White Lightning can go for $25 a cup, depending on the quality. 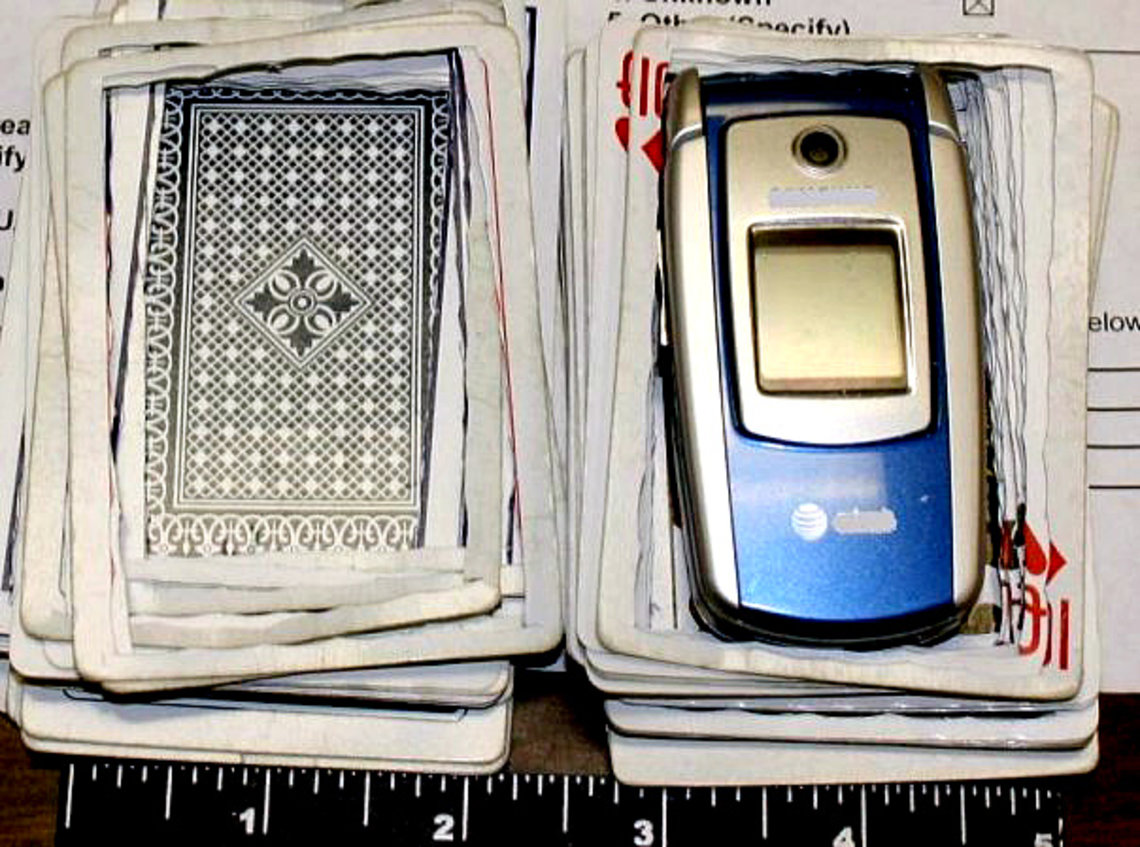 A cell phone discovered in an inmate’s deck of cards.

And since the ban of cigarettes in California prisons in 2005 (similar bans exist in other states), tobacco has become big business — huge business. As of November 2015, a single pack of Newports was going for a hundred dollars in my prison.

Many guards inadvertently support this hustle by chewing while on the job. The tobacco they spit on the yard is so highly prized that inmates will hurry over and scoop it up as soon as the guard walks away. The tobacco is then dried out, rolled in bible paper, and smoked like a cigarette.

The inmates who collect chew this way are known as “Vultures,” and usually carry a toothbrush and a playing card in their pocket to help them sweep up the tobacco refuse. They take their hustle so seriously that I’ve witnessed them get into fights over trash cans or other areas on the yard where guards most often spit. And for good reason: each lump of chew on the ground can net ten bucks for the vulture who finds it.

But the realest moneymakers are cell phones. The cheapest phone out there will go for a thousand dollars in here. Because of the markup, it’s easy to understand the temptation for guards and other prison employees to smuggle phones inside in exchange for money.

The ability to talk to friends and family on an unmonitored phone, send pictures, or get on the Internet is a rare luxury for inmates. But many prisons are cracking down on cell phones with frequency-interference devices, rendering this particular hustle an endangered one.

Extortion is another widespread hustle — assuming you’re big and scary enough to pull it off. Most often, child molesters and other sex offenders are the targets, because they’re too vulnerable to fight back. Usually, the extortion takes the form of a monthly “tax” that buys them protection.

Just like in the outside world, sex sells. Gay inmates often prostitute themselves, selling their bodies in exchange for money or commissary items. There’s a saying in prison that as long as you’re getting paid to do it, it’s “not gay; it’s a hustle.” But it’s painful to watch prisoners go this route for a few extra servings of ramen soup or coffee.

The surprising thing is, the majority of hustles in prison are positive. I’ve seen my fellow inmates carve bars of soap into beautiful sculptures or draw portraits and then sell them to their neighbors. Others wash and iron clothes, sew, repair electronics, mend damaged shoes, run sports pools, do legal work, operate stores, and even fashion TV antennas from paper clips. Some polish stones they find on the yard and make them into necklaces or furniture; some draw birthday cards; and some sell homemade burritos and candy.

It’s that creativity and determination I see in my fellow inmates that amazes me more than their desire for money. My only hope is that they can take it home with them. After all, if they can hustle in a place as harsh and stifling as prison, they should thrive when they’re back on the street.

Patrick Larmour is a 30-year-old inmate at High Desert State Prison in Susanville, Calif., where he is serving life in prison for a murder (and an unrelated rape) he committed as a juvenile.