Why Some Prisons are Spending Millions on a Pricey New Drug

Corrections facilities are ground zero for treating hepatitis C — but at a cost.

An estimated 3.5 million people in the U.S. are infected with hepatitis C, and a third of them pass through prisons and jails every year. For doctors and public health experts, this is an opportunity: wiping out the virus in prison can lower infection rates nationwide. Prisons see sticker shock: Drugs cost as much as $1,000 a day, with a course of treatment running upwards of $80,000, not including lab work or other costs.

Faced with that budget choice, most jails and prisons have done little. But the federal government and a handful of states recently have quietly changed their approach — at a substantial price.

In New York, state prison spending on hepatitis C drugs increased more than 350% in the last two years alone, from $9.4 million in 2014 to a projected $44 million in 2016. Similar increases can be seen in California and the federal Bureau of Prisons, two large prison systems now treating hepatitis C on a large scale.

“Testing and treatment will lead to better public health outcomes, saving taxpayer dollars in the long-term,” Morris Peters, a spokesman for the state’s budget division. Gov. Andrew Cuomo directed the corrections department to prioritize the treatment of hepatitis C, he said. The virus, most commonly spread through intravenous drug use, can exhibit no symptoms for years. But left untreated, it can cause cirrhosis, end-stage liver disease and liver cancer.

A new generation of treatments called direct-acting agents, or DAAs, can cure hepatitis C more than 95% of the time in 12 to 24 weeks, with minimal side effects. Research suggests that even with the steep price tag, aggressive testing and treatment in prisons is cost-effective; one study found that cure rates among patients in prison were higher than among similar populations on the outside.

But the high cost of the drugs are a significant hurdle for jails and prisons, especially when many patients are asymptomatic. 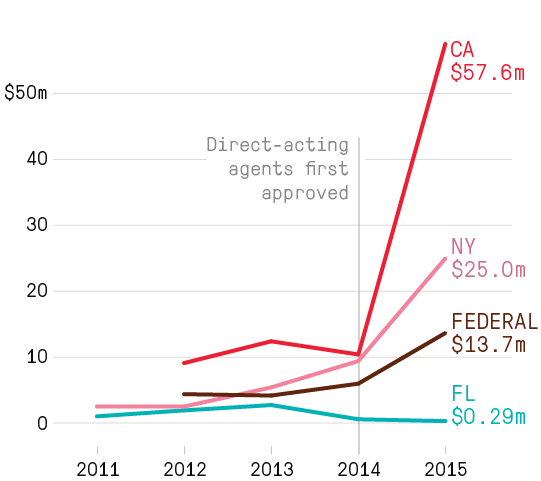 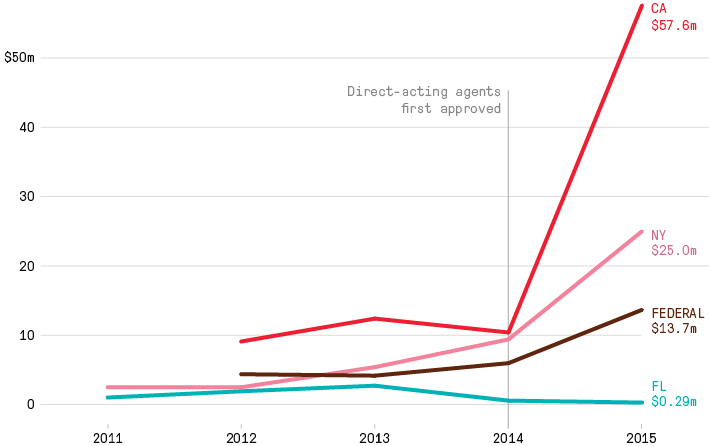 Connecticut’s prison system treats about 20 people a year with DAAs, each selected by a panel of doctors. “My total budget is about $89 million to deliver healthcare for 16,200 people. That’s mental health, dental, medical, consults, surgeries,” says Johnny Wu, medical director of the state’s prison health care system. “To have a couple of million dollars tied up for hep C is a big portion of my budget.”

Gilead inaugurated the newest generation of DAAs in December 2013 by pricing its breakthrough drug Sovaldi at $1,000 per pill. Without the negotiating power of an insurance company, prisons are generally forced to pay sticker price.

“That is a very hard sell for administrators who are living in their own bucket and not looking at the whole picture. This has to be governor-driven,” said Harish Moorjani, an infectious disease doctor who treats hepatitis C in New York state prisons.

New York has treated more than 600 inmates with DAAs. By contrast, few other states are treating more than a few dozen inmates a year — “and those are states known as ‘progressive’ on the issue,” said a public health expert who studies the issue closely. “I’ve heard states talk about treating single digits, or no one,” he said.

Florida, with the nation’s third-largest prison population, treated five patients with DAAs last year, officials said. Texas, with the country’s largest prison population, has treated 43 people with DAAs to date but plans to ramp up its program to treat approximately 400 people a year, said Owen Murray, vice president of the University of Texas correctional managed care organization, which provides medical care to most of that state’s prisoners.

A possible reason behind the shift are the threat of lawsuits. Corrections departments in Massachusetts, Minnesota, and Pennsylvania have all been sued by inmates demanding treatment.

Advocates for widespread treatment in prison gained additional fodder last year when the AASLD, the nation’s major society of liver disease doctors, updated its hepatitis C treatment guidelines to recommend treatment for virtually everyone with hepatitis C. Still, recognizing the fiscal reality, the AASLD suggests that when money is tight, doctors prioritize treatment for those with the most advanced liver disease. New York, California, and the federal system essentially adhere to those guidelines. More than 200 federal prisoners were treated with DAAs last year. California, where the prison health care system is under federal receivership, has treated upwards of 900 patients. New DAAs are entering the market all the time. The newest, Zepatier, was approved last month. Merck, its manufacturer, priced the drug at $54,600, almost half that of its competitors, and corrections officials hope competition will bring prices down further.

Moorjani is optimistic that other states will follow New York’s lead. “Now the guidelines say treat everybody. The costs have come down. There’s more competition down the road. Drugs are becoming safer and easier to give. People are asking for it,” he said. “I’m absolutely certain the policy will change.”