The War on Drugs Isn't Even Working in Prison

By Kenneth E. Hartman
Perspectives from those who work and live in the criminal justice system. Sign up to receive "Life Inside" emailed to you every week.

Twice a week, a line of prisoners forms outside the communal bathroom in the education building here at the California State Prison in Los Angeles County. One latex-gloved guard sits at a small desk outside the toilet area, checking identification cards against a computer printout. After confirming you’re on the list, he takes a small piece of cloth, rubs it on one of your hands, and then slips it into a small baggie with your name on it.

Another gloved guard looms, holding a small, clear, plastic bottle. “Try and fill it up to this line,” he tells you as he hands you a pair of blue latex gloves and watches you put them on before giving you the sample bottle.

After more than 35 continuous years of prison and at least a hundred urinalysis tests, I don’t have any trouble going while someone watches. It’s uncomfortable, and holding yourself with gloves on feels particularly unnatural, but I do what I have to and move on.

For many of my peers, however, the whole process is a grueling battle between modesty, cultural prohibitions, general resentment, and punitive possibilities. In every group of 20 or 30 men, there are at least a couple who either can’t or won’t fill it up to the line in the requisite amount of time. The consequences for failing to provide a sample are severe — things like loss of visiting privileges and outside yard time, to start — and the consequences get progressively worse for each “refusal.”

This is the War on Drugs as practiced in the California Department of Corrections and Rehabilitation, which has doubled down its efforts to identify users and punish them into sobriety. 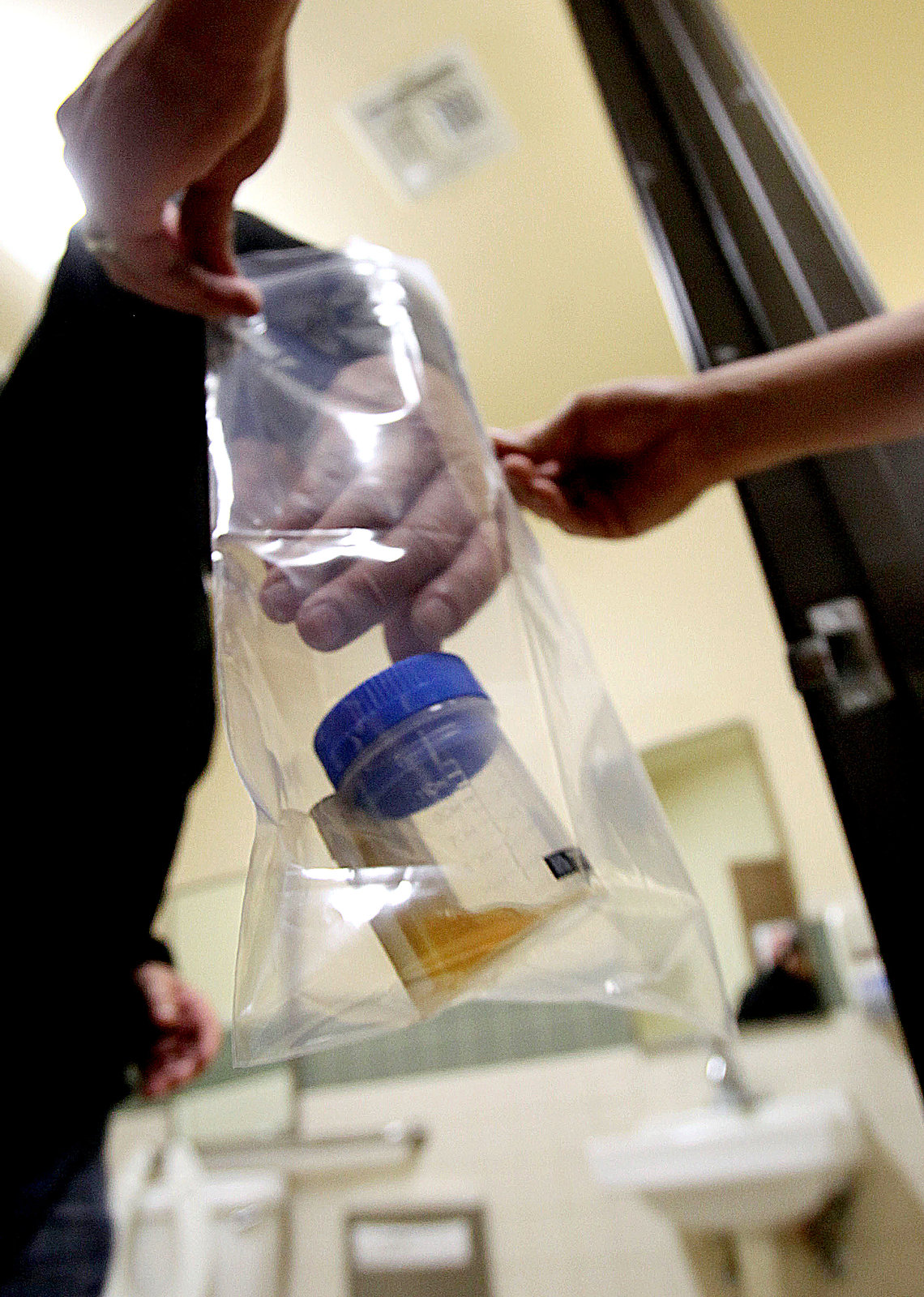 In this photo taken May 19, 2011, parolee Larry Winters, places a urine sample he has just given for drug testing, to William Chao, a parole services associate, at the parole office Sacramento, Calif., Thursday, May 19, 2011. Winters, 65, is among a group of parolees participating in the Project HOPE program that California prison officials hope will reduce the rate of parolees returning to prison. Under Project HOPE, parolees must subject themselves to frequent supervised drug testing. If drugs are detected, they will be locked up in county jail for a few days instead of returning to prison for about four months. (AP Photo/Rich Pedroncelli)

Random, widespread urinalysis is but one facet of the strategy. Guards in black shirts wander around the prison accompanied by dogs decked out in little camo-green collars with the world “police” emblazoned on top and a mock badge dangling at the bottom. You see lines of prisoners posted up against a wall while a dog moves from one to the next, sniffing away.

The most controversial devices are the ion scanners now being used at several test sites out of the Golden State’s vast empire of 34 prisons.

A random selection of outside visitors must allow a guard to take one of those same small pieces of cloth and rub it on their hands. The cloth is then placed inside a machine that scans for traces (in parts per billion) of prohibited substances. If the machine detects anything untoward, a second scan is conducted.

A second positive scan sets off a series of steps that can culminate in a body search. Visitors can refuse the search, but that could result in them being barred from coming back1.

As of January 2016, visitor strip searches are no longer allowed at California State Prisons.

The trouble with the ion scanners is that they are simultaneously unreliable and too sensitive. Visitors report testing positive for one substance, washing their hands, and then testing positive for a completely different and unrelated substance — neither of which they’ve consciously handled.

In California, another problem is medical marijuana. While state law allows the prescribed use of substances that contain THC, the prison system considers any positive finding on their ion scanners as grounds for either a body search or the loss of contact visits if those visitors don’t have appropriate documentation from a doctor.

Of the numerous problems associated with the urinalysis program, one of the least appreciated is the astonishing number of foods, prescription and over-the-counter medications, and simple but unpredictable combinations of otherwise legal substances that can register as a false positive on a drug screen.

Diabetics sometimes test positive for alcohol because their urine ferments if it isn’t stored properly.

Pain medications, antihistamines, and even antacid pills can register as everything from heroin to cocaine.

After a lifetime of prison chow, I developed a rough case of acid-reflux. I was prescribed a drug called Ranitidine, the generic version of Zantac. But I did some research and learned Ranitidine can result in false positives for meth.

Now I’m back to suffering with an easily preventable disease.

Kenneth Hartman is a 55-year-old inmate at the California State Prison in Los Angeles County, Calif., where he is serving life without parole for a murder he committed when he was 19.