For Some Prisoners, Finishing Their Sentences Doesn’t Mean They Get Out

The special problem of being a sex offender.

After serving a year and two months for a probation violation, Landreaux Yantz should have been able to walk out of a New York state prison on June 26, 2015. But officials would not let him leave.

“When I laid in my bed every night I was thinking, ‘I’m free. Why the hell am I still here?’”

Yantz had nowhere to go. In 2011, he was convicted of rape in the third degree for having sex at age 26 with a 14-year-old and was sentenced to six months in jail. His sex offender status now meant he could not live within 1,000 feet of a school — which, in his home of New York City, ruled out almost everywhere.

Yantz was moved to a different prison with fewer restrictions. He would get out only when a bed freed up in one of the few halfway houses or homeless shelters that were eligible to take him.

Unlike anyone else convicted of a crime, some sex offenders across the country are being forced to stay in prison even after serving their time. In Utah, it is because there are too few spots in a treatment program required for parole. In Illinois, it is because of strict parole requirements (no computers, no smartphones, no children at any time) and residency restrictions that few families can accommodate. In Kentucky, it is because nursing homes and assisted living facilities won’t take them. And in New York, it is because the 1,000-foot school zones encompass almost entire urban centers such as New York City. 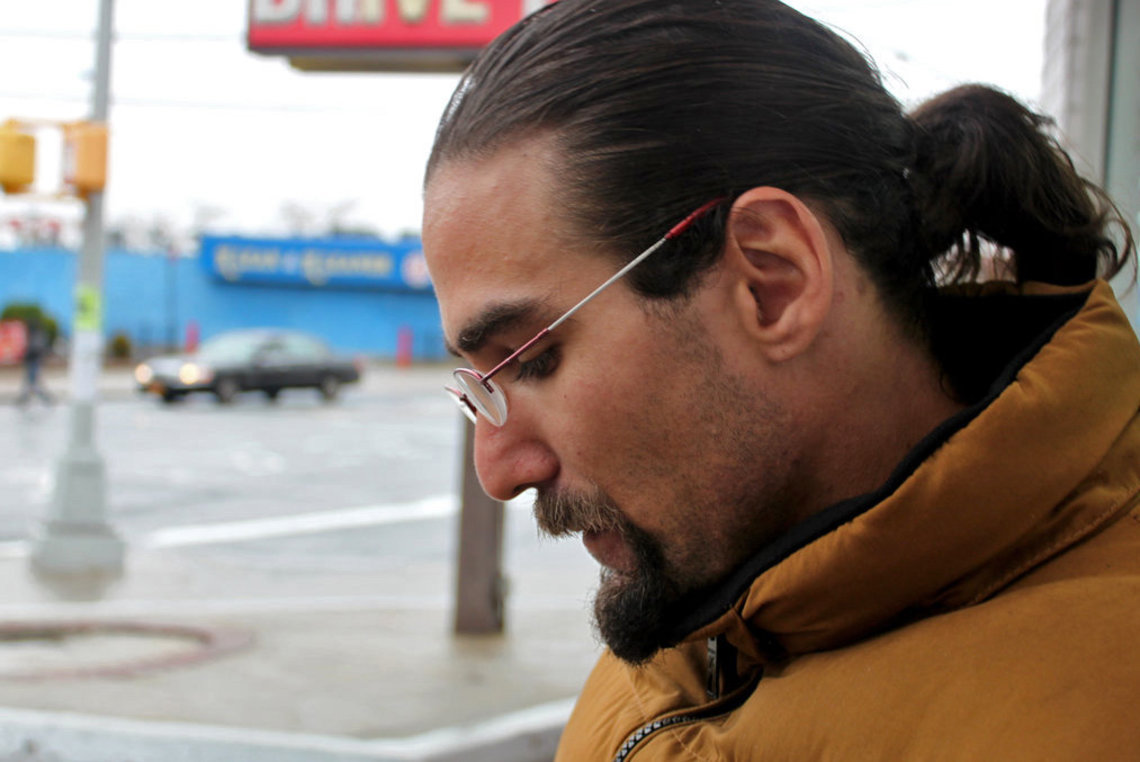 Yantz taking a smoke break in December, not far from the three-quarter house where he's lived since his release.

On Tuesday, the Legal Aid Society in New York City, Prisoners’ Legal Services of New York and lawyers with Willkie Farr & Gallagher sued state and city officials for holding at least 169 people past their maximum sentence since 2014. That’s when a report by a state senator prompted the state corrections department to stop releasing sex offenders to city shelters within 1,000 feet of a school. Only nine of the 200 homeless shelters in the city can house those with a sex offense, and even some of those facilities have refused to accept such residents.

Department of Corrections and Community Supervision spokesman Thomas Mailey says he cannot comment on the pending litigation, but that the department makes “every effort to assist parolees with the Sexual Assault Reform Act (SARA) condition1 in locating appropriate housing.” Officials have said they have the authority to hold parolees in a “residential treatment facility” after his or her maximum sentence, where the person is supposed to receive transition programming and work with a parole officer to find a place to live.

The New York Sexual Assault Reform Act, enacted in 2000, bars high-risk, "level 3" sex offenders, or those whose crime involved a minor, from entering (or living) within 1,000 feet of a school while on parole.

But Legal Aid attorneys say interviews with more than 200 offenders show the treatment facilities are simply prisons where almost no help is offered. “Our clients are being held in conditions that are virtually indistinguishable from any other prisoner,” says William Gibney, director of the Legal Aid Society criminal practice special litigation unit. “They’re not the type of facility the legislature envisioned when they wrote this law.”

Inmates in the treatment facilities must comply with both prison rules and the conditions of their parole, meaning some are hit with fresh sentences for parole violations that would have been infractions for regular offenders, according to the complaint. One plaintiff has served an extra two years in prison because of this.

The lawsuit also claims the city Human Resources Administration and Department of Social Services have failed to ensure enough beds are available for returning sex offenders. "We have been working with the state to resolve the issues raised by the lawsuit," said Lourdes Centeno, an HRA spokeswoman.

Yantz says he had no way to search for a place to live from prison. His father and cousin’s homes were rejected. “I know a guy who put in 19 addresses and got denied at all of them,” Yantz says. “It’s impossible for us to live anywhere.”

Yantz had been allowed to live with his two children at a family shelter while on probation for his sex offense. It was only after he violated that probation, by allowing his girlfriend and her teenage son to spend the night and failing to show up for counseling, that he was sent to state prison and put under residency restrictions while on parole.

Ultimately, the Brooklyn Defender Services found him a bed at a three-quarter house in a remote Queens neighborhood, where public assistance covers most of the $250 he pays each month to share a room with four men and a shower with 17. Yantz moved in on July 29, 2015, more than a month past his maximum sentence. He makes the two-hour trip by subway each Saturday to visit his children in the Bronx. 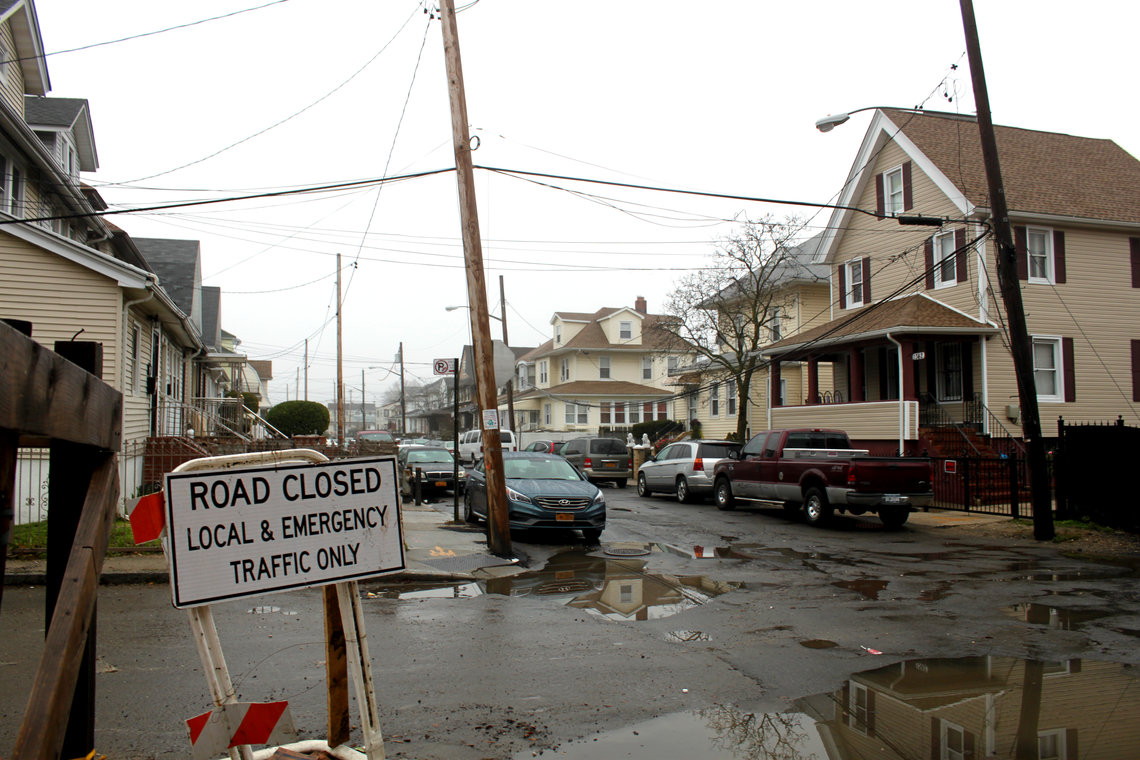 Yantz moved into a three-quarter house on this remote block in Queens after he was held in prison more than a month past his maximum sentence. It is one of the few places in New York City where sex offenders can legally live under residency restrictions.

On a weekday morning this winter, men filtered out of the fading red-shingled duplex between 8 a.m. and 9 a.m., after parole says they can leave the home but before the house manager requires them to leave. Many are going to drug treatment programs, sex offender therapy or anger management classes. A few lucky ones are leaving for work. They can not return to the home until 2 p.m., according to house rules, but must be home by the 8 p.m. parole curfew.

Though the house is more than 1,000 feet from any school, children stream by it on their way to class every morning and a family homeless shelter is down the block. Several men declined to talk about living there for fear of getting kicked out.

Donald Griffin was one of Yantz’ roommates before he moved to a similar house in Brooklyn and then to a shelter on Ward’s Island, where three of the nine eligible shelters are located. Griffin served 29 ½ years for two armed robberies and sexual abuse, which stemmed from searching a woman’s bra for cash. Though the New York parole board told him he would get out no later than Dec. 18, 2014, it was another six months before he found a place to live.

“Every day we looked for a place for him to stay,” says Griffin’s mother, Emma Henry. “Everybody kept asking me, ‘When is he coming home?’” Griffin’s brother and sister were willing to let him have his own room in either of their houses in Brooklyn and Manhattan. But both live within blocks of a school.

“Everywhere you look there’s some kind of school,” Griffin says. “Parole wasn’t helping me; I was relying on family. I’m still somewhat amazed we found somewhere.”

A similar phenomenon occurs in Illinois, where parolees are “violated at the door” for not having an approved place to live. A 2015 Chicago Tribune investigation found that roughly 1,250 Illinois inmates are held past their parole date each year because of a lack of housing.

“I’ve known a number of people who served their entire parole period in prison and then were sent out without any counseling,” says Will Mingus, executive director of Illinois Voices for Reform, an advocacy organization working on reforming state sex offender policies.

Paul, who requested his last name be withheld because of the stigma associated with his crime, served out his parole for a drug conviction in Illinois prison because of an earlier sex offense. At 19, he pleaded guilty to touching his 12-year-old cousin’s breast and was sentenced to probation. (Paul’s family claims it did not happen and that he took the deal for fear of a lengthy sentence.)

Paul was eligible for release after two years of his four-year sentence for selling cocaine. But his parole officer said his mother and stepfather would have to get rid of their computers, smart phones, any toys or kid movies, and that their toddler grandson could never visit. Paul had lived with his parents while on probation for his actual sex offense, but parole had much stricter requirements, even though his drug offense was unrelated.

“I was devastated. ‘What do you mean he can’t come home?’” says his mother, Sue.

Lawyers say those with severe mental illness, physical disabilities or addictions often have an even tougher time finding housing. Treatment facilities are already limited and may refuse to house those on the registry out of concern for other residents.

Kentucky public defender Melanie Lowe’s client, who is in a wheelchair and has serious brain damage, remains in prison nearly two years past his maximum sentence because no nursing home will take him. He has a past sex offense. Corrections officials said they reached out to over 310 nursing homes looking for a place.

“We have to find a solution,” Lowe says. “You can’t just keep people.”

Some states’ response to the problem is simply to let sex offenders fend for themselves. In Florida, many communities have strict residency requirements but don’t require an offender have a formal address in order to be let out. Many have been released to the streets, and ended up clustering under bridges and in homeless encampments. Wisconsin is now facing a similar problem, especially in Milwaukee.

But Mingus of Illinois Voices says corrections officials in most states have their hands tied. “Nobody wants to take responsibility to turning a sex offender loose without having a place to live,” he says. “They’re desperately looking for places for people. Their prisons are overcrowded as it is.”