In Tennessee and other states, former felons can’t always afford it.

Bill was surprised to learn he still had a felony record.

For decades he believed that his 1973 conviction in Memphis for possession and intent to sell four ounces of marijuana had been erased, because that is what he was told after he finished the court-mandated community service at the time. Now a retired mechanic, Bill passed several employer background checks over the years with no trouble. But apparently the record of his felony lived on, a fact Bill became aware of when he was denied a renewal of his concealed carry permit last year in Arkansas, where he now lives.

“You’re 22 years old, fresh from the military, and you make one mistake and it haunts you in your late 60s. It’s strange,” said Bill, who asked that only his first name be used because of the long-ago conviction.

But when he sought to clear his record he learned that Tennessee would charge him $450, one of the highest such fees in the country. 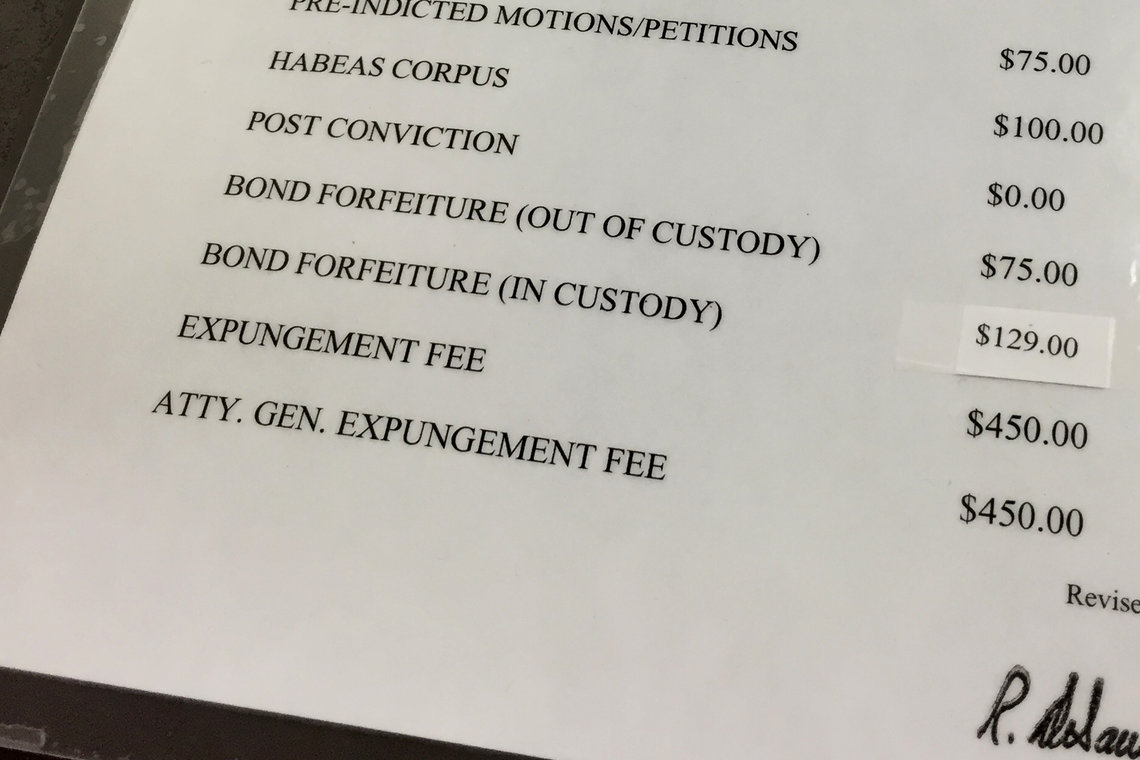 On the list of fees at the Shelby County Criminal Court, expungement is by far the most expensive.

“I couldn’t afford it. I’d have to give up something, maybe eating, and I really like doing that,” Bill said.

Many states charge $150 or less to apply for expungement, the legal term for clearing a criminal record, and some states offer a waiver if the applicant is too poor to pay. But the Tennessee legislature wanted money for the state’s general fund, so it set the fee much higher.

While a gun permit may be discretionary, a decent job or money for an education are crucial, and for many people once convicted of a crime, Tennessee’s high fee has put expungement out of the reach. In Tennessee, there are 958 restrictions based on a criminal record, including disqualification for any state-funded student loan or grant. A record also bars employment in a number of fields and any job that involves working with children.

In recent years, increased attention to the connection between these restrictions, which make it difficult to lead a stable life, and recidivism has spurred lawmakers in states across the country to pass legislation affording those with a conviction or an arrest a clean slate, according to a Vera Institute report. Between 2009 and 2014, 31 states and Washington, D.C., established or expanded expungement laws. Most laws only included misdemeanor convictions or arrest records.

A growing number of states are including some low-level, non-violent felonies. Of the 17 states that do so, the application fee is generally in line with standard court fees. But three states are charging far more. Tennessee’s $450 is trumped by Louisiana's $550 fee, and as of July, Kentucky will charge $500.

“These agencies are not getting the funding that they need to function, so it’s hard to ask them to bring it down.”

Louisiana’s high fee results from inefficiencies that make processing an application arduous — the state’s jurisdictions are largely autonomous, with no central storehouse for information, said Adrienne Wheeler, executive director of the Justice & Accountability Center of Louisiana, a group that has worked to make expungement more accessible. Further, the justice system — from the state police to sheriffs’ departments as well as district attorneys and court clerks — are underfunded and depend on fines to make up for the tax dollars they don’t receive.

“We were pretty vocal that this was an impossible cost,” said Wheeler of recent reform discussions. But, she said, “These agencies are not getting the funding that they need to function, so it’s hard to ask them to bring it down.”

In Tennessee and Kentucky, bloated prices have little to do with processing the application, but rather the state revenue they were designed to produce. Fifty-five percent of the cash collected in Tennessee goes into the state’s general fund. In Kentucky, it will be a full 90 percent.

The prospect of revenue is exactly why Tennessee lawmakers were persuaded to pass felony expungement legislation in 2012, said State Representative Raumesh Akbari, a Democrat. At the time, the official estimate was that the law would raise $7 million for the state annually. In reality, it has generated only about $130,000 each year according to an analysis by a criminal justice nonprofit, Just City. The lack of income is tied to the fact that few would-be applicants can afford to apply, Akbari said.

Public awareness of the issue is gaining momentum in Tennessee. At a fundraising event in February, Memphis Mayor Jim Strickland raised $55,000 in private donations to cover the cost of expungement for indigent applicants. A similar fund run by Just City, which eventually paid for Bill’s expungement, has underwritten 70 applicants since its launch three years ago — a modest gain, said Josh Spickler, the Just City executive director.

“The real battle is at the statehouse,” he said.

The relatively small revenue stream provided by the expungement fee has complicated legislative reform. A recent bill, sponsored by Akbari, would have lowered it by $100. It had wide bipartisan support, but never made it to the floor because it would have reduced overall income by $88,000.

Akbari is undeterred and plans to reintroduce it next year. The $100 reduction is a baby step, she said. Eventually she would like the fee to reflect only the cost of processing the application.