A star of reality TV, Beth Chapman takes on those who say money bail is unfair.

The group that represents the country’s 15,000 bail agents will gather in Mississippi next month for its annual summer conference, focused on pushing back growing efforts to eliminate money bail and refuting the critics who say it unfairly penalizes the poor.

Leading the fight will be the group’s highly visible new president, Beth Chapman, former star of the reality television shows “Dog the Bounty Hunter” and “Dog and Beth: On the Hunt,” which featured the adventures of Chapman and her husband, Duane, as they tracked down bail jumpers. 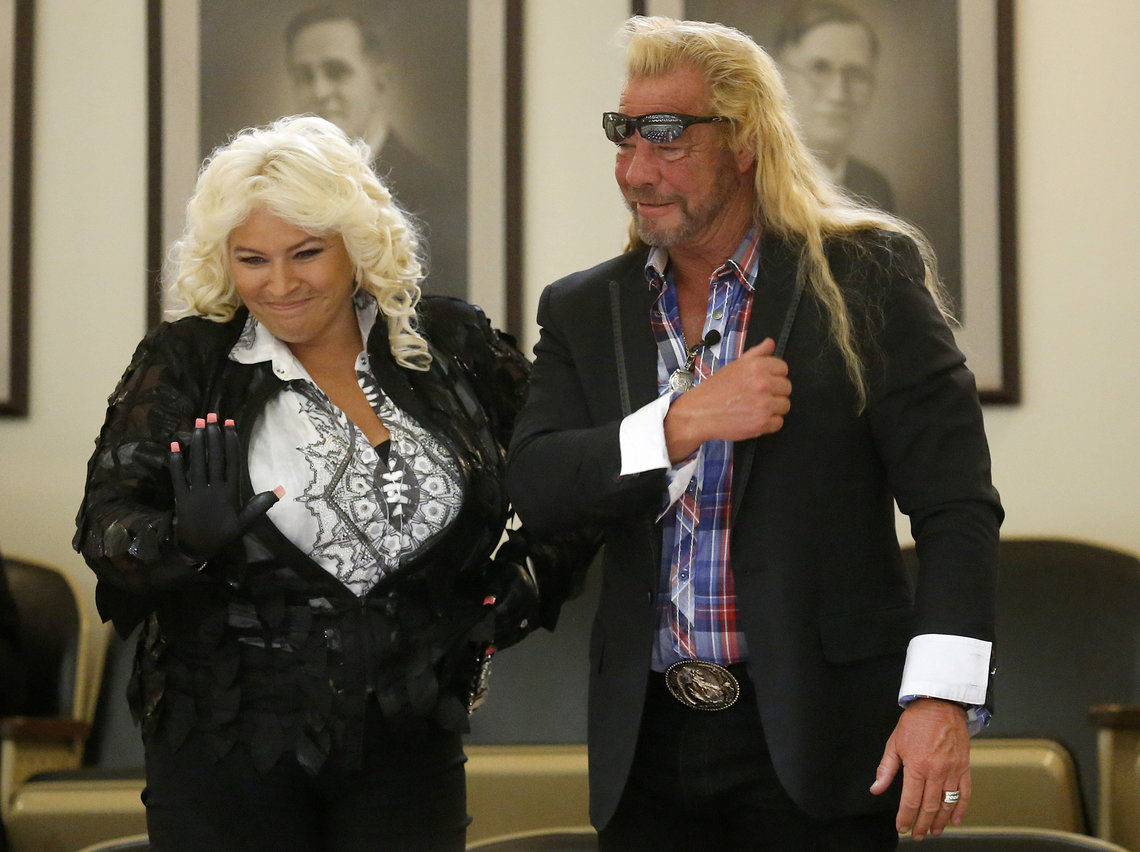 Beth Chapman, left, and husband Duane "Dog" Chapman are introduced in the gallery of the Oklahoma Senate in Oklahoma City in April 2013.

The couple abruptly ended their reality television work in January, when Beth Chapman, 48, announced that she was running for president of the Professional Bail Agents of the United States. “Our industry is under attack,” Chapman told In Touch Weekly, a celebrity-gossip magazine. Her election in February was cheered by many in the bail business across the country who hoped she would use her clout — and her total of almost a million followers on Facebook and Twitter — to combat efforts to change or eliminate the current system.

The role of for-profit bail bonds in America began in the early 1900’s, and it typically works like this: A judge requires a defendant to post a set amount of money with the court in order to get out of jail, which is returned when the person appears for trial. Those who lack the full amount may use an agent, who charges a non-refundable fee, usually 10 percent of the bail amount, to post a bond and bail them out. It’s a unique system (bail bonding for profit is legal only in the United States and the Philippines) and critics contend it can leave low-risk defendants who can’t even afford the 10 percent sitting behind bars while dangerous suspects with resources are freed.

Citing the inequities of the current system, critics have proposed alternatives that avoid money bail altogether. Washington, D.C., for example, is cited as a reform model. There, courts conduct risk assessments of defendants and if they are not considered dangerous or likely to flee, they are released, sometimes under a monitoring program. Defendants deemed risky, about 15 percent of arrestees, remain in jail. The system is widely regarded as a success, since few of those released fail to appear in court or are arrested on a new charge.

Efforts to change the system have gained momentum. In the past year, legislation challenging current bail policies was introduced in at least half a dozen states and at the federal level. At the same time, cities in Alabama, Missouri, Louisiana, and Mississippi have done away with money bail for misdemeanors and traffic violations after pressure from lawsuits challenging its constitutionality. Similar lawsuits are pending in federal courts in California and Texas, and in the 11th Circuit Court of Appeals in Atlanta. The outcomes could have a widespread impact on money bail throughout the country.

Beth Chapman declined to be interviewed for this article. But Chapman has spoke openly about her efforts in the recent past. She told Politico: “I’ve just taken over this association and I'm going to be very aggressive in this fight." Her work has brought her to the federal courthouse in Oakland, Calif., to speak out against a lawsuit challenging the constitutionality of money bail, and in May she met with Gov. Dannel Malloy of Connecticut, whose effort to reform the state’s bail system this session ended in defeat. While Chapman’s role in that bill’s failure is unclear, she has taken credit for efforts elsewhere. "I just killed a bill in Idaho,'' Chapman told the Hartford Courant during her Connecticut visit. "I'm about to kill a bill in Kansas. ... People are not in jail because they're poor. They're in jail because they broke the dang law.”

The bail agent’s association, under Chapman’s leadership, has stepped up its defense in other ways. This March, she wrote a newsletter to bail association members informing them that they had hired their first lobbyist since 2001, Terry Allen, the president of Fidelis Government Relations, who also has worked as the presidential campaign manager for Rick Santorum. The group also retained Harmeet Dhillon, of the Dhillon Law Group, to deal with the bail lawsuits.

Chapman’s role at the forefront of the bail industry is the culmination of years of experience in the bail-bond business. According to the Country Music Channel biography for her show “Dog and Beth: On the Hunt,” she became a licensed bail agent at 21 and has owned multiple bail bond businesses since.

“This is the first time in history where people are advocating for the reduction, if not the elimination, of secured money bail,” said Charles Shaw, vice president of the Georgia Association of Professional Bondsman. “Beth is a trailblazer. She kind of puts you in the mindset of Obama or Trump or Reagan. She’s not the status quo, and people gravitate toward her.”