How Mexico Saves Its Citizens from the Death Penalty in the U.S.

A fund is designated to train, pay and advise American defense lawyers.

When the body of 25-year old Lesley Hope Plott was found lying in a ditch in Russellville, Ala., in February of 2013, police had little trouble zeroing in on a suspect: hours earlier, a nearby church’s security camera had recorded her being beaten and stabbed by her estranged husband, Angel Campos Nava.

This story was produced in collaboration with The Atlantic.

Born in Mexico, Nava, 36, had come to the United States years earlier. He had already been convicted of assaulting Plott on two earlier occasions. A murder conviction could result in the death penalty. It was up to Rebecca Thomason, Nava’s lawyer, to convince the Franklin County district attorney to instead seek a life sentence, or, failing that, to convince a jury to spare his life. It didn’t help that Nava was undocumented, and they were in Alabama, a state with some of the harshest anti-immigration laws in the country.

Then, Thomason received a call offering her something few lawyers in death penalty cases get: money, training, and advice, courtesy of the Mexican government. Nava’s case had caught the attention of the Mexican Capital Legal Assistance Program, created by Mexican officials in 2000 to save the country’s citizens from execution in the United States.

One of the program’s chief purposes is to help defense attorneys construct a biography of the accused—to humanize them. Poverty, family dysfunction, and developmental disability are frequent themes in their clients’ lives. When presented as part of a defense, such themes can encourage mercy among jurors and dissuade them from handing down a death sentence.

To that end, the program arranges for lawyers to go to Mexico to track down school and hospital records and stories about their clients’ lives, either paying for their travel costs or advising them on how to request money from local courts. Under the program, Mexico pays American lawyers up to $220 an hour to track potential death penalty cases around the country—watching court decisions and news stories from the moment of arrest, all the way through the last minute scramble before an execution—and advise court-appointed lawyers like Thomason.

Since 2008, the program has provided these attorneys with an average annual budget of around $4 million to track as many as 135 cases at a time, according to the program’s filings with the Department of Justice. That comes out to roughly $29,000 per case, per year. By contrast, the Equal Justice Initiative, which represents numerous inmates on Alabama’s death row, has reported that many of them were sentenced to death after their attorneys’ fees were capped at $1,000 for out-of-court trial preparation.

More resources and training translates into more compelling stories, as defenders plead for mercy for their clients. Monica Foster, a lawyer in Indianapolis who worked with the program for several years, explained that she would connect defense attorneys with officials in Mexico, who would help them travel to their clients’ hometowns, many of which were often inaccessible by paved roads. “We’d help them understand...how you take that story and meld it into a complete package of ‘How did this person end up in [the United States] and why should a jury feel compelled to extend mercy to them?’”

Houston-based attorney James Stafford was appointed to represent Mexican immigrant Francisco Castellano in 2005 for the murder of Castellano’s niece. “When you’re court-appointed you have limited resources in terms of what the court will give you to develop a defense,” Stafford said. “It creates a team approach, where you have people at your disposal who can do research, talk to witnesses, etc., instead of it being a one-man shop.”

Stafford says the program’s help finding mitigation evidence led to his success getting a district attorney to drop the death penalty and allow a plea for a life sentence. Such a scenario is not uncommon. In a 2008 Hofstra Law Journal article, Greg Kuykendall, the Tucson, Arizona-based director of the program, claimed that it had a 95 percent success rate in keeping roughly 300 Mexican nationals from being executed. Such numbers are difficult to verify, however, because the program tends not to share much about its work publicly; Kuykendall was not granted clearance by the Mexican government to be interviewed for this story. Mexican Embassy spokesman Ricardo Alday told The Marshall Project, “Mexico in no way condones or sympathizes with any criminal behavior for which some of its citizens have been accused,” but the country’s government “opposes the death penalty as a matter of principle and has a strong policy of protecting its nationals abroad including in the United States.”

The program reflects how widespread international opposition to the death penalty is having an impact in the United States. It also highlights a complaint routinely made by defense attorneys—that they are not given enough resources to do their jobs effectively—by showing what often happens when they do have those resources: they avoid the death penalty.

The United States and Mexico have a long, contentious history when it comes to the death penalty. In the 1920s, American journalist Alma Reed campaigned to save the life of a 17-year-old Mexican on death row in California, earning herself an audience with the country’s president, Álvaro Obregón. Writing on the current defense program in the Arizona Journal of International and Comparative Law, lawyer Michael Fleishman has noted that, since then, Mexico’s largely Catholic population has come to consider American executions of their citizens a “tool of the bully to the north” and a sign of “Yankee imperialism.”

In the 1970s, as the U.S. Supreme Court struck down and then revived the death penalty, the United States saw a lull in executions. But when they resumed, some invariably involved Mexican nationals, and the country’s government began giving money and advice to defense lawyers in the United States—a precursor to the current program. This, inevitably, sparked the occasional flare-up. In 1994, a Mexican migrant worker named Aurelio Barajas was sentenced to death for the murder of a convenience store clerk in Idaho. Mexico helped fund his appeals, which eventually led prosecutors to negotiate down to a life sentence once his lawyer produced evidence that suggested he was mentally incompetent to stand trial, and showed that the psychologist who examined him did not speak Spanish.

“Imagine an American in a small town in Mexico accused of killing someone ...We are going to use the same force the United States would in such a case to help one of our own,” Laura Espinosa, a deputy consul in Salt Lake City, told The Los Angeles Times at the time. In response, Idaho solicitor-general Lynn Thomas complained about “foreign governments bankrolling the opposition with unlimited resources.”

At times, capital punishment has joined a broader set of tensions over U.S. immigration policy towards Mexicans. In 1997, a mariachi band played “Beautiful and Beloved Mexico” at a bridge over the Rio Grande river to greet the returning body of Irineo Tristan Montoya, a Mexican national who had been executed in Texas for stabbing to death a driver while hitchhiking. “Steel walls along parts of the border, increasingly restrictive immigration laws, violence and discrimination faced by many immigrants in the United States—Montoya has come to represent all such insults,” the Associated Press reported at the time. Five years later, shortly after the 2002 execution of Mexican citizen Javier Suarez Medina in Texas for the murder of a police officer, Mexican president Vicente Fox refused an invitation to George W. Bush’s ranch in Crawford, Texas.

Sandra Babcock, the American lawyer who in 2000 became the first director of Mexico’s formal program to help capital defendants, saw the country’s involvement in capital defense as proof that her own country was falling down on its obligations to defendants. “I think it’s shameful,” she told The Texas Observer. “There’s extreme poverty and here we have the wealthiest country in the world that cannot provide adequate resources and competent legal counsel to people who are facing the loss of their lives.” The help didn’t always lead to success: 10 Mexican nationals have been executed in the United States since 1976, according to the Death Penalty Information Center (in addition to 22 citizens of other countries).

In some cases, foreign consulates have not been informed that citizens of their nations were were facing the death penalty in the United States. Mexico, the United Kingdom, Paraguay, and Germany have all argued that they might have been able to help their citizens avoid a death sentence had they been informed. These complaints came to a head in 2004, when Mexican lawyers convinced the International Court of Justice in The Hague to rule that, in more than 50 death penalty cases, the United States had violated the 1963 Vienna Convention on Consular Relations by failing to notify Mexico when its citizens had been arrested. That ruling led to Medellin v. Texas, a U.S. Supreme Court case in which the state, represented by then-Solicitor General Ted Cruz, argued that the international court’s ruling had no power over the states. The court ruled 6 to 3 in favor of Texas, noting there was no federal law making that treaty binding on the states.

Since then, the Mexican government has lobbied Congress to pass a law requiring states to notify Mexican consulates when their citizens are arrested. In a 2014 letter to House Judiciary Committee Chairman Bob Goodlatte, Mexican Ambassador Eduardo Medina Mora wrote, “I respectfully submit that the United States would not countenance the same treatment of U.S. citizens by another signatory” to the Vienna Convention.

Shortly after Rebecca Thomason was appointed to defend Nava in 2013, the program flew her to Texas and California for training. At one session in Houston, she met Charlie Goff, an anthropologist who runs a language and culture school in Cuernavaca, Mexico. Goff flew to Alabama and discovered that a court-appointed interpreter had been using a Spanish dialect unfamiliar to the defendant, who spoke little English. “Nobody else could talk to him,” Goff said. He convinced Nava to share details about his background. He said he was from El Terrero, a tiny village in the southern Mexican state of Guerrero.

So Thomason and Goff planned a trip (El Terrero is on the U.S. State Department’s travel warning list. Before Thomason left, the local district attorney, Joey Rushing, joked darkly that he would create a GoFundMe page to raise money if she was kidnapped). There are no hotels in El Terrero, so the defense team stayed with Nava’s extended family. “I think she had probably never seen poverty like that … Open sewage, dirt streets,” Goff said of Thomason. She learned about Nava’s upbringing—“the drunken father, the angry mother taking a piece of firewood and hitting the kids.” It became clear to her why her client would have been desperate to leave. 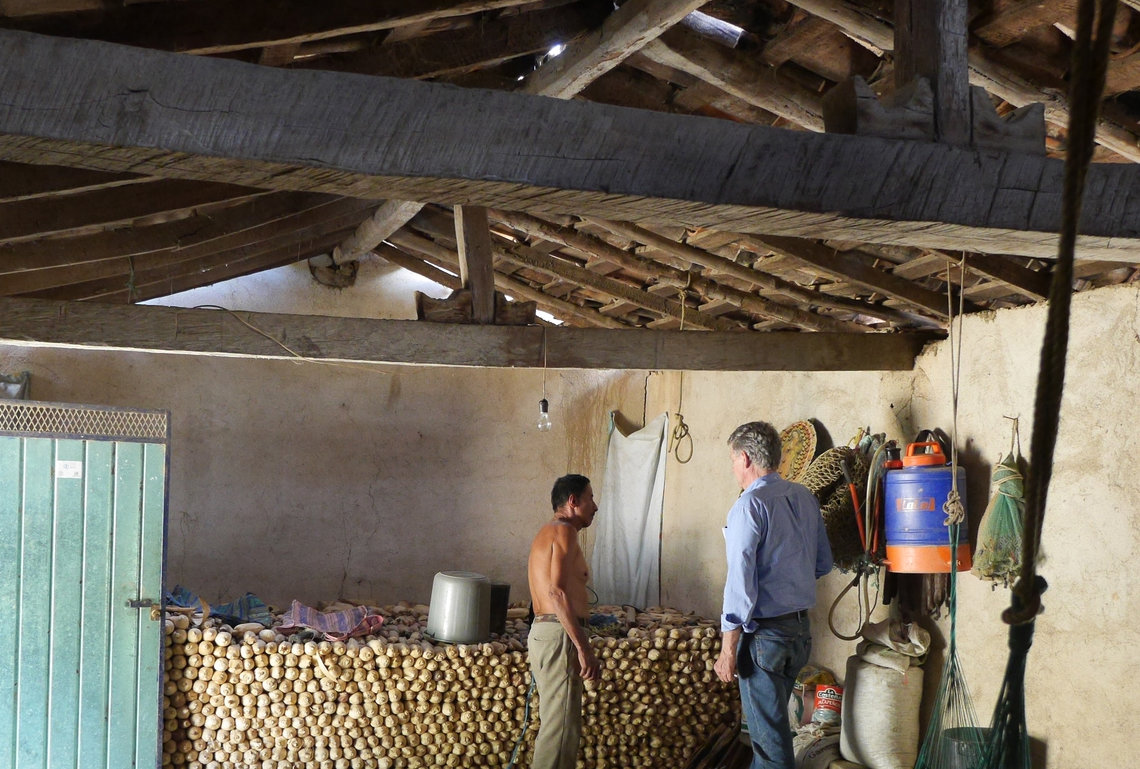 When Thomason returned to Alabama, she met with Rushing, the district attorney, and was candid about the mitigation evidence she would bring before the jury. “I told him how many people lived in one little bedroom, how when he was a child he was beaten,” Thomason said. “He tried to pretend like it didn’t get to him, but it got to him.”

Rushing—who, like other district attorneys interviewed for this story, expressed no qualms about Mexico’s involvement—shared this information with the victim’s family. They agreed to support his decision, in June 2015, to let Nava plead guilty and avoid the death penalty.

Nava is currently serving a life sentence. He will be up for parole in 2028. If let out, he will immediately be deported to Mexico.