In Alabama, You Can Be Sentenced to Death Even if Jurors Don’t Agree

Judges have uniquely uncommon power in the state.

By Kent Faulk
Graphics by Tom Meagher and Yolanda Martinez.

Ronald Bert Smith walked into a Huntsville, Ala., convenience store with a Colt .45 semi-automatic pistol on Nov. 8, 1994, and shot clerk Casey Wilson to death during a robbery captured on video.

A jury in August 1995 unanimously convicted Smith of capital murder. Then the jurors, in a 7-5 vote, recommended that the judge sentence Smith to life without parole instead of death.

So why, 21 years later, is Smith, now 45, set to be strapped down to a gurney and executed by lethal injection on Thursday?

This story was published in partnership with AL.com.

The answer lies in Alabama’s death-penalty law, the only one of its kind in the country.

Thirty-one states have the death penalty, and 30 of them require unanimity from a jury in crucial phases of sentencing. Not in Alabama, where a jury can impose a death sentence with a vote of at least 10 to 2. The jury may also recommend life imprisonment, as it did in Smith’s case, but the judge can overrule jurors’ findings no matter what they decide.

Until recently, two other states kept Alabama company — Delaware and Florida. But each has now revised its code in light of state and federal court rulings, leaving Alabama isolated.

And while the Alabama Supreme Court has upheld the constitutionality of the death-penalty statute as recently as September, the defense bar as well as experts on capital punishment are seeing increasing pressure on Alabama to make jury unanimity the law and do away with judicial override.

With indecisive juries, and judges free to go their own way, the likelihood of injustice grows, legal experts say. In fact, jurors who vote against the death penalty may harbor doubts about the guilty verdict they imposed earlier, said the authors of a recent article in The Yale Law Journal. “We know of at least three cases in Alabama where an innocent (later exonerated) person was convicted of capital murder and the judge overrode the jury’s recommendations for life,” said Patrick Mulvaney, who with Catherine Chamblee, of the Southern Center for Human Rights, wrote the article. “We think that override is really a problem.” Mulvaney also warned that politics can play a role — especially in tough-on-crime states like Alabama, which elects its judges.

Of the 57 executions in Alabama since the death penalty was reinstated in 1983, 29 involved non-unanimous jury votes, ranging from 11 to 1 for death to 11 to 1 for life, according to an AL.com, Marshall Project review of each case.

Alabama executions by jury sentencing recommendation
Death-penalty sentencing schemes vary widely around the United States, but all—except Alabama’s—lean toward the jury having the final say in sentencing. In Alabama, more than half of the executions since the reinstatement of capital punishment have come in cases where a jury did not unanimously recommend a death sentence. 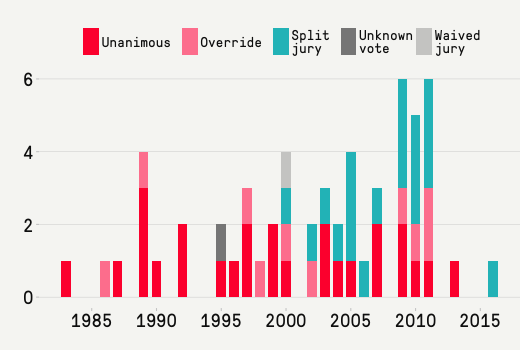 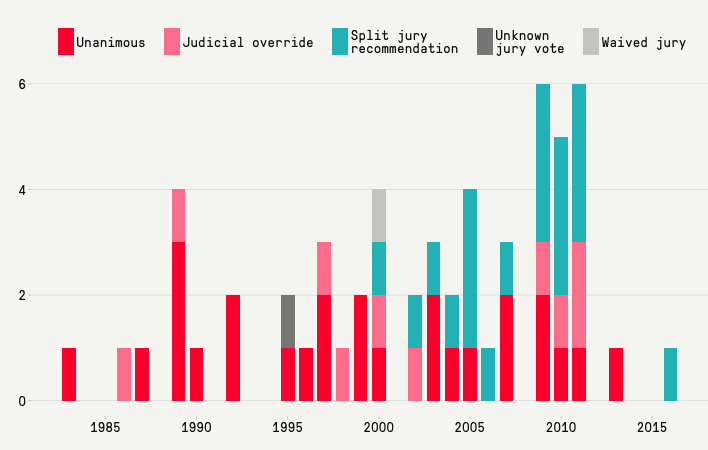 Death-penalty sentencing schemes vary widely around the United States, but all — except Alabama’s — lean toward the jury’s having the final say in sentencing, said Robert Dunham, executive director of the Death Penalty Information Center.

In Montana and Nebraska, for example, juries don’t make sentencing recommendations, he said. Instead, they are required to issue a unanimous fact-finding verdict that at least one aggravating circumstance exists in order for the death penalty to be applied in the case. The judge determines the actual sentence.

In Indiana, which changed its statute in 2002, if there is a unanimous verdict for a sentence, then the judge cannot disregard it. If the jury can’t make a unanimous recommendation, then it is treated as if there was no recommendation and it’s up to the judge.

Most other states have jury sentencing in capital cases, and those verdicts must be unanimous for the death penalty, Dunham said. There are also states where a judge can override a jury-imposed death sentence in favor of life without the possibility of parole, which is “a safeguard against runaway juries,” he said.

Alabama judges can also override a unanimous jury recommendation for death, but that has rarely happened. Alabama judges were the only ones to exercise their override authority to impose death over the past 16 years.

Until this year, Delaware and Florida permitted juries to issue non-unanimous verdicts for the death penalty and also allowed judges to override jurors’ recommendations. But in January, a United States Supreme Court decision in a murder case, Hurst v. Florida, compelled both states to change their procedures.

In Hurst, the High Court found that Florida’s law failed to give juries enough influence in deciding whether to sentence a defendant to death. The jury had voted 7 to 5 for the death penalty. The judge then reviewed the facts of the case separately and concurred. But the High Court rejected that approach.

Writing for an 8 to 1 majority, Justice Sonia Sotomayor, said “The Sixth Amendment requires a jury, not a judge, to find each fact to impose a sentence of death. A jury’s mere recommendation is not enough.” The Hurst decision grew out of the High Court’s prior ruling in Ring v. Arizona (2002), holding that juries — not judges — must find the facts necessary for a case to be death-penalty eligible.

How many jurors must vote for a death sentence?
Each death penalty state has its own procedures for the role of juries in capital cases. But in almost all of them, jurors must be unanimous in finding a defendant guilty and in recommending he be sentenced to death. After Florida and Delaware rethought their capital sentencing schemes this year, Alabama is now the only state where someone can be sentenced to death by only 10 out of 12 jurors.
Note: Juries in Nebraska and Montana must reach a unanimous decision on at least one aggravating factor, then the judge or a panel impose the sentence. The Florida Supreme Court ruled that unaminous juries are needed to impose a death sentence but this change is not yet reflected on the state's statute. Colorado, Pennsylvania, Washington and Oregon are not enforcing the death penalty due to gubernatorial moratoriums. The Delaware Supreme Court struck down its death penalty statute in August.
Source: Death Penalty Information Center

As a result, in August, the Delaware Supreme Court struck the state’s death penalty law, saying that a jury — not a judge — must decide the sentence and that it must be unanimous on the part of jurors.

Then, in October, Florida’s top court ruled that juries must be unanimous in their recommendations for death.

So far, however, legal authorities in Alabama have rejected Hurst as a blueprint for change.

Although defense lawyers around the state have filed a flood of petitions seeking to stave off possible death sentences in the wake of the Hurst decision, prosecutors and Alabama Attorney General Luther Strange have repeatedly argued that Alabama's law was upheld by the U.S. Supreme Court in 1995 and is not the same as the portion of the Florida law struck down in Hurst.

Florida’s law had required the judge — not the jury — to find the existence of an aggravating circumstance in order for the defendant to be subject to the death penalty.

"In the Florida case, the holding is that a jury must find the aggravating factor in order to make someone eligible for the death penalty,” the Alabama attorney general has stated. “Alabama's system already requires the jury to do just that.” 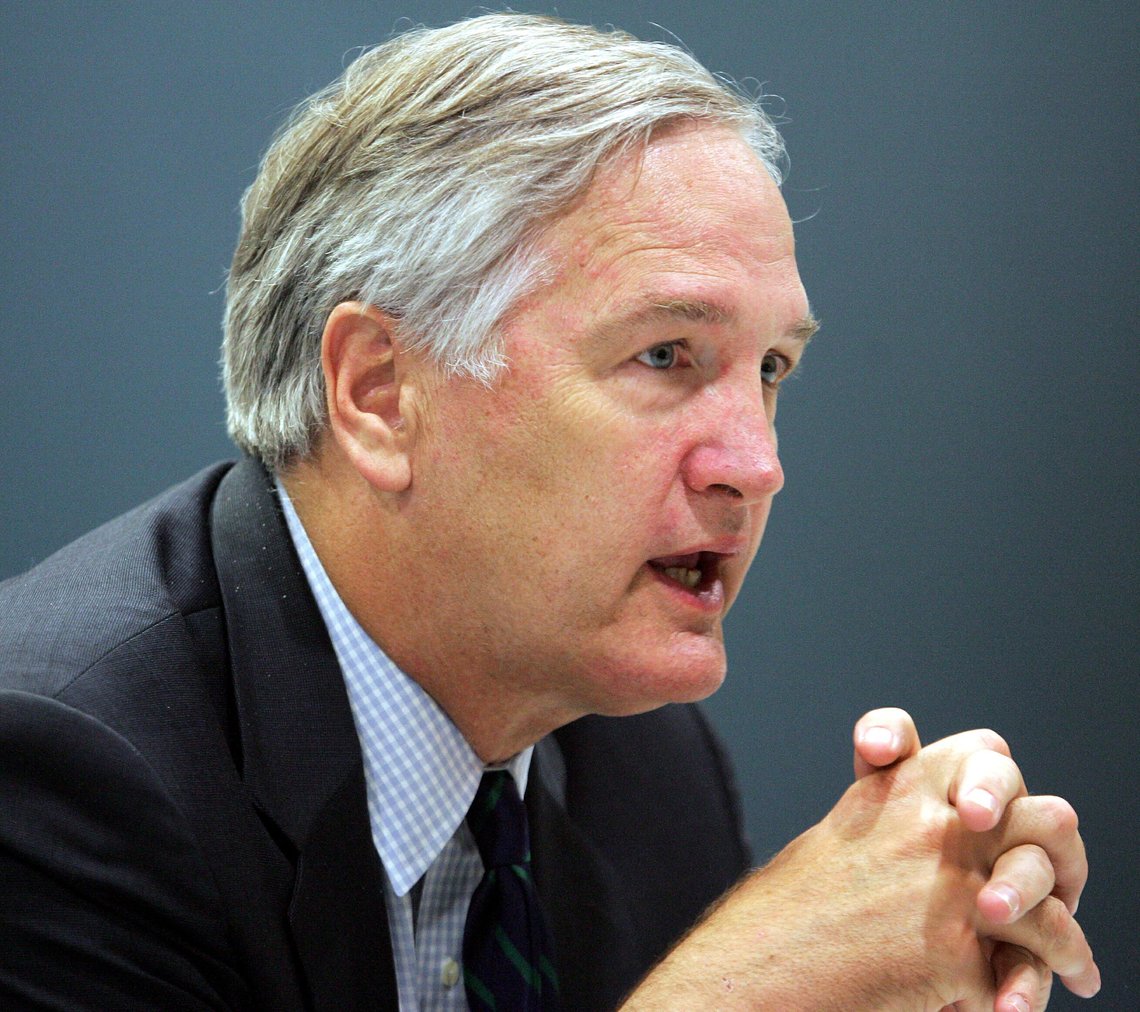 Alabama Attorney General Luther Strange has repeatedly argued that Alabama's death penalty law is not the same as the portion of the law struck down in Hurst v. Florida, which held that a jury must find the aggravating factor in order to make someone eligible for capital punishment.

In capital murder cases with the death penalty in Alabama, the jury must find an aggravating factor — murder during the commission of a robbery, kidnapping or rape, for example. Therefore, at the time of conviction, the jury has already agreed upon at least one aggravating factor that would make the defendant eligible for a death sentence, according to the Alabama Supreme Court.

Dunham asserts that Alabama prosecutors are relying on a very narrow difference between Alabama’s death-sentencing scheme and the one that was in place in Florida in the Hurst case. “If a judge considers aggravating facts that the jury does not find and weighs them that would be a violation of Hurst,” he said.

“The judge in Alabama is free to disregard a jury’s recommendation of life … I don’t think that you need better proof than that that it is independent fact-finding by the judge,” Dunham said.

Defense lawyers also have repeatedly argued that the Hurst ruling means juries must have the final say in what sentence — life or death — a capital murder defendant gets. And in that regard, they say, Alabama law falls short.

"I think we are finding that one individual [a judge] should not be the final voice on whether someone should live or die. That should be a decision for 12 people," said Emory Anthony, a Birmingham lawyer who has filed motions for several defendants seeking to have their capital murder charges dismissed in light of the Hurst decision. If dismissed, prosecutors could seek murder charges that wouldn’t allow for the death penalty.

Although the future of Alabama’s sentencing law is unclear, there are signs that the U.S. Supreme Court is keeping watch. This spring, the High Court sent back the cases of three death row inmates and asked the Alabama Court of Criminal Appeals to review them in light of the Hurst decision. The high court didn't say in its brief orders what it was about each of those cases that the appellate court should consider because in each case the judges followed jurors' recommendations for death. One recommendation was unanimous and the other two split decisions, with one or two jurors voting against death.

The Alabama Court of Criminal Appeals hasn’t yet acted on that request. But in a ruling in June it ordered a state circuit judge to vacate her March 3 ruling that declared the state's capital punishment sentencing scheme unconstitutional in light of Hurst.

"Alabama is out on the limb and the U.S. Supreme Court has already suggested it might be pulling out the saw," Dunham recently told AL.com. 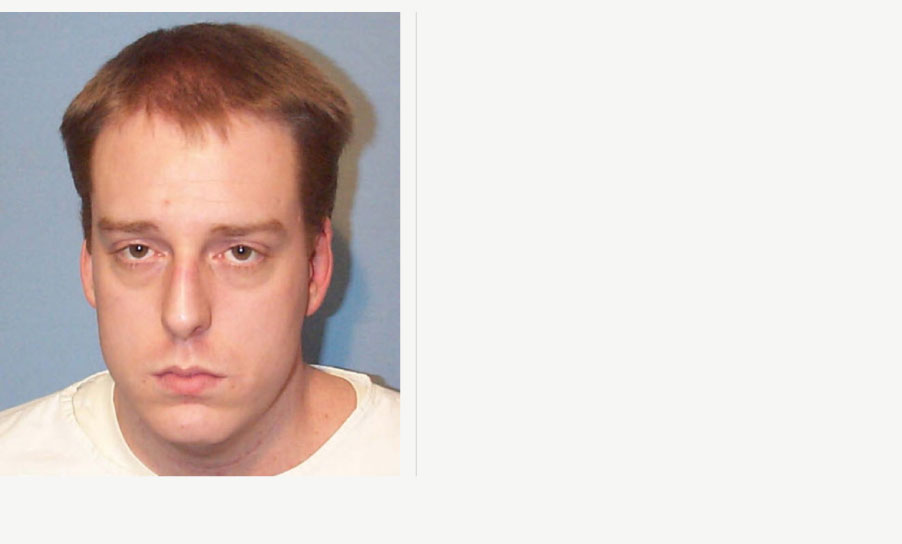 For Ronald Bert Smith, any attempts to repeal or refine Alabama’s sentencing law will come too late. The jury’s split decision for life in prison and the judge’s sentence of death remain unchanged.

One of his defense lawyers at the trial, Jackie Graham, said recently, “I’m sure I was surprised since the jury had voted for life and due to the fact he was a young guy. He had a young child.” Smith’s two accomplices got lesser sentences.

Graham, who defended clients in three capital murder trials, says she isn’t against the death penalty. But she believes the jury should have the say in both the verdict and sentence. “I honestly think the jury should make the decision,” Graham said. “If they are going to make a recommendation, then why shouldn’t that recommendation be binding?”