Waiting for a Reprieve That Never Comes

For defenders, the frantic paperwork ends, and so does a client’s life.

The following narrative tracks the day of Ron Smith’s execution, Dec. 8, from the perspective of his legal team at the Middle District of Alabama Federal Defender Program. Smith, of Huntsville, Ala., was sentenced to die for the 1994 murder of Casey Wilson, a convenience store clerk with a wife and infant son. Ron confessed to the murder, and his jury recommended a life sentence without the possibility of parole. But a judge overrode this recommendation in favor of death. Alabama is the last state that permits judges to impose death sentences on individuals whose juries recommend life.

9 a.m.
We finished filing every appeal we expect to file yesterday, and now all that’s left to do is wait. The team is gathering in the office of John Palombi, the lead defender in the case. Two loaves of homemade beer bread, still hot, and a stick of butter, sit on John’s desk, next to trail mix and some homemade butterscotch nests a colleague made earlier in the week. John’s wife, a much-loved former investigator in our office, is here for moral support.

Noon
Christine Freeman, the head of the office, Spencer Hahn, a defender, and Susan Watts, an investigator, leave the office for the two-hour drive to Atmore, home to the Holman Correctional Facility. They will spend part of the afternoon at the visiting yard with Ron and his family. Then Susan will return to the hotel to wait with Ron’s family, while Spencer and Christine, who have volunteered to witness the execution, will wait at the prison. Christine has known Ron since we took his case in 2005.

Susan has forged a deep connection with his family, especially his son, over the past several months as she collected information for the clemency petition and helped prepare them for the execution date.

All day, we wait. Every hour that passes without word from the U.S. Supreme Court increases our optimism — surely they wouldn’t be taking so long unless they were going to take the case and stay his execution, we tell ourselves. Gov. Robert Bentley has had our clemency package since November — a 40-page petition detailing Ron’s personal story and arguing that judicial override has no place in a modern death-penalty system. The package contains almost two dozen exhibits, including pleas from a juror, two retired corrections officers, and a host of Ron’s family and friends. In living memory, only one death row prisoner has been granted clemency from a death sentence in Alabama.

Still, we wish we’d been able to arrange a meeting or phone conversation between Ron and the governor. Ron is well-spoken, smart, and likeable. He confessed to the murder at the time of his arrest and he’s been a leader on death row, serving as a trustee, helping guards, and working as the editor of a newsletter produced by Project Hope, an organization that works for the abolition of the death penalty. 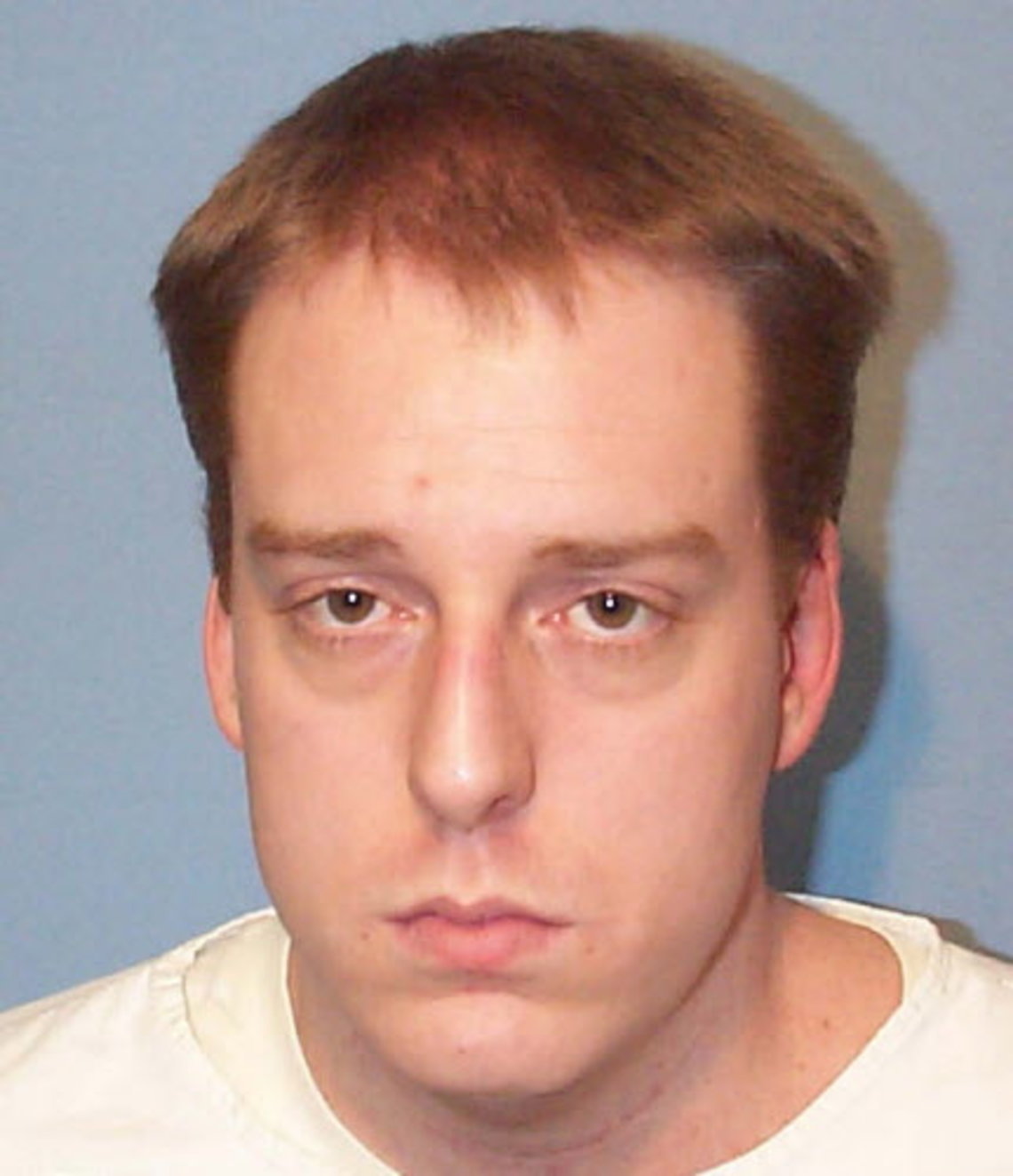 In January, the Supreme Court invalidated Florida’s judicial-override statute, saying that juries must unanimously decide on the aggravating factors that lead to death sentences. In the nearly 11 months since then, Florida and Delaware have jettisoned their judicial-override provisions, while Alabama has insisted that its capital sentencing scheme — nearly identical to the Florida scheme found unconstitutional — needs no revision. Ron is the first person to face execution on a judicial override since the Florida decision. We are all hoping — and those of us who pray are praying —that the High Court will use Ron’s case to clarify that judicial override is unconstitutional everywhere.

3:45 p.m.
What chit-chat has been going on stops. We all know that Ron’s family is saying goodbye to him now. Corrections officers will come to take him away from the visiting yard soon, and our office knows from experience that it will be easier for everyone if the family controls its own leave-taking. Unless we are very fortunate tonight, this will be the last memory Ron’s elderly parents and his 22-year-old son will have of him.

4 p.m.
John’s phone rings. It’s the governor’s office, calling to say that unless the Supreme Court issues a official stay, the execution will proceed as scheduled at 6 p.m. Our worry at the state’s action is tempered by continued hope that the Supreme Court is planning to stay Ron’s execution. It feels as if the Court couldn’t possibly be taking so long unless it’s going to be a good decision for us.

4:20 p.m.
Visiting hours are over and Ron is taken back to the execution area, where he remains with his spiritual adviser and some corrections officers. Christine and Spencer plan to wait in the parking lot until the execution starts at 6 or they get word it’s been stayed.

About 5 p.m.
The governor’s office calls again. Clemency has been denied. John places a call to Holman and is able to tell Ron personally. Ron is not too worried — he, too, has a good feeling about the Supreme Court. No member of Ron's team will leave the office again until the evening is over.

About 5:45 p.m.
The Supreme Court issues a temporary stay to allow additional time to consider our application for a permanent stay and petition for certiorari. Even though this technically means nothing, we’re all sure it means something. We’re thrilled.

Even so, anticipating the possibility of a 4-4 tie that would mean the stay was denied, John lodges with the Supreme Court a motion for a “courtesy fifth.” The “courtesy fifth” is a Supreme Court tradition, unevenly applied, for use in cases like this one where there are enough votes to grant a review of the case but not the five votes required for a stay. Chief Justice John Roberts extended a “courtesy fifth” in a case last month, and in the event of a 4-4 tie we hope he or another justice can be persuaded to do the same for Ron.

About 7:30 p.m.
Word comes from the Supreme Court that the stay has been denied. Four of the justices voted to grant it, meaning Ron was just one vote short of the majority he needed to spare his life, so the clerk files John’s motion requesting the “courtesy fifth.”

The death warrant expires at midnight. We rack our brains for other ways to persuade someone to stop the execution. The Catholics in the room engage in a brief and animated discussion of what kind of prayer is even more of a Hail Mary than the Hail Mary, which turns into a debate about the name of the Rosary where you say all 15 Mysteries. The office again settles into an uneasy silence as people gaze at their smartphones and will it to be midnight.

About 8:45 p.m.
No one has eaten, but no one wants to think about food. The husband of another lawyer on Ron’s team brings Chick Fil-A, which we eat absentmindedly. No one knows what to say and no one can stand the silence. Time is passing very slowly.

About 9 p.m.
The clerk calls. The justices have denied our motion to reconsider and the temporary stay is again dissolved. The state notifies us that the execution will take place at 9:45 PM. There is nothing more we can do, so we wait.

9:01 p.m.
Incredibly, the phone rings, and it is Ron. Somehow, he was able to make a call. John tells him what has happened, and tells him our last motion for a stay won’t be granted. Ron, gracious to the end, thanks us for fighting the good fight and giving him more years than he thought he’d get after the Supreme Court declined to review his case in 2013. He asks John to tell everyone in the office that he loves us. When John reports this, several people start to cry.

10:20 p.m.
Together with the press witnesses, Spencer and Christine are escorted to the execution area and seated. Ron is already strapped to the gurney. They watch the chaplain pray with Ron and leave. Ron continues to pray, moving his lips silently. At least one member of the victim’s family attended, the corrections department said, but was seated in a separate room.

About 10:30 p.m.
The first dose of the sedative midazolam is given, and, as Spencer and Christine later reported to the team, within two minutes, Ron is coughing and heaving. They believe he is clearly conscious and obviously suffering. Inside the witness room, Spencer is beside himself. Despite past requests , there is no phone line in the witness room and cell phones are not permitted. Ron’s advocates and friends have no way of knowing exactly what has happened and no way of notifying a court and asking that the execution be halted. Ron continues to struggle through two consciousness checks, moving his head, hands, and arms, coughing, and trying to speak. Finally, despite the fact that Ron still appears to be conscious, the second and third drugs — both of which courts have acknowledged would be torturous if given to a person who was not anesthetized — are administered. Spencer and Christine reach this conclusion because Ron stops moving.

11:04 p.m.
Via Twitter from the media witnesses, it quickly emerges that Ron’s execution did not go as expected. One person in our office throws up at hearing this news. We are all sick over it. And there is nothing to do but go home.

The day is over.

The world is a little less good than we hoped it was.

Leah A. Nelson is a paralegal and writer who lives in Montgomery, Ala.