Getting Away With Murder

The document is more than 85 years old, handwritten and hard to read. Many death certificates from this period are ambiguous or euphemistic: the victim died from a “broken neck.” Not this one. The cause of death, recorded in loopy cursive, is “hanged by mob.”

Robert Appleberry, 22 and known as Hollie, was murdered in 1930 in the tiny Mississippi town of Wahalak, in a time and place where lynchings were so common the county was called “Bloody Kemper.” Appleberry was one of three black men lynched in Kemper County that day. When law student Kellie Ware-Seabron got her hands on his death certificate this fall, it was “equal parts gratifying and horrifying,” she said. She had set out to research the other two victims — dragged from sheriffs’ cars and hung after being accused of robbing a white couple — and inadvertently discovered a third.

During the reign of racial terror that lasted from the end of Reconstruction through the 1950s, thousands of African-Americans were killed by mobs, mutilated, kidnapped from jails and hung from trees. Historians have tried to catalogue these deaths — a recent report by the Equal Justice Initiative includes a list of 4,075 names — but Appleberry does not appear on any of the lists. His name might have been lost to history but for the Civil Rights and Restorative Justice Project, run out of Northeastern University’s law school.

The project aims to create an archive of documents, photographs, news clippings, and interviews about as many of these deaths as possible — particularly the overlooked and unnamed among them. The idea is to create a record of each murder, a trove for historians and researchers and family members to plumb in years to come. 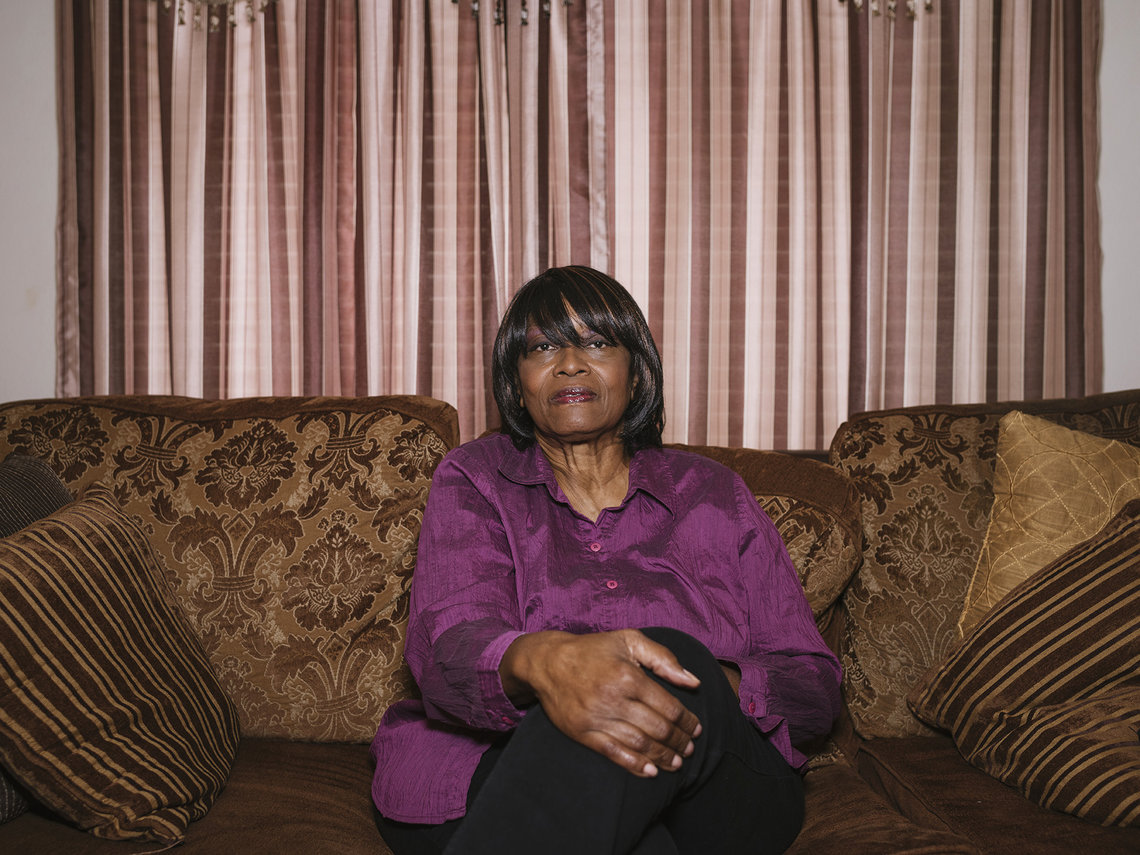 Carolyn Jordan-Daniels at her home in Highland, Calif. Her great-uncle, Nelson Nash, was murdered by a mob in Louisiana after being wrongly arrested.

“Restoring these stories to history is a piece of restorative justice,” says Rose Zoltek-Jick, the program’s associate director. “The work of the archive is to prevent closure, to lift them up out of the silence.”

Law students who enroll in the project’s semester-long “clinic” are each assigned a dossier of death: a list of a half-dozen murdered African-Americans, some with little more to go on than a newspaper headline reading “unknown Negro found in swamp.” In 11 weeks, the students learn as much as they can about the victims’ lives and deaths. They unearth news reports, NAACP files, birth, death, and marriage certificates. They submit records requests to the FBI and to local courthouses. They locate witnesses and relatives.

Many of these deaths have never before been investigated, let alone tried. Sometimes documents listing the perpetrators as “persons unknown” coexist in Northeastern’s archive side-by-side with striking black and white photographs of the murderers posing with the lynched man’s body. In some instances, the perpetrators were tried in pro forma legal proceedings in which all-white juries acquitted them in a matter of minutes.

The project focuses on the years 1930 to 1970 — “not all that distant,” yet fast fading from view, says Margaret Burnham, a law professor at Northeastern and the founder and director of the project. “The persons who have knowledge about these events — the family members, the witnesses — are aging. The documents are disappearing. And if we don’t do this now, this piece of our history will be lost to us and to future generations.”

The project began in 2007, the same year that Congress passed the Emmett Till Act, named for the 14-year-old boy lynched in Mississippi in 1955; his mother’s decision to invite the national media to the open-casket funeral of her mutilated son catapulted the reality of racial violence into the consciousness of white Northerners. The law directs the Justice Department to re-investigate unsolved civil rights–era cases. Initially, Burnham envisioned the archive as a resource for the lawyers and family members working on these cases, and to provide support and fodder for reparations initiatives that had sprung up around the country during the previous decade.

One of the project’s first major undertakings was a 2008 civil suit against Franklin County, Miss.; the Justice Department had, the previous year, successfully prosecuted a former Klansman in the 1964 kidnapping, torture, and murder of two black teenagers who disappeared while hitchhiking in the tiny town of Meadville. Evidence from that case suggested the sheriff knew enough of the Klansmen’s plans to have prevented the murders but did nothing, and did not investigate it after the fact. In support of the case, Northeastern students interviewed surviving witnesses, analyzed FBI files, and gathered other evidence.

In 2010, Franklin County agreed to a settlement for the victims’ families. The amount was confidential, but Burnham says the attorneys’ portion was enough to ramp up the project, which had emerged as a powerful teaching tool for her law students. With this new financial footing, they decided to move away from legal actions in favor of investigating the many hundreds of murders that had never been studied. Most lacked enough evidence for court, but Burnham felt they deserved the same dogged research too often reserved for prosecutions.

“We’re not looking for a legal solution, but we are trying to understand something about how law operates — what the absence of law creates, what impunity looks like,” says Zoltek-Jick.

What’s more, federal and state prosecutors had, over the years, investigated a few dozen Jim Crow–era cold cases as new evidence emerged (the Franklin County case was one of these), but the Till Act revealed the limits of a large-scale legal solution. Almost a decade and millions of dollars after the passage of the act, the Department of Justice and the FBI have investigated more than 100 cases but successfully prosecuted exactly one, an Alabama state trooper who shot and killed a protester in 1965. In 2010, he pleaded guilty to manslaughter and served six months in prison.

The project’s title is a nod to the ways in which the investigations can nevertheless provide some measure of justice, if not in a legal sense, then in a social and emotional one. For some families, just learning that someone has taken an interest in their relative’s stories provides some healing. When Carolyn Jordan-Daniels got a message on the website Ancestry.com from law student Alicia Cook, she was so excited, she says, she screamed. 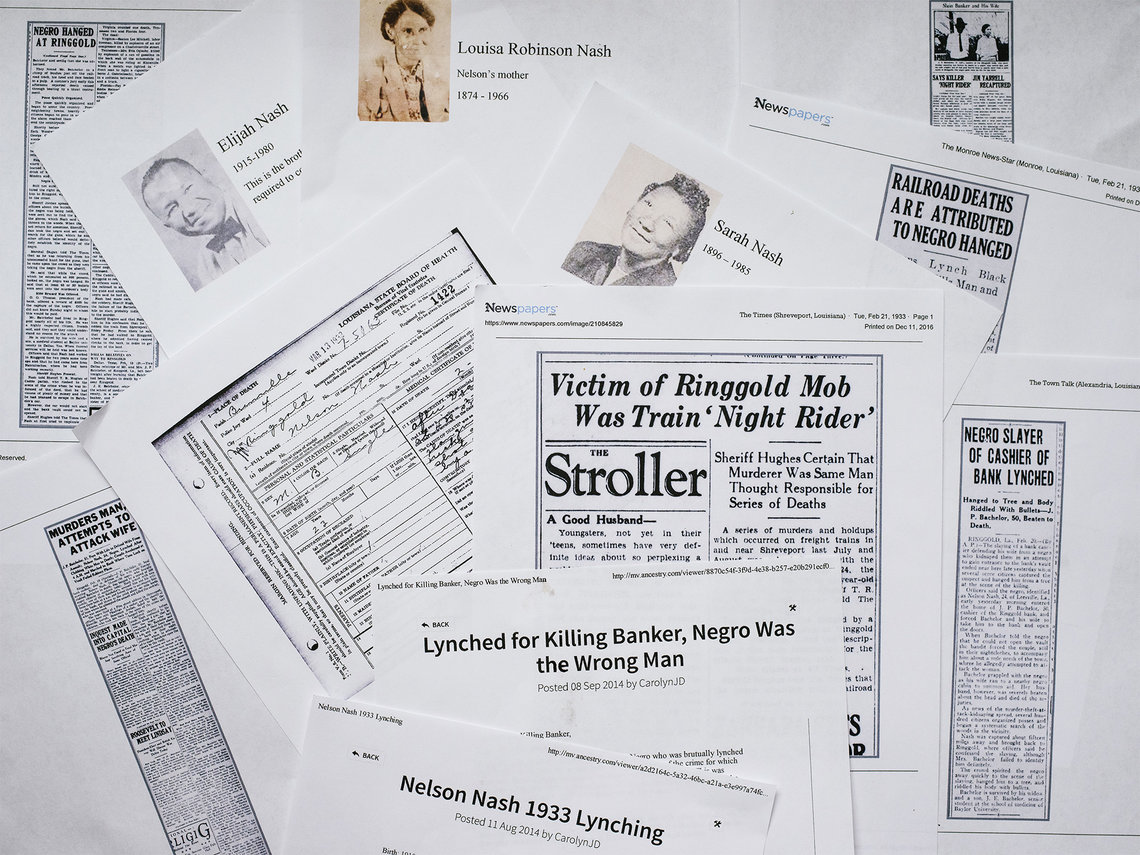 An array of news articles about the death of Nelson Nash printed by Carolyn Jordan-Daniels.

In 1933 in a small Louisiana town, Jordan-Daniels’s great-uncle, Nelson Nash, was arrested and accused — wrongly, it later turned out — of killing a white man and raping his wife. At a recent family reunion, Jordan-Daniels says she and several of her cousins compared notes and research they had done on Nash’s death. “It got into our spirits a little bit,” she says. “How did they get their hands on him? Did they drag him from the jail? Why did they let him out of the jail? There’s no files, there’s no records, nobody knows.”

Nash was hung, his tongue cut off, his body riddled with bullets. The mob had tried to burn him at the stake, but the surrounding brush was too damp. “Hanged by the mob and gun shot wounds by a mob of about 1000 people,” his death certificate reads — though several news accounts from the period put the size of the mob at around 30 people. Cook, the law student, suspects the coroner purposely inflated the number to make it harder to pinpoint the perpetrators. She found conflicting accounts about whether the sheriff had helped to orchestrate the mob, or tipped them off. 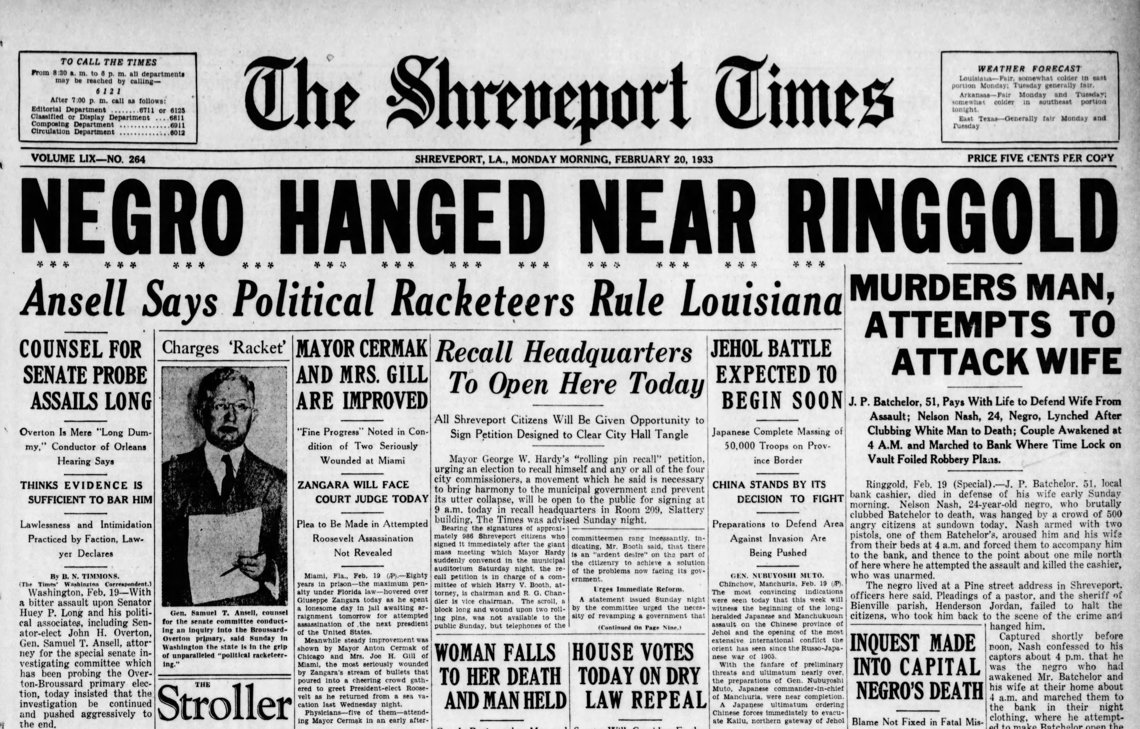 The Shreveport Times reported that Nelson Nash was killed by a mob following his arrest for the death of J.P. Batchelor. Nash was later found to be wrongfully accused of the murder.

“It can work on you, emotionally," said Jordan-Daniels. "As we talk about what we see on the death certificate, how he must have suffered. How he was probably begging for his life, and actually saying that he didn’t do it."

In 2009, law student Kaylie Simon began investigating the 1955 murder of John Earl Reese in Mayflower, Texas. The 15-year-old boy, dancing with his cousins in a cafe, was shot in the head by two white men. Angry about a town vote to spend money on repairs at an all-black school following Brown v. Board of Education, they were driving around the black part of town and shooting indiscriminately into buildings. Two of the boy’s cousins were also shot and wounded. Remarkably, given the time period, one of the men was convicted of murder, but was given a five-year suspended sentence and never served any time. The other was indicted but the indictment was later dismissed. (A local prosecutor described the murder as “a case of two irresponsible boys attempting to have some fun by scaring Niggers.”) Simon worked with the town to dedicate a civil rights marker in Reese’s memory, and to re-name the street where he grew up John Earl Reese Rd. The local library now has a binder with all of Simon’s research so members of the town can learn his story.

In the wake of publishing Simon’s findings on the Northeastern project’s website, Burnham got a remarkable email. “I am the daughter of Joe Simpson, who was responsible together with Dean Ross for the death of John Earl Reese,” wrote Sandra Simpson-Kraft. She had grown up knowing her father had been in some sort of trouble, but her family refused to discuss it. She learned of his role in Reese’s death from the project’s website. “I cannot express the depth of my shame at his role in these events,” she wrote. At the same time, she notes, “my father was an accident waiting to happen. He was born into a violent family whose normative response was violence.” He was alcoholic and bi-polar, and eventually committed suicide, estranged from his family. “This does not excuse his behavior,” Simpson-Kraft said, “but as with most things in life nothing is ever truly one thing or another.”

In the 1930 Bloody Kemper murders, a white couple was robbed on a small rural highway of $42 and a ring. They said three black men were responsible. Bloodhounds led sheriffs to a house along the highway shared by two friends, William Lockett and Holly White. On this basis alone, they were quickly arrested. The money and ring were never recovered. A few news accounts mentioned a “third Negro,” but never by name. The Tragedy of Lynching, a 1933 book by white sociologist Arthur Raper, says of this man, “it is reported that some of the young white men around Wahalak found him…and disposed of him in their own way. On several occasions, it is said, white boys around Wahalak when drinking, have said: ‘Ah! that third nigger won’t never bother nobody no more.’”

This snippet set Ware-Seabron in search of the unnamed third victim. She began by searching for death certificates for black men murdered within a month of Lockett and White. She found one for a “Hollie Appleberry,” dated September 10th in Wahalak, the very same day, in the same tiny town where the other two men were killed. But given the similarity between Appleberry’s and White’s first names, was it possible these were duplicate death certificates for the same man?

But she then identified two separate entries on the Census: one for White, and one for a Robert Appleberry, whose age matched the man on the death certificate. She followed their Census entries backwards and constructed two separate family trees.

The “third Negro” now has a name, and a family: a widowed mother, three sisters, a brother, aunt, uncle, and grandfather. “In this day and age when everyone has shoeboxes of pictures taken of them, when you have a person who did not leave any type of footprint, it’s hard to envision them as being a whole person,” says Ware-Seabron. “if you can uncover that they were a brother, son, uncle — maybe even just saying that makes them real people.”