A Better Way to Treat Addiction in Jail

Medications are effective, but jails are still slow to provide them.

As downward spirals go, Mark’s was early and precipitous. He first tried alcohol at 13, began binge drinking shortly afterward, and graduated to pot, Percocet, then heroin. When he was 22, snorting drugs alone in a cheap motel room, he passed out on the floor, where he lay for hours in a position that cut off circulation to his right leg. It had to be amputated above the knee. While recovering in the hospital Mark had unfettered access to opiates, in severe pain but almost enjoying the little button on the morphine pump, he said. He went home with fistfuls of pills — Percocet, klonopin, morphine — and continued using until his mother finally called the police to report he was stealing from her.

For years Mark1 has been in and out of rehab and jail, each time returning home to the sick, panicky self-loathing it seemed only drugs could calm. Now, for the first time, he says, he’s receiving effective treatment for his addiction — in jail. Serving 12 months for the theft, he’s participating in the Rhode Island Department of Corrections’ medication-assisted treatment program, the newest and most far-reaching of a handful of such programs around the country.

The Rhode Island Department of Corrections made it a condition of our interviews with inmates that we withhold their last names.

Each day a nurse watches as Mark dissolves a film of the addiction medication Suboxone on his tongue. “Within 48 hours I felt like my old self, before I was even taking drugs,” he says. “It makes me feel comfortable in my own skin.” 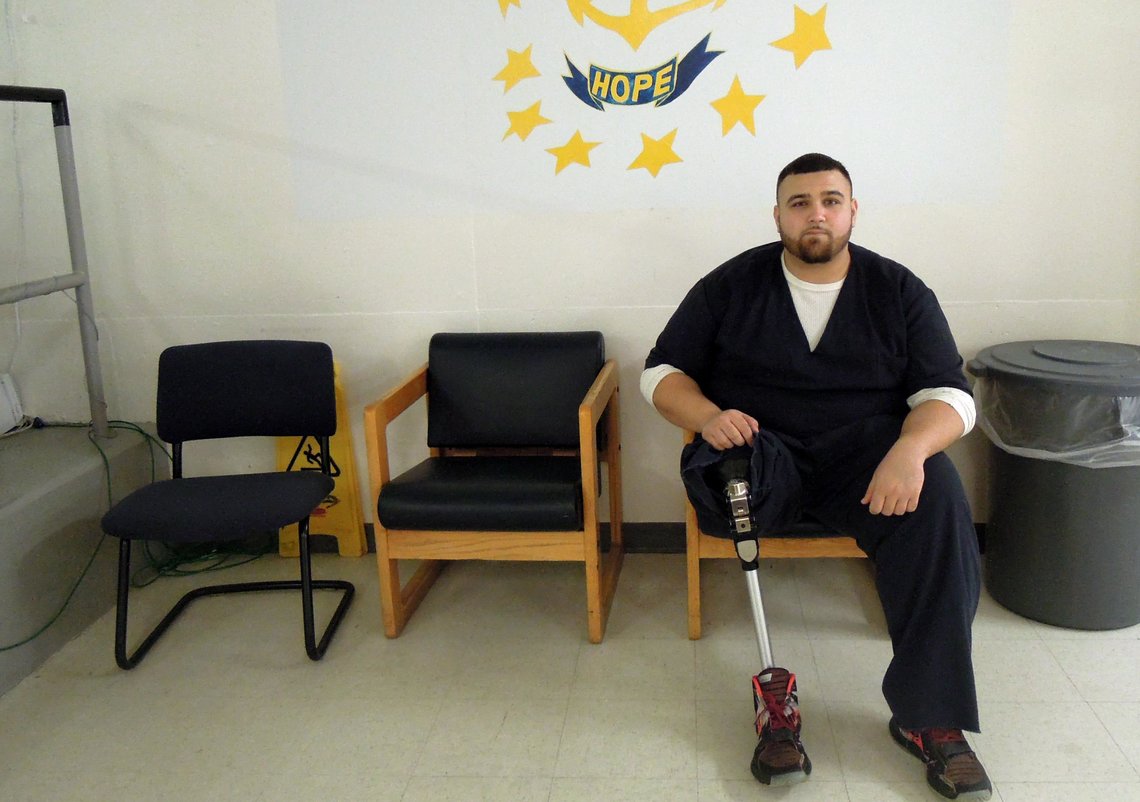 Mark is participating in the Rhode Island Department of Corrections medication-assisted treatment program. He lost his leg as a result of a drug overdose.

Beth Schwartzappel for The Marshall Project

Because Rhode Island’s is a unified system — all the state’s prisons and county jails are located on a single campus — it is the only state where almost every opiate-addicted inmate, whether in prison or jail, has access to a range of medications to treat their drug addiction. “Rhode Island has really embraced the opiate epidemic as an opportunity to improve services and treatment,” says Dr. Jennifer Clarke, the medical director for the state corrections department. “Locking people up is not a treatment.”

Studies show that providing them with methadone or Suboxone in the weeks before release, and connecting them with providers in the community who can continue to prescribe the medication when they leave, increases the odds they will stay in treatment and reduces drug use and risk of death when they get home. Experts say long-term drug use can alter the physiology of the brain, such that users have difficulty feeling “normal” without medication.

Half to two-thirds of inmates abuse, or are addicted to drugs, and prisons and jails have long provided a wide range of substance abuse treatment, from 12-step programs to cognitive behavioral therapy, self-help groups, religious ministries — even Scientology. But medications are typically a bright line.

Studies are unequivocal that treatment with medications like methadone or Suboxone reduces drug use, overdose, death, crime, and risky behavior like sharing needles. Yet of the 3,200 jails around the country, just 23 provide methadone or Suboxone maintenance therapy to inmates, according to data compiled for the federal Bureau of Justice Assistance. Of the 50 state prison systems, four do so.

Andrew Klein runs the Bureau of Justice Assistance’s support program for drug and alcohol treatment in prisons and jails. He says stigma and misunderstanding drive a lot of the decision making about medication in lockups. “Inmates are off drugs while in prison,” one correctional administrator wrote in response to a 2009 survey. “They don't need detox because they've been rehabilitated while in prison. It is assumed that they are no longer [drug] users.”

Methadone and Suboxone both work by activating the opiate receptors in the brain, and can, in large enough doses, make the user high. That causes many in law enforcement to question whether these treatments are “substituting” one addiction for another. It also means there is potential for abuse and for people to sell their medication to others — known as “diversion” — a major security concern inside prisons and jails. “Sheriffs say, ‘Suboxone! I spend all my time trying to keep it out of the institution, why should I bring it in?’ ” says Klein.

The exception is Vivitrol, an extended-release injection that blocks the brain’s opiate receptors so the user can’t get high. Vivitrol appeals to correctional administrators because it can’t be abused, so there is no black market for it. Since 2010, when the FDA approved it to treat opiate addiction, upwards of 150 jails and prisons have begun offering Vivitrol to inmates on their way out the door. But physicians like Clarke say Vivitrol should be one of a range of choices available to those with addiction. “The medication that works best is the medication someone will take,” she says — and almost all of her patients, given the option, choose methadone or Suboxone.

She and administrators in other jails with successful programs say it can be done safely.

The oldest and largest of these is at New York City’s Riker’s Island. The program began in 1987 and now treats upwards of 2,000 people a year with methadone. Ross MacDonald, the jail’s medical director, says that a nurse watches each patient swallow his dose, to reduce the chance that he can smuggle it back to the cellblocks — a labor-intensive but workable system. The risk of diversion, “when minimized, pales in comparison to the increased risk of overdose death” after release, he says. “These are decisions that should be made by experts in medical treatment, not by experts in security.”

One of the surprises in Rhode Island, Clarke says, is that the treatment program has itself improved security. As doctors enroll an increasing number of people, Clarke says she hears from patients that the black market for drugs behind the walls is waning. One such patient, whom the authorities asked The Marshall Project not to identify by name, has been in and out of the Rhode Island system for a decade before getting on methadone during his current stay. With money in your commissary, this patient says, it’s easy to get drugs like fentanyl in jail. But during his current stay, “it’s almost been absent. Almost every opiate addict I know, no one talks about it. It’s weird. Everybody’s so grateful they’re on the Suboxone and methadone, I don’t hear much about heroin or pills right now.

“I’ve come in here before and all I wanted to do was go out and use,” he said. “I didn’t think about getting my life back on track. My number one concern was, ‘how do I get to feel better when I’m out of here?’ This is the first time I’ve ever been here where I’ve been mentally and physically at peace.”