A case that tests corporate liability for chaos. 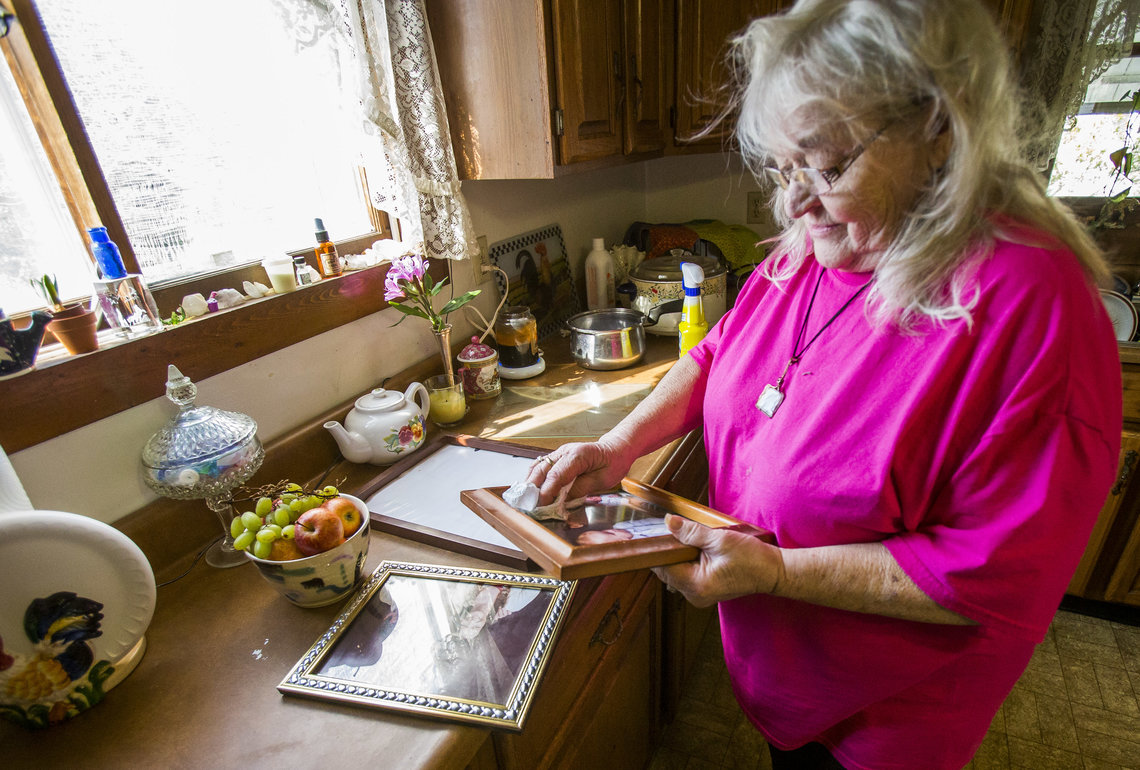 Alma Glisson looks at photos of her son, Nicholas Glisson, who died when at the Plainfield Correctional Facility in Plainfield, Ind.

Robert Franklin/South Bend Tribune
Listen to "Case in Point" on The Takeaway.

The story of Nicholas Glisson’s premature death in an Indiana prison begins with just two pills, two Oxycodone painkillers. Glisson had the pills because he was a survivor of laryngeal cancer, which had required the removal of his larynx and part of his pharynx. He needed a voice prosthesis to speak and a tracheostomy tube to breathe. He wore a neck brace because of cervical spine damage he had suffered from years as a construction worker, leaving him unable to hold his head up by himself. He had the pills because he was in constant pain.

Despite all this Glisson generally took good care of himself, living on his own, helping and being helped by his mother, both of them making do. And then one day in July, 2007, while he was living with his grandmother, he offered to give two pills to someone he thought was a friend. Only this “friend,” who had asked for the pills, evidently was a “confidential informant” working for the police. The friend turned in Glisson and the ailing man, 47 at the time, was arrested for “dealing in a controlled substance.”

That’s the way Glisson’s mother, Alma, describes what happened to her son. It’s also the way the 7th U.S. Circuit Court of Appeals described what happened to Glisson in a ruling last month that resuscitated Alma Glisson’s damages case against Correctional Medical Services, Inc., known to the world as “Corizon.” Why was such a disabled man treated so severely by prosecutors and a judge based on the transfer of two pills? Because Glisson was considered an habitual drug offender under Indiana law. Why? Because he had offered to hand over the two pills within 1,000 feet of a park, Clear Creek Park, and because Glisson had twice been charged with operating a vehicle while intoxicated, says David Jordan, the local attorney who represented Glisson at the end of his case.

Glisson’s medical condition worsened in the years after his arrest. In 2008, he had a tube placed in his stomach to help him get nutrition. He suffered from hyperthyroidism, a result of the radiation he had received for his cancer, which had returned in 2009. He suffered from depression. He drank a lot. Still, he was able to care for himself. In 2010, fearful of a decades-long prison stint, Glisson took a plea deal. Eight years and with good behavior he’d be out in four, attorney Jordan told me. Clearly Glisson’s trial judge understood what was at stake in sending a man in Glisson’s condition to prison. “This patient is severely disabled, and I do not feel that he would survive if he was incarcerated,” Glisson’s doctor told the judge on the eve of sentencing.

At first Glisson was told to report to the Wayne County jail. Glisson’s family tried to prepare Nicholas — and his guards — for his imprisonment. They brought to the jail supplies they knew he would need; his neck brace, the suction machine, a light and mirror he used for his trach tube. Soon, though, Glisson was transferred from jail to prison, to the Plainfield Correctional Facility and placed under Corizon’s care. Evidently not all of those supplies survived the transfer. Nor, ultimately, did Glisson. Five weeks after he went to prison he was dead from “starvation, acute renal failure, and associated conditions.”

Prison officials said the cause of death was natural, from complications of his cancer. Corizon contends that Glisson’s prison doctors and nurses did the best they could with a very ill inmate who did not respond to treatment. The Glisson family said otherwise: Nicholas died because of the deplorable care he had received in confinement, they allege. Years later, shaped by a series of court rulings, that argument has been refined into a question that could make this case nationally significant by broadening the private prison industry’s scope of liability when inmates die in custody: was Corizon’s bureaucracy itself responsible for expediting Glisson’s death? That’s essentially the question jurors in the case will get to answer now thanks to that 7th Circuit ruling.

It is unusual for any inmate’s medical case against prison doctors and staff to get to a jury because of the broad immunity rules that govern claims of abuse and neglect. The law is structured to protect prison officials and private operators except in extraordinary instances of “deliberate indifference” toward prisoners. The fact that Alma Glisson’s case is still alive is particularly unusual because there was no “smoking gun” moment of “deliberate indifference” in Glisson’s care. It was instead a series of missed opportunities and poor communication and an unwillingness to adopt recommended management procedures that did in Glisson. As the 7th Circuit put it: “A jury could find that Corizon’s decision not to enact centralized treatment protocols for chronically ill inmates led directly” to Glisson’s death.

In Glisson’s case, the record shows, no manager came up with a medical treatment plan, and so no nurse or doctor ever put Glisson’s daily status in its proper medical context. For the first 24 days after he arrived at Plainfield, for example, “no Corizon provider even reviewed his medical history,” a federal appeals judge later noted. We know that despite Glisson’s disabilities he was placed in the general population at Plainfield after an initial medical evaluation. One Corizon doctor asked for Glisson’s records on September 10, 2010. It took 17 days for another Corizon doctor to finally ask for them again and to receive them. Alarmed at Glisson’s weight loss, that doctor ordered some Ensure (the liquid nutritional supplement) for Glisson but then didn’t weigh the inmate for future reference. 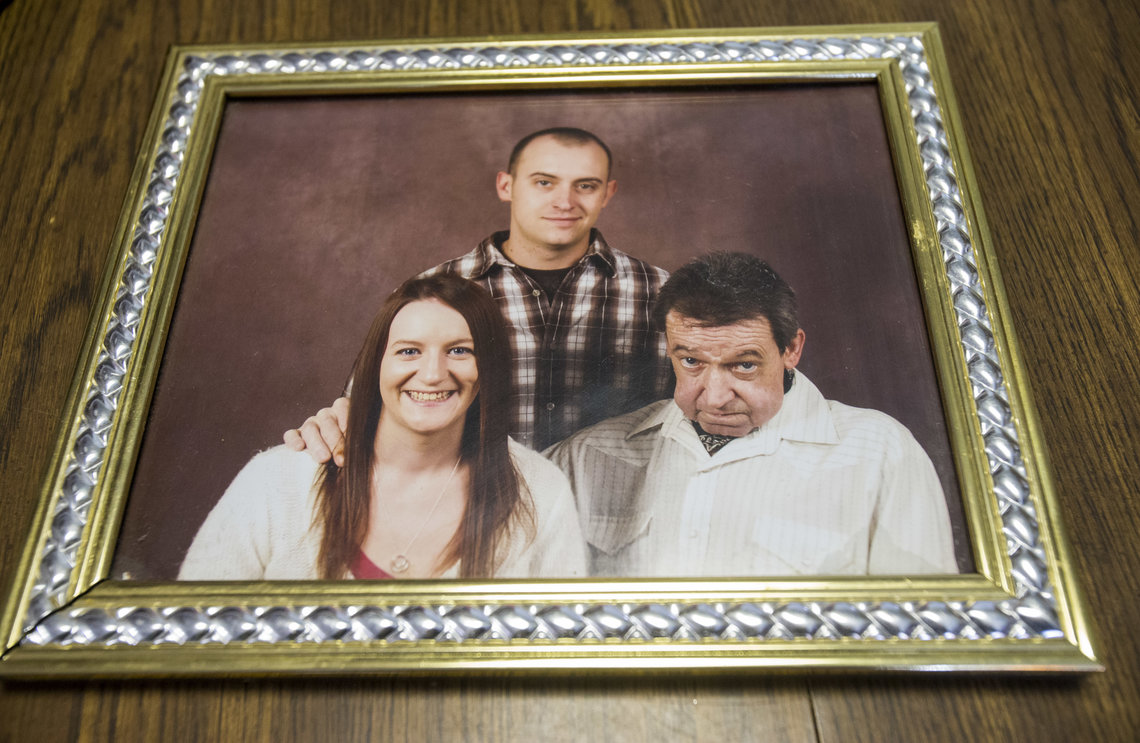 A family photo shows Nicholas Glisson, right, with his grown children, before he was sentenced to prison.

Meanwhile, one Corizon doctor began to worry about Glisson’s mental health, wondering if he didn’t belong in a psychiatric unit of another prison. But that doctor didn’t know that another Corizon doctor had already performed a mental health evaluation on Glisson (who obviously was depressed or mentally ill). The one doctor refused to treat Glisson with psychotropic medication even though the other doctor already had him on such medicine. Moreover, while there was evidence of abnormal renal function in blood work taken on September 9th no Corizon employee looked at the results until September 27th.

The record makes it clear that as Glisson’s condition worsened Corizon staff grew more worried. On September 29th they sent him to a local hospital, where he was treated until October 7th. When he returned to prison, one of his doctors ordered him fed by a tube, which evidently did not occur even as other Corizon employees noted that Glisson wasn’t eating his food. Three days later he was dead. “The Corizon providers never took any steps to integrate the growing body of evidence of Glisson’s malnutrition with his overall mental and physical health,” a judge concluded.

After Nicholas Glisson died, Alma Glisson sued state prison officials, Corizon, and several of the doctors and nurses who were responsible for her son’s care. She alleged that her son’s medical condition, while obviously serious, was manageable and, indeed, had been properly managed while he was free. She accused Corizon’s prison staff of negligence, of acting with “deliberate indifference” to his medical needs, and she also charged state prison officials with failing to meet their obligations to Nicholas Glisson by ensuring that Corizon treated him appropriately.

The defendants, meanwhile, responded by telling the courts that no single person who ever cared for Glisson ever mistreated him or failed to provide the medical care required by law. The doctors and nurses made specific orders and took considered action designed to improve his condition, Corizon’s attorneys asserted, and could not be faulted for failing to keep alive a very ill man. There was no “willful” effort to avoid providing Glisson with medical treatment, Corizon argued, and without such malicious intent there can be no liability.

Alma Glisson lost her case, or most of it, in 2014. A trial judge ruled that prison officials, and Corizon employees, were in this instance immune from liability because the conduct of the individual caregivers never rose to that “deliberate indifference” level required to sustain a claim. It was a traditional judicial response to a case like this. And, at first, the 7th Circuit went along. A panel of its judges in 2016 agreed by a vote of 2-1 that the case should be dismissed. But then the full 7th Circuit agreed to hear the case anew and, this time, the result was different.

In the end it was a “gap” argument that swayed the federal appeals judges. Glisson’s attorneys argued that Corizon “had a deliberate policy not to require any kind of formal coordination of medical care” that might have saved her son’s life. They didn’t argue that Corizon inadvertently failed to coordinate a treatment plan, or that it had no idea that such a coordination plan was required by the state (it was). They argued instead that Corizon made a conscious choice as a company not to rely on such a plan to provide adequate care for prisoners like Glisson even after corporate officials knew or should have known what could happen to inmates whose medical care was provided in a chaotic, haphazard fashion.

That resonated with a majority on the 7th Circuit. “[T]his case well illustrates why an organization might be liable even if its individual agents are not,” wrote 7th U.S. Circuit Court of Appeals Judge Diane Wood. “Without the full picture, each person might think that her decisions were an appropriate response to a problem; her failure to situate the care within a broader context could be at worst negligent, or even grossly negligent, but not deliberately indifferent. But if institutional policies are themselves deliberately indifferent to the quality of care provided, institutional liability is possible.”

That argument incensed the 7th Circuit dissenters. “The court rests its decision on the conceptual idea that a gap in official policy can sometimes be treated as an actual policy” for purposes of liability, 7th U.S. Circuit Court of Appeals Judge Diane Sykes wrote. If jurors agree with the majority, and award damages to Alma Glisson and her family, you can bet that those private prison health care operators who haven’t done so already will be more inclined to adopt managed care plans of the type that might have saved Nicholas Glisson.

An earlier version of this story used the incorrect first name of a 7th U.S. Circuit Court of Appeals judge involved in the case. It is Judge Diane Wood, not Kimba Wood.