Is There a Constitutional Right to Cash in on the Poor?

One Arkansas county takes on a private probation company.

They elect local judges in Craighead County, Arkansas, and two men decided two years ago to run for the bench there with a clear mission statement: if elected they would rein in a private probation company called The Justice Network and the local judge and prosecutor they said had countenanced its work. The company, they claimed during their aggressive campaign, made its money by ensuring that the citizens of the county consigned to probation for petty crimes were trapped in a “debtors’ prison” system that forced them to pay beyond their means or face jail.

The two men, David Boling and Tommy Fowler, won their elections in March 2016. They discovered on taking office that their campaign claims, if anything, were understated. There were 50,000 outstanding warrants, covering more than 8,000 people, in the misdemeanor court there; nearly one outstanding warrant for every two people in the county. Judge Boling later described what those figures looked like in his courtroom; of the 34 defendants who came before him one day in August 2016 only six were accused of crimes; the others all had run afoul of the The Justice Network.

The two new judges immediately made good on their campaign promises. They moved to end the county’s relationship with The Justice Network and they initiated an “Amnesty Day” program in which they met with men and women on probation to discuss payment options. In some cases, some of the fees that were owed were waived, freeing up those caught in endless cycles of debt and fear of imprisonment.

A story that illustrates how local communities, especially in the South, are fighting back against predatory private probation practices, right? Sure. A story with a happy ending, right? Not yet. This past June, The Justice Network went to federal court in Arkansas and sued the two judges, the county, and the cities within it. The amnesty program, the company alleges, violates its civil rights under the Constitution because it interferes with the contractual relationship the company had with the indigent probationers of the county. The judges, the company claims, caused it to suffer economic loss by waiving those onerous fees, and caused it to lose its “property” in the form of income from those caught in its web of fees and fines. 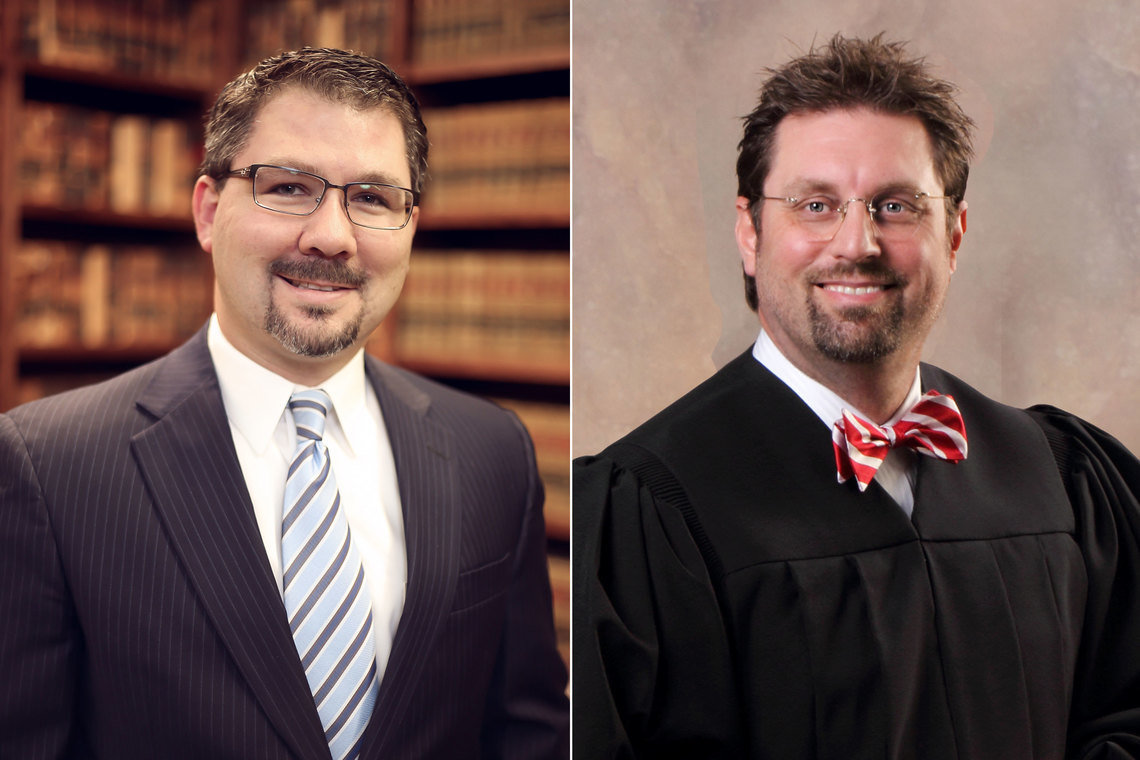 Judge David Boling, left, and Judge Tommy Fowler ran for judicial office as reformers who would alter the relationship between the the citizens of Craighead County, Arkansas and a private probation company called The Justice Network. They did, and got sued for it by the company.

The concept of debtors’ prisons goes back into antiquity, back to the days of slavery and servitude. The more modern version came to us, like so much of our common law, from England. The notion that you could be imprisoned for failure to pay a debt was banned in America under federal law in 1833 but the prohibition did little to stop the practice under state law or local rules. In 1983, in Bearden v. Georgia, the U.S. Supreme Court took a step toward limiting the practice outright when it ruled that a sentencing judge could not revoke a person’s probation and send that person to the clink for failing to pay a fine so long as that failure was not deemed “willful.” But the justices left it to lower court judges to determine how that standard should be applied. Here’s a Marshall Project primer on the history of debtors’ prisons.

Most Americans probably thought debtors’ prisons had gone the way of hanging, but in truth they never really went away, in large part because of the economics of criminal justice — as we saw with predatory policing and courts in Ferguson, Missouri — and the rise of private probation companies. In over one thousand counties across the country, underfunded and overworked public officials have been willing to farm out their parole and probation work to private firms. A few years ago Human Rights Watch reported on the phenomenon, calling it a self-perpetuating “offender-funded” system marked by little public oversight or corporate accountability.

Here’s how the system generally works. To reduce public expenses on probation enforcement, local officials outsource the work to private probation companies. The companies have a monopoly; there is no “public option,” you might say. When a resident gets into a little trouble with the law — say a speeding ticket — the judge orders probation and a fine, and the company takes over. The defendant signs what amounts to a one-sided contract. If that original fine isn’t paid, the contract allows the company to impose new fees and fines using the threat of jail as a cudgel to force payment.

That’s essentially what happened in Craighead County, according to court documents and exhibits in the pending lawsuit. From 1997 until earlier this year The Justice Network had an exclusive deal, a very profitable one. The company, based in Tennessee, says it employed 12 people to handle the crush of business — millions of dollars in revenue over the years. The company says it charged defendants a $35 monthly fee for “probation services” and a $15 monthly fee for “the supervision of public service work.” In 2011, local media reported, the company collected $556,548 in fees. The next year it was even higher. It’s that money The Justice Network says it has a constitutional right to be repaid.

To understand how the federal courts are likely to react, it’s important to get a better sense of what the company did and how its policies affected the lives of people in Craighead County. The Lawyers’ Committee for Civil Rights Under Law, a civil rights organization, has filed an amicus brief in the pending lawsuit. In it, lawyers portray a county virtually under siege by The Justice Network. If defendants didn’t pay on time, for good reason or not, the company sought to have them arrested and hauled back into court, where a new order of restitution would be issued and additional fines would be levied. The additional fines would make it even less likely that a probationer would be able to pay the amount owed.

A fine totalling a few hundred dollars could morph over time into far more. When the two reform-minded judges took office they discovered hundreds of residents of the county whose debt had grown to more than $10,000, an amount these defendants had no hope of repaying, and an amount orders of magnitude greater than the fines set forth by statute. In some ways, the system was perverse. A defendant would get docked for failing to make a required meeting or other appointment because the defendant was at work trying to earn money to pay a fine that would only get higher because of the missed appointment.

Eventually these stories became too frequent to be ignored. Local journalists like Keith Inman of the Jonesboro Sun began to report on employees trying to juggle the demands of their jobs and the requirements imposed by the company. Pretty soon local clergy chimed in to protest against the conditions imposed on their flocks. Next the house editorials started appearing. “Justice Network an Oxymoron,” was the headline of one particularly poignant screed calling for reform.

What Judges Boling and Fowler did upon taking office seems reasonable enough given their campaign promises. They dismissed some of the cases against the probationers, allowed some defendants to negotiate better terms, and essentially eased The Justice Network out of probation orders. There is no doubt that these actions cost the company money it otherwise would have squeezed out of those defendants. The essential question raised by the complaint is this: Does a company have a constitutional right to contracts that judges find violate public policy or the Constitution itself? And, if so, can a company sue for money damages from those officials for whatever profits it lost from losing the right to enforce those contracts?

When The Justice Network filed suit in June it argued that Craighead County, the cities and judges all illegally interfered with the contracts the company had with probationers. The argument relies on a broad interpretation of the “Contracts Clause” of the Constitution, which prohibits any state from passing “any law” that “impairs” the “obligation of contracts.” The judges and the other defendants in the case say the clause does not apply to them because the probation reform came via judicial acts and not state legislation. The company says those reforms were not judicial acts but administrative or legislative ones and that the two judges violated state law in helping the probationers.

The Justice Network also alleged in its federal complaint that the judges violated its rights under the “Takings Clause” of the Constitution by taking its “property” — those valuable contracts — without giving the company “just compensation” in return. The judges in their briefs responding to the complaint say they didn’t “take” anything from the company or otherwise profit from their reform efforts.

A federal trial judge now has before him a series of motions to dismiss the case before it ever gets close to trial. The judges say they have “absolute judicial immunity.” The county and the cities all say they are immune from civil liability because the judges were acting within the scope of their authority. All of these procedural protections would have to be overcome for the company to get its case to trial.

The story here isn’t that a private probation company engaged in predatory tactics. That’s become a commonplace feature of our justice system. The story is that a company that consigned many residents of Craighead County to hopelessness considers itself the victim.