“I’ve personally spent only one night in jail,” Frank Gehry confessed. “I didn’t like it very much.” Gehry, 88, who has been described as our greatest living architect (and, by an admiring pro-cannabis website, as a Very Important Pothead), said he got his only taste of incarceration when he was busted for possession many years ago. Last Friday in New Haven, that night behind bars was a kind of credential. An invited audience of architects and students, corrections officials and campaigners for criminal justice reform assembled at the Yale School of Architecture for the finale of Gehry’s semester-long “studio” on architecture and mass incarceration. A dozen students would present their projects — designs for a humane prison — to a jury consisting mostly of Friends of Frank.

This story was published in partnership with The New Yorker.

Gehry, best known for the billowing contours of his concert halls and museums, has never designed a prison, unless you count the episode of “The Simpsons” in which a Gehry concert hall is converted to a state prison when the town of Springfield discovers it hates classical music. He admitted to approaching the subject with some trepidation. 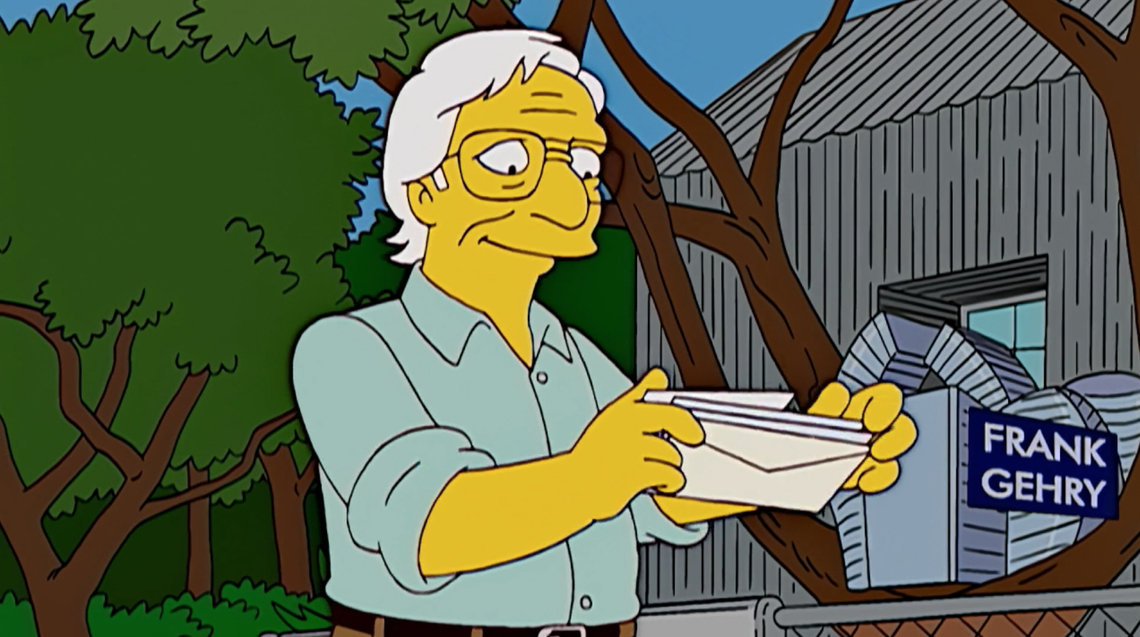 Frank Gehry as depicted in an episode of "The Simpsons."

“It’s heavy stuff, and I’m going to be 89, and it’s a little late,” Gehry told me during a lunch break. “I’m on the learning curve with everybody else.”

The billionaire philanthropist George Soros put up the money for the student workshop and a like-minded research and advocacy group called Impact Justice managed the logistics.

“We asked Frank, what would it mean to design a maximum security prison if you treated the corrections officers and the prisoners as the clients instead of the state bureaucracy,” said Christopher Stone, the outgoing president of Soros’s Open Society Foundation, who served as a juror. [OSF is a supporter of The Marshall Project.] “Frank kept saying, 'You don’t need me to design a prison. Nobody’s going to build a prison I design. We need to get a curriculum. We need to get architects thinking in different ways.'”

Yale, one of Gehry’s several academic affiliations, offered to host it. Connecticut, where Governor Dannel Malloy is a prison reform enthusiast, invited the class to tour the 104-year-old, 1,600-bed Cheshire Correctional Facility about 20 miles north of New Haven.

That site, students were told, was to be “re-imagined to house three hundred men convicted of serious, primarily violent offenses, serving sentences between five and 15 years... The speculative nature of the project, based on contemporary research and theory, requires you to examine closely the role of architecture as a means to provide safety, refuge, and facilitate personal transformation...’’

The premise of the assignment was that only the most dangerous offenders will need to be confined if American prison populations are reduced to the levels in other developed countries, and even those incarcerated for violent crimes should be equipped with the skills and social discipline to rejoin society.

During the semester, Gehry accompanied the class to prisons in Norway and Finland, where sentences for even the most heinous crimes rarely exceed 15 years and where prisons resemble college dormitories. Susan Burton, an activist who was in and out of jails as a young woman and now helps women released from prison find their feet, brought in parolees to educate the class about the grim reality of incarceration in America.

As students laid out their cardboard models for inspection and pinned up their master plans, it was clear most had ignored the part about “men convicted of serious, primarily violent offenses.” They presented prison as university campus, prison as health and wellness facility, prison as monastery, prison as communal apartment complex, prison as summer camp, prison as textile workshop (complete with a mulberry orchard to feed the silkworms). Virtually every student incorporated classrooms, open space and fresh air, spaces for family visits and therapy.

It fell to a formerly incarcerated juror, Dwayne Betts, to point out gently that neighbors might have security concerns about a prison where walls were decorative features and staying on site was more or less optional.

“You seem to be designing prisons for people who shouldn’t be in prison,” Betts, who served eight years for a teenage carjacking and emerged to become a lawyer and poet, told one student. 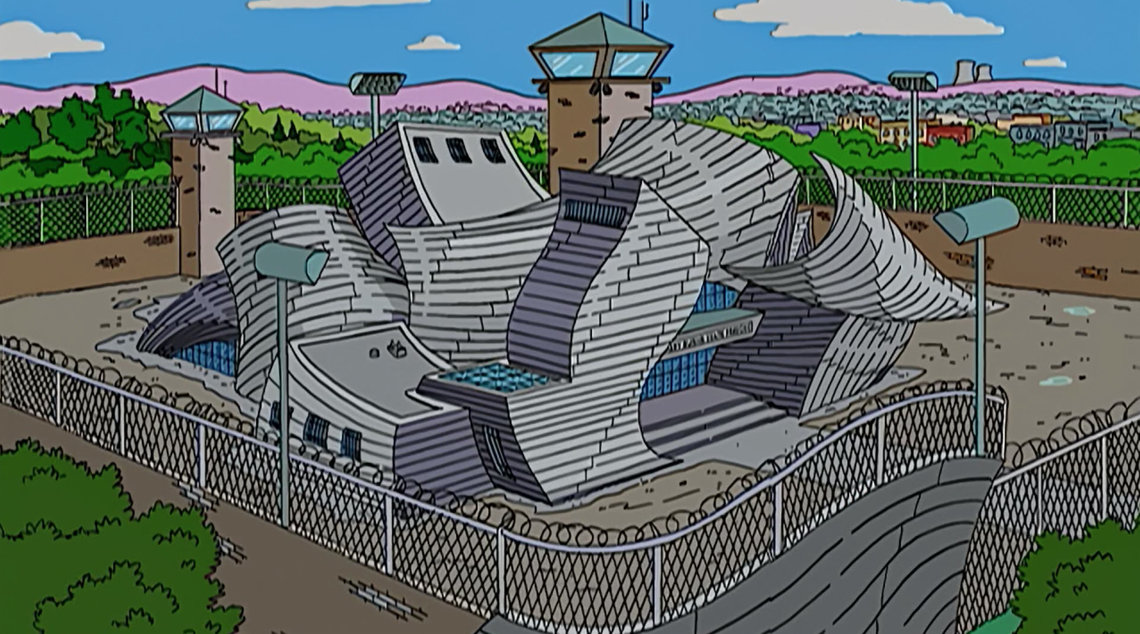 In an episode of "The Simpsons," a Frank Gehry-inspired concert house proves unpopular when the residents of Springfield discover they hate classical music. Mr. Burns buys the hall, and repurposes it as a prison.

But the point was not to design things that would actually be built. It was to establish that there are public interests and human values other than retribution that ought to be reflected in the system we euphemistically call "corrections." A society where prisons resemble cages and warehouses has lessons to learn from monasteries and college campuses.

“It’s a lot more theoretical,” Gehry said. “A studio in architecture is to unlock students’ feelings about form and space and time, and how that relates to people. A prison program happens to be more emotional for them,” he said. “And for me.”

One guest who watched the presentation with particular interest was Elizabeth Glazer, director of the New York City Mayor’s Office of Criminal Justice, which is overseeing the closure of the notorious Rikers Island complex and restoration of jails in several boroughs. Unlike prisons, jails are designed for short stays — the average at Rikers is 60 days — but many of the challenges are the same: preventing violence, easing access for families and lawyers, attending to mental health and addiction, and fitting the facilities into the neighborhoods around them. Glazer said she was struck that the student projects treated prison as not just a place for rehabilitation but as a “civic asset.”

“You look at the jails that we currently have and they don’t feel like a part of our urban landscape,”she said. “Either we’ve put them far away, like Rikers, or we’ve made them forbidding, like the Tombs.”

“Even though we may not be building those fabulous Gehry-like designs in our jails, the principles are something we need to pay very close attention to. We should try to normalize life inside as much as we can, because people are going to come back.”