Defrauded in Prison? Call This Guy

When Perry Fisher was sentenced to a California prison for second-degree murder in 1991, he knew he was going away for a very long time. Not surprisingly, keeping an eye on his finances wasn’t the first thing on his mind.

But at the time, Fisher believed he had nearly $43,000 to his name, money from an award he won in an earlier workers’ compensation lawsuit. Worried he would squander the cash on a drug habit, he says he entrusted most of the settlement to his attorney in the case. Once he was incarcerated, Fisher says, he would occasionally ask the lawyer, Burt Channing, to put some of the money into his commissary account. But Channing stopped responding.

When Fisher was released from prison at age 60 in 2016, he went looking for Channing — and the cash. The lawyer’s Los Angeles office had closed.

That’s where the story might have ended, but Fisher met Peter Borenstein, a young L.A. attorney who has carved out a niche helping ex-prisoners who believe they have been victims themselves. “People are gonna say I don’t deserve [the money] because of my crime,” Fisher said. “But I earned it before I got in trouble. And Mr. Channing and I, we had a contract.” 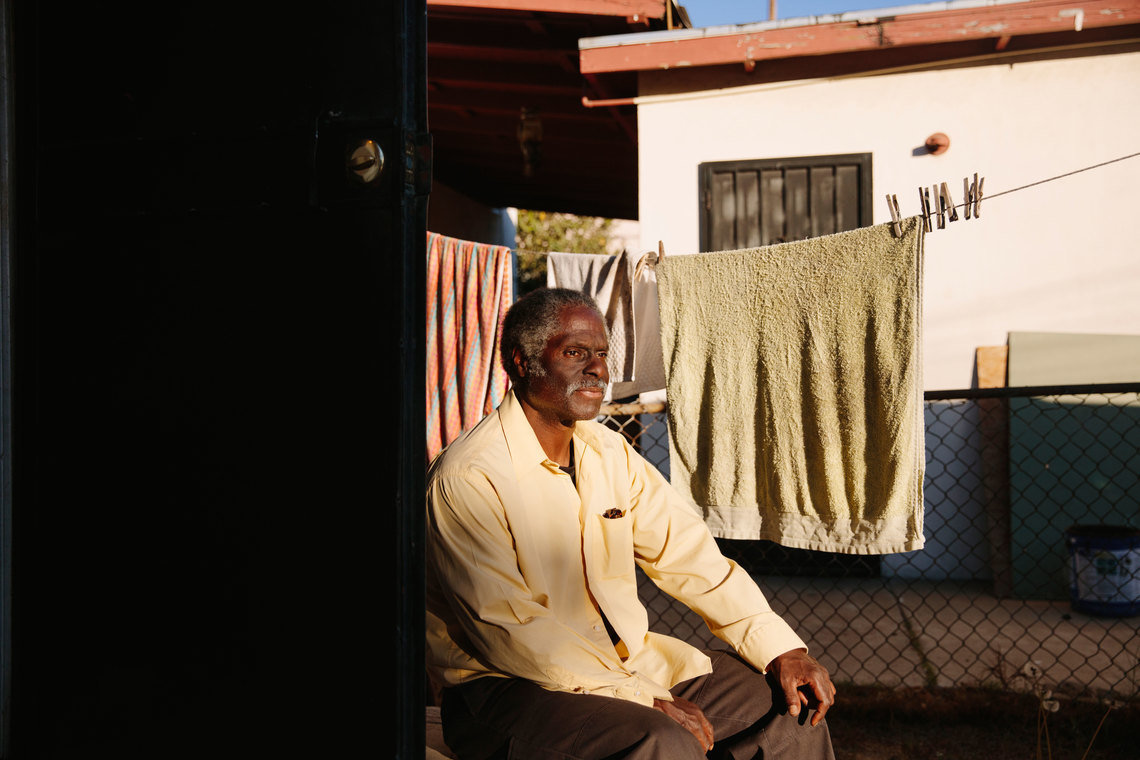 Perry Fisher, who lives at a home for ex-prisoners in Los Angeles, is trying to reclaim money that he says his former attorney stole from him while he was incarcerated.

Brinson+Banks for The Marshall Project

Borenstein took on Fisher’s case, eventually locating Channing in South Carolina, where he had retired. A lawyer for Channing says he wrote Fisher a check for the full amount a year or two after the 1984 settlement, and that the statute of limitations for filing a civil lawsuit has long since passed. “This was the first my client ever heard about it — when he was sued some 31 years later,” said Richard Klein, a lawyer for Channing. The case is ongoing.

Long-term inmates are especially vulnerable to being defrauded by family members, business associates, or others who believe that no one will care about the property and assets of convicted felons who might die in prison anyway, Borenstein said.

“Thirty years is a long time to hold onto someone else’s stuff,” he said. “People think, if the guy is in there forever, what’s the value in making sure that he’s not stolen from with impunity?”

But, he said, “You still have property rights in prison. You’re paying your debt to society with your liberty.”

Borenstein grew up in Santa Monica, Calif., learning about white-collar crime and finances from his father, a longtime corporate attorney who is now a civil judge in L.A. Superior Court. But he didn’t necessarily plan the same career path. Corresponding with one of his father’s former clients, a federal prisoner, for more than 20 years, made Borenstein deeply idealistic about reforming the criminal justice system, he said.

After graduating from law school in 2014, Borenstein reached out to a friend who managed the Francisco Homes, a transitional housing facility for ex-prisoners. He started volunteering there once a month, helping the residents with their post-incarceration legal issues: getting their criminal records expunged, their public assistance benefits restored, or their housing and employment sorted out.

Soon, he realized that some of the men shared a problem: while they were behind bars, someone they had trusted had disappeared with something that belonged to them.

Before long, Borenstein was distributing one-pagers in prison libraries, placing ads in publications for inmates, and giving his business card to every formerly incarcerated person he met, telling them: If this happened to you, then you may have a claim. He also partnered with a prisoner hotline service, asking that any calls about theft be forwarded to him.

“It’s just my speed,” he said. “I get the deep client interaction of a public defender with the legal nerdiness and strategy of a corporate civil litigator.”

His first success came in 2016. Rodney Ficklin was released from prison in California in 2013 after serving 23 years for second-degree murder. He had hoped to live in his family’s home in South L.A., which he believed his mother — who had died of cancer while he was incarcerated — had left to him and his four brothers.

But he soon saw a “for sale” sign in the yard. Ficklin discovered that his brother Eddie, who had been taking care of their mother, had acquired power of attorney over her estate just days before her death. Eddie transferred the property to himself and collected rent from tenants, then later tried to sell the house, according to a lawsuit that Rodney later filed.

“When my brother says, ‘Well, look, man, I’ll take care of [the house] for you,’ I didn’t think nothing of it,” said Rodney. “I mean, he was the one taking care of me in there. I would’ve never thought he would do this.”

With Borenstein’s help, Rodney Ficklin sued his brother. In a settlement agreement, a judge ordered that the other brothers be made co-owners of the property once again. But like many family disputes, it is emotionally tangled. The boys’ mother wanted Eddie to have the home after he cared for her for years and added another floor, his lawyer says. Rodney still has not moved in, and the brothers cannot agree on how to pay for much-needed repairs.

“The only son who helped the mother was Eddie… Rodney had no expectation of any real property,” Eddie Ficklin’s lawyer said in a statement.

Most prisoners don’t know if they have been fleeced in the first place, Borenstein said. Many of their cases involve complicated legal concepts such as “bad faith” and “breach of fiduciary duty.” If a family member dies during their incarceration, they might not be aware they are owed an inheritance at all. By its nature, prison makes it difficult to locate and collect debts from people on the outside.

That’s why Borenstein plans to expand his work by educating new inmates on setting up bank accounts and trusts and managing assets from inside. He points out that while some incarcerated people already make investments from prison — and that many “jailhouse lawyers” have been practicing for longer than he’s been alive — they are not the majority.

Perry Fisher’s pursuit of his worker’s comp money is still in court. An aging ex-prisoner with no credit, he is now working odd jobs through an employment agency, including as a plumber. He still has not made enough to move out of the Francisco Homes, especially since the rents in Los Angeles, where his parole requires him to live, skyrocketed while he was away.

But “one thing I do have after being behind the wall for such a long time,” he said, “is patience.”