The City Trying ‘Trauma Training’ for Citizens — and Cops

Newark tries to restore trust with a novel program. 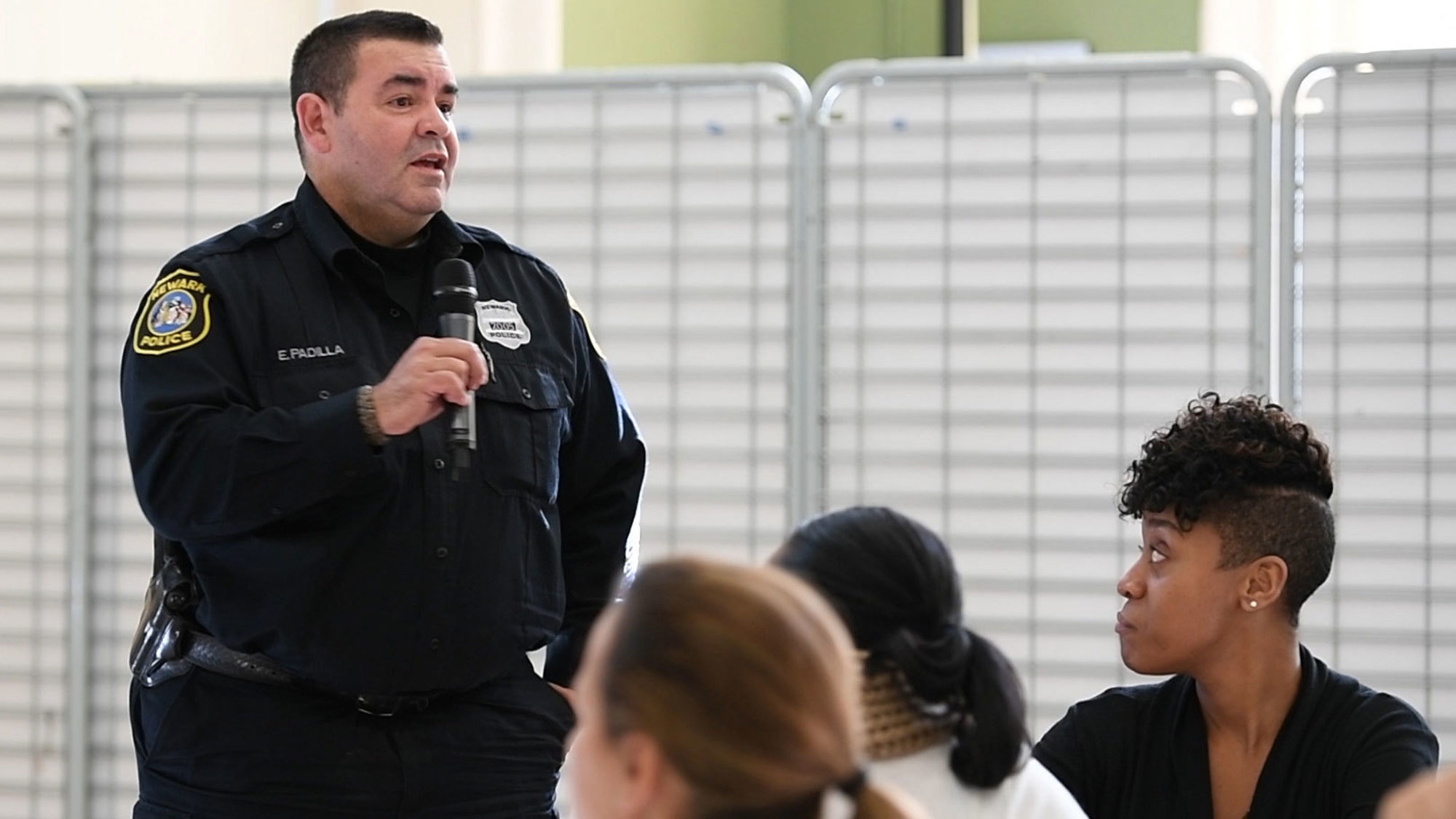 Easing the deep and long-held mistrust between law enforcement and communities of color has no easy fix. But in Newark, N.J., police have embarked on an experiment that they hope will calm tensions by immersing both cops and residents in uncomfortable truths about slavery and Jim Crow, coupled with lessons on epigenetics and trauma.

This story was produced in partnership with NorthJersey.com / USA TODAY NETWORK.

The Newark Police Department has mandated that each of its approximately 1,110 officers participate in three days of training alongside city residents, swapping stories and ideas more commonly heard on a therapist’s couch or college classroom, not in a precinct house.

As of April, the training — believed to be the first of its kind in the nation — has included 117 officers and 163 members of the public, who sit at cafeteria-style tables to share tales of personal trauma. The lessons go on to include an animated film about slavery, a debate about whether a police badge symbolizes oppression, lectures about various forms of trauma, and talks about why police tend to avoid talking about their struggles with stress and mental health.

About 10 percent of the police force has sat through the training, with more classes slated during the next few months, Ambrose said. City officials signed off on the program in 2015 after being approached by Brooklyn-based nonprofit Equal Justice USA, which developed the “From Trauma to Trust: Police/Community Collaborative Training" curriculum and is not charging the city.

“It was something that was needed,” Ambrose said. “Public trust was in the gutter.”

Newark’s police department has been under federal oversight, called a consent decree, since March 2016 after a Department of Justice investigation found officers used excessive force during arrests while rarely facing discipline for citizen complaints. Officers were also criticized for stealing from suspects and unfairly detaining people who had mouthed off to law enforcement.

The city is undergoing court-ordered changes, including rewriting policies and revamping training. The trauma class, however, is not part of the federal reform prescription. A Jan. 15 progress report showed Newark police officials have missed several deadlines for building other required training on bias-free and community policing.

“As I’ve said to the community and to police leadership: ‘If you guys want to undertake training that you think is useful to the men in blue, that’s fine, but that doesn’t mean that it will satisfy the requirements of the consent decree, and it doesn’t mean the consent decree requirements are going to be relaxed either,’” said Newark’s federal monitor, Peter C. Harvey. “The goal is to work in a collaborative manner so we all get to the same goal. Everybody wants better policing.”

Ambrose noted that 2017 saw a 20 percent drop in complaints against police compared with 2016. The progress report, however, cast some doubt on those numbers, saying the department’s record-keeping is outdated and unreliable. Ambrose contends that complaints against officers are being properly tracked.

The city’s two police unions say they are supportive of the trauma training.

“It has to start somewhere,” said Paul Boxer, a psychology professor and director of the Center on Youth Violence and Juvenile Justice at Rutgers University-Newark. “I am interested to see what kind of impact it will have,” Boxer said.

Other departments nationwide have tried unconventional police training. Baltimore has taught officers about Plato, for example, and cops in Dallas have studied the benefits of mindfulness. The trauma training, however, is not based in research, giving pause to some experts.

“It’s a significant use of resources, and it’s selling the community a kind of model of reform that’s based on a kind of wish-casting rather than concrete evidence that this is going to make a difference,” said Alex Vitale, sociology professor and coordinator of the Policing and Social Justice Project at Brooklyn College.

Equal Justice USA said its agenda stretches beyond the training, incorporating more social workers into police work and offering support services to cops. “We don’t want individuals in a bad system. We want individuals who are behaving well and systems that hold them accountable,” said Fatimah Loren Muhammad, the director of Equal Justice USA’s Trauma Advocacy Initiative, who has led the police trainings.

Graduates of the 15-hour trauma-training had mixed reactions to the experience. Will Brown, a 40-year-old pastor at Shekinah Glory Christian Church in Newark, said he told organizers not to use the word “trauma” if they wanted young men to participate.

“They don’t feel like they’ve gone through traumatic experiences, because it was regular life,” Brown said. “You have to rename it, so it doesn’t hit as hard.”

Officers said they appreciated the opportunity to explain the difficulties of the job to attentive residents but remarked that the training seemed biased against them.

“I had a problem that it was said that this uniform I wear represents oppression,” said Officer Edwin Padilla, 51 and a 22-year department veteran.

Still, Padilla said, he has incorporated lessons from the training on his daily patrol beat in the city’s 2nd Precinct. It “helped me realize how much hate, how much trauma, so many feelings, so many different variables that we come into contact with every single day, how they affect people, how they affect me as an officer.”