The Legacy of a Lynching

A memorial, a pilgrimage, a reconciliation.

On the afternoon of June 15, 1920, Louis Dondino drove his one-ton green pickup truck back and forth along the streets of Duluth, Minnesota, shouting to onlookers to “Join the necktie party.” The night before, Irene Tusken, 19, and her boyfriend, Jimmie Sullivan, 18, both of Dondino’s working class West Duluth neighborhood, attended the one-day stand of the John Robinson Circus. There, the couple claimed, six black circus workers robbed them at gunpoint and raped Tusken. The next morning, a physician examining Tusken determined she showed no signs of assault, yet the pair stuck to their story. Police responded by apprehending several black roustabouts from the departing circus train, hauling six to the jail on Superior Street, the city’s main drag.

By nightfall, as many as one in ten of the city’s 100,000 residents had gathered in front of the jail, with police attempting a futile defense under orders not to use their guns. The mob broke through, beating the prisoners and propping them up in a brief kangaroo court. Three — Elias Clayton, Elmer Jackson and Isaac McGhie, the last detained by police only as a witness — were dragged a block away to the corner of First Street and Second Avenue East. A rope was thrown over a lamppost. One by one, each man was lynched. The throng parted to allow a car through to illuminate the scene with its headlights for a photographer. Clayton’s body was cut down from the rope to better fit in the frame. The image was later sold on postcards.

The lynchings in Duluth — about as far north as you can go in the United States — are among more than 4,000 extrajudicial murders of African Americans tallied by the Equal Justice Initiative for its Legacy Museum and National Memorial for Peace and Justice, which opened in Montgomery. Ala., last week. Among the thousands attending was a delegation of 35 from Duluth, making the 1,223-mile trip by bus. Similar pilgrimages hailed from around the country, but the point of debarkation for the Duluth group is unique among the country’s ghastly racist killing sites, most of them in 12 southern states: Kitty-corner from where the lamppost stood in 1920 is the Clayton Jackson McGhie Memorial, the nation’s most prominent commemoration of a lynching at the site of the crime, predating the Montgomery memorial by 15 years.

Under the gaze of those sculptured renditions of Clayton, Jackson and McGhie, friends and family have gathered to see the bus off. One man, flashing a warm smile, wears a smart business suit and a name badge identifying him as the host of the Minnesota Chiefs of Police conference, underway a few blocks away. He is Mike Tusken, Duluth’s current chief of police. He is also the great-nephew of Irene Tusken, the accuser of the lynched men.

“This has been a journey for me, being that I didn’t find out for years my family’s history,” he says. He first learned about his great-aunt’s role in the incident during the construction of the memorial in 2003. It now has “a soft spot in my heart,” he says, and the new national memorial also tugs on him. The police conference would oblige him to forego the bus, but he would fly south the next day.

Those making the bus pilgrimage include others inextricably tied to the memorial. With a clipboard checking everyone in is Heidi Bakk-Hansen, who in 2000 as a novice writer for a short-lived alternative newspaper wrote the definitive article, “Duluth’s Lingering Shame: Clayton, Jackson, McGhie Lynching.” The piece revealed the details behind Duluth’s most infamous day, most notably naming names that had been hushed for decades. The article sparked the interest of Henry Banks, a store owner turned activist, who organized a committee for a memorial and brought it to fruition. Banks is also on the trip. The other travelers are black and white, seniors and teens not yet born when the memorial was first envisioned.

They depart, the itinerary including civil rights shrines in Memphis and Birmingham. But before those cities there is a stop in Cairo, Ill. — or what’s left of it. At least three-quarters of the city’s structures are vacant, attributed by some to an unsettled racial history that included a 1909 lynching for which there is no commemoration of any sort. Standing under a lamppost, Bakk-Hansen rectifies that omission, reading aloud from an account of the killing of Will “Froggie” James, carried out by the white women of the town.

In Montgomery, the National Memorial for Peace and Justice (a gentler, more forward-looking name than “National Lynching Memorial,” which people tend to call it nonetheless) is more than a single edifice; the total complex includes sculpture gardens, a contemplative memorial square, and a massive structure with rusted steel monoliths engraved with names hanging from the ceiling.

A duplicate set is displayed in an outdoor area, waiting to be claimed at some future date by the communities where the tragedies occurred. On each are the names, dates of death, and county and state where a black person was lynched, sometimes several on a single day.

Duluth’s three names “are like a drop in the bucket,” says Carl Crawford, the city’s human rights officer.

At least Duluth knows the names of its martyrs. Hundred of the victims memorialized in Montgomery are documented simply as “Unknown.”

“St. Clair, Illinois,” reads Crawford. “There’s about 25 names. All unknown. All on the same day.”

The main structure is a Mies van der Rohe-influenced square, in which visitors make their way around three 90-degree turns. At each turn, more of the steel markers come into view, until the scale of the atrocities becomes overwhelming. Many visitors break down and cry. A wall of plaques on the left presents the ostensible reasons for the killings. Crawford reads aloud:

“‘David Hunter was lynched in Lawrence County, South Carolina, in 1898, for leaving a farm where he worked without permission. Calvin Kimblern was lynched by a mob of people in Pueblo, Colorado’ — more evidence that this just wasn’t a Southern thing. This was an American thing. ‘Robert Morton was lynched in Rockfield, Kentucky in 1897, for writing a note to a white woman.’”

In the Legacy Museum itself, the exhibits put lynching in context as part of a systematic campaign to keep African Americans subjugated and powerless after emancipation, drawing a straight line from slavery to lynching to present-day mass incarceration of black people. Visitors may not make it that far, however. Many burst into tears at the museum’s first exhibit: haunting holographs of enslaved mothers asking you if you know where their children were sold.

The Duluth delegation is joined by an honorary member: Warren Read of the Seattle area, who was doing a genealogical search when he stumbled across the article by Bakk-Hansen. There he found the name of his great-grandfather: Louis Dondino, the man who organized the lynch mob. He kept searching, and tracked down the family of Elmer Jackson. He reached out to a cousin of the murdered man, Virginia Huston, from Jackson’s hometown of Pennytown, Missouri, and the two have met up to visit the memorial and museum together. 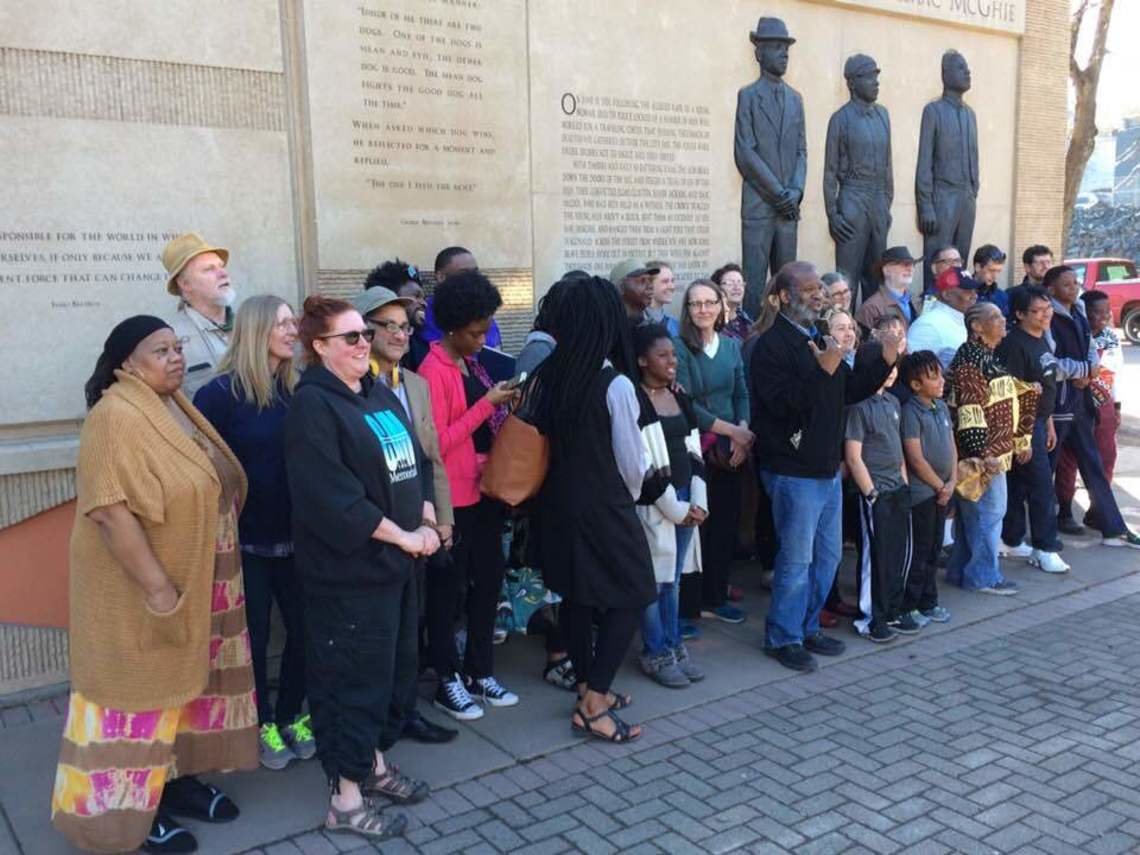 The Duluth, Minn. delegation to the National Memorial for Peace and Justice in Montgomery, Ala. gathers in front of the Clayton, Jackson, McGhie Memorial to that city's 1920 lynching before boarding a bus for a 1,223-mile journey to Alabama in April.

At an impromptu gathering with the Duluth group outside the Legacy Museum, Huston, now in her seventies, introduces Read, 51, to those new to the story.

“Warren’s great-grandfather, he was instrumental in getting the lynch mob,” she recalls. “But that’s not Warren. He shouldn’t have any guilt feelings or anything. We’re going to look forward, we’re not looking back. We’re going to build ourselves up, and live for today and live for tomorrow. He will always be my brother and I love him very much.”

Shocked as he was to discover this horror in his family’s history, Read says living with his family’s past is easier for him than others. He lives 1,500 miles away from the scene of the crime and few would know the story if he didn’t volunteer it.

“I tell people we bear a certain responsibility to right the wrongs that our forefathers did,” he says. “But I also understand that I don’t live in Duluth, my last name’s not Dondino, so I have certain amount of safety and distance and emotional distance from it.”

Mike Tusken doesn’t have that luxury. The police chief lives in Duluth and carries the family name of the false accuser. And his chosen profession, in which he has risen through the ranks from an officer working a beat, has put him in contact with many who might suspect his attitude toward African Americans reflects the animus of his forebears.

“I wonder if people in the community, especially the African-American community, if I show up at a call, are they thinking, ‘Oh yeah, I know what you're all about.’ Do they think I got to the top of the Police Department because, ‘He’s that racist'?” he said in a 2010 column in the Duluth News Tribune, which first identified his family connection to the accuser.

The edifice at First Street and Second Avenue East has become a place of solace, he says. And now, like thousands of others, Tusken has found another one, and like other somber visitors, rounds its right angles, becoming helplessly overwhelmed by the magnitude of the senseless carnage.

But it isn’t enough to grieve, he says.

“Leaving this memorial, I think everyone has to ask themselves, ‘What are you personally going to do to confront racism? To make sure that people have access and equality?’ And that really is the takeaway everyone should leave with: What are you going to do?”

Robin Washington is a regular contributor to The Marshall Project. His wife, Julia Cheng, is a past co-chair of the committee that maintains the memorial to the Duluth lynching victims and holds programs in their memory. Washington can be reached at robin@robinwashington.com or via Twitter @robinbirk