Training the Brain to Stay out of Jail

How one ambitious program aims to reduce crime by changing how repeat offenders think. 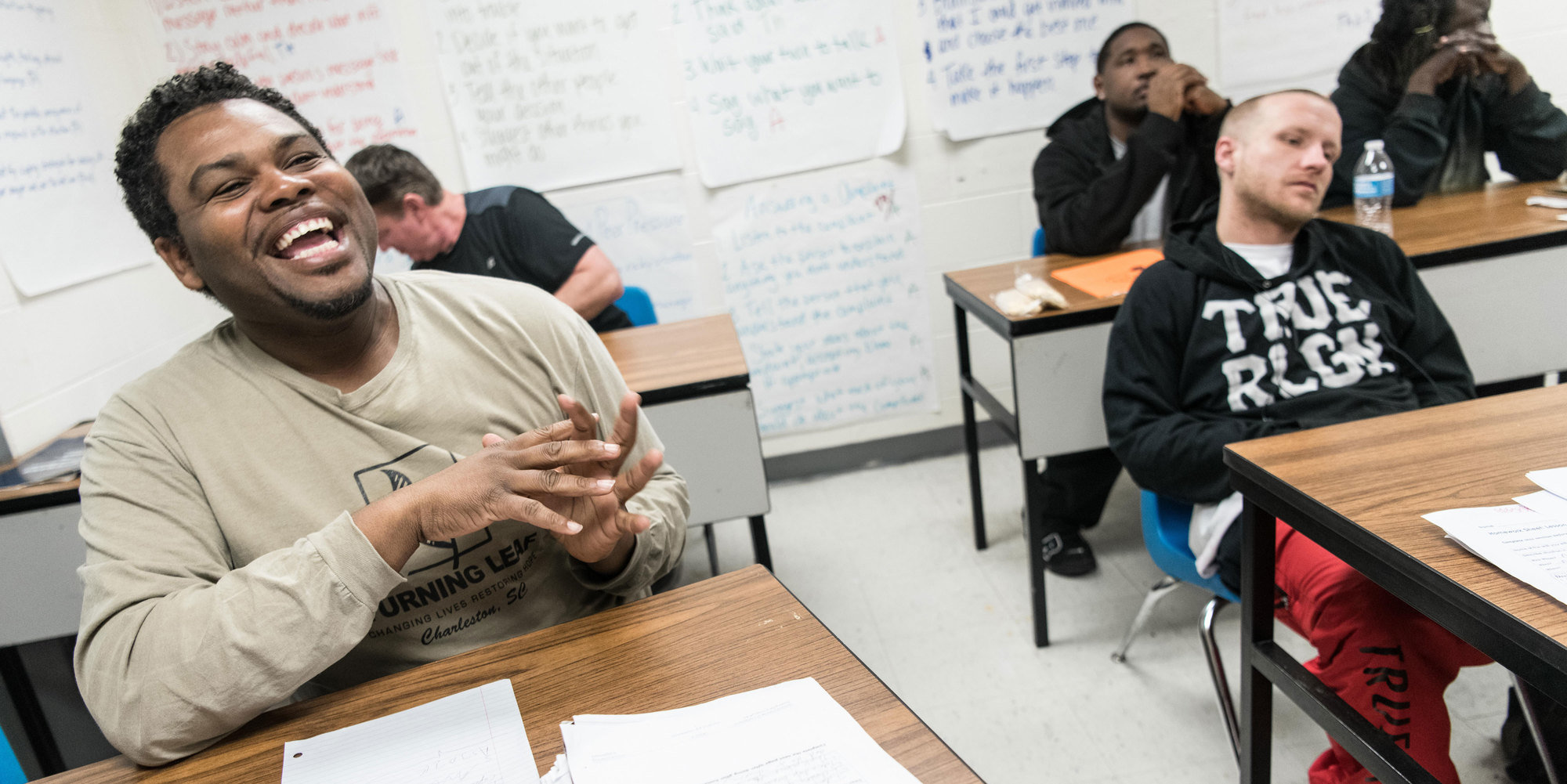 David Hayward attends a class at the Turning Leaf Project, a prisoner reentry program, in Charleston, S.C., in February. Sean Rayford for The Marshall Project
By Eli Hager

Growing up in public housing in North Charleston, S.C., in the 1970s, David Hayward was familiar with poverty, violence and loss. His mother, grandmother and brother all died when he was young, and his father was in prison. He became addicted to alcohol and cocaine and occasionally lived under bridges and in abandoned buildings, he says. Over the years, his rap sheet grew: At least 15 arrests, mostly for minor crimes like driving with a suspended license and possession of drug paraphernalia but twice for armed robbery, leading to six stints in jail.

In other words, Hayward is a typical “repeat offender.”

Crime statistics make clear that in the U.S., a handful of young men are responsible for an outsized share of crime. Like Hayward, they are often exposed as children to violence and trauma, parental incarceration, addiction, and poverty, all contributing to a lifelong inability to stay out of prison.

Yet experts in the burgeoning field of prisoner re-entry, which supports former inmates, don’t agree on what—short of addressing systemic issues such as poverty and unemployment—can prevent this hard-to-reach group from committing more crimes.

A small but ambitious nonprofit organization in Charleston called the Turning Leaf Project is taking the one approach that research seems to suggest actually works: It’s training habitual offenders to change how they think, and therefore how they act, with cognitive behavioral therapy. During CBT, patients learn to identify antisocial thoughts and then replace them with healthier ones; for years, this popular form of talk therapy has been used to treat depression, post-traumatic stress, eating disorders and other psychological problems.

Turning Leaf’s model—which has few counterparts, according to a survey of experts and of comparable programs on the National Reentry Resource Center—is to pay formerly incarcerated people to take at least 150 hours of CBT, a “dosage” that research shows patients need in order to change a habit.

On a February morning, Hayward was one of 12 men, some wearing ankle monitors, gathered for a group CBT session in a former South Carolina Department of Corrections facility adjacent to the Charleston county jail. Under a poster of the motto, “Thoughts become actions become habits become... destiny” stood the remains of a holding cell, its door jangling open.

At the front of the classroom, Hayward, 43, prepared for a role-playing exercise. It was his turn to run through a scene that in real life might tempt him to break the law: He’s been entrusted with handling cash at his new job.

When asked by an instructor what might cross his mind in such a situation, Hayward described thoughts that could lead to trouble. “My boss won’t know, and he should have a better system for protecting this money, anyway,” he said, with two fingers pressed to his temple—a gesture meant to indicate awareness of thinking. “He knows I’m a felon.”

Others in the class added: “I need this money to buy cigarettes and beer.” And: “I’m out here in the free world all by myself, and my job only pays $9 an hour.”

Now, the instructor said, it was time for them to try replacing those risky thoughts with ones that could steer them away from committing the crime. “How about, my boss needs that money to be able to pay everyone else?” Hayward suggested. “My coworkers all work for the same $9 an hour as me,” said another student. “And my kids need a good role model…”

For Turning Leaf’s participants (this year, 60 ex-prisoners between the ages of 25 and 50), such a careful examination of the mind can be revolutionary, said Amy Barch, the program’s founder and executive director. “It’s like when you buy a red Honda Civic and then, suddenly, you start seeing that car everywhere. You’re seeing your thought patterns now.” 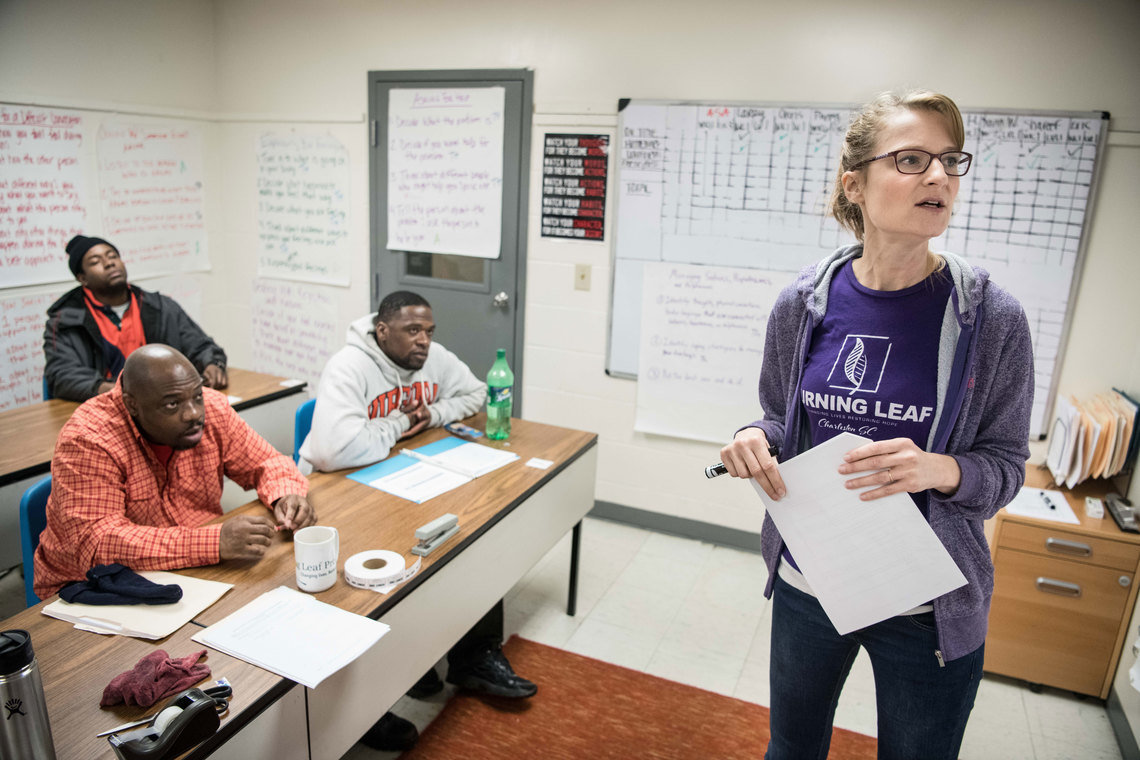 Amy Barch, executive director of Turning Leaf, at a class in February in Charleston, S.C.

To complete the program, students must attend and participate in daily three-hour CBT classes, as well as weekly, individualized case-management meetings. They also complete homework—“thinking reports”—in which they record stressful situations that arise in their lives along with how they responded to them.

As an incentive to keep coming to class, Turning Leaf takes the unusual step of paying its participants $150 a week. Students who finish the course are promised full-time employment with the county or city, often as maintenance workers or parking attendants.

For Hayward, rewiring his brain and returning to work could not be more urgent. “What will my legacy be?” he said after class. “Will they say I was a fighter?”

Hundreds of programs around the U.S. promise to help former prisoners return to society. Some offer creative arts lessons as a form of therapy. Others present entrepreneurship workshops. Still others focus on more basic needs: referrals for jobs, housing and mental health treatment.

But when the measure of success is whether participants can stay arrest-free for years, it takes a while to see what works. “Re-entry is like a medical profession, but one whose practitioners … can prescribe any treatment they want,” said Barch, 39, who founded Turning Leaf in 2011.

Barch touts the laser focus of her program, which obtained nonprofit status in 2014, on what the most recent and extensive academic research suggests will keep the greatest numbers of ex-prisoners from re-offending.

Applicants must pass a risk-assessment interview that evaluates their arrest records, their pride in their criminal histories, and their feelings toward law and authority—the same kind of test that judges use to determine whether people in jail are safe to release. Barch uses the assessment to make sure that participants are risky enough: If you want to curtail repeat offenses, after all, you have to work with repeat offenders.

The program employs some of its students at an in-house screen-printing business, which makes and sells T-shirts and other apparel. In addition to technical skills, students learn to punch a clock and tolerate a 9-to-5 schedule. (A 2012 study found that such “soft skills” help people stay out of prison by not just getting a job but keeping one.)

Half of the program’s $300,000 budget is provided by state and local government; the remainder from foundations and private donors. About one-fifth of the money goes to participants’ weekly stipends.

For its inventive model, Turning Leaf, which has four staff members, recently won praise from Sally Yates, the former deputy U.S. Attorney General, and Barch was invited to discuss crime and rehabilitation with Jeff Sessions in December 2016. The Crime Lab, a major Chicago-based anti-violence organization, also came to her for technical assistance in using CBT with high-risk young men.

Earlier in her career, Barch pursued a master’s degree in public policy. But she realized that she preferred to work directly with formerly incarcerated people and dropped out.

While holding down a waitressing job, she visited re-entry programs around the country and pored over academic literature on recidivism, or repeat offending. Eventually, she got trained in CBT by the University of Cincinnati Corrections Institute and founded Turning Leaf.

Despite early indications of success—for at least the last two years, no graduate has been re-arrested—the program retains only about 35 percent of participants. Sometimes, Barch says, she gets burned: Just-released prisoners will show up for a week to collect the money but never complete the course.

For some people leaving prison, life can be just too messy for a program. They may be struggling with physical and mental health problems and the anxiety of being accountable to several government agencies, including parole and probation. To get their children back, they may have to appear in family court. To put food on the table, they may juggle appointments for public assistance.

“What really distinguishes work in the field of re-entry is not just having the right model, because if that were true we’d have replicated it all over the country,” said Ann Jacobs, director of the Prisoner Reentry Institute at the John Jay College of Criminal Justice. “It’s whether you have the dedication to figure out something really hard and complex, namely how to help these very complicated individuals bring forth the best expression of themselves.”

Another challenge, says Joe McGrew, Turning Leaf’s lead CBT teacher, is that everyday life after prison is essentially boring. Many of his students were making thousands of dollars a day back when they were hustling, but now they’re being told to sit in class for just $150 a week.

As a result, some don’t take it seriously. In a recent Monday morning class, one wise-cracked about feeling “really emotional today” and asked whether he could go change his tampon. 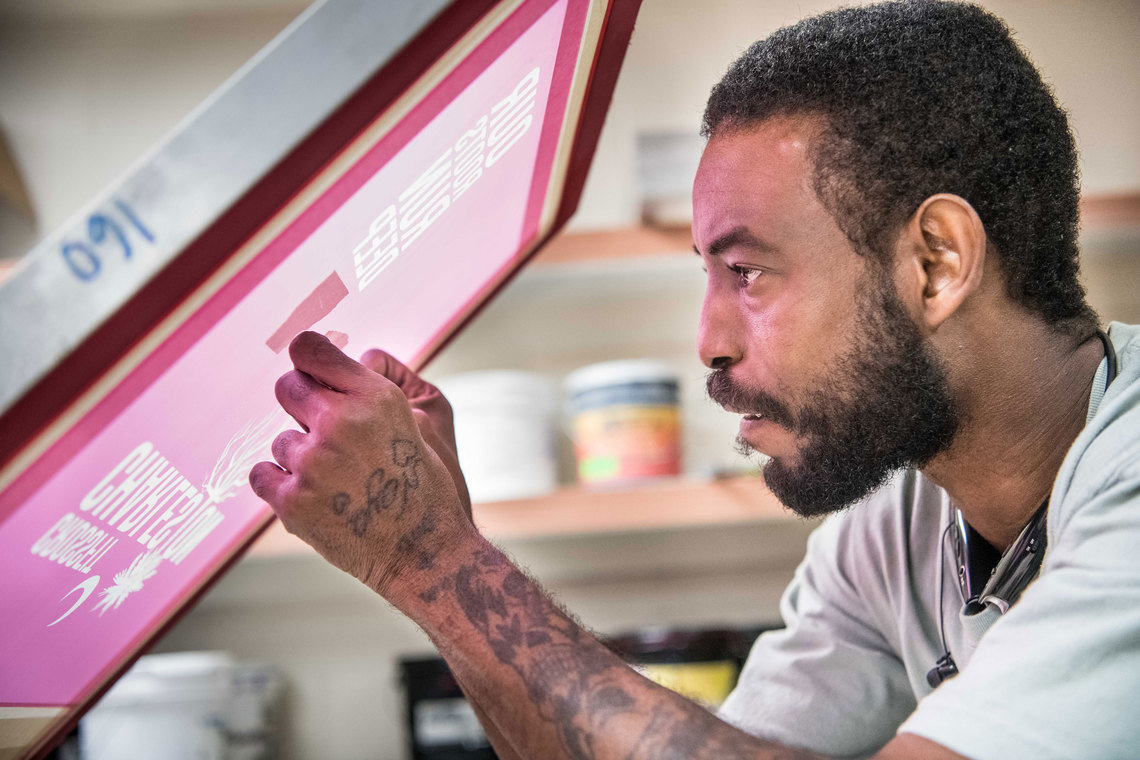 For some, communicating thoughts and feelings during therapy seems unnatural—even embarrassing. “It felt like they were meddling in my business at first, like I should’ve known this shit when I was a little kid,” said Demetrius Hudson, one of the program’s upcoming graduates.

To counter feelings of shame, Barch often tells her classes that she uses CBT in her own life. She also tries to put social, emotional and cognitive skills in the context of “hard” ones like math and carpentry. “It’s not embarrassing to learn something like, say, car maintenance later in life,” she said. “What’s embarrassing is not being able to stay out of jail as a 44-year-old man.”

For Turning Leaf, the key to overcoming students’ skepticism will ultimately be to get more graduates into real jobs with decent pay. That, in turn, will require either more government investment in communities with high unemployment or more willingness on the part of private companies to take a gamble on repeat offenders.

David Hayward has gotten that chance. And he’s already proven that he can handle risky situations by applying the skills he learned at Turning Leaf.

In 2017, Hayward got a $13-an-hour job as a line cook at one of the five-star Southern restaurants that Charleston is famous for. One night, he says, overwhelmed by the food industry’s drinking culture, he slipped and took a sip. Then he impulsively began shoplifting and checked into a hotel room to smoke crack.

But Hayward says he quickly got back on track by practicing his thinking exercises. He returned to Turning Leaf for more hours of CBT and employment in the screen-printing shop, and plans to open his own janitorial business.

“There was something different about my fall, this time,” he said, sitting at a desk in his classroom. “Like, I was falling down the mountain again—but with a rope.”