More Ex-Prisoners Can Vote — They Just Don’t Know It

Do states have an obligation to educate formerly incarcerated people about their new rights? 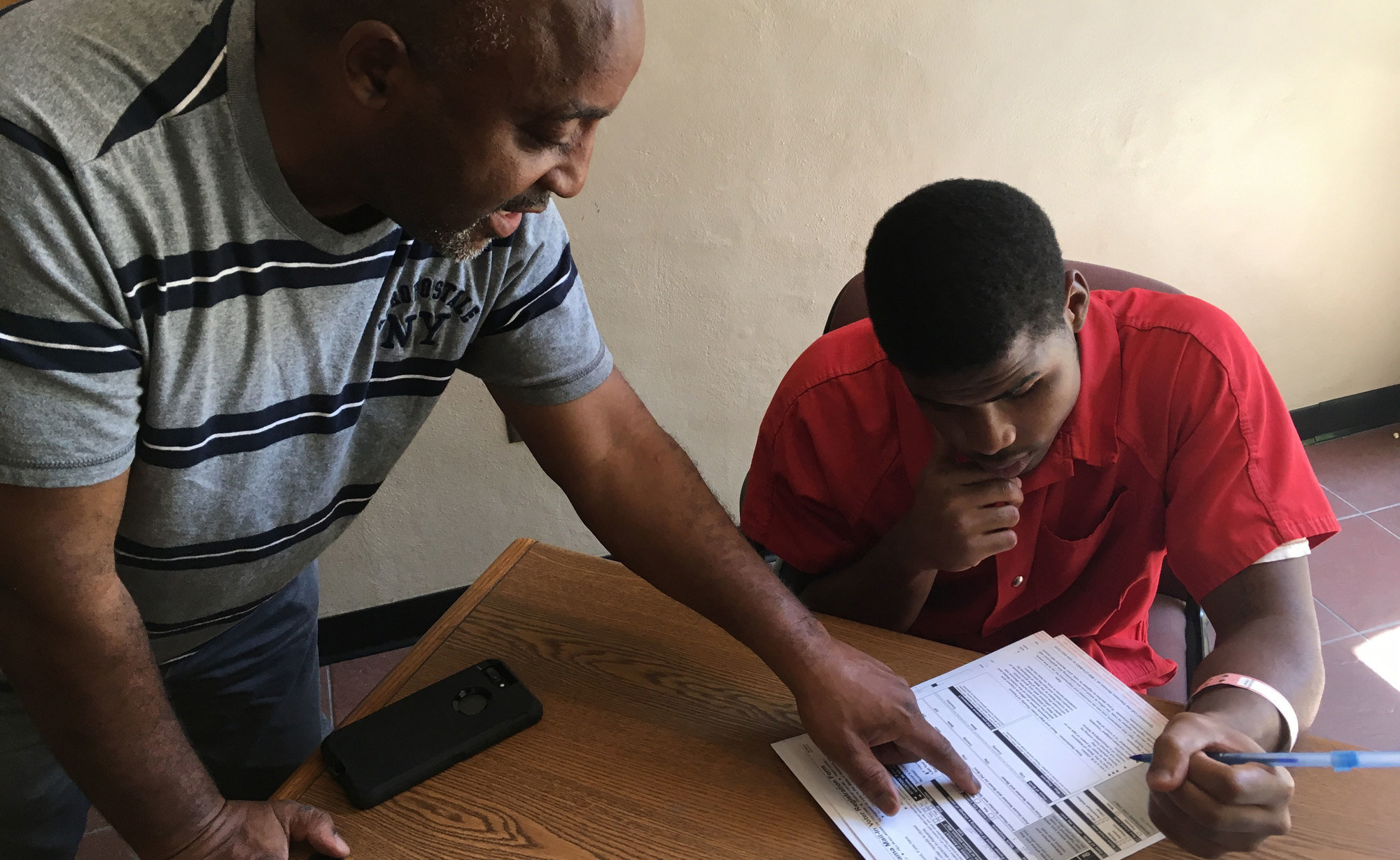 Pastor Kenneth Glasgow helps Spencer Trawick, an inmate at the Dothan City Jail in Dothan, Ala., fill out a voter registration form in June 2017. Connor Sheets/AL.com
By Eli Hager

The last few years have been good for former prisoners hoping to regain the ability to vote. In New York, Democratic Gov. Andrew Cuomo issued pardons in May to nearly 25,000 parolees in order to restore their voting rights. In Virginia, in an ongoing effort to get more people to the polling booth, Democratic Gov. Ralph Northam and his predecessor, Terry McAuliffe, have used executive powers to reinstate the rights of approximately 200,000 people with felony records.

This story was published in partnership with The Daily Beast.

And in Florida, where 1.7 million people are banned from voting because of criminal histories, an amendment to the state constitution on the ballot this November would give back the vote to every formerly incarcerated person not convicted of murder or a major sex offense.

But it’s one thing to make it legal for people to vote again, and another to ensure they know about it. Voters and even local officials may not realize what’s changed.

“Implementation is everything when it comes to voting rights,” said Danielle Lang, senior legal counsel at the Campaign Legal Center, a national advocacy group.

Next door to Florida, for example, Republican Alabama Gov. Kay Ivey last year signed a law that should allow more people with criminal records to take part in elections. Under the previous Jim Crow-era system, individual county registrars could block anyone convicted of anything they deemed a “crime of moral turpitude” from voting. Now, only people who have committed one of 47 specific felonies — out of more than 500 — can be denied the vote, and even they can apply to the state’s Board of Pardons and Paroles to get it back.

Still, the office of Alabama Secretary of State John H. Merrill has done little to let ex-prisoners know about the change.

“I don’t see any reason to contact them directly if we’re already reaching the entire population,” Merrill, a Republican, said in an interview. “I don’t care how many we’ve registered who used to be in prison, or how many are between ages 18 and 21, or how many are black, white, international descent — it does not matter to me. We don’t specifically target any single group, because we only have one goal in Alabama, and that is to make sure that every citizen is registered to vote and has a valid photo ID.”

That has meant the new law remains confusing to many Alabamans, including county registrars themselves. False information about certain ex-offenders having to pay fines and fees before getting to vote — what some activists have called a new “poll tax” — also circulated for months.

Voter registration forms continue to include a question about whether the applicant, under penalty of perjury, has ever been convicted of a “disqualifying felony.” That term isn’t defined.

In Virginia, by contrast, the Secretary of the Commonwealth’s office has a portal on its website so that ex-prisoners can look up whether they now have the ability to vote.

Even after the state’s top court ruled in 2016 that people with criminal records could not be registered to vote en masse, Secretary of the Commonwealth Kelly Thomasson has continued to do so individually. First, she gets a list from the prison system every month of released inmates who have finished their parole and probation requirements. Then her staff vets those ex-offenders with the state police and local jails, to make sure they haven’t been re-arrested.

Finally, each new voter is granted a “restoration of rights” letter, one at a time, with the governor’s signature.

“Telling someone who committed a felony to contact the governor’s office isn’t exactly natural for a lot of them — they don’t feel worthy of it,” Thomasson said. “So we’ve worked on that a lot, to make sure the process isn’t intimidating.”

In general, Democrats tend to favor getting more ex-prisoners to the ballot box, likely believing they are more apt to support Democratic candidates. Republicans tend to oppose those efforts. But no studies have comprehensively tracked the voting preferences of people with felony records, a group that goes to the polls in relatively low numbers even when they are eligible.

In Florida, it’s an open question whether — if the constitutional amendment passes — state officials will help educate former inmates about voting. In the same election, a new governor will be chosen, and he or she would decide how to put the new law into practice.

According to a Quinnipiac poll released in February, 67 percent of Florida voters support the November ballot measure; a 60 percent majority is needed to pass it. 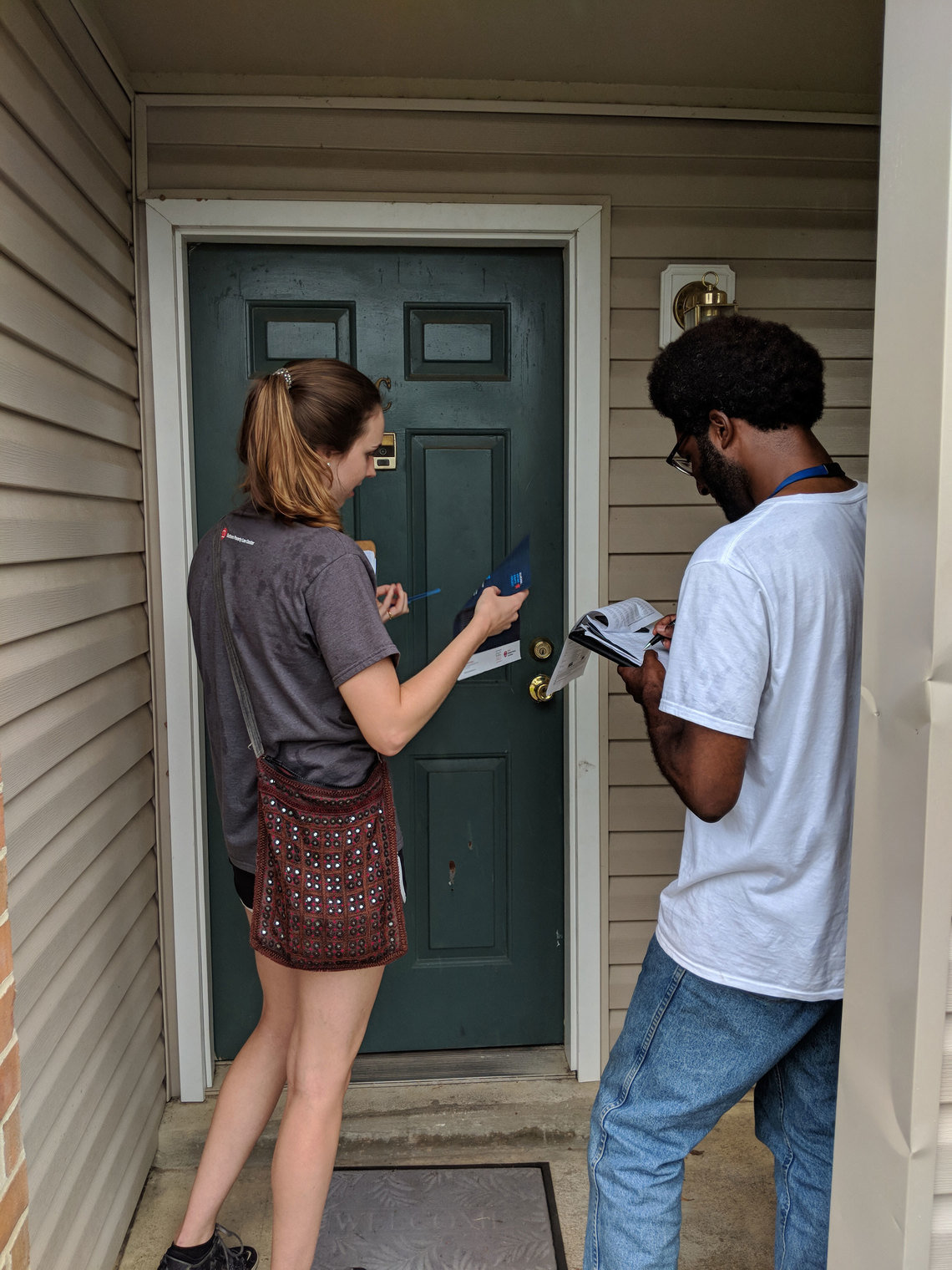 Sean Champagne and Ellen Boettcher, Alabama Voting Rights Project fellows, canvassing in Montgomery in August 2018. They told residents about the change in the Alabama law that allows many people with convictions who previously could not vote to get registered.

Voting rights activists in Alabama tried last year to force the secretary of state’s office to educate the public about the new law but lost the case in federal court. Instead, they have taken to grassroots canvassing to get the word out to former prisoners. Earlier this summer, the Campaign Legal Center, a nonpartisan, nonprofit watchdog, and the Southern Poverty Law Center launched the Alabama Voting Rights Project, with organizers in Mobile, Montgomery and Birmingham knocking on doors, running events at churches and libraries, and passing out information in jails. (Even incarcerated people can now register to vote if they didn’t commit one of the 47 felonies.

“It shouldn’t be the job of nonprofits to implement a state law,” said Blair Bowie, an organizing fellow for the project.

Crucially, the new list of crimes does not include some of Alabama’s most often-committed felonies, such as drug possession and third-degree burglary. The Campaign Legal Center estimates that more than half of the estimated 286,000 ex-prisoners who had previously been ineligible to vote could now go back on the rolls.

That could become a meaningful bloc. Only about 1.3 million people voted statewide in the recent U.S. Senate election between Doug Jones and Roy Moore.

Robert Barnes, 64, of Citronelle, Ala., was incarcerated in 2000 on a probation violation for criminal mischief and possession of a controlled substance. After he got out, he said, the state continued to block him from voting.

“I tried for years,” Barnes said. “When Barack Obama ran, I wanted to vote for the first black president... But I just gave up.”

When Alabama’s new law passed last year, Barnes didn’t know about it at first. But he saw on TV that a Mobile-area homeless shelter was holding an event, run by a nonprofit, where ex-prisoners could learn about getting the chance to cast a ballot again.

There, he finally began the process of registering to vote.

“They need to make it more public — people shouldn’t have to go through what I went through,” Barnes said. “The state wasn’t trying to help. I think maybe they was trying to depress our vote, actually.”