So Much for The Great California Bail Celebration

The first state to abolish cash bail. Why are proponents so unhappy?

To great fanfare, California Gov. Jerry Brown this week signed into law the nation’s most radical overhaul of bail, essentially abolishing cash bail and putting bondsmen out of business.

In a statement, Brown declared the new law would assure that “that rich and poor alike are treated fairly” when accused of crimes.

But even before the governor signed it, the new law was under sharp attack from some surprising voices — criminal justice advocacy organizations that have long sought to overturn the state’s cash bail system. 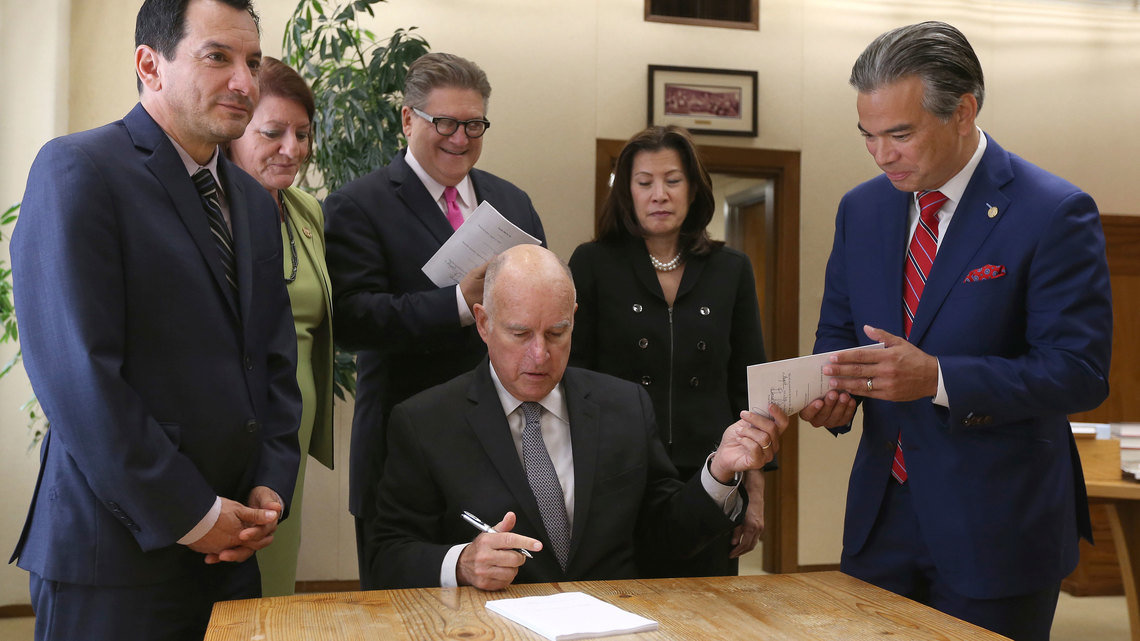 In the days leading up to the bill’s passage, many proponents of bail reform pulled their support. Several, including the ACLU, Human Rights Watch and San Francisco Public Defender Jeff Adachi, disavowed the law completely.

“We believe it is too weighted in the direction of detention and gives too much power to judges,” said Natasha Minsker, director of the ACLU of California Center for Advocacy and Policy. “There are some positives, but we are concerned that we are creating a whole new system, and that the foundation has cracks in it.”

Many criminal justice reform advocates have cited evidence that the cash bail system unfairly targeted the poor, forcing those who could not post bail to languish in jail while awaiting trial. Advocates also argued that the cash bail system pressured defendants to take plea deals, even if they were innocent of the charges, so they could get out of jail and return to their lives.

To that end, a coalition of groups, including grassroots organizations throughout the state, worked with state Sen. Bob Hertzberg, a Democrat, to craft a bill aimed at changing the system.

The bill, known as SB 10, essentially replaces cash bail with a county-based system that relies on probation departments to provide pretrial services and uses risk-assessment tools to gauge whether a person is a safety risk to the community.

In the last few weeks, as the legislative session came to a close, advocacy groups objected to new amendments added to the bill and began to withdraw their support, saying the new provisions gave too much power to judges and put too much faith in risk-assessment tools, tests that predict whether an individual is likely to offend again.

“This bill, in the 11th hour, was hijacked,” said Gina Clayton-Johnson, founder and executive director of Essie Justice Group, a nonprofit that works with women with incarcerated family members. “We entered this in a really pragmatic way. The fact of the matter is, this bill takes us backwards.”

At issue is what these advocates view as a system that gives almost absolute power to local judges, who are elected officials in California and might be tempted to pander to law-and-order voters by keeping defendants locked up.

“The good is that it eliminates money bail completely, and the bail industry will no longer have a role in profiting from people who have no choice but to post bail,” said San Francisco Public Defender Jeff Adachi. “But in many ways, it replaces one evil with one that’s even worse in that it gives unbridled discretion and power to judges.”

Under the old system, defendants were given a bail amount to post, and those who could afford it could be released. Judges could order that defendants be held without bail if they represented a public threat or a flight risk.

The new system includes a presumption against release for people accused of violent felonies and for those who score high on a risk assessment tool.

People accused of low-level misdemeanors will be booked and released within 12 hours, with some exceptions, such as domestic violence. They won’t undergo a risk assessment.

People accused of high-level misdemeanors or low-level felonies will undergo screening using a risk assessment tool that will typically be administered by county probation departments. Most of those who score “low risk” will be released within 24 hours.

The courts will determine the fate of defendants deemed “medium risk.”

People the test ranks as “high risk” will see a judge at arraignment. Those charged with a violent felony or with other factors that weigh against them, such as a conviction for a violent or serious felony within the last five years, will usually await trial in jail.

For Senator Hertzberg and others who continue to back the new law, including the Service Employees International Union, which represents many relatively low-income workers, removing money from the system is an important step.

“We got into this because we wanted to eliminate the cash bail system,” said Tia Orr, director of government relations for SEIU California. “For us to be the first state in the nation to do this was something we couldn’t walk away from.”

Orr acknowledged the concerns about the bill, particularly that it doesn’t require the gathering and analysis of data on how the new law will play out in courtrooms throughout the state.

Hertzberg has committed to introducing legislation in the next session to require data collection, said spokeswoman Katie Hanzlik.

Criminal justice reformers are also wary of the measure’s heavy reliance on risk assessment tools, many of which have been shown to be skewed against black people.

Although each county will choose its own risk assessment tool, Hanzlik pointed out that a statewide panel of experts, including an expert on bias, will assess each county’s tool and its guidelines.

“Within the first few years, we’ll know whether it’s working the way it should or not,” she said. “We’re relying on everyone at the table to make sure it’s implemented in a way that will benefit people.”