Working Their Way Home From Prison 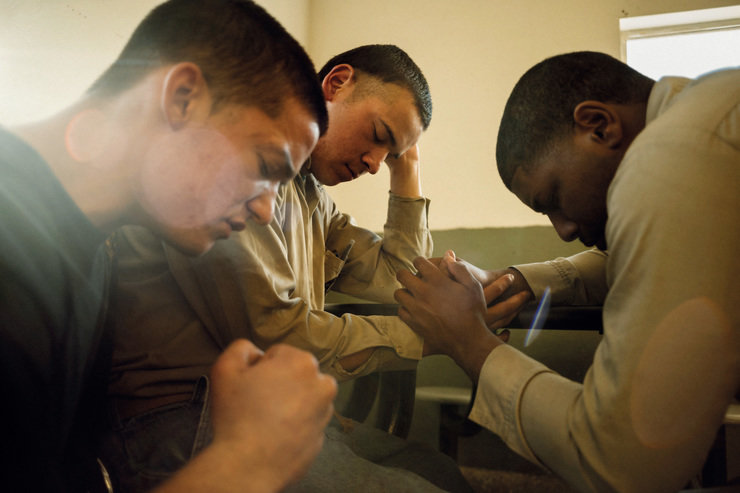 When young men arrive at Pine Grove Youth Conservation Camp—California’s first and only remaining rehabilitative prison camp for offenders sentenced as teens—they first notice the trees. Pine Grove sits in a small valley just above the snow line in the western Sierra Nevadas, between a casino and the mountains. The second thing they notice is that there is no barbed wire surrounding the property.

Photographer Brian L. Frank, a 2017 Catchlight Foundation fellow, spent a year working with The Marshall Project to examine alternatives to traditional incarceration. One piece of that work, shown here, focuses on the young men incarcerated at Pine Grove, also known as “fire camp.” Frank documented the men, who range in age from 18 to 24, as they learned to fight fires and perform other wilderness jobs, such as clearing brush and streams. He followed the prisoners as they attended school and, eventually, were released back to their communities.

Published in partnership with California Sunday Magazine and supported by CatchLight, a nonprofit dedicated to visual storytelling and the power of photography to drive social change.

Those young men included Marcus Tapia, Kermit Moore and Kain Castro, who each came to Pine Grove in 2016. Tapia and Moore grew up in Los Angeles and were raised primarily by their grandparents. Tapia was imprisoned for armed robbery and gun possession; Moore for attempted murder. Castro grew up in Salinas, where he lived with his mother, brother and sister. In his teens, Castro was arrested and sent to prison for assault. All three were incarcerated in state prisons for juveniles before earning their places at Pine Grove with good behavior and by taking classes and programs.

“Everything was good about it except the time, you know?” Tapia says of Pine Grove. “Because time kills you.” For Moore, the camp felt like a “neutral zone”—for once, his gang or race didn’t seem to matter.

There are two ways to leave Pine Grove: get paroled or get kicked out and serve the rest of your time back in prison. Tapia and Moore took the latter route—Tapia for getting into a fight with another ward, Moore for talking back to a captain. After more than a year at the camp, they each were transferred to a juvenile prison in Ventura County. Tapia was released in February 2018, two months before his 21st birthday. Moore, now 21, was paroled over the summer.

Castro was considered a model ward at Pine Grove and was released in October 2017 at age 18. Coming home felt like a test, he says, “like everyone’s looking at you.” A few days before he arrived home, his older brother violated parole and was sent back to prison. Eight months later, Castro was arrested for missing a probation appointment. Not long after he went back to jail in Monterey County, he got into a fight and was charged with assault. He’s now waiting to be sentenced.

Marcus Tapia learned to adapt to prison during his time at a higher-security facility. “I’ll tell you this: Every day I woke up and realized where I was, and I used to get mad at myself. I put a mask on me. I hid my emotions. I learned how to smile and just shake it off. I used to be like, ‘It’s one day closer to home,’” he said. Soon after his arrival at Pine Grove, he was sent by guards to collect the American flag at the end of the day.
Tapia speaks with family back home in Los Angeles. “There were a lot of trees—pine trees—I’d only seen in the movies. I was looking at so much freedom. I did not see one fence around that camp, and it was a good feeling. But even though it was a good feeling, you still get lonely. You still feel institutionalized,” Tapia said.
Small items from home, like rosary beads, are allowed at the camp.
The young men at Pine Grove, ranging from 18 to 24 years old, line up before they set out for a day of road work.
Remote and surrounded by thick forest, Pine Grove doesn’t have any walls.
Pine Grove prisoners come out of their barracks after a day of working in the field to attend school at the camp.
Waiting for a head count, which occurs every hour.
Tapia, at his small apartment in East Los Angeles, after his release from prison. “They gave me the opportunity for parole. I was speechless when they told me that I could go home. It was already three and a half years, almost four. I was like, ‘Damn, I ain’t going to have no more jail food no more.’ I wanted to go home. I was ready. It was like, is this real? ” Tapia said.
An altar for Tapia's best friend, “Yayo,” who was killed in 2018. “Yayo and I did our time together. From day one, we clicked. He was a really good listener. When I was having a bad day, he would notice it and say, ‘Talk to me, my boy.’ He was out eight months before I got out. I got a phone call from one of my friends. I remember him saying, ‘Yayo’s gone. He’s dead. He got killed. They killed him.’ And my heart stopped,” Tapia said.
Tapia, with his girlfriend, Isabel, at their small apartment in East Los Angeles, soon after his release from prison.
During his incarceration at Pine Grove, Kermit Moore clears debris from a creek bed as part of the “rehabilitation through labor” practiced at the camp. “Being up there on that mountain, seeing the stars—I just liked being in the wild. But people don’t know how it feels to be gone. Just snatched away,” Moore said.
Upon returning to camp after a day of work, the men are strip-searched for contraband. “My whole life—jail. I know a little bit. I’m a little street smart, a little book smart. But I really don’t know nothing, because I ain’t lived,” Moore said.
Moore visits family in South Central Los Angeles after his release from prison. “Your family is all you have in this world. Nobody wants to be alone. Nobody wants to be by themselves, because that’s the worst feeling ever, when you feel like you’ve hit rock bottom,” said Moore.
Moore holding his nephew, who was born while he was incarcerated.
Moore rose at 4 a.m. to see if he could get a job for a day on a road crew. He wanted to make some money after losing his new job at UPS after being accused of stealing an iPhone. “I just want to be independent. I don’t want to use nothing. I don’t want to be on the county or SSI. I want to be able to supply from myself,” Moore said.
Excited for his release, Kain Castro brushes his teeth on his last day at Pine Grove. Castro has been a prisoner since he was 14 years old and earned his release from Pine Grove at age 18. Castro faces the daunting challenge of being placed on a lifetime gang registry upon his release, plus five years of strict probation, with any number of probation violations being enough to send him back to prison.
Castro awaits release on his last day at Pine Grove.
Castro in his mother’s garage in Salinas, California, which he made into his bedroom.
Soon after coming home, Castro visits the gravesites of friends who died while he was away.
Castro spends time with friends at his family's home.
Tags: →Visual