How One County Became a Lab for California’s Prison Reform

San Joaquin went all in. Now it’s a model. 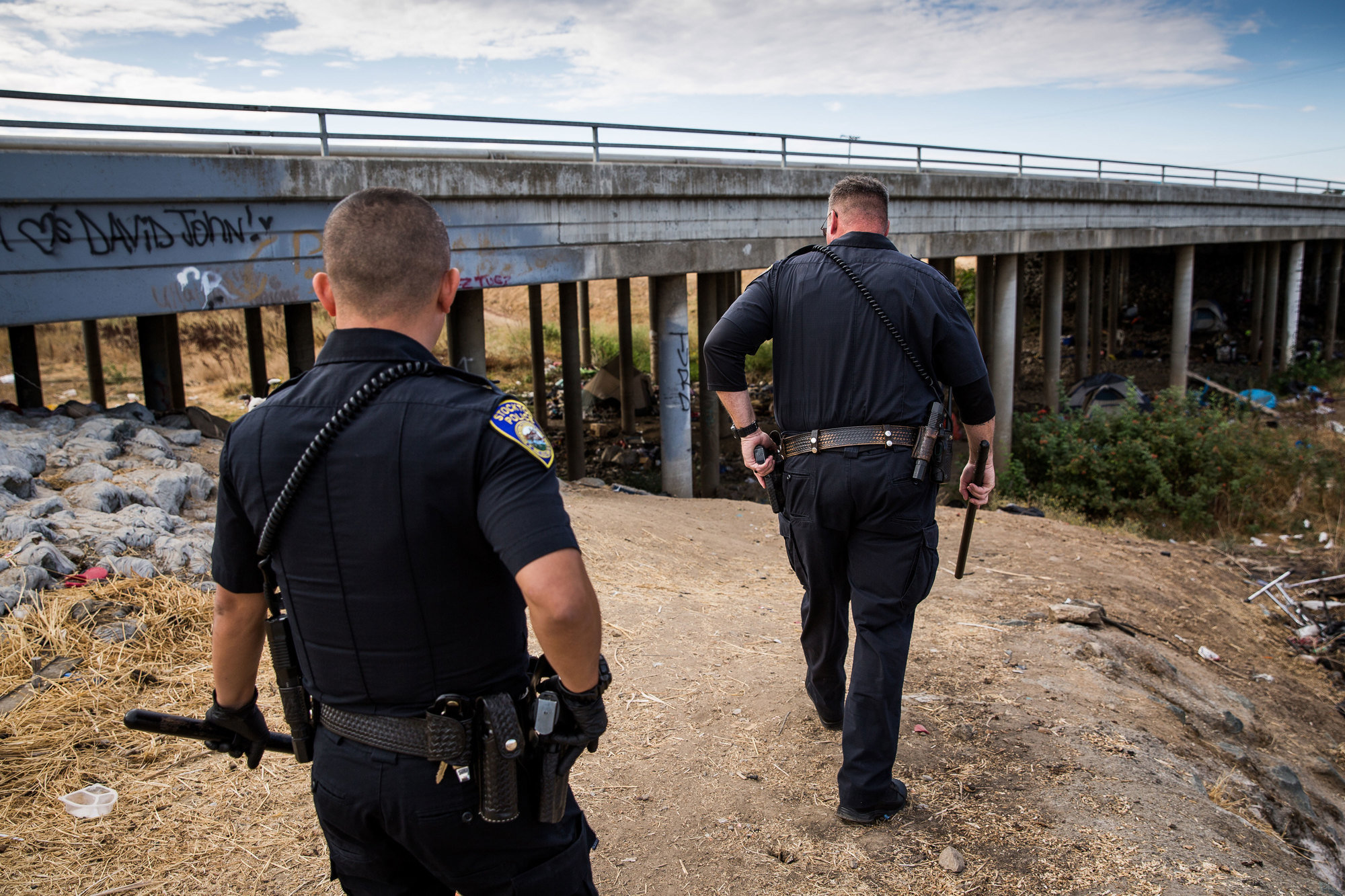 When California lawmakers unveiled a plan in 2011 to reduce the number of inmates in state prison, officials in San Joaquin County thought the timing couldn’t have been worse.

This story was published in collaboration with the Los Angeles Times.

There were already signs that a recent dip in crime might be coming to an end in this Central Valley county east of San Francisco. Homicides were up by nearly 40 percent from the previous year. And in the midst of a financial crisis, the county and local cities were laying off police officers and prosecutors.

Now the county would have to quickly absorb an influx of nearly 1,000 released prisoners.

Related: Crime is up in California, but the reason why is a mystery.

“We were super concerned,” said Stephanie James, the county’s probation chief. “It was such a significant number that were coming out of prison who were at a high risk to commit a violent offense.”

As they braced themselves, county officials set up a system of collaborative courts to help former prisoners find jobs, housing and treatment for mental health and addiction problems. They pioneered a program that uses sophisticated risk assessments rather than cash bail to decide which defendants were safe to release before trial. And local officials launched an array of novel anti-crime programs, including one aimed at building trust between police and residents and another that gives stipends to young people considered at risk of committing gun violence.

What happened next surprised many.

While overall crime in California increased slightly after 2011, San Joaquin County’s dropped 20 percent and hit a decades-old low last year. The county’s jail, which had been under court-ordered monitoring because of dangerous overcrowding, now has empty beds. Participation in specialized drug courts has increased and recidivism among newly released offenders has dropped.

It is unclear how much of the county’s success is the result of its new programs rather than other factors, such as hiring more officers once the county’s finances improved. But San Joaquin County has become an intriguing model for other counties curious about what might work in an era of criminal justice reform.

Emissaries from Yuba County have drawn inspiration from its educational programs for offenders. A Kern County judge came to examine an alternative court and spoke highly of the collaborative court model to local leaders in Bakersfield. And after the governor signed sweeping legislation this year eliminating cash bail for pretrial defendants, dozens of counties sent representatives to learn how San Joaquin County adopted a similar approach years earlier.

San Joaquin County officials acknowledge there is more to do. Although the county’s crime rate has been cut almost in half since the mid-2000s, it remains among the highest in the state. And most of that reduction was in property crime, not violent offenses, which increased in the last few years before dipping slightly in 2017.

But San Joaquin County offers useful lessons in how a county struggling with poverty and crime has adapted to — and embraced — recent criminal justice reforms. 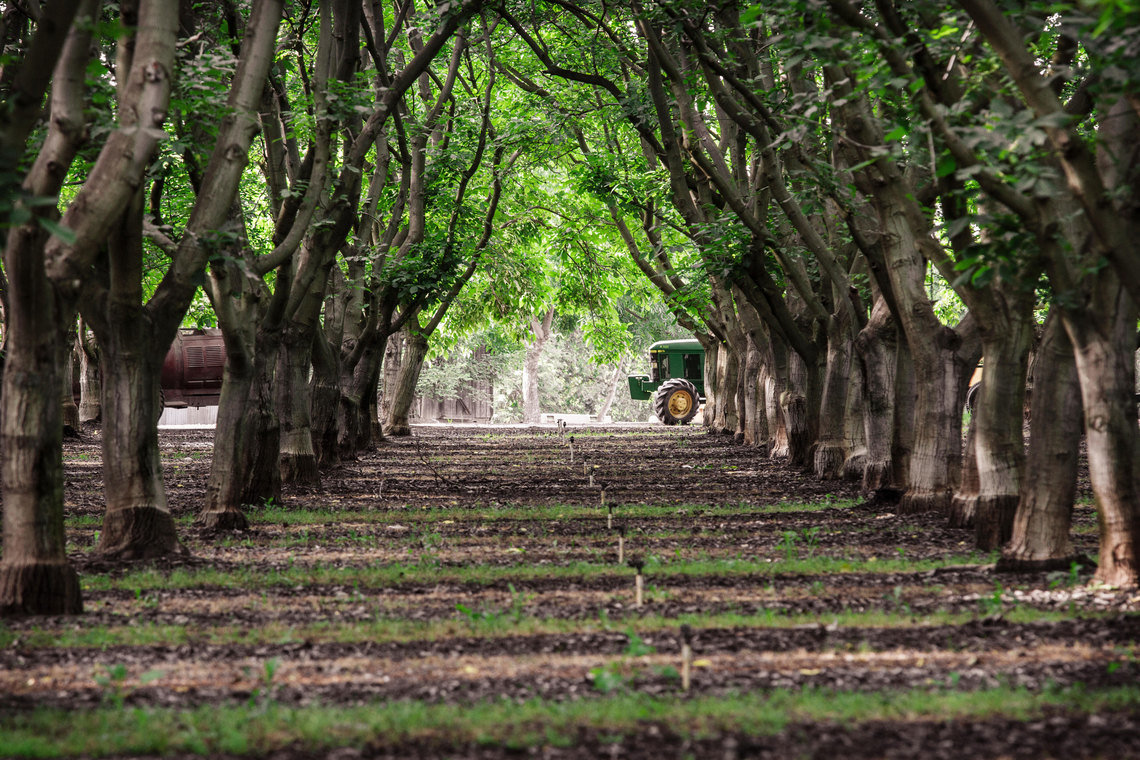 With a population of about 745,000, San Joaquin County is a largely rural, agricultural area. The landscape is dotted with cherry and apple orchards, fields of grape vines and tomatoes, and giant, boxy shipping warehouses that have sprouted in recent years.

Its largest city, Stockton, has some of the dirtiest air in the nation and routinely makes lists of the worst places to live in the United States. Poverty is out in the open. Tents line a nearly empty canal a few blocks from downtown. Empty storefronts line the streets, many with hopeful “available” banners.

After a housing boom abruptly ended in the 2008 financial crisis, Stockton became the largest U.S. city to declare bankruptcy. The number of officers in the city’s police department shrank by more than 20 percent. In Stockton, the police union put up signs around town: “Welcome to the 2nd most dangerous city in California: Stop laying off cops!” 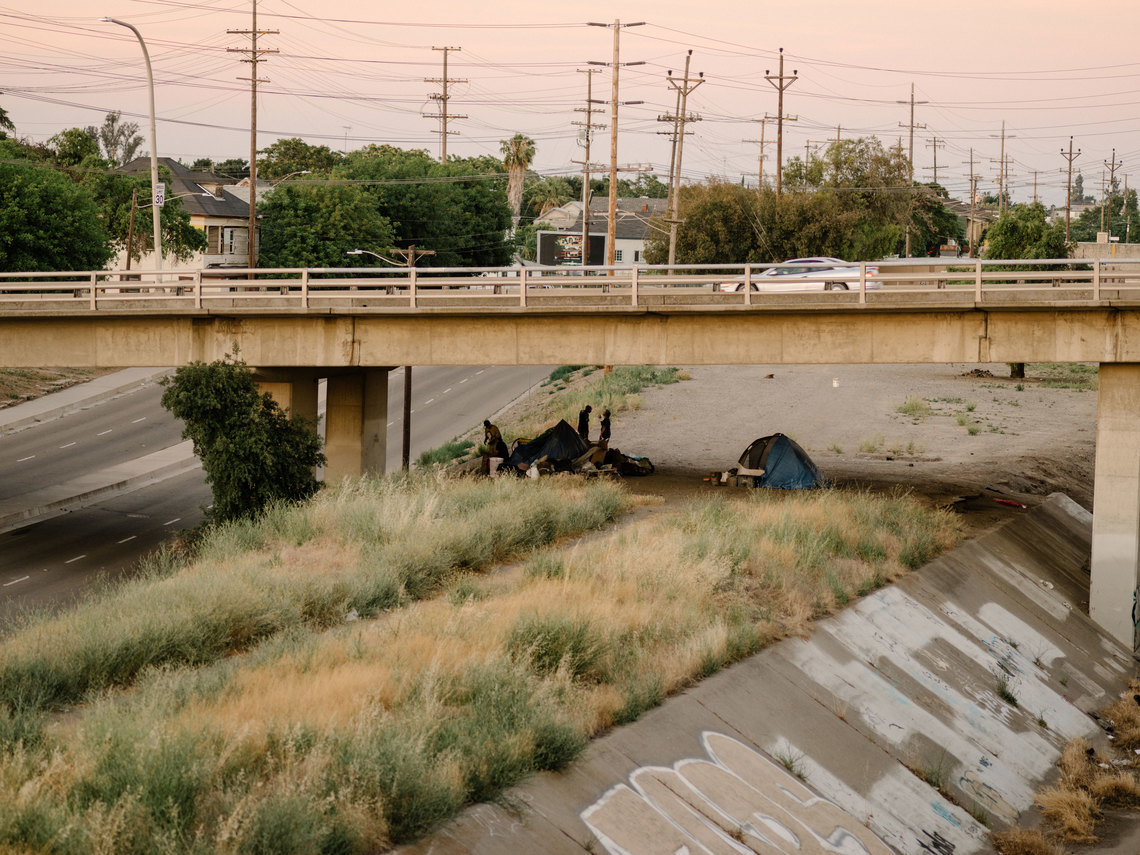 A homeless encampment in Stockton in 2017.

In 2011, California lawmakers passed Assembly Bill 109, known as “realignment,” which shifted responsibility for thousands of people convicted of nonviolent crimes from state prisons to counties. People convicted of nonviolent crimes would now serve sentences in county jails, not prison, and local communities, rather than state parole, were responsible for supervising them upon release.

As part of AB 109, the state promised to shift billions of dollars to the counties. San Joaquin County decided to use its money—about $6.8 million in the first year—on its day reporting center; specialty courts aimed at helping former prisoners transition back to the community; and expanded use of a risk assessment tool to rank each former inmate’s likelihood of committing new crimes.

The county tracked data on each person affected by the new laws. James said she noticed the vast majority of arrests of former prisoners were for property crimes. To her relief, the county’s homicides fell by nearly 50 percent in 2013.

Stockton’s police chief, Eric Jones, credits the recent crime drops, at least in part, to a transformation in the city’s policing strategy. Stockton is one of six cities in the country chosen as part of a federally funded project called the National Initiative for Building Community Trust and Justice.

During the project, which began in 2015, Stockton police officers have undergone training on how to limit racial and other types of bias and met with community members to discuss bias and how to avoid it.

Representatives from law enforcement, probation, the courts, the district attorney’s office, the public defender’s office and social service agencies meet monthly to examine data on arrest rates and discuss how to help newly released inmates so they don’t reoffend. 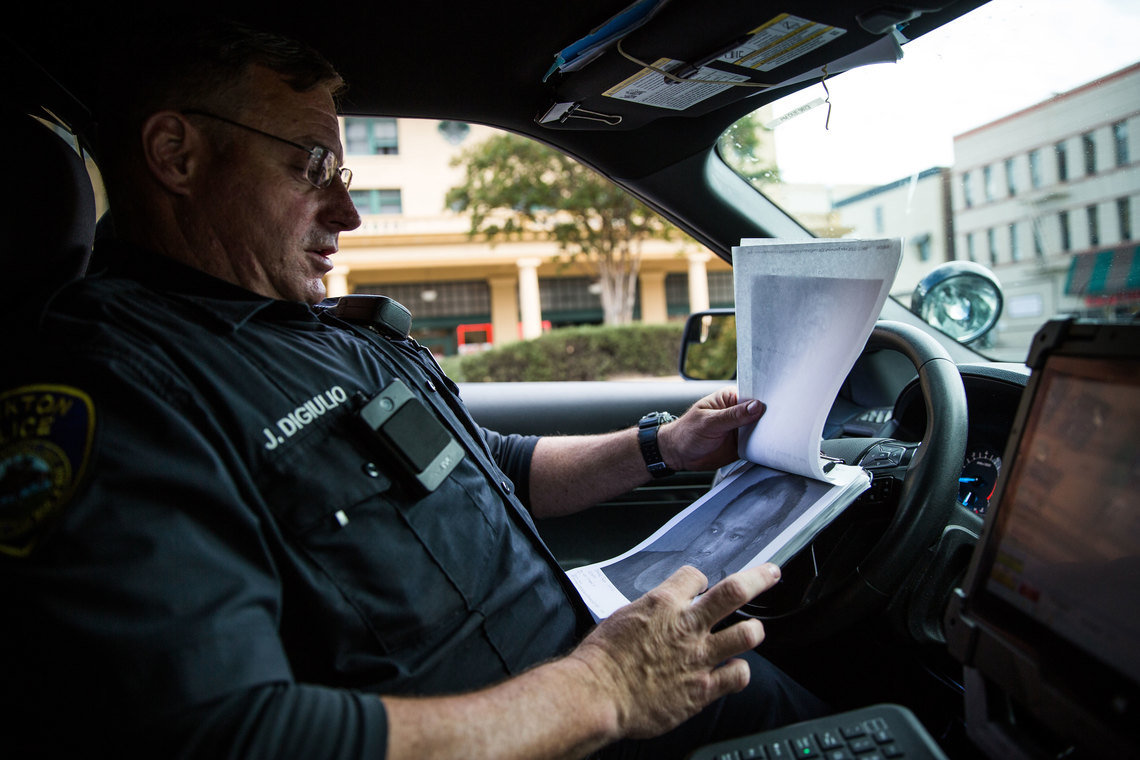 DiGiulio looks at photos of people whom he needs to bring back to court in Stockton.

Once the financial outlook improved, Jones was able to increase his department’s ranks—as were other local law enforcement agencies. After dipping to a low in 2011 of 866 sworn officers, the county added nearly 150 more officers by 2017.

Tubbs, who first decided to run for office after his cousin’s murder, has championed a number of experiments aimed at improving public safety and reducing poverty, including one that offers local families $500 a month in donated cash, no strings attached.

“Crime has always been issue No. 1, but the narrative in this city is one about being a second chance city,” Tubbs said.

Leading the court’s initiatives is Judge Richard Vlavianos, a former prosecutor who says he “probably sent more people to prison for drug offenses than any other DA in this county” before he joined the bench in 1999.

Vlavianos wondered if the courts could function more like a hospital emergency room.

“All of the people coming in have injuries,” he said. “The job of the court is to screen, assess and refer. Because we’re never going to get a behavior change if we don’t address what’s bringing them in.”

In 2008, he began experimenting with alternative sentencing courts aimed at connecting people with services such as housing, employment and substance abuse treatment, in addition to handling their criminal cases. He started with drunk drivers. When he saw recidivism drop, he added more courts.

There are special courts for people who violate the rules of their state supervision under the new law and for people convicted of nonviolent felonies no longer requiring time in state prison. At any given time, about 1,500 people are enrolled in the collaborative courts, which last year accounted for about 7 percent of new case filings.

“It’s the ER right there,” Vlavianos said, before going onto the bench on a recent afternoon. 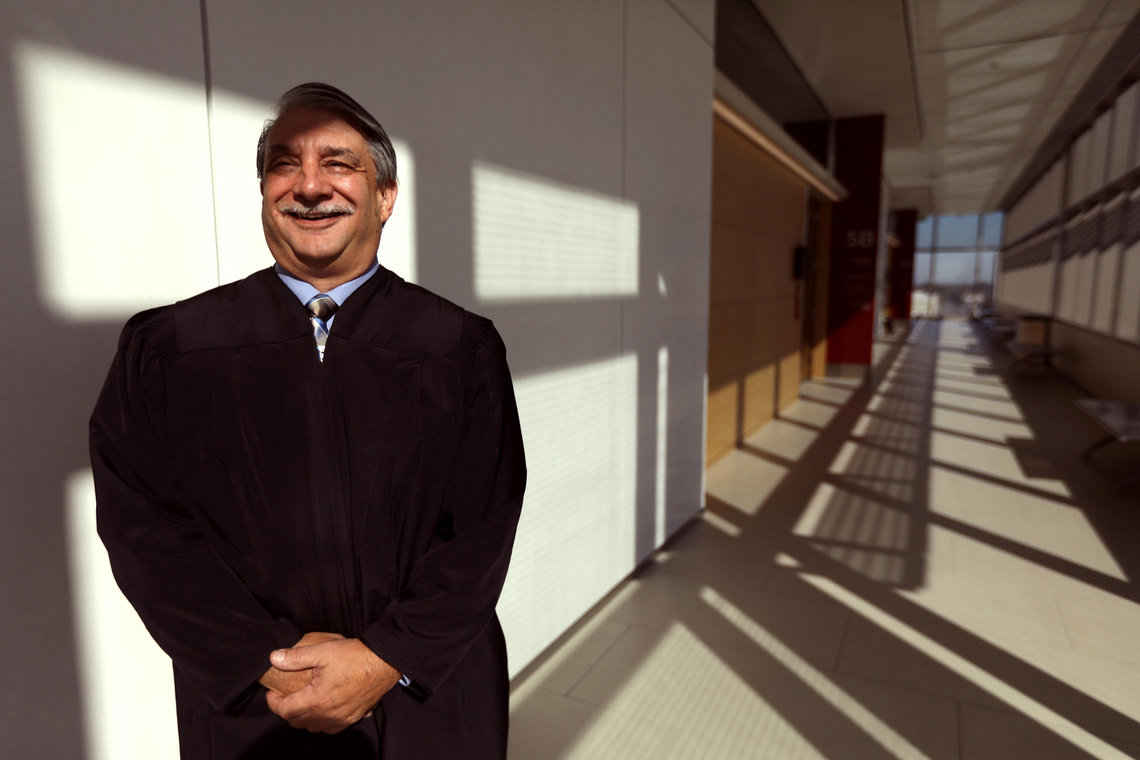 A woman in orange jail scrubs stood up, clearly agitated. She said she had a mental illness and missed her court dates because she was in and out of the hospital. The judge, glasses resting on the tip of his nose, looked at her calmly.

“I need you to take a deep breath,” he said. “I need to have a plan before I release you.” He asked a case worker to talk with her.

Vlavianos turned to a burly bald man with a mustache who had missed a meeting with a probation officer. The man said he’d had a hard time getting around because he relied on buses.

“I need your help,” the judge said. “I keep trying to keep you out of jail, and you keep putting yourself back in.”

Herbert Finton Jackson Jr., 45, had been in and out of state prison and under supervision for years when he landed in Vlavianos’ court about three years ago. The judge noticed him struggling with his drug addiction and Jackson was placed in a residential treatment center.

Jackson finished his formal supervision and now has a job selling housewares at Macy’s.

“That court turned my whole life around,” he said.

The judge uses a strategy based on research that found a few days in jail is enough to disrupt problematic behavior, but that people kept in jail for longer periods get comfortable and are more likely to later reoffend.

In his court that handles more hardened offenders, Vlavianos said he noticed a 40 percent drop in violations this year after he reduced the time of jail stays for scofflaws and required more intense supervision.

Defendants who flout Vlavianos’ rules can expect a knock on their door from Jason DiGiulio, one of two Stockton police officers assigned to work with the judge.

Tall and stocky with short-cropped hair, DiGiulio is hardly a liberal reformer. He blames Proposition 47, the 2014 ballot initiative that reduced sentences for drug and some minor theft offenses, for making it harder to arrest shoplifting suspects. Under the law, thieves now have to steal more than $950 worth of goods—up from $400—before they can be charged with a felony.

But he has warmed to his role bringing people directly to Vlavianos, not jail, so the judge can quickly find out why scofflaws are violating the rules.

On a hot morning in late summer, DiGiulio flipped through a clipboard of mugshots in his patrol car. At any given time, he is looking for roughly 50 to 75 people.

He pulled up to a white bungalow with a well-manicured lawn. A woman who answered said the man the officer was looking for lived in an apartment in the basement but that she hadn’t seen him in days.

It took a few weeks before DiGiulio was able to bring the missing man to court, where Vlavianos ordered him to meet with a probation officer.

About three months later, DiGiulio said, the man had earned a spot on what the judge calls “the A Team,” an honor roll of sorts for the collaborative courts.

“Jail or prison is needed,” DiGiulio said. “But if you send an alcoholic or a drug addict to prison, when they get out, they will still have the addiction. You’ve got to find them at just the right point, and you wear them out.”