When Prisons Cut Off Visits—Indefinitely

It’s been nearly 25 years since Michigan adopted a controversial visitation policy. Families have been fighting it ever since.

By Christie Thompson
Looking Back at the stories about, and excerpts from, the history of criminal justice.

In 1995, Michigan prison officials implemented a controversial new policy: Any inmate found guilty of two substance-abuse violations would lose all rights to visits, except from their lawyer or minister. The state prison population had grown significantly in the early 1990s, as had the use of drugs inside. Guards worried contraband was being smuggled into facilities and wanted to limit the number of outsiders coming in.

Families were outraged. Thousands wrote letters, and hundreds testified in public hearings. In addition to the punishment for drug use, the state had banned any minors from visiting prisoners who weren’t their parents. That meant nieces, nephews, siblings, cousins and godchildren were cut off entirely. While prisons often take away visits for disciplinary reasons, this ban was uniquely severe and long-lasting.

People in Michigan prisons and their loved ones have been fighting the rule ever since.

A group of incarcerated women sued the corrections department five months after the policy was announced. They contended it violated their right to “intimate association” with young family members, and that the substance-abuse rule was cruel and unusual punishment. The lead plaintiff, Michelle Bazzetta, was not going to see her nephew, who had just been born, until his 18th birthday. Others in the suit would never get to see their young children who had been adopted by friends or family members.

The plaintiffs brought in psychiatrist Terry Kupers, an expert on prison conditions, to testify in the federal court hearing. He cited a 1972 study by the California corrections department that found individuals with consistent visits while locked up “were one-sixth as likely to be back in prison a year after their release than those who didn't have that much contact.” The district court, and later the Sixth Circuit Court of Appeals, ruled in the women’s favor.

The state corrections department appealed to the U.S. Supreme Court, bringing the local fight into the national spotlight. Attorneys general from 20 states submitted an amicus brief in support of Michigan officials, saying prisons had to be able to restrict visits in order to curtail drug use. Public defender offices from across the country and nonprofits like the American Civil Liberties Union were on the incarcerated women’s side, arguing that there was no real safety interest in prohibiting families from visiting, especially visits where there’s no physical contact. By the time the Supreme Court took the case, the corrections department had changed its policy to allow young siblings in. But the ban on other relatives under 18, and the rule surrounding drug violations, remained.

In 2003, all nine justices sided with prison officials. “The restrictions on visits by inmates with substance-abuse violations serves the goal of deterring the use of drugs and alcohol in prison,” Justice Anthony Kennedy said when announcing the decision. The justices noted wrote that people can still write letters or talk on the phone. “Visitation alternatives need not be ideal; they need only be available,” the opinion stated. The New York Times wrote that the ruling was a sign of “how conservative [the court] is right now” since the departure of William Brennan Jr. and Thurgood Marshall.

The opinion was a blow to the plaintiffs, especially after their victories in lower courts. “It was a terrible decision,” said attorney Deborah LaBelle, who represented Bazzetta and the other women. “If your goal is to maintain a healthy safe correctional environment, the worst thing you can do is to sever family ties.” When preparing the case, she heard stories of men who were permanently banned from seeing kin because they stepped out of line to swallow their medication or drank fermented “spud juice”—both considered controlled substance violations.

Michigan corrections officials say the policy cuts down on contraband being smuggled into prisons and serves as a deterrent against drug use. “We share the same notion and believe that visitation is important … That’s why we haven’t done away with personal visits and gone to video visitation only,” said Chris Gautz, public information officer for the Michigan Department of Corrections. “That said, if they’re bringing drugs into the facility or drinking alcohol or stealing medication from mentally ill prisoners, there are consequences for that. Sadly, we have a number of prisoners who are choosing alcohol and drugs over their family.”

The 2003 court decision set a precedent for how far prisons can go to restrict visits and has since been cited multiple times to uphold a range of prison policies. “There’s really not a lot left of a constitutional right to visiting after that case,” said David Fathi, director of the ACLU National Prison Project. “This vital form of association … can be taken away pretty much at whim.” Since the ruling, other studies have reinforced the California corrections department’s findings from 1972: Visits reduce recidivism.

The Bazzetta case did result in some changes. Michigan children were allowed to see incarcerated family members other than their parents. And many of the plaintiffs who were banned from visits at the time of the Supreme Court decision had that restriction lifted.

But the underlying policy that Michigan prisoners can lose visits indefinitely for substance-abuse violations remains. It affected nearly 1,100 people in Michigan prisons in 2017, according to data obtained by The Marshall Project. That’s a 23 percent increase from 2016.

Inmates can now apply to have visits reinstated after one year and will often get them back if they haven’t received other significant disciplinary tickets. According to data, Michigan officials have been increasingly restoring visitation rights: 1,111 people won them back in 2017. Last year, officials also changed the policy to specify that the two violations have to occur within five years of each other. But the rule remains a pressing concern for Michigan families, especially as the opioid crisis finds it way into prisons.

In the decade since their son was incarcerated, Charles, 81, and Connie, 79, have spent over four of those years without seeing him in person. (The couple asked to use their middle names, for fear that speaking out against the department could keep them away from their son for even longer.) Before their son’s arrest, he was in and out of rehab trying to kick his addiction to the oxycodone his doctor had prescribed for back problems. In prison, he still struggles with severe pain. He’s lost his visits for being caught with Suboxone or refusing to take a drug test (the family says he has medical issues that makes it difficult for him to urinate on command).

Charles and Connie used to drive their camper van four hours north most weekends so they could see whether their son was healthy and staying clean. They estimated they visited more than 300 times. Now, they rely on daily phone calls. “We try to listen to how his voice sounds,” Connie said. “If there’s any kind of rehabilitation in the prison system, taking away visits isn’t right. It doesn’t matter what the offense is.”

They are part of a coalition fighting to change the system through legislation, after losing in the courts. “We have so many families who are devastated and feel there is no hope of knowing when they will see their loved one again,” said organizer Lois DeMott Pullano, who started the nonprofit Citizens for Prison Reform after her son was incarcerated. The group plans to draft a bill that would protect prisoners’ right to visits, and is hosting a “Legislative Day” in May to introduce lawmakers to the issue. “Legislators aren’t even aware of this. We just need to get in and educate,” she said. 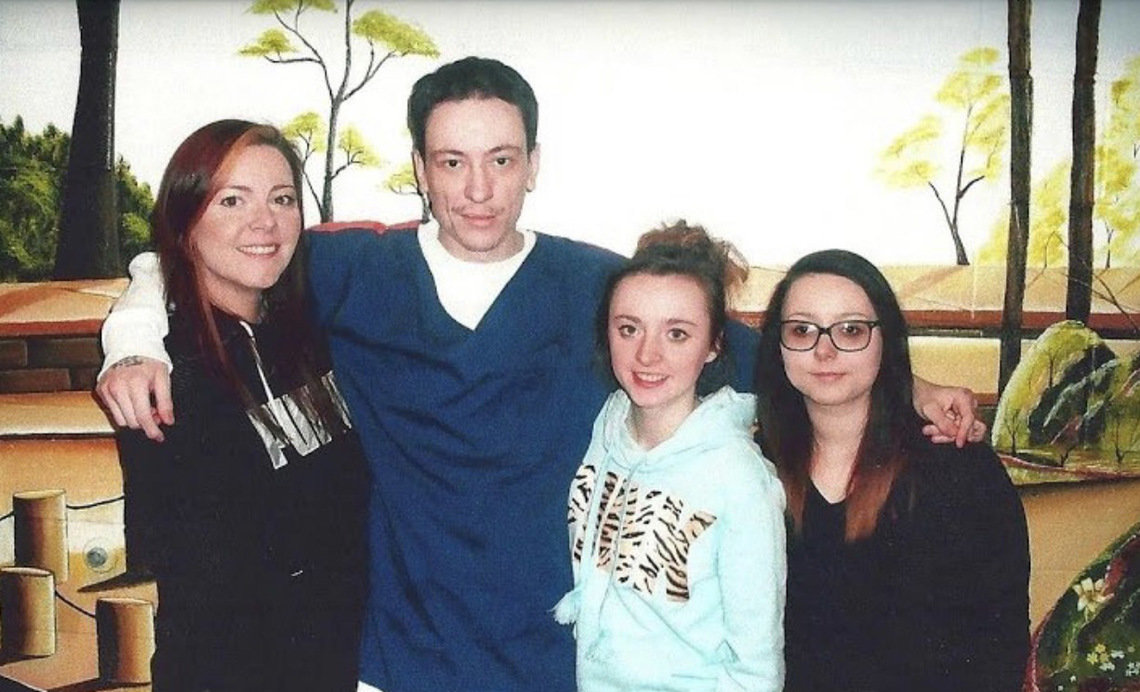 From left, Tiffany Walker with her siblings, Kenneth Robinson, Danni Franks and Shelbi Franks. Tiffany went almost five years without being able to visit her brother.

In the meantime, Pullano hears often from people who are blocked from seeing their loved ones inside: people like Tiffany Walker, who went almost five years without visiting her brother, Kenneth Robinson, even though he was housed in a prison only 45 minutes from her home. According to the family, Robinson had been caught twice failing to take his psychiatric medication, which the prison wrote up as a “substance abuse” violation for hoarding pills. (A FOIA request to the Department for disciplinary records was not fulfilled in time for publication.)

While he was isolated from his siblings, Walker said Robinson ended up in the hospital for attempting suicide and was criminally charged for spitting on a guard. “We’re his biggest support system. Had he had his visitation there’s a good chance none off that ever would have happened,” Walker said. Their visits have since been restored, and Robinson’s behavior has stabilized. “The inmates need that connection to reality and the outside world … the one thing keeping them grounded.”