How Fear Contributes to Cops' Use of Deadly Force

Police employ lethal violence in response to perceived threats at vastly different rates across the country. Racial bias is just one factor. 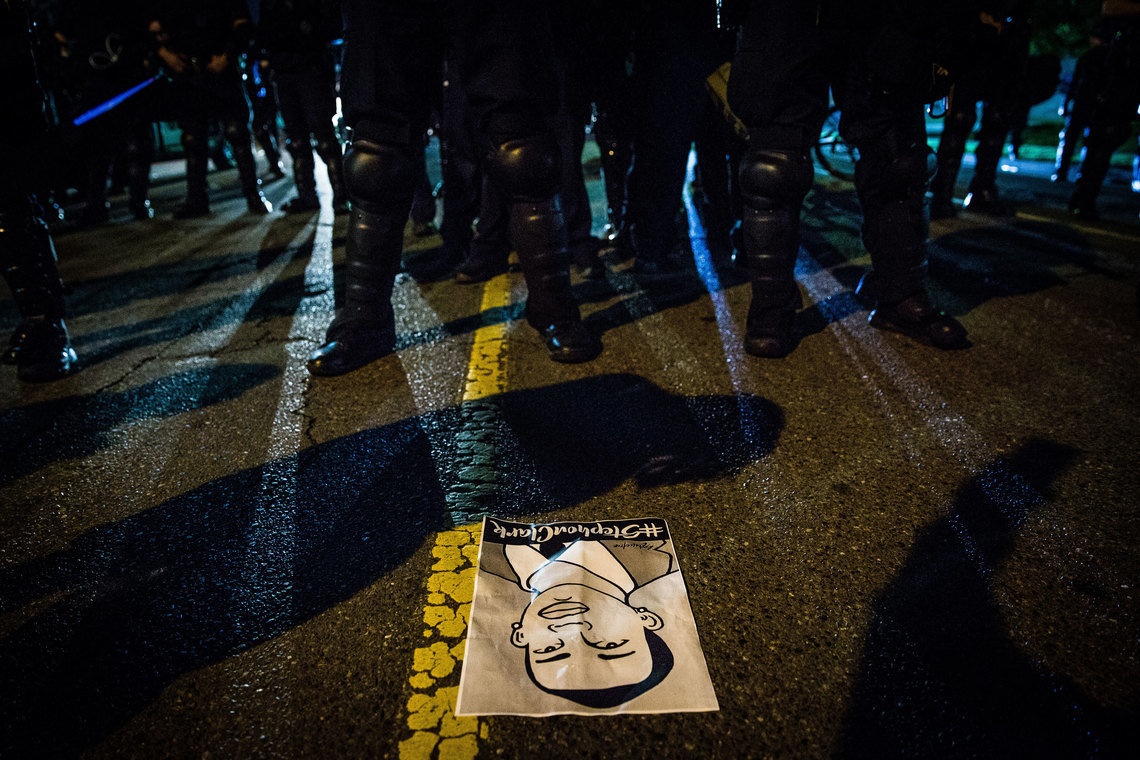 The police at a march in Sacramento, Calif., to protest the officer-involved shooting of Stephon Clark.

The fatal shootings of Willie McCoy by police in Vallejo, California in February, and of Stephon Clark in Sacramento last year have raised yet again the issue of racial bias in law enforcement. They should also focus attention on some staggering regional differences in the use of deadly force.

Police officers in the United States kill more than 1,000 civilians a year, while German and British police together kill about 10. Startling as such international comparisons are, there are also dramatic differences within the United States. Californians are four times more likely to face deadly force than residents of New York State, and residents of Arizona and New Mexico are eight times more likely to be killed by police than their counterparts in Connecticut.

Such extreme geographic variations suggest that selection, training, leadership and organizational culture have considerable impact on the way officers respond to perceived threats and defuse situations before they become threatening. Some powerful historical evidence supports this view.

During the summer of 1967, police and military resources were deployed on a large scale to quell civil disturbances in scores of American cities. In Newark and Detroit alone, more than 50 civilians were killed in less than a week. Many of the officers and guardsmen involved were young, inexperienced and unfamiliar with local conditions. They especially were afraid of sniper attacks, and this fear led to indiscriminate firing and multiple fatalities. According to the Kerner Commission report on the protests, “most reported sniping incidents were demonstrated to be gunfire by either police or National Guardsmen… The climate of fear and expectation of violence created by such exaggerated, sometimes totally erroneous, reports demonstrates the serious risks of overreaction and excessive use of force.”

In contrast with the jittery police and guardsmen, one section of Detroit was policed by professional soldiers, one-fifth of them black, under the command of General John L. Throckmorton. Recognizing that the city was “saturated with fear,” Throckmorton “felt that the major task of the troops was to… restore an air of normalcy.” Within hours of their arrival, “the area occupied by them was the quietest in the city,” the Kerner Commission found. The troops “had strict orders not to fire unless they could see the specific person at whom they were aiming,” and mass fire was forbidden. Over five days, Throckmorton’s troops expended about 200 rounds of ammunition, almost none of it after the first few hours. Meanwhile, in Newark, guardsmen and state police expended more than 3,000 rounds in three days.

These examples from the ‘60s provide a stark illustration of the fact that the objective threats officers face are not the only reasons for variations in their use of lethal force.

There is another important lesson to be learned from the summer of 1967: A climate of fear produces powerful incentives for preemptive killing. Those who are fearful are dangerous, and those who are seen as dangerous have reason to be afraid.

This link between fearsomeness and fearfulness can help us understand deadly violence more generally. People who live in areas where most homicides remain unsolved know they can be killed with impunity. As a result, they have strong incentives to kill preemptively. Their own fear makes them more feared by others and hence more likely to be killed. These cascading beliefs can result in very high homicide rates in some communities.

Breaking such cycles of violence calls for an increase in the rates at which homicides are solved, which depends heavily on witness cooperation. But witnesses are reluctant to come forward when they distrust or despise police. Strategies that involve generalized aggression, including stops and searches at low levels of suspicion, end up ensnaring and alienating large numbers of innocent people and severely damage police-community relations. Even as minor infractions get punished with greater certainty, major crimes requiring witness cooperation become harder to solve.

During the peak years of New York City’s stop-and-frisk policy, officers conducted more than half a million street stops annually. Recent research has shown that most of these stops were predictably unproductive—a much smaller and more carefully targeted use of the policy could have resulted in almost the same rates of weapon recovery. Indeed, the incidence of such stops is now at less than 2 percent of peak rates, even as the city’s murder rate has fallen to levels not seen since the 1950s. Similarly, in Oakland, murder rates have reached a two-decade low, on the heels of a concerted effort to prevent retaliatory killings and improve community relations.

Whether or not such changes can take root elsewhere remains an open question. But the variations across time and space teach us that policing is not an immutable form of American exceptionalism that we are destined to live with forever. In this there is a ray of hope, even in an otherwise bleak landscape.