The Underground Art of Prison Tattoos 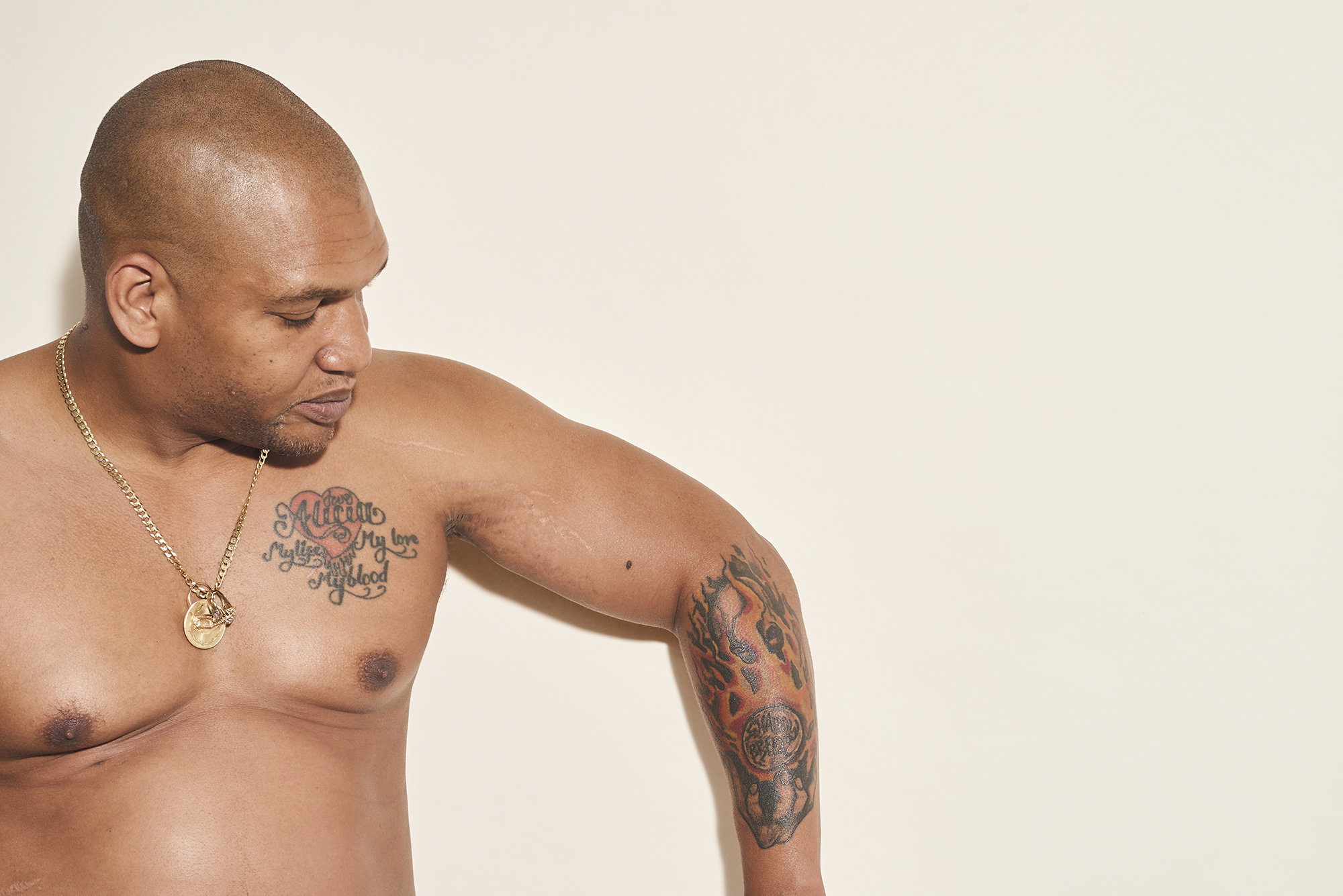 Khalid King, who got all but one of his tattoos while incarcerated.

Dan Grote spent the last week of his seven-year prison term getting tattooed.

Grote, 42, a prison teacher, had promised his students that if they passed their high school equivalency exams, he’d get a tattoo of their choice on his arms.

Almost all his students passed, and by the end of the week Grote’s arms were a melange of tattoo art that included prison towers and William Blake poems. Some of the students inked Grote themselves, using tattoo machines fashioned out of CD players, pen casings and guitar strings. Other students just drew the art.

“It was our way of saying thank you to each other,” said Grote, who left the Canaan federal prison in Pennsylvania two months ago after serving his sentence for a robbery.

From notorious tattoos, such as a filled-in teardrop that connotes a murderer, to the more heartfelt, including girlfriends’ names or wedding bands, prison tattoos are badges of inmates’ identities. “Some people want to look the part, some people actually do get them to illustrate their life story and some probably get them just because it's against the rules to get them done,” Grote said. “Not too different from in the world.”

But unlike those on the outside, prisoners must go to great—and often ingenious—lengths to get tattoos, using broken spoons and deodorant labels to create the foundation for tattoo machines and burnt ash for ink.

Body artists and the people who manufacture tattoo machines are highly respected by other inmates, but they are viewed warily by guards and corrections officials who say tattoos carry health risks. (Nobody in prison has access to a sterilized tattoo parlor.) As a result, inmates who are caught freshly inked or making tattoo machines can be disciplined and put into solitary confinement, sometimes for days.

Eric Glisson, 43, spent 17 years in Sing Sing making tattoo machines for extra money. The state paid Glisson about $6.50 every other week for various prison jobs. A tattoo machine, he said, sold for considerably more and could be made in a day.

“I could crank out about three machines a week, maybe one every other day, and charge $30 each,” he said. And in a place where a loaf of bread is 30 cents and the price of peanut butter or jam is the same, the sales meant Glisson could eat well.

In Reddit threads and YouTube videos, former inmates describe the painstaking task of making tattoo machines and colored ink. Prisoners take apart beard trimmers or CD players to get at the tiny motor, which they can adapt to make the tattoo needle go up and down quickly enough. (Tattoo artists who use beard trimmers can quickly put the shaver back on and trick guards searching for contraband.)

The needle itself is often made from a metal guitar string split in two by holding it over an open flame until it snaps in half, creating a fine point. The springs inside gel pens can also flatten into needles.

One former prisoner who now runs a tattoo shop said he used to make black ink by trapping soot in a milk carton placed over a burning pile of plastic razors or Bible pages. He would mix the leftover ash and soot with a bit of alcohol (for hygienic purposes). To get color, some inmates use liquid India ink that family members buy from arts and crafts stores.

An example of the kind of rudimentary tattoo rig used by prisoners, assembled with tape, a pen, a lighter, scissors, a battery, a motor, a guitar string and paper clips.
A guitar string slides through the body of a pen to become a needle. Paper clips form a platform for the motor.
A lighter heats up paper clips to fuse them to the plastic motor body.
The guitar string connects to the motor, and excess wire can be snipped.
Wires from the motor attach to each end of a battery.
Though banned in all prisons and jails, the tattoo gun is fully functional, if not sterile.

All prisons prohibit getting or giving a tattoo with a do-it-yourself machine, which are considered contraband. Corrections officials say shared needles can spread blood-borne diseases, such as HIV and Hepatitis C.

It’s not an unfounded concern: In interviews, former inmates said it was common to see multiple people tattooed with the same needle.

In 2005, a Centers for Disease Control report examined 88 males in Georgia’s prisons and found that half the men had contracted HIV from getting tattooed while incarcerated. To try to fix the problem, the province of Ontario, Canada, allowed prisons to set up tattoo parlors. (That program was cancelled, though, because of costs.)

But some prisons are relaxed about tattoo machines, said Manny Vargas, a former prison recreation therapist in California. Next to other contraband that prison guards have to look out for, such as drugs or handmade guns crafted from aerosol cans, cracking down on tattoo machines isn’t a high priority, he said.

“It’s kind of like, pick your poison,” he said.

Department of Corrections officials in New York wouldn’t discuss how people are disciplined if they are caught with tattoo machines, but said that “disciplinary sanctions” could happen.

“The prohibition on tattooing exists to preserve the health of incarcerated individuals and staff, as well as the security of the facility,” said Dee Johnson, assistant public information officer for the New York Department of Corrections, in a statement. 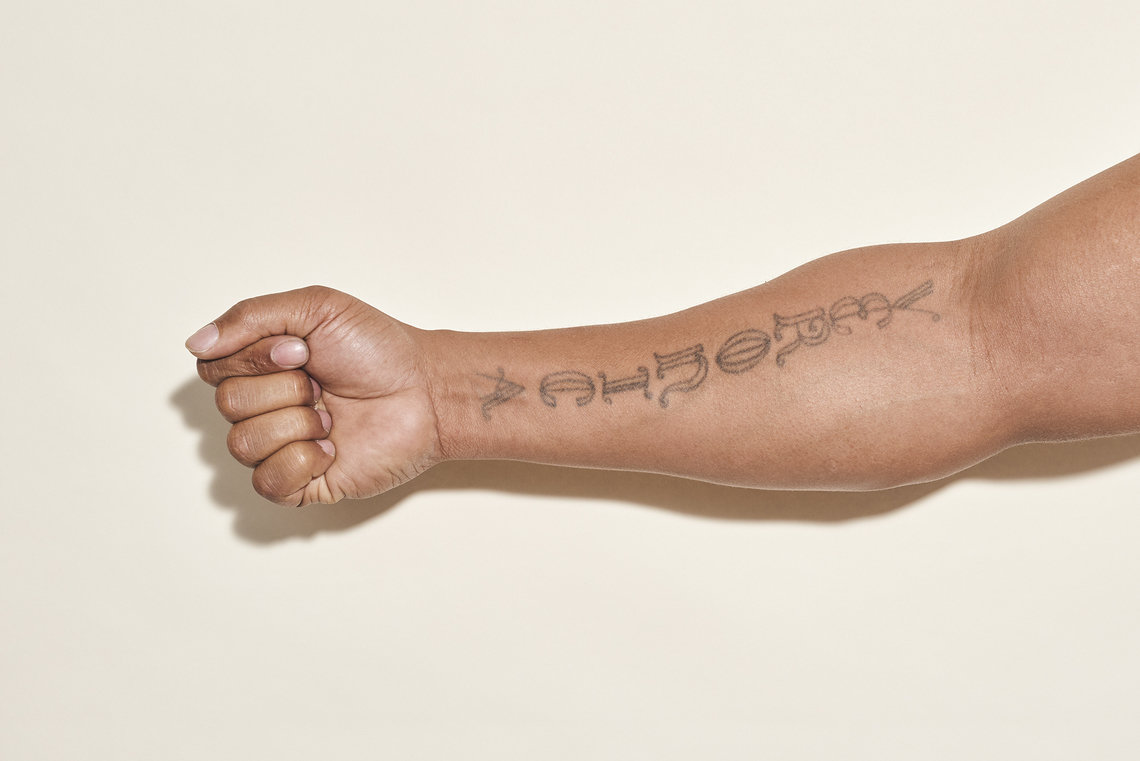 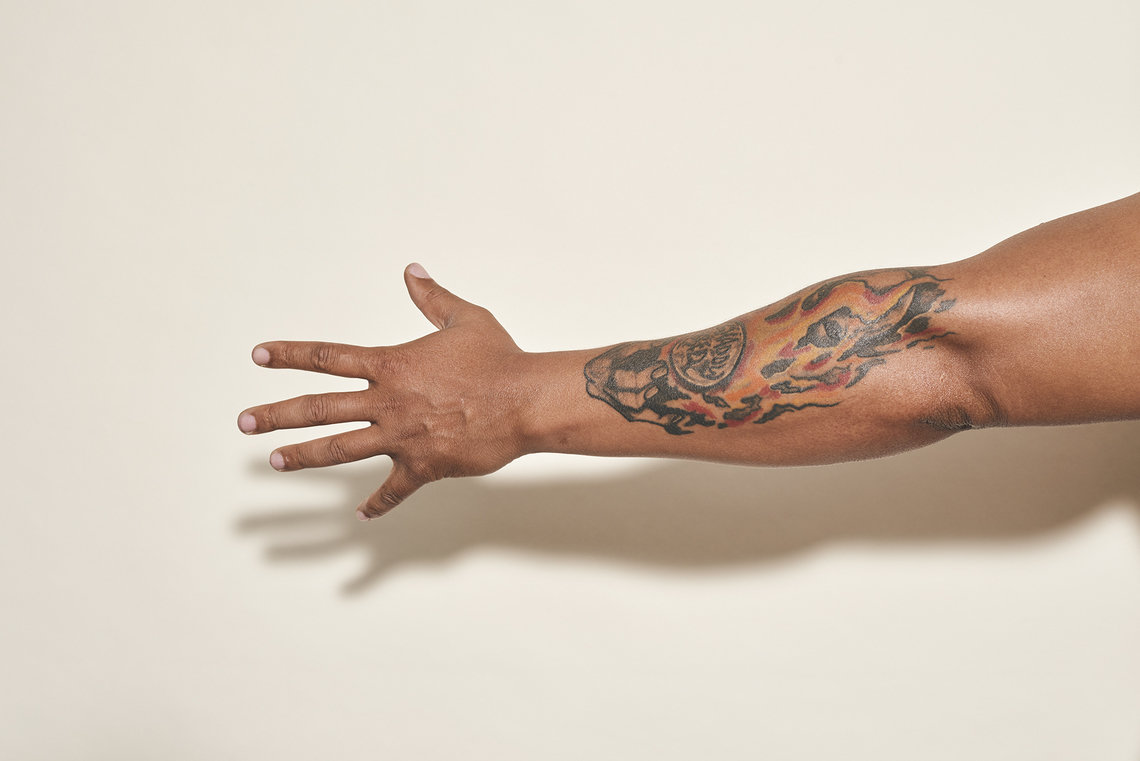 Khalid King tattooed his right arm with the name of his ex-girlfriend, Veronica, who said she would stick by his side while he was locked up. Aileen Son for The Marshall Project The tattoo on King's left arm shows a hand holding a crystal ball saying "Shadow Bred," because during his time in prison, he wanted to be in the shadows and not draw attention to himself. Aileen Son for The Marshall Project

Still, inmates often believe that tattoos are worth the risk.

Khalid King, 38, who served 11 years for a robbery and got five tattoos while incarcerated, described how he would play a kind of duck-and-run game with prison guards to avoid being caught with fresh tattoos. He’d stop going for food in the cafeteria for days and would even avoid the showers for about a week, he said.

For King and others, a tattoo can be used as a gift-giving ritual to loved ones on the outside. While at Rikers Island jail in New York City, he wanted to show his appreciation and love to a girlfriend who said she would stick by his side while he was locked up.

A tattoo was the only gift King could think of. So, he got his first tattoo—Veronica, his girlfriend’s name—done with a dressmaker pin.

The girlfriend is long gone, he said, but the significance of the tattoo stays with him.