A Couple That Crafts Together Stays Together

Jenny Jimenez and her husband, Jesse, who is incarcerated in Illinois, have found creative ways to show each other love, especially around Christmas. Puzzle filters, nail clippers and Lifetime original movies are involved.

By Jenny Jimenez as told to Beatrix Lockwood
Perspectives from those who work and live in the criminal justice system. Sign up to receive "Life Inside" emailed to you every week.

My husband, Jesse, has been back in prison since last January. He was released last Christmas Eve, hours before we were married, but we didn’t get to do much together during the weeks he was out. He had an ankle monitor, and he couldn't even use the upstairs bathroom without it going off because the parole agent hadn’t come by yet to give him movement. He couldn’t get back to work or begin his engineering classes. He would watch me out the window struggling with groceries and cleaning snow off the car and it began to wear on him.

The Marshall Project is partnering with The New York Times Race/Related newsletter to present a weeklong series on families of the incarcerated. This is the fourth of five parts. Read the previous parts about the hidden cost of incarceration, the long journeys undertaken to visit incarcerated loved ones and video visitation.

On Jan. 4, he cut his ankle monitor off in a fit of rage.

Knowing how frustrating it is to sit in a cell, I try to send him something in the mail every day, whether it’s a letter or a printout or something I've made. There's only one person in the mailroom for the prison, which has just over 2,000 people, so I’m determined to get ahead of the holiday rush.

Jesse and I have already started our 12 days of Christmas. I've been making gift tags for each of the 12 days and taking pictures of myself wearing them on different outfits. He makes me drawings of the partridge in the pear tree and other gifts from the song and sends them to me. He's a really talented artist. I laminate those and use them to decorate the garland in my living room.

Sometimes the prison challenges our holiday cheer. For instance, Jesse spent weeks decorating a T-shirt he bought from the commissary, with little turtle doves and hearts. He was making a Christmas pajama shirt for me. But they confiscated it because they said he was using it to send me “a message.” 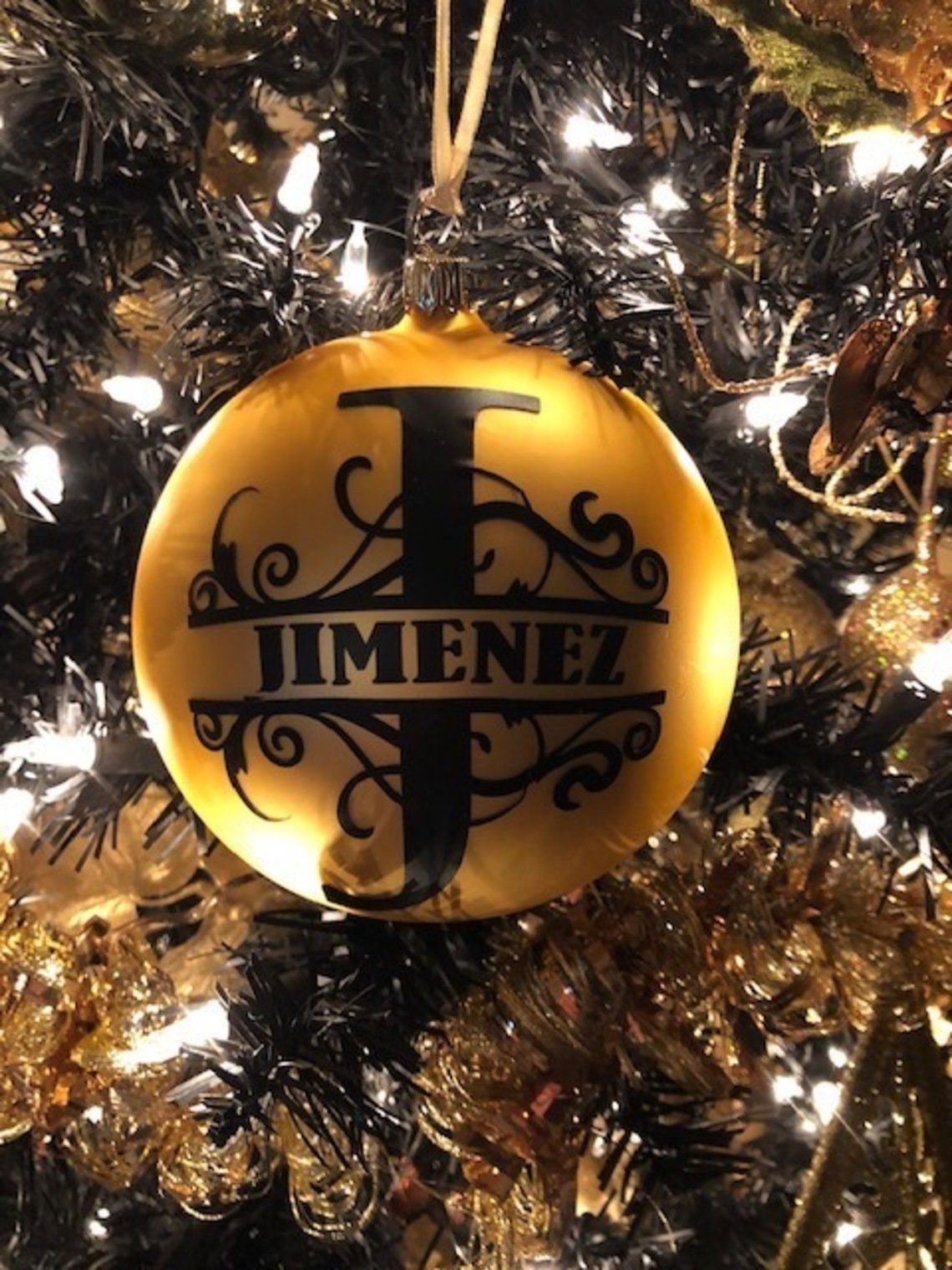 Jenny Jimenez sent photos of Christmas ornaments she had made to her husband in prison, so he could tape them to a 3-D tree that she mailed to him one section at a time.

I sent him a picture of my Christmas tree, but it was sent back. They said it was gang-related because of the five-pointed star at the top. "No stars," they said. So I've been getting really creative. I learned to use this Silhouette machine to make these cutout Christmas trees that I send him, one at a time. Once he gets them all, they'll go together and make a 3-D tree. I sent him little pictures of all the ornaments on my tree so he can tape them to his 3-D version. He uses nail clippers to cut around the edges and make little round ornaments. They have these little circular indentations around them because of the shape of the nail clippers; he's not allowed to have scissors.

My latest project is a Shutterfly book for the 12 days of Christmas that when you flip through it, it moves. I put a puzzle filter over a photo of me where he can see my cleavage and the new “Mrs. Jimenez” tattoo I got on my chest. I sent it on nine different days so he could put the puzzle together and get a little surprise.

Jesse and I have always been different. After he ripped off his ankle monitor last year, we screamed and cried, but the damage had already been done. So we decided to take a road trip together before he had to go back to prison. We would go to Nashville to hear country music, and then to Memphis to see Graceland. We booked an Elvis-themed room and everything. It would be our honeymoon. Then, we were going to go to turn him in. We were on our way to Memphis when a police car pulled us over for speeding. When we stopped, we looked at each other knowingly.

“Can you get away?” I asked. Then I said, “Go!” We took off. They chased us for what felt like an eternity.

Then the crash happened.

We were in the same ambulance together. I was screaming like a banshee in pain, holding on tight to him, handcuffed to the bed next to me. He kissed my hand before I was airlifted to the hospital with a spinal cord injury.

They took Jesse to a different hospital, and I didn't have my phone. He kept calling for days. He was so worried about me, and I was worried about him. Neither of us knew the extent of each other's injuries.

Later, someone brought my purse in from the wreckage. It was about a week from the day of the crash before I was able to pick up his call.

Now that Jesse is back in prison we communicate as much as we can, but it's really hard. Earlier this year, they suspended my visits. I got a letter saying I falsified information on the form. Turns out there was a woman in the system who had the same name as me, and when she came up in the system with a different birthday, they cut off my visits for four months.

We haven't been able to do video visits, either, because the terminals in the prison are broken. Recently, our phone calls have also been cut from 30 minutes to 20 minutes. It's only 10 minutes less, but that’s all we have, so it feels so much longer.

Another way we stay connected is to watch TV together—our date nights. It helps us feel close knowing that we're both watching the same thing at the same time. I ripped out the list of all the holiday Lifetime movies they've been playing from a magazine, and I circled the ones I want to watch. He also picked out some of the ones he wanted to watch, and he sent it back to me. Each week we sit down and watch them at the same time. He watches them on a TV in his cell, and I watch them in my living room. I send him e-mails as we watch.

He doesn’t see the messages right away because he has to check his e-mail on a barely functional tablet. But I'll still just send whatever comes to mind, silly things like, "Wow, look at her dress." Even if he doesn't get it for days, he'll know I was there watching with him. The limited communication has been one of the hardest things to get used to. I want him to know I am always here, no matter what.

Jesse can be so tough, but he has a heart of gold. It’s difficult being in that horrible, egotistical environment. I think that without our communication, he wouldn’t be such a divine, loving man anymore. He would become institutionalized and depressed.

Admittedly, I flood the mailroom with letters, cards and books. But I want him to get something every time they do pass-out at the prison. He’ll always be reminded that he is loved and not forgotten.

Jesse’s release is scheduled for next December. When he gets out, we’re going to finally have our big wedding ceremony. I just booked the venue—for Christmas Eve.

Jenny Jimenez is a wife, mother and pastry chef living in the Chicago area.

The Illinois Department of Corrections did not respond to multiple requests for comment.